Once upon a time…

A man named Kevin Vermaak travelled to Costa Rica and participated in a multi-stage mountain bike race. On his return to South Africa, he was inspired to create the biggest mountain bike race in the world, and after two years of planning, an 8-day two-person stage race evolved and was dubbed the Cape Epic. The untamed African mountain bike race is a self-sufficient mobile home, catering for 1262 competitors and 1800 support crew, selling out in just 30 seconds this year. Kevin’s unbelievable dream has without a doubt evolved into reality.

The truth is I can barely write about my experience at the Epic without getting emotional. The race is hard on the legs, but it’s harder on the soul, and there is no way that a 5-minute YouTube clip or race report can help you to envisage it. But here goes anyway: A Day at the Absa Cape Epic.

If you managed to sleep through the sound of musical port-a-loos, you would then wake in your tent at 5am to a man playing bagpipes. You attend breakfast in a massive tent with good food on offer, before locating your bike in the secure bike park. You then get dressed in your tent with head-torch assistance; layer up with sunscreen, gels and chamois cream, before opening your tent to witness the sun beginning to wake for the day. You move into your allocated start chute where you wait for 20minutes before the gun fires and you are racing.

You race on the limit for 3hrs before giving up, then you race another 2hrs before you ‘bonk’ for the day and hit survival mode and if you are unlucky like I was, you will have to sprint to the finish. Your bum is chaffed, your hands cramping, your feet are swollen from the heat and after all that walking they’re also full of sand. You’re dehydrated but the thought of drinking nearly hurts your stomach from the after affect of gels, and that first trip to the port-a-loo is never a nice one.

You retreat to the Rider Chill Zone with beanbags, wi-fi and icy-poles, and maybe have an ice-bath because it’s hot rather than for recovery purposes. You eat and drink all day but not due to hunger, before attending dinner and presentations where you will listen to the same four songs they have played all week before heading to bed, knowing that you have to do it all again for another 6 days.

My honest opinion is that you can’t prepare for the Epic. As fit as I am, by day five it was like the race had peeled back my first two layers and all I had left was raw emotion and vulnerability. That night I caught a stomach bug and my body decided to give up. At that point I couldn’t picture crossing the finish line and it was only through my partner Jarrod that I stayed strong.

But I had it good. One man had crashed and received 30 stiches on the inside and outside of his calve, but he finished. Another team had a rider with one arm, and his partner had just one leg and they finished. For god sakes the tandem finished… If I couldn’t finish with a stomach bug then I was going to get a hook and a nail and hang the bike up when I got home! 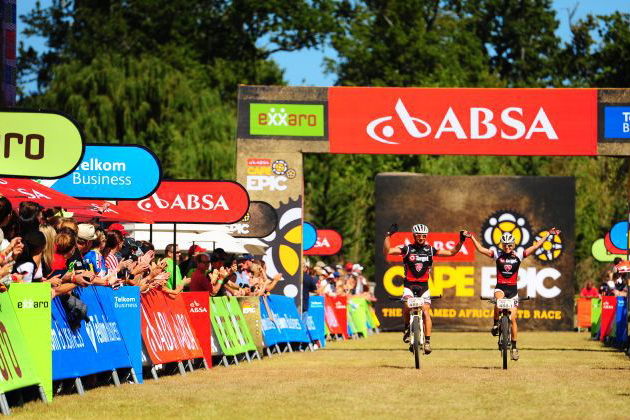 When I crossed the finish line for the final time I felt nothing. Not happiness, relief or liberation. It sounds like a harsh reality, but I had no will power left to enjoy the spoils of finishing. I reflect on it now and brag to myself at how bloody amazing I am, and every other one of the 1086 competitors to cross that line in Lourensford that day.

Will I race it again? I think that I will. The struggles and adversities of this race are what make it so special. Eventually the painful visions I have will re-form into amazing memories of picturesque wineries and contoured mountains and I will want to come back and re-live the adventures of the ‘human spirit’.