We always dream about journeys to places like this, but for most mortals these reveries rarely become a reality. When it was decided that a group of us would spend seven days on the roads and trails of New Zealand’s South Island, hovering largely around the Craigieburn and then Nelson area, most of us were in disbelief until the moment we landed on Kiwi soil. 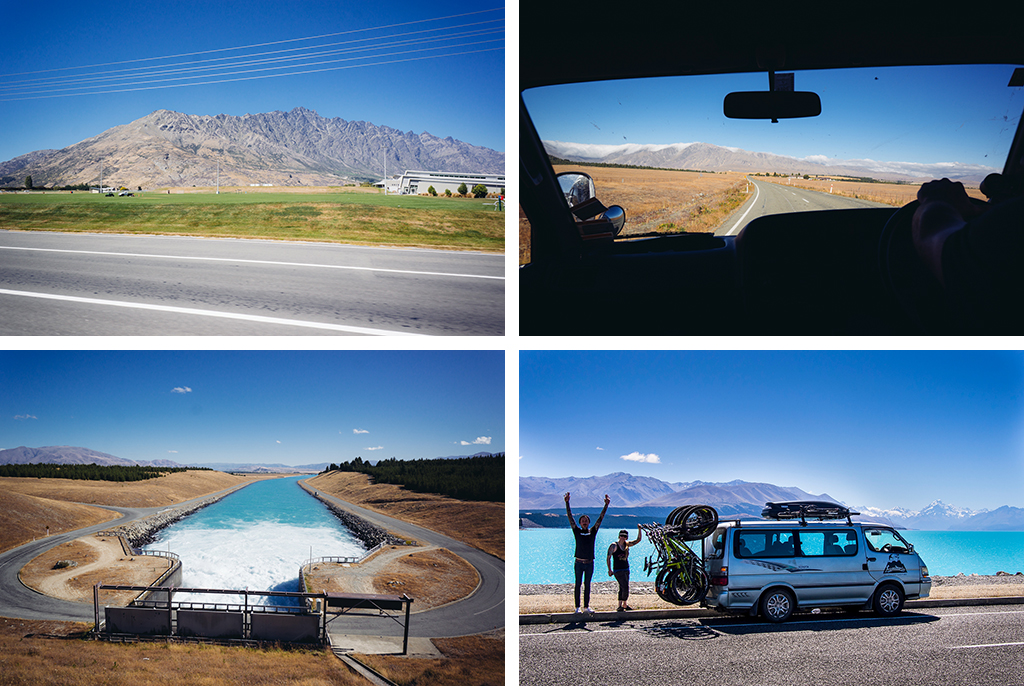 Picture yourself: pinned, silently drifting, surfing and jumping along some of the finest singletrack you have ever touched. The only audible sounds are of beech leaves heaving off pristine trail as tires smash its corners, take-offs and straight-shots. The humidity hanging in the air from the nearby Tasman Sea blows off your face, shoulders and hands as if it had never existed at all. This is perfection. This is New Zealand. 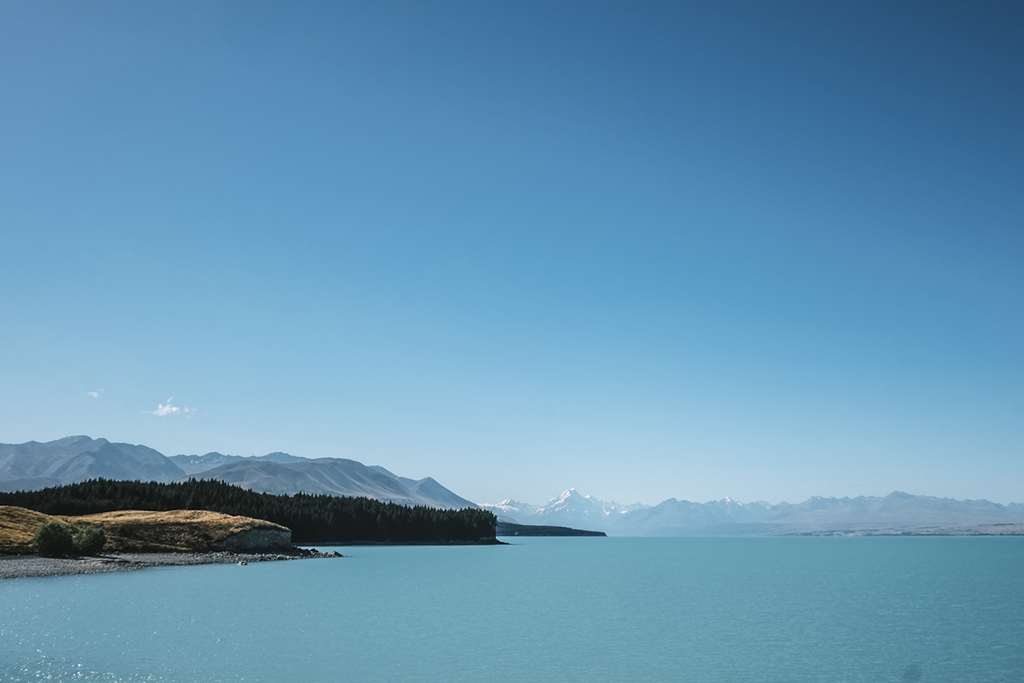 After a few days of crushing hot laps in the Queenstown Bike Park, our crew stuffed itself aboard the HouseMartin van and a relic we’d picked up from a local rental outfit in town. Our rig read 350,000 kilometers on the odometer and was the third and final installment of vehicles we “tested” before leaving town. New Zealand is such a massive hub for backpackers and long-haul travellers that we couldn’t help but imagine the tales our pewter 10 passenger van, bikes in tow, had to tell under its remarkably intact exterior. Manual transmission, right hand drive, questionable high-speed shudders and all, old reliable “kept ‘er pinned” throughout our journey; up and down shuttle roads, along the highways of New Zealand’s south island and all the way to the “top” (of the island) to Nelson. This van was a clear winner – and proved to be so as we watched Anka and Sven battle with periodic stops to pump a perpetually slow leaking tire of the HouseMartin van on our way up north. 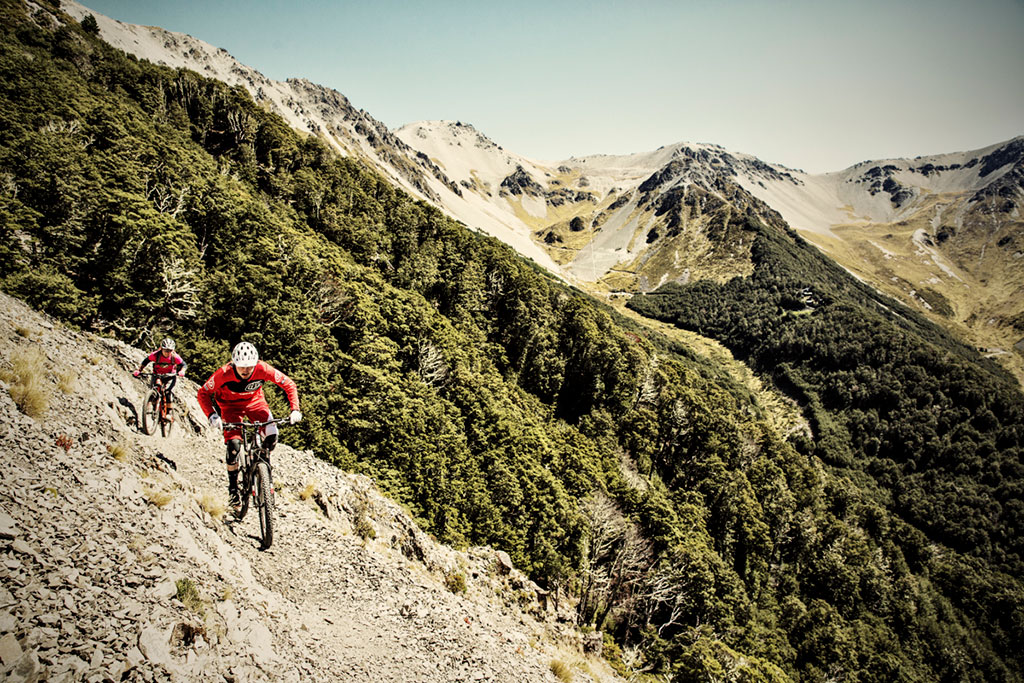 We arrived in our quaint accommodations in the Craigieburn Range after driving nearly 7 hours past countless mind-blowing vistas. The plan was to ride up to the legendary Craigieburn Ski Field in the morning and to the descent of the adjacent Mt. Cheesman, about 16km down the road, in the afternoon. The crack of dawn came early and we all mobilized for what we knew would be a big day. The pedal up to Craigieburn, via the Craigieburn Valley Ski Field Road, proved to be reasonable, and everyone chatted and threw around jokes on the way up. The 7-kilometer ascent toured us past Craigieburn’s winter accommodations and ticket windows, complete with “tow prices” ($50/day NZ for club members), all left in solitude to sleep for the summer. When we arrived at the top of our climb, the forest canopy parted and we were met with the panorama of an open scree-filled alpine bowl, complete with dozens of avalanche start zones and a couple of precariously placed tow lifts down the center of the terrain. Sven pointed out our route of travel: a skinny looking piece of benched singletrack that meandered along the alpine bowl in and out of forested areas and back into the heart of the valley we had just climbed out of. 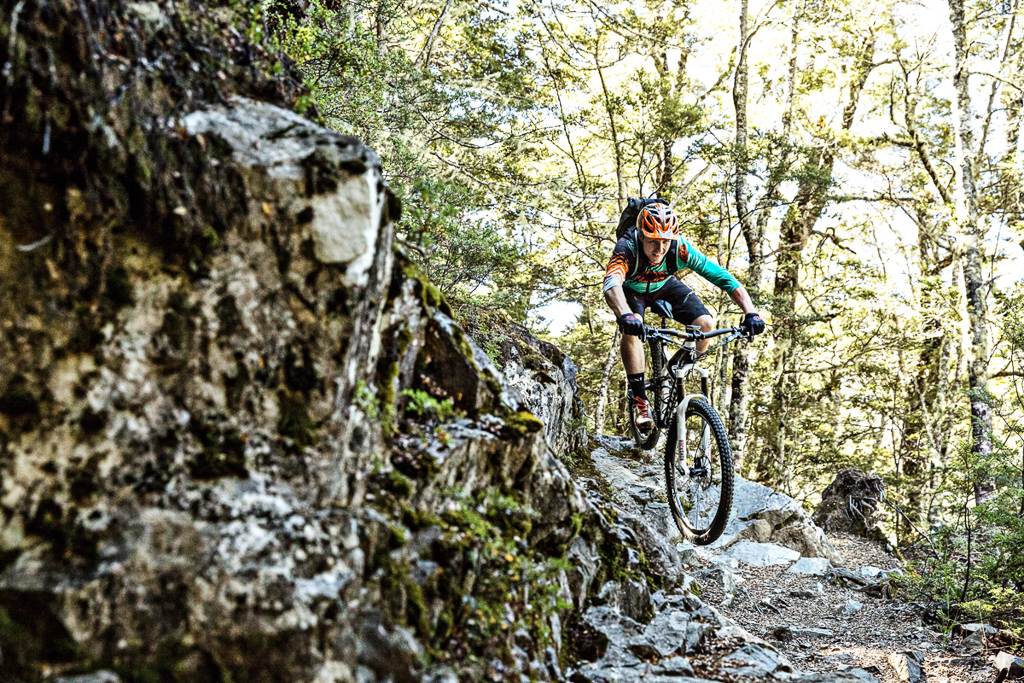 The ride down from Craigieburn was everything a person with a bike could ask for. Technical, rocky traverses coupled with rooty sections that could be blasted over. New Zealand is a country so small, half of it could be crossed in 7 hours by our old-timer van, yet it felt so enormous that the terrain we encountered at each stop was so different from the day before it felt like another planet entirely. We were told that this descent takes most riders about a half an hour to ride in full at a reasonable pace, and it was clear that the pedal we did to get here would have been worth doing over and over again, had there been the time we needed. It was time to move on to Mount Cheesman. 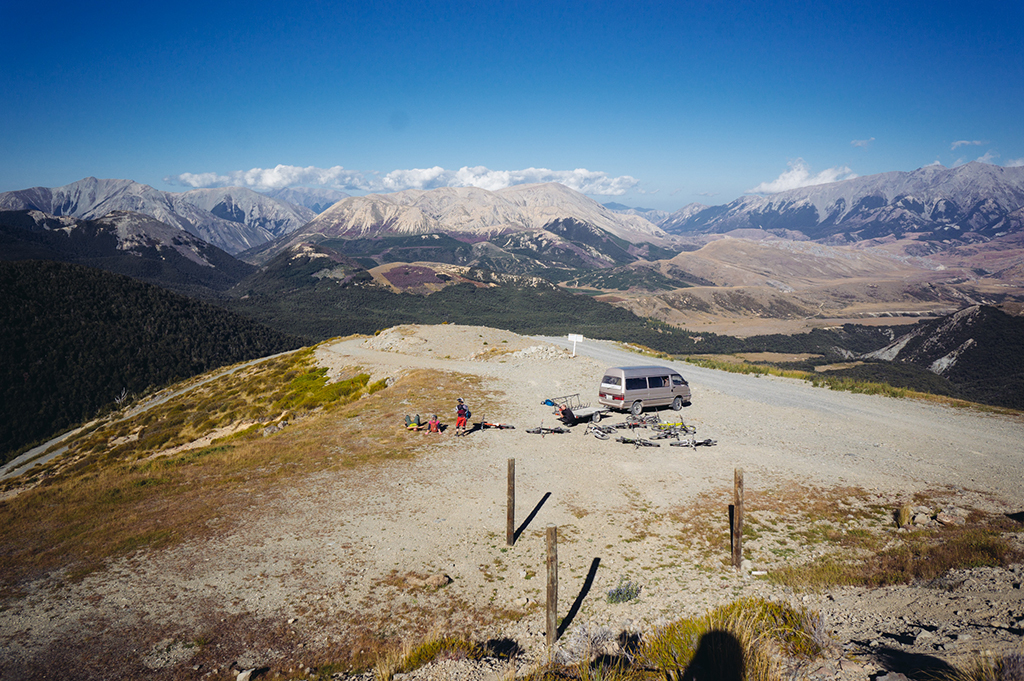 By the time our van chugged itself to the drop-off spot along the Mt Cheesman Ski Field Road, the sun was in the process of shutting down for the evening. We stood atop a view unlike anything we’d seen yet in New Zealand, and we took the time to appreciate the place where we stood. Once riding, we dropped into a few hundred meters of incredible alpine singletrack through tussock grasses, jumps and corners. We continued on to “Ride The Line” just as we saw the sun drop behind the mountain in our peripheral. The dimly lit trail ahead of us dropped virtually straight down the fall line and through the haunting-looking vegetation of the mountain beech (or “tawhairauriki” in Maori) forest we were in. When we weren’t hanging on through the chutes of Ride the Line with full trust our brakes, we were making pointed attempts to open up and look for speed in the places where it felt like we could get away with it. As the group spread out, we could hear each other yelling and shouting with disbelief and utter elation. It was hard to imagine that we could have stepped up the excellence of the terrain we rode earlier that day, but we were getting used to being surprised. 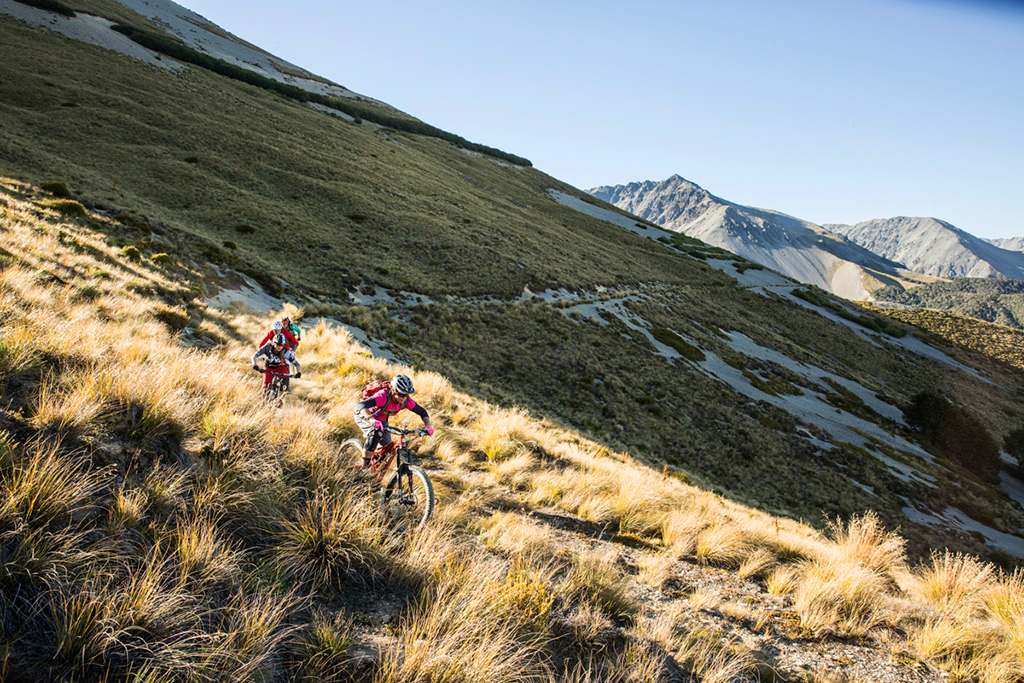 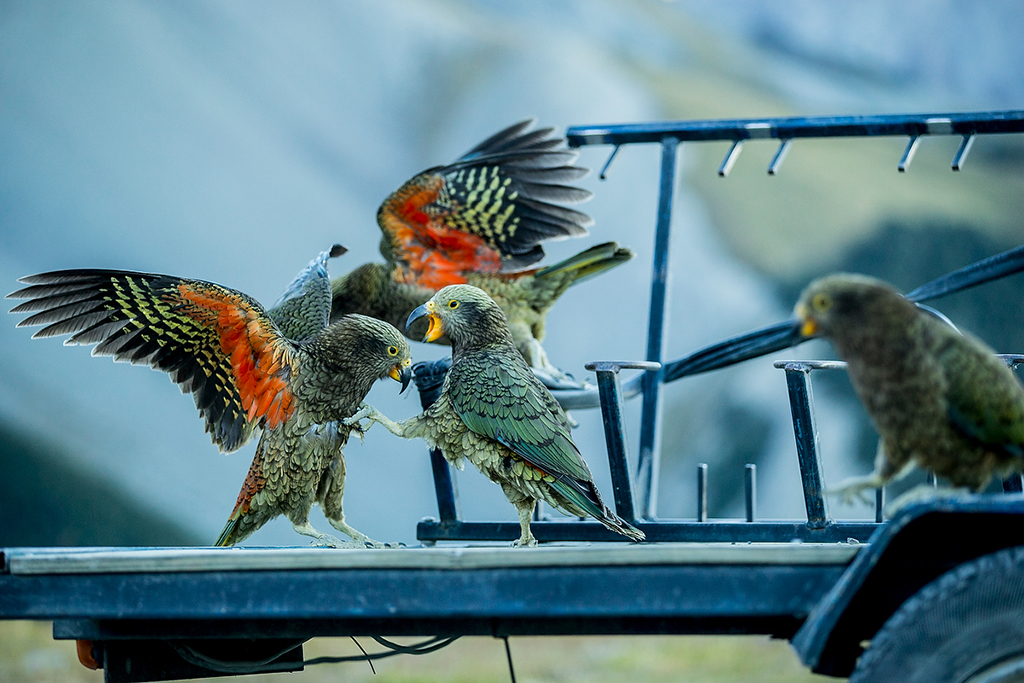 We travelled north and then west along the West Coast Road in the dark; stopping only to drink beer and eat sandwiches sourced by Anka and Sven in a late night café…visit…in Arthur’s Pass. Canterbury was behind us and the West Coast region crept into our senses: the humidity in the air and the scent of the nearby beaches of the Tasman felt overpowering when we arrived late at night in the small town of Punakaiki. The next morning reared its head with the brightest sun and we found ourselves in cabins nestled within a jungle.

A short visit to Punakaiki’s Pancake Rocks and a wicked refuel session at a local café put us back on the road as the HouseMartin van’s tire became more beleaguered; we were able to take more frequent photo opportunities while the floor pump was put back to work. State highway 6 delivered us north and then east to Nelson, and the 5-hour drive gave us all a chance to relax, share a few more tall stories and check out the views out the window. 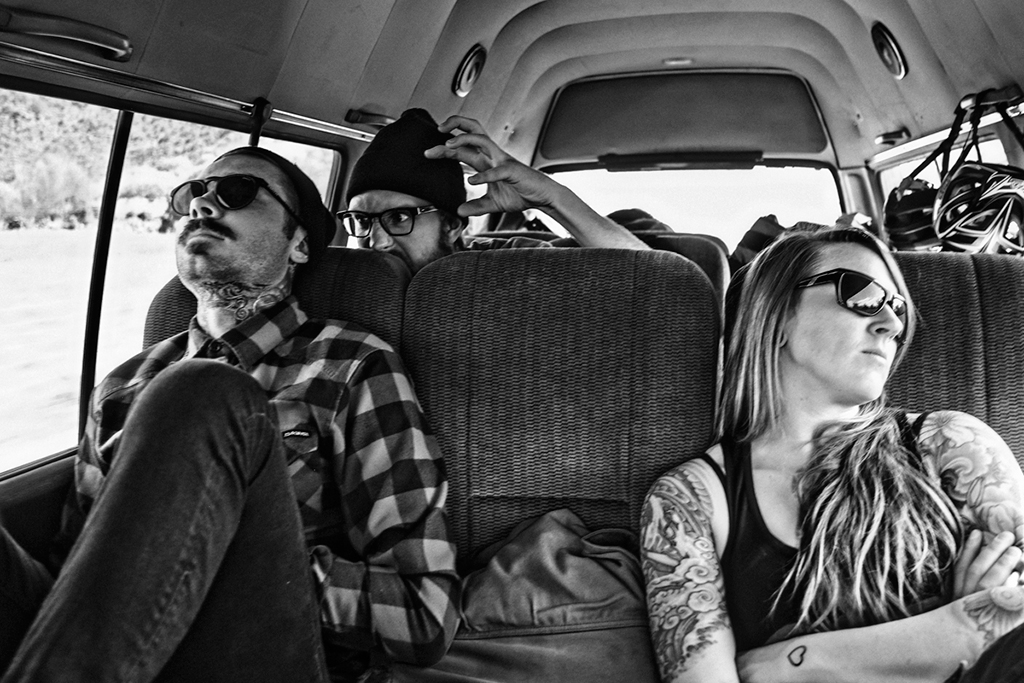 Nelson was more than fit to be the final destination for our adventure. We settled into a house perched high on the hill overlooking Nelson and the Tasman coast. Duncan made a single attempt to run along the 14% (and higher) gradient roads that accessed where we were and the sense of newness and excitement over things yet unseen hit our crew once again. As a small port city, Nelson has an international feel that so many towns around the world are missing. Its streets are lined with amazing restaurants, bars and cafes and it has the downtown feel of a tiny, cultured metropolis.

HouseMartin got the vans and the arrangements in order to shuttle us all up to a local trail on top of Fringed Hill outside of (and overlooking) town the day after we arrived. This is one of Anka’s favorite “after work” rides, and while the challenge of getting to the actual trailhead was something we hadn’t yet experienced while in New Zealand, we were met with the usual stand-out singletrack we had grown accustomed to being introduced to. It was such a contrast from the terrain we’d seen in Queenstown and in Craigieburn, though: this trail had an older forest and gnarled roots everywhere. As Anka and Sven celebrated being back on their local trails, the rest of us awkwardly adjusted to riding over inconsistent roots and rocks and ups and downs; some of us met with the ground more than once, but still found a way to appreciate what this trail had to offer all the way to the Matai Valley. 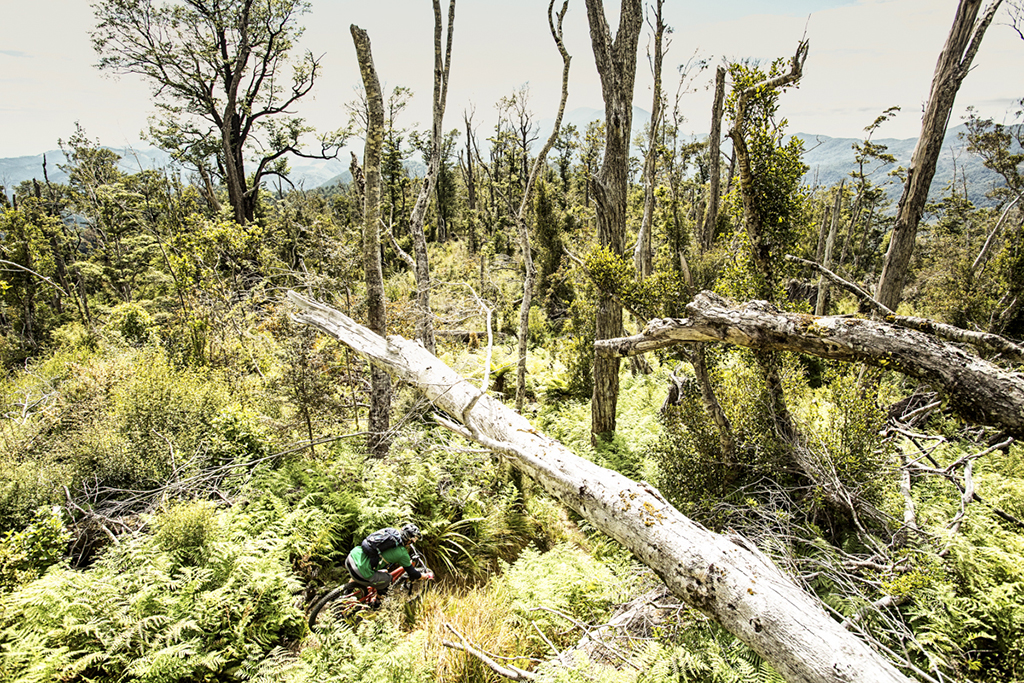 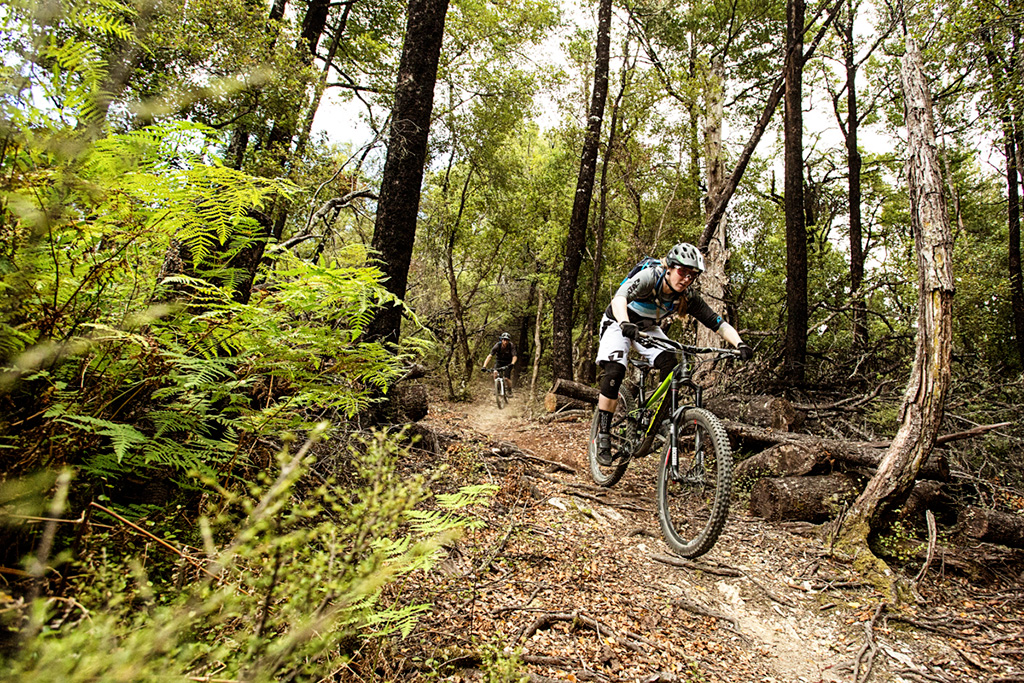 It was our final day in Nelson and HouseMartin chose to lead us out with a bang by booking a helicopter to access a trail that would otherwise take a few hours to get to by bike in the Richmond Mountain Ranges. We drove northeast out of Nelson and into the mountains again, along a dirt road and we parked at our “landing zone” in a quiet little campground along a river. This is also where we would end our day. As our pilot skillfully flew our group over a couple of trips to our starting point, we had the opportunity to experience the vastness of this region in New Zealand, bordering between the Marlborough and Nelson regions of the country, from above. As we waved goodbye to the heli, we all sprinted into the unknown of the trail ahead of us with an anticipation that had been fed by the immaculate network of trails we’d seen thus far. This…this was even better. 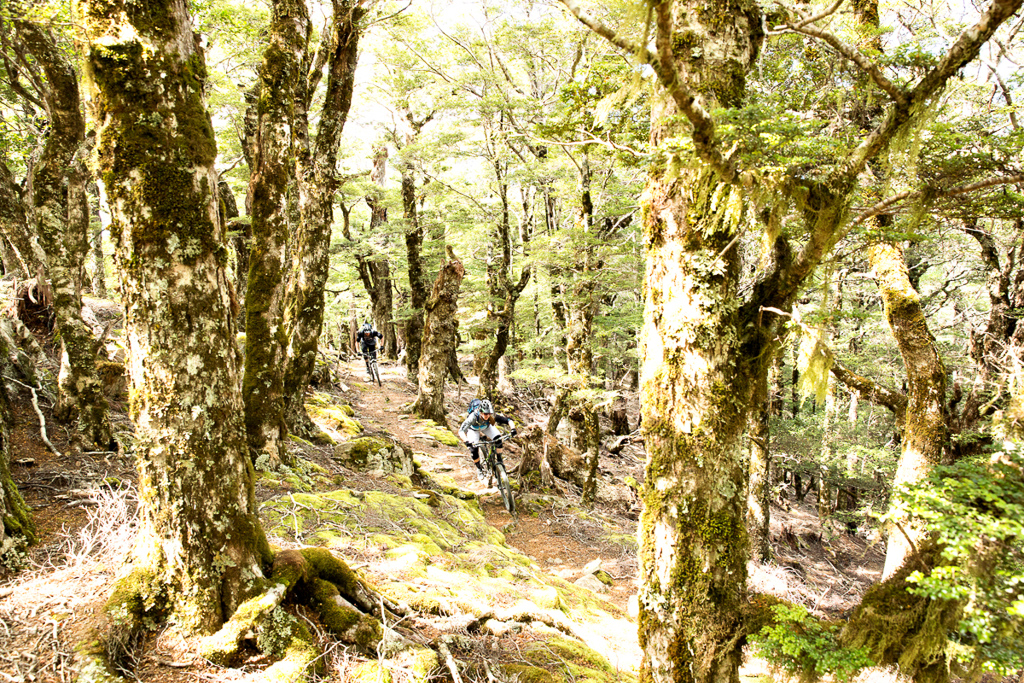 The first few kilometers of the trail were high speed, benched and wide, with deep beech leaves spread everywhere. We were teased initially with this descent, as we soon began onto rolling climbs that graduated to full hike-a-bike terrain within a short distance. A short, but significant, burst of climbing landed us to “the top” of the trail according to Sven and Anka. We stopped for lunch and took for granted what we were about to ride. We were partially covered by forest canopy at this point and we sat along rocky outcroppings. It was hard to tell what we were about to ride. The singletrack further on was open and ripping, including root jumps and naturally bermed corners throughout. The beech leaves lay in piles along the trail and robbed us of just enough grip to fear the drifts we were getting into just as tires would regain forward traction to carry on. This was pure bliss. 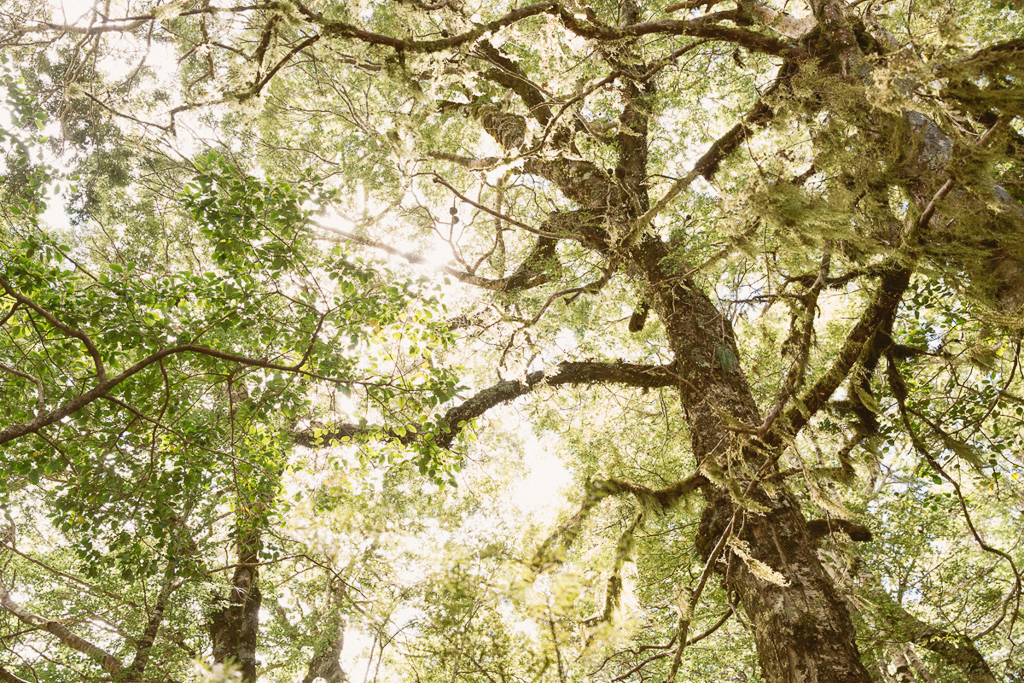 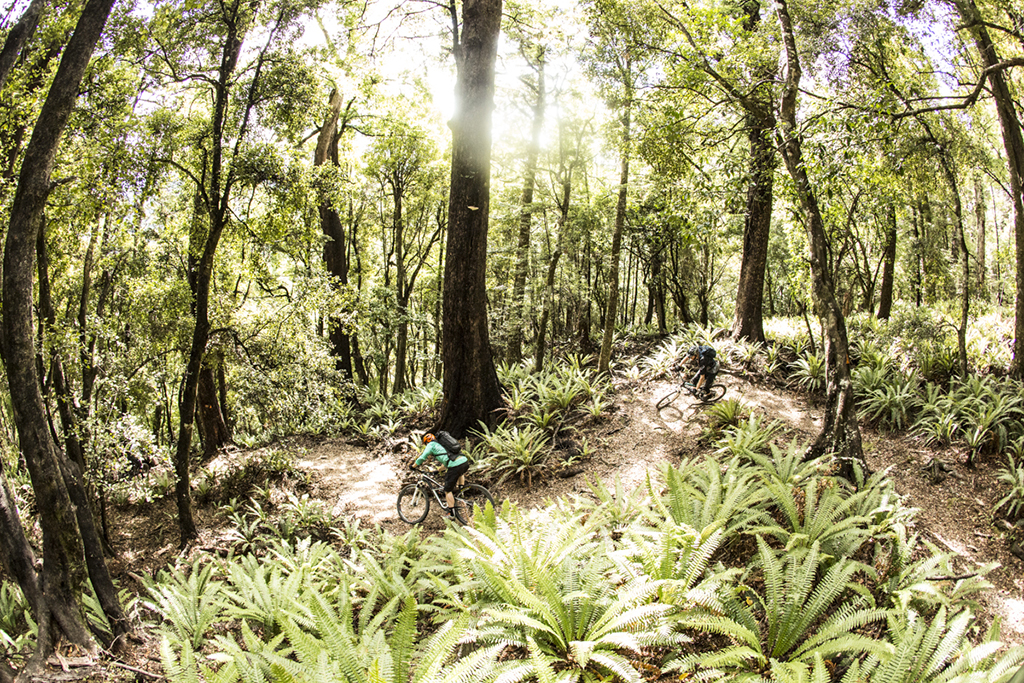 Our ride out on that final day sent us along a rolling 45-minute traverse to land us back to the old pewter relic and to a thoughtfully assembled BBQ, courtesy of HouseMartin. We regaled stories of our day – our near misses, triumphs and laughs. There was a sense, also, that we were all about to lose something, despite everything we had gained. This had been a perfect adventure through the Otago, Canterbury, West Coast, Nelson and Marlborough regions of New Zealand. We were all healthy, happy and had finished our week long affair with a fundamental appreciation of the absolute splendor of the country. It was cold and snowy in North America. Wait…why were we leaving again? We had barely scratched the surface of what New Zealand has to offer as a mountain biking destination. Sven and Anka of HouseMartin had meticulously designed a trip that brought us to as many heavy-hitting trails as we could access in a limited period of time. When it came time to say goodbye to our favorite South African buddies, we all felt a sense of appreciation and simultaneous sadness for having seen so little, while managing to cover so much ground. We would be back, and next time for longer; there was no doubt in anyone’s mind. The question was…could it come soon enough?