Few people would debate that mountain biking has moved into the mainstream. But as the sport gets bigger, it becomes ever more important to stop and take a look at where we're heading, and how we might go about getting there.

The second annual Australian Mountain Bike Summit will take place at Mount Buller on 7-8 December 2015, and some of the Australian cycling industry’s key figures will be there for two days of presentations, workshops, discussion and a little bit of riding too. It’s all about pooling knowledge and experience to get a clear idea of how mountain biking looks now, and will look in the future, from various perspectives: trail access, retailing, technology, women in mountain biking, racing, media and more.

Ahead of the Summit, we grabbed four of the key presenters to ask them a few questions about their personal experiences, opportunities and challenges. For more information about the Australian Mountain Bike Summit, or to register, head to http://bike.mtbuller.com.au/summit.php 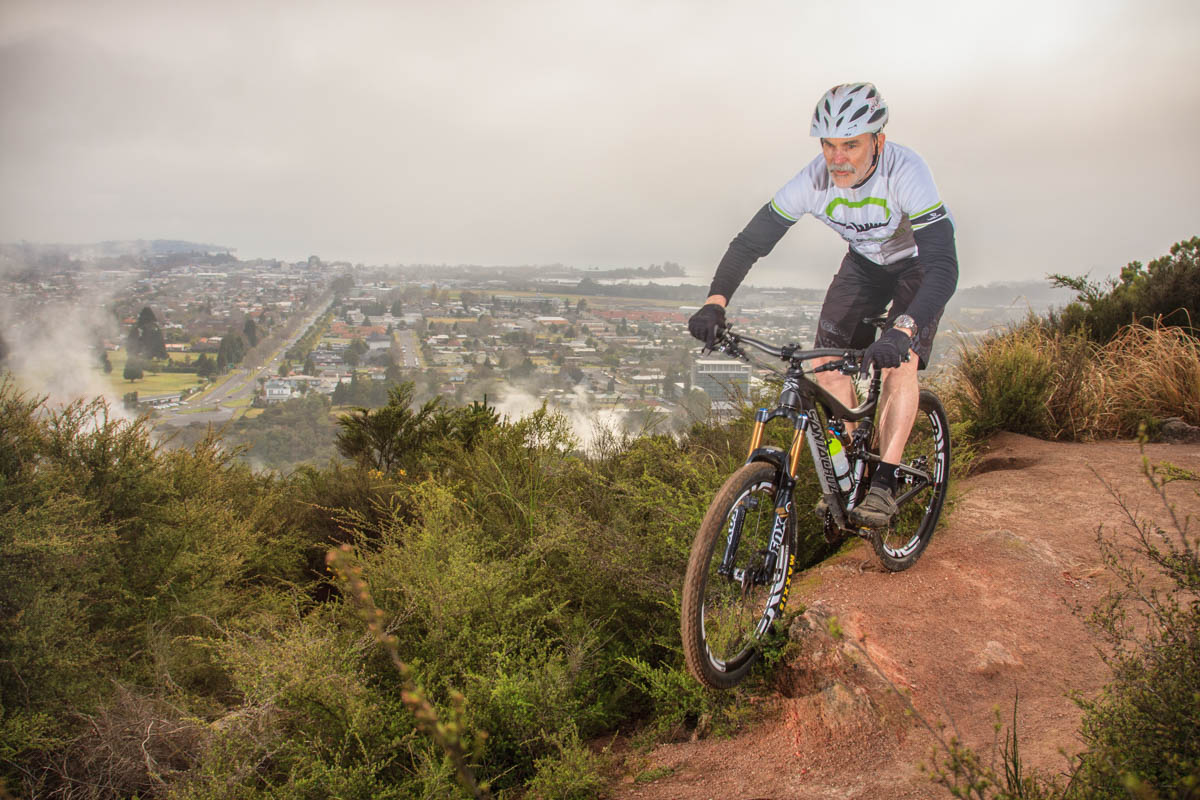 All visitors who respect the environment are warmly welcomed.

Dave Donaldson is the Deputy Mayor of Rotorua, New Zealand and has been one of the driving forces behind the rise of Rotorua to international mountain bike prominence. When it comes to developing and promoting a world class mountain bike destination, he knows it all.

With so many riders from around the globe flocking to Rotorua, has ‘localism’ ever been an issue with the trails, and if so, how is it handled?

The only issue of ‘possessiveness’ with the trails has been the occasional flare up on social media between user groups – MTB’ers, joggers, and equestrian. There is low tolerance for hoof marks on MTB trails, but this is well managed by the cool heads on committees of the various user groups and event organisers. I have never heard of ‘localism’ being an issue in fact I’d suggest quite the reverse applies. Manaakitanga [hospitality] is a powerful concept in Rotorua and in the forest community in particular. All visitors who respect the environment are warmly welcomed. 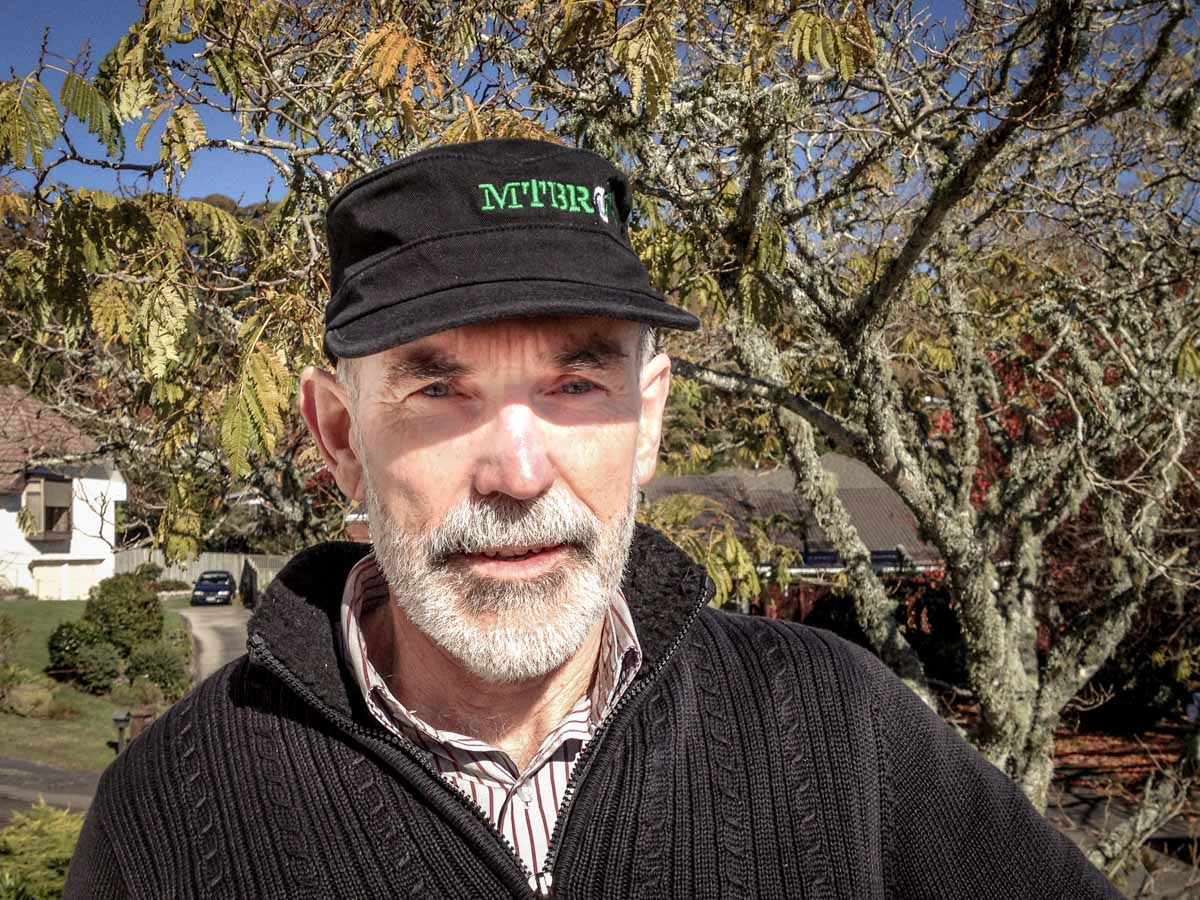 What do you see as Rotorua’s biggest opportunities for future growth as a mountain bike destination?

Two things. A scenic ride that would rival the Heaphy which is ‘on the radar’ of the Trails Trust. The other is a chairlift to facilitate rapid access to gravity and enduro trails in Whakarewarewa Forest.

Is it true that there’s a taniwha in the forest that eats lost Australians?

If you go by the trail names it’s a very spiritual place. The ghosts of a Taniwha [Lizard Monster]- Kataore , a Tohunga [Medicine Man] – Tuhoto Ariki, Kurungaituku [a legendary bird woman whocaptured the warrior Hatupatu] are all in there, but I’ve never heard of any lost Aussie falling prey. Quite honestly, at some times of the day and in the right weather conditions, it can be a spooky place if you’re alone. Also there can be some savage magpies in there this time of year [nesting] but Australians probably have an acquired immunity?

If you could pick one trail in Rotorua to ride before putting away the bike for good, which one would it be?

I will turn 65 two weeks before arriving in Mt Buller so I’ll officially be a Superannuitant and Gold Card holder. Right now that trail would be Tihi o Tawa. If, God willing, I’m still spinning the cranks in another decade, it would likely be Eagle vs Shark. 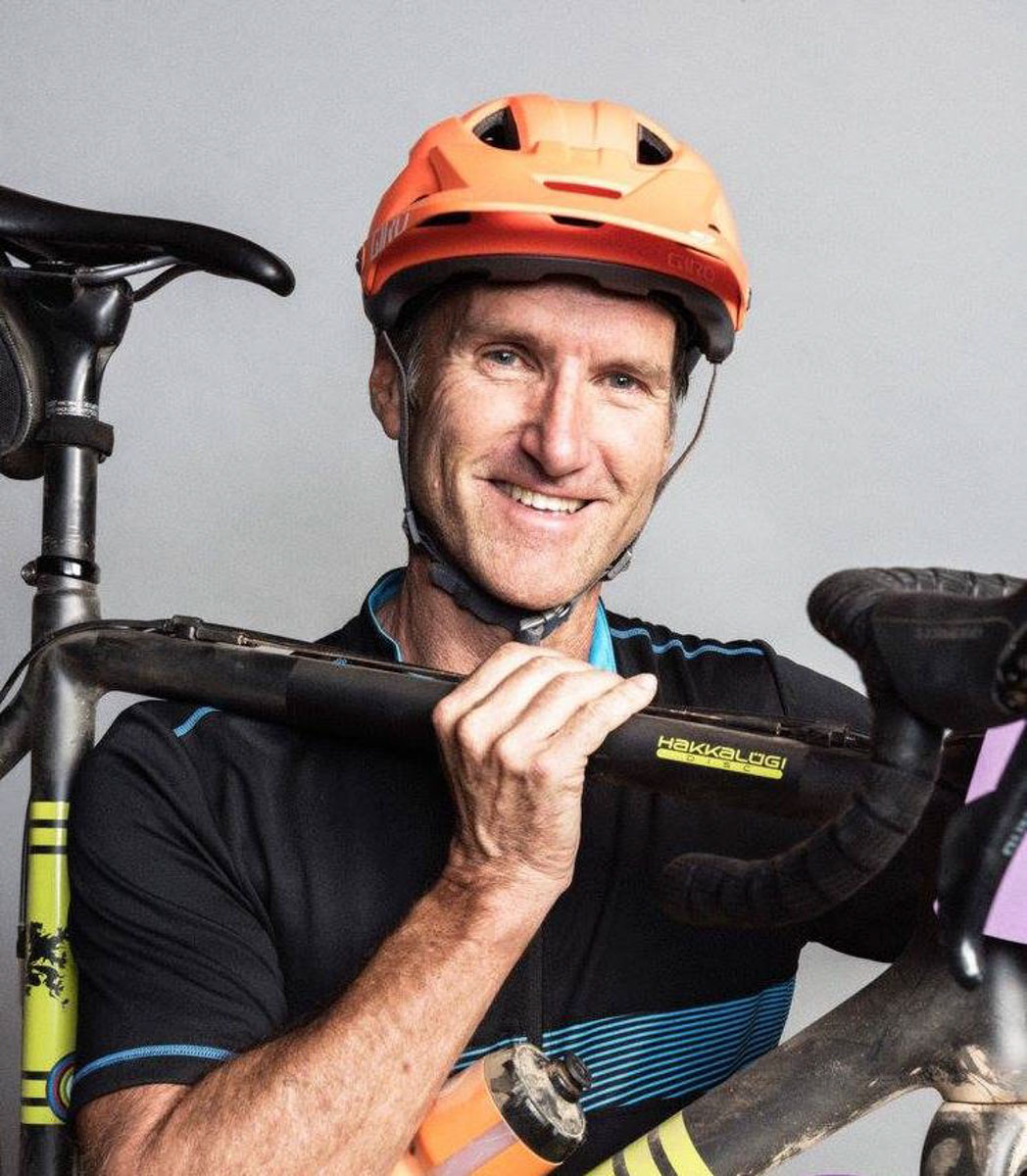 Scot Nicol founded iconic brand Ibis Cycles way back in 1981 and since then he has steered the brand to global prominence. He’s seen it all – the trends, the technology changes, the shifts in the market, the rise of Asian manufacturing, the opportunities of global internet based retailing and much more.

Who has been the bike industry’s great innovator of all time?

The answer is no one and everyone. Incremental change rather than monumental change is how innovation happens in our industry. Charles Goodyear invented vulcanization, which gave us pneumatic tires. Ignatz Schwinn gave us fat tires. Kestrel made some of the frames out of carbon. Paul Turner put front suspension on the bikes. Dave Weagle is on a lifetime pursuit to perfect rear suspension. Stan Koziatek pioneered tubeless on our mountain bikes. Ibis made them wide and in carbon.

What is the greatest area of opportunity for the mountain bike industry today?

Has the evolution of wheels sizes been a push, or a pull development?

Both 29 and then 27.5 started with a tiny bit of push from small industry people. The insufferable 29er evangelicals tried to get the industry to take notice for many years. The pan simmered on a low boil for a number of years and then critical mass hit and 26″ died. In the rush to jump on the 29er bandwagon, a lot of manufacturers made really crappy 29ers. Although 650b had been around for decades, the 27.5″ movement started with some tires by Kirk Pacenti. All of a sudden the switch flipped, 29er sales plummeted and you couldn’t keep 27.5″ bikes in stock. Fortunately, 29ers are way better now, the zombie like attraction to 27.5″ has waned, and we’re going to see both 27.5 and 29″ peacefully coexist, as they should. 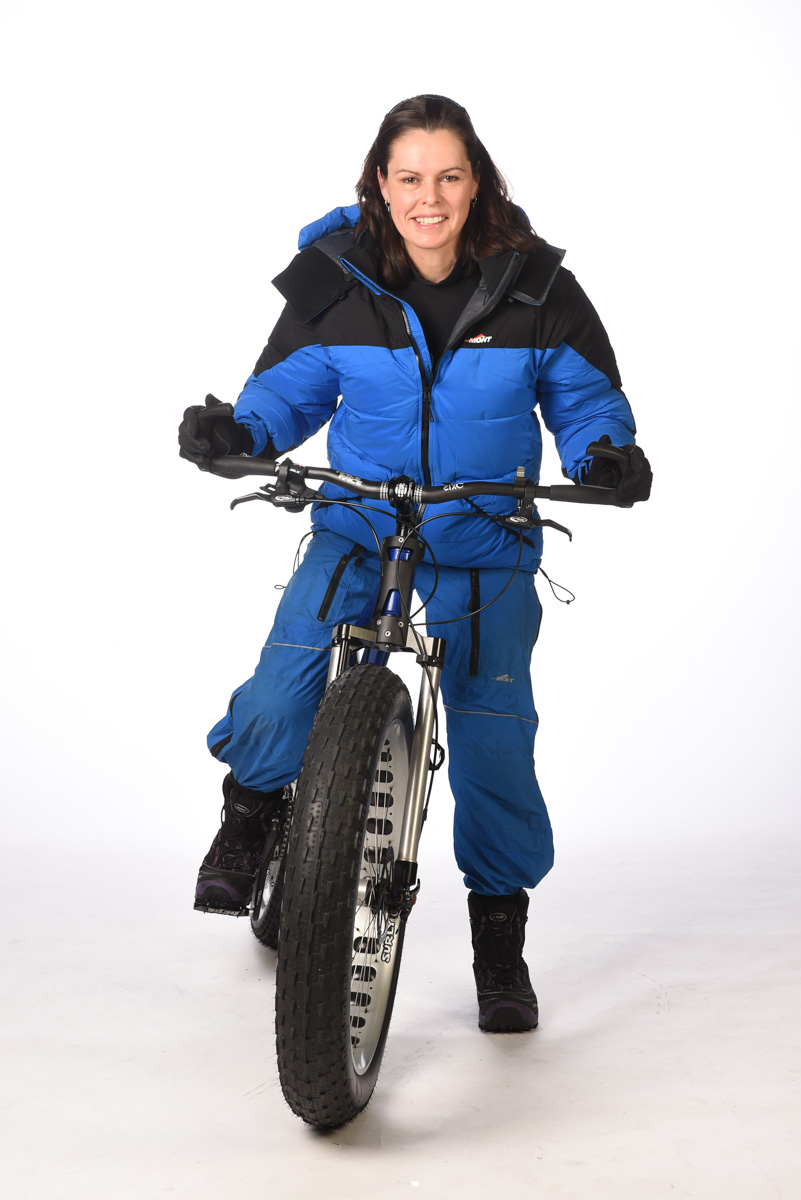 Travelling by bike gives a great sense of place – a unique perspective of how the world fits together.

Kate Leeming is one of the those people we all wish we’d become. A person who has been brave enough to make her life an adventure on two wheels, she has ridden across Africa, Russia, Australia and countless other expeditions raising awareness for a variety of issues. She’s currently training to ride across Antartica. Yes. Antarctica.

You’ve ridden around the world twice, literally, what is it that motivates you to keep pedalling?

My intrinsic love of travelling by bike was developed when I first cycled through Europe (15,000km in total). I found that I made a very close connection with the people and the land, I loved bringing a line on a map to life, and travelling by bike gives a great sense of place – a unique perspective of how the world fits together. Each major expedition (13,400km across Russia, 25,000km through Australia and 22,000km west to east across Africa and next November, across the Antarctic continent) has a clear mission; I always define my physical objectives, I believe in the causes I am supporting and the story I aim to create. These motivations keep me going through the difficult times and on to the finish, and are the reason why I plan to do more.

What is it about a bike that makes it the right vehicle to raise awareness of the causes you champion?

Virtually everyone can relate to riding a bike at some level, so when people follow my journeys and read stories of my adventures, I am inviting them to ‘come along for the ride’ with me. My expeditions have subsequently become a platform to inspire, motivate and create understanding about cultures, geographies, environmental sustainability and in the case of the Breaking the Cycle in Africa Expedition, the causes and effects of extreme poverty. They are opportunities to develop deeper understanding for all involved. I am able to tell it how it really is. And now that I have established a track record with several successful expeditions under my belt, as well as writing, speaking and filmmaking, I am able to garner support because my expeditions are about far more than just a bike ride, a simple adventure or a world first.

How does one train to ride across the Antarctic?

I first tested myself and the Christini all-wheel drive fat-bike in Spitsbergen, Norway. Here the team was able to determine that my plan to cycle across the Antarctic continent was realistic. Experiencing cycling in true polar conditions I devised a program to prepare for Antarctica which involves a series of shorter expeditions training in Greenland and Iceland, at altitude in the Indian Himalaya and in sand (for strength) in the Simpson Desert. Until I can find the funding to do these trips, I keep the pedals turning on the hills and trails around Melbourne and put some intensive hours in the gym doing interval training and core strength so that I am in good condition to launch my specific plan. 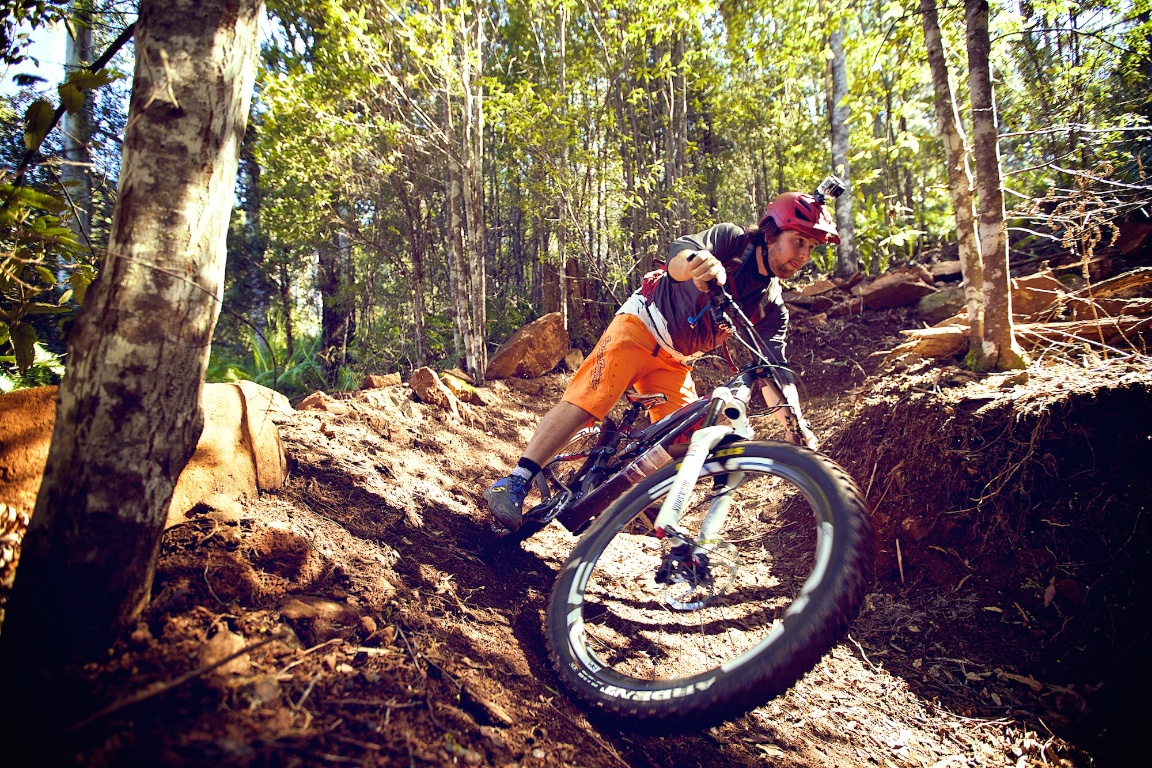 I think sometimes we need to just relax and be thankful that we’re on a trail enjoying the outdoors.

As the founder of Dirt Art, one of Australia’s most-progressive and prolific professional trail building companies, Simon French has literally shaped the way we ride in Australia. His understanding of mountain bike tourism, trail building and the industry’s direction as a whole is a deep as the berms he creates.

What is the next frontier for mountain bike trail building?

I think the next big thing for mountain bike trail building in Australia will be the rise of the commercial bike park and an increasing interest in private/public development partnerships. Developers and investors are beginning to see the potential for mountain bike tourism but they don’t always have the land required, whereas governments have the land but do not often have the funding and/or expertise to develop a successful facility. Our company are breaking new ground in this area with our Maydena project in Tasmania, but we are also working with a number of other commercial clients in Australia as they move through the early stages of their developments.

You can’t make a trail that will suit every rider. Discuss.

While as trail designers and builders we acknowledge that we will never please everyone, I think there is lots that we can do to make trails appeal to a broader range of riders. Building in optional technical sections, and creating a diverse experience in each trail definitely goes a long way to making trails more broadly appealing. At the end of the day though, a good rider can have fun riding pretty much anything, so I think sometimes we need to just relax and be thankful that we’re on a trail enjoying the outdoors.

Which trail/location are you most proud of and why?

We will always be proud of our project at Hollybank in Tasmania. We had an incredibly challenging site and only a relatively small volume of trail budgeted for, yet we were charged with developing something that would attract the visiting rider. The Juggernaut Trail at Hollybank embraced the shuttle-accessed gravity cross country concept and continues to attract massive attention from visiting riders. The trail is often referred to as Australia’s best mountain bike trail, which is something that we are really proud of.