It has been an absolutely surreal couple of days with Dan and I achieving the biggest results of our racing careers over the weekend winning our World Cup races at the opening round of the UCI Mountain Bike World Cup in Albstadt, Germany. 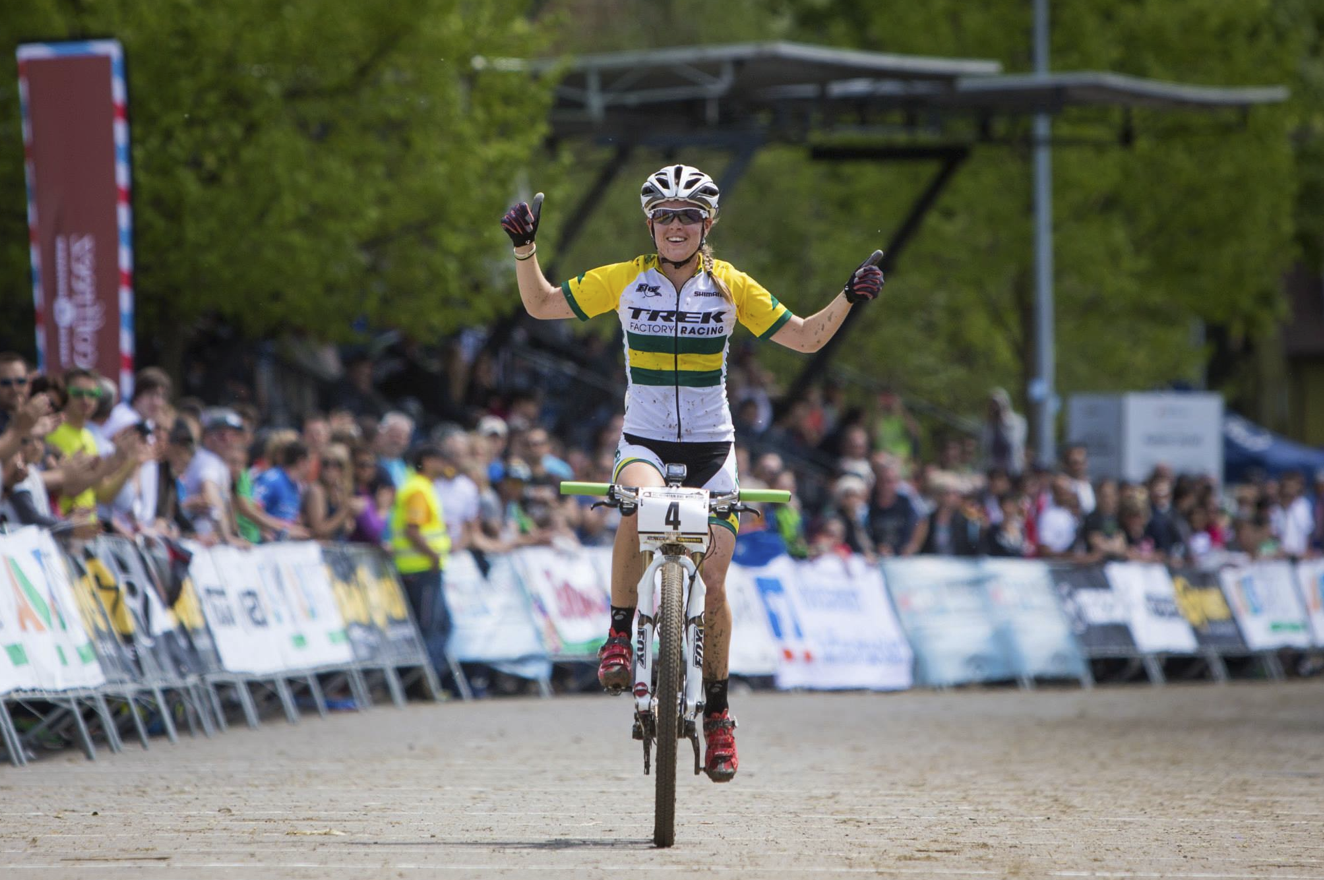 The week leading into the race went perfectly smoothly being looked after by all the kind people from the Trek Factory team, for me there were two major things ticking over in my mind. The first, what was going to happen with the weather, it has been completely inconsistent with rainy days followed by beautiful sunny days and the forecast was continually changing. The second, how is my form? My training had been going well, I had a dream start to the season in February/March (winning my first National Round, Mellow Johnny’s Classic and a few other races). But, I had a really average race in Solothurn in Switzerland a couple of weekends ago so there was certainly some doubt in my mind…. I was really keen to get the first World Cup race done and dusted, just to see where I stand relative to the other girls and see where I need to improve. 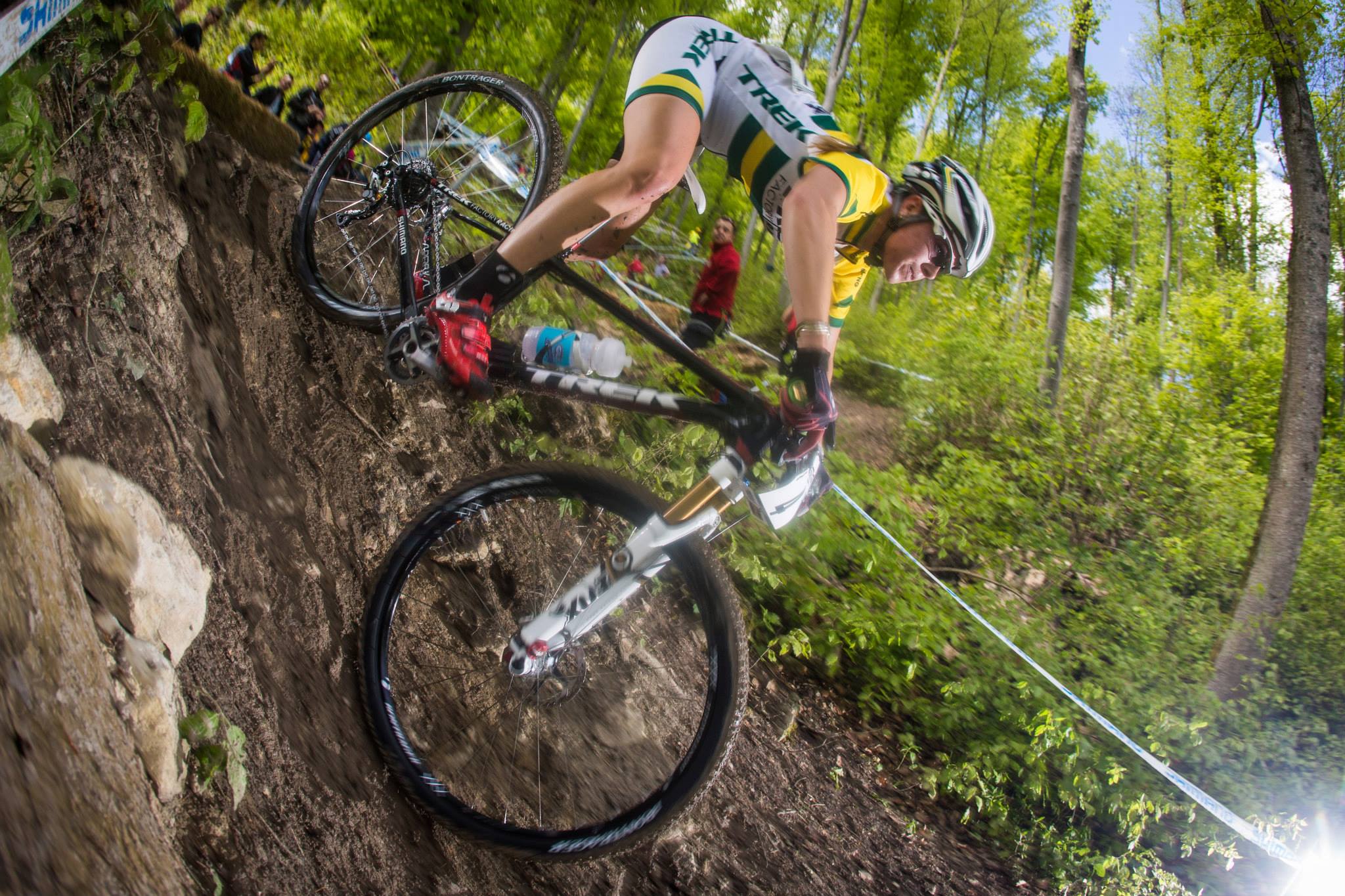 I warmed up playing over my race tactic in my head, all I could think was RIDE SMART, Dan and I had talked about in the leading days and we knew it would be crucial in the later half of the race. I knew it was 100% important to keep my head cool and clear and not get caught up in any silly moves.

I had a clean and fast start and was in the leading group of about five riders but I could see one of the Colnago girls already putting the pressure on and opening up an advantage. I was getting caught up with a few anxious and stressing riders who were burning energy being silly. At this point I wasn’t backing myself and was starting to think about where I stood. Can I get top 5 today?

I settled into my pace straight away and on the second climb I was already starting to pull back and pass riders and rode into about third of fourth at the halfway point. It was then that the leader had a flat tyre and at that same point I passed another rider. Now into second (although I thought I was now into about fourth) and at the end of the first lap I rolled onto the wheel of the Swiss leader through the star/finish area.

There was a bit of a head wind and I played it cool and patient and refused to pull a turn until we got back into the slower climbing and was able to ride away. By now, I knew I was leading and knew NOW I need to keep in under wraps and focus on doing everything right, relaxing and recovering where possible and riding consistently.

It was on the first climb on lap two that I got the gap and was able to extend it to almost a minute at the halfway point. I didn’t see another rider for the rest of the race and tried not to think about the end result until I had crossed the line. 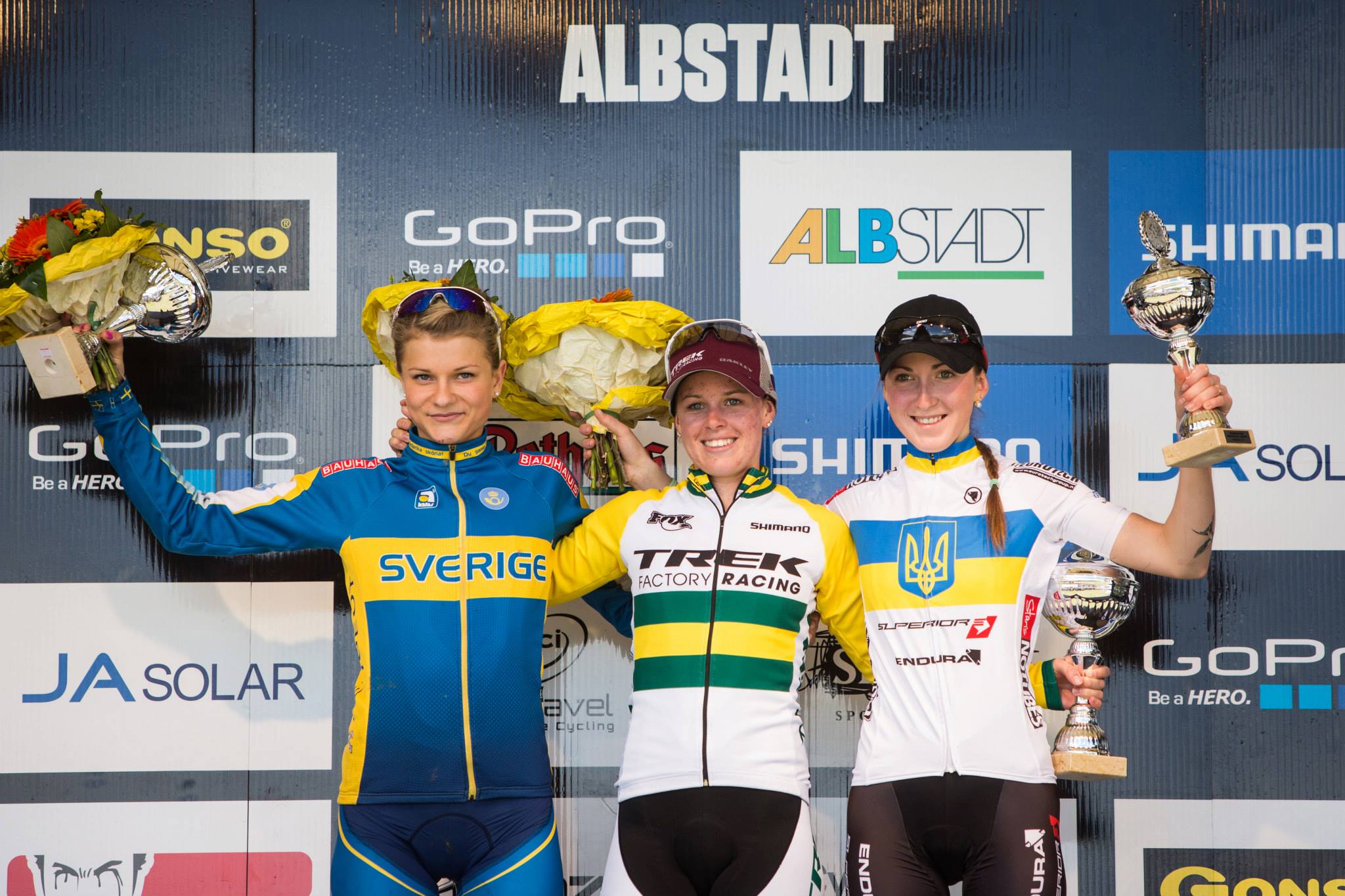 It was an unbelievable race for me, if I ever expected/hoped/trained to win a World Cup, I didn’t plan to do it by 48 seconds and a solo ride. It gives me great confidence leading into the season (which has actually for me been going since January) and into round 2 of the World Cup this weekend on my favorite course in the Czech Republic.

It was a little bit emotional at the finish line, I’m not sure if it was sheer relief as this had been my years goal, or if it was surprise, shock and just happiness but a few tears decided to leave my eyeballs…. (I was not the only one…)

And now I go into the second round wearing the leaders jersey which I will hold on to as long as I possibly can! Time to not change anything as all the training seems to be working!

Dan’s race was almost a complete blur to me, I was watching on my own for the first few laps, he had a great start and then dropped back to about 18th position where I was happy, as I knew he had backed off the pace a little to conserve as it was going to be a long and tough race on a crazy brutal course, not to mention the conditions!

As the race went by he just pegged off rider by rider and I was so happy he was going to be in the top 10. I spent the majority of the race watching with Team Manager Rourkie and Emily & Adam who were as excited as I was. Adam started making up crazy scenarios like (Canadian Accent) “ohh, imagine if he got on the PODIUM” and “Imagine if he WON the race, that would be CRAZY, could you just imagine”. We laughed at the thought of it, and before our eyes Dan continued to move up and pass the riders ahead of him. 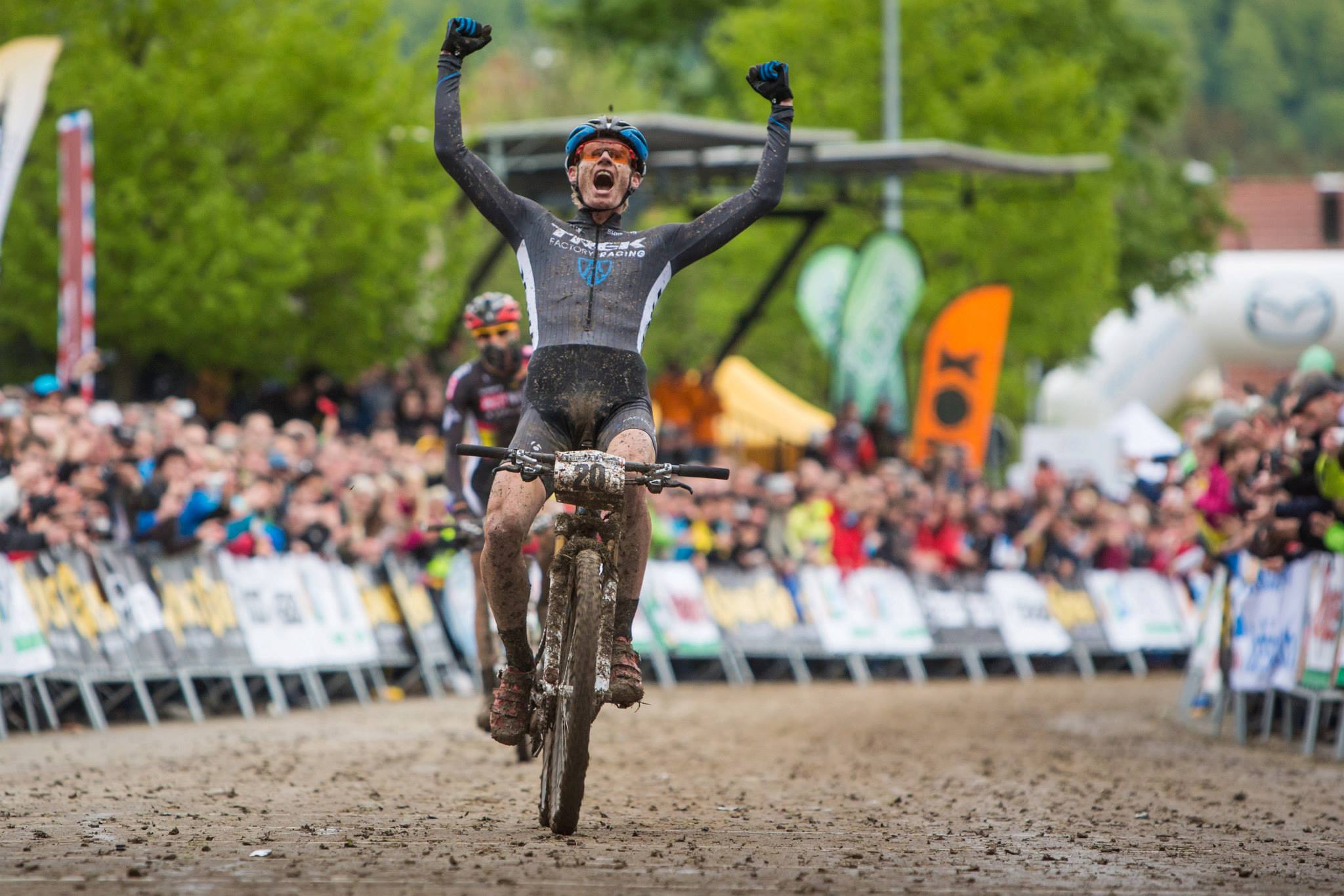 With half a lap I saw him make the pass on the Olympic Champion Kulhavy and I ran down to the finish line, but now I had no idea what was going on. I heard a false rumor he was in the lead and then found a high place to see him cross the line. I couldn’t believe the first rider to enter the finish straight was DAN!

The look on his face (and I ‘m sure mine) was that of absolute disbelief! There was almost no excitement, just shock, it really is indescribable. There are few who truly understand what Dan has been doing over the last 12 years (and the lack of assistance and support he has had until this year) as he chases the World Cup series across the globe, but on this day, everything fell into place for him and he could show what he is really capable of! 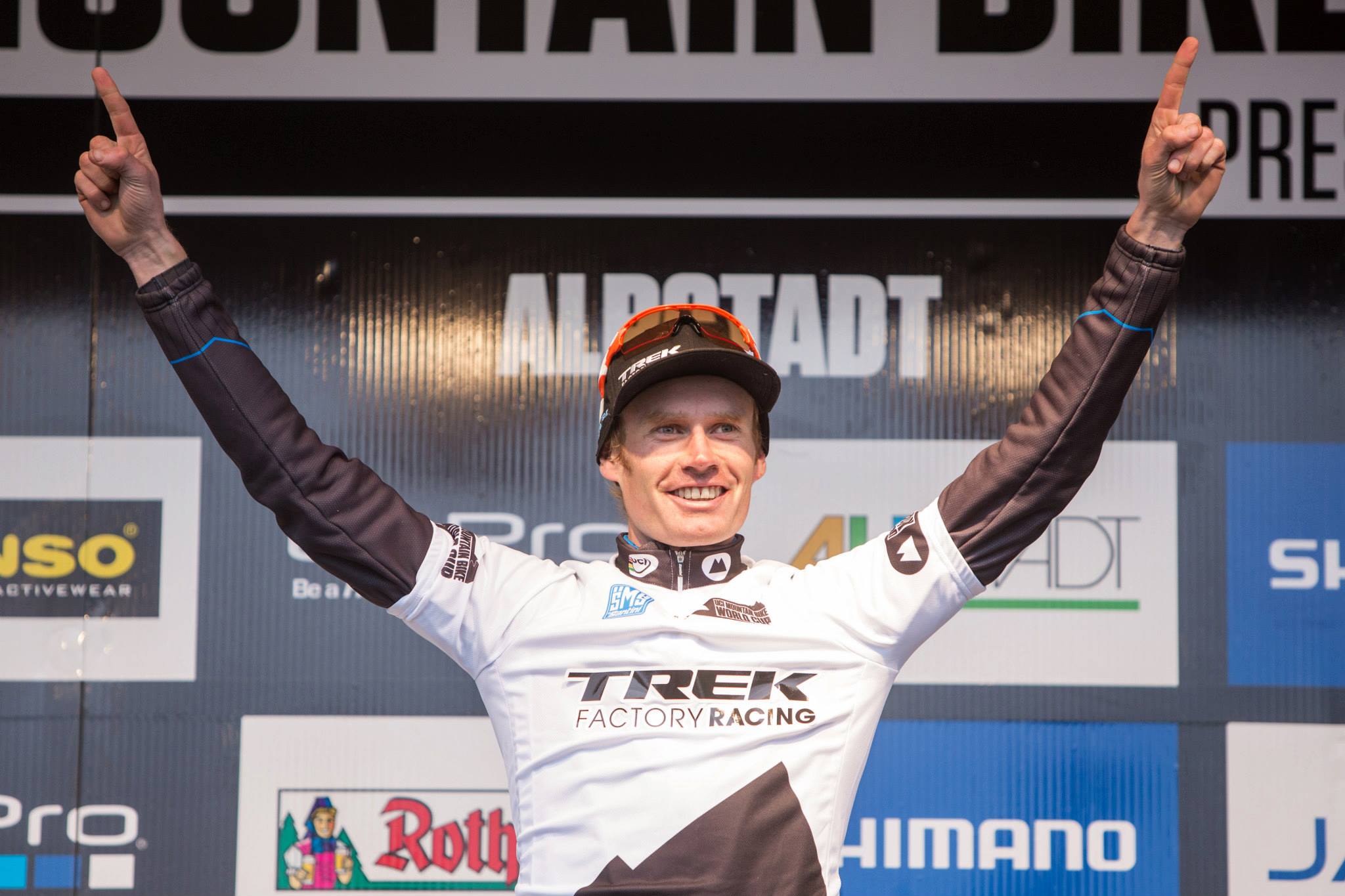 There is not much more I can write to explain what happened, but this is a huge step forward for mountain biking in Australia and I know once things start heading in the right direction, there could be a few more riders following in the footsteps of Dan.

Again, it has been a ridiculously crazy weekend with both of us achieving the unexpected. To win for either of us is awesome, but on the same weekend at the FIRST World Cup, with the leaders jersey. Well. You get the point!

There are some crucial people that must be thanked… Our Families are the ones who have supported us forever, in every way, Trek Factory Racing, our new team have taken us under their wing, and taken crazy good care of us with love, support and the best equipment and are so genuinely happy for us, it’s awesome! Rich Peil, who has put a lot of time, effort and money in supporting us throughout the last couple of years, helping us get to the Olympics, and now to our first World Cup victories. Rich has not just supported Dan and I, but the developing, and elite mountain bikers of Australia, he is one of the last people left supporting the Australian scene. Thankyou!

All of our sponsors who have supported us along the way, I hope this is just the beginning, I am so excited and hope there are many more success stories to share! We are on a level playing field now.”