I'm on the chairlift for the second time that morning during day 2 of Bike Buller when my phone chimes in from the top pocket of my CamelBak. It's Will, who's here in Buller for the first time - his text reads simply: 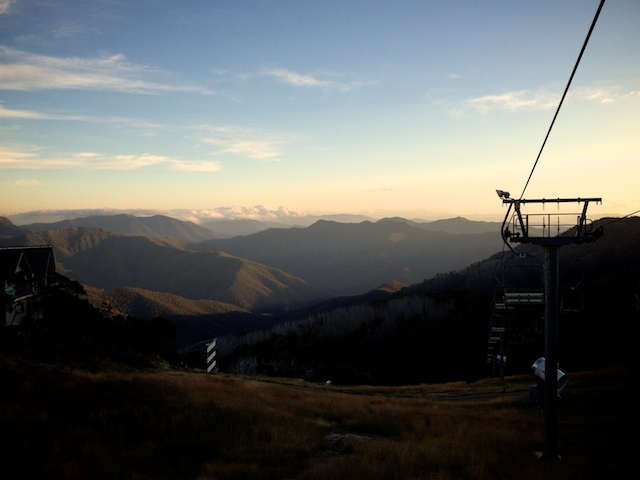 Decoding Will’s particular blend of babbled enthusiasm, I know that the Delatite River Trail has lived up expectations and has left him, as we promised, as frothy and shaken up as any good vanilla ‘shake should be. Thinking back to my first ever run down the Delatite, I can recall how he must be feeling – the manic speed of it all, the stomach clenching fear as you get off the ride line and big rocks start flicking your wheels about, the disbelief at just how long it keeps it on descending. And finally a mixture of relief at having survived unscathed, and desire to just do it all again RIGHT NOW. 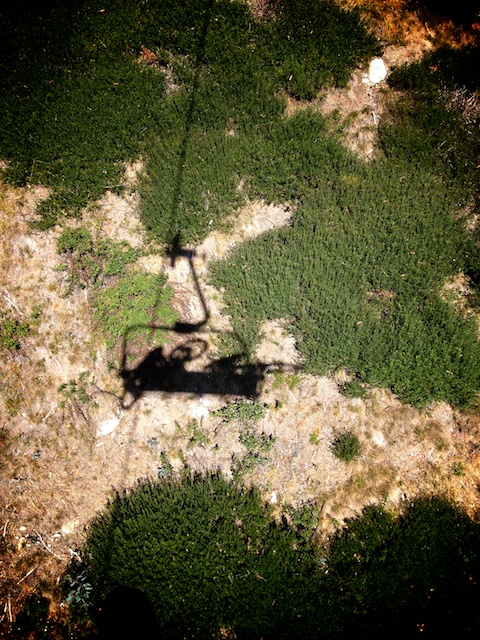 Grinning at Will’s excitement, and with the alpine sun scorching in a perfect sky, dust in my nostrils and one of my favourite trails in the whole world ahead of me, I remember once again why I love coming to Bike Buller. This event is one of the best, an event for true mountain bikers, one that rewards a blend of skills, fitness and insanity, not just the strongest legs.

Road tripping down the Hume isn’t what it once was: no more Tarcutta, no more Holbrook, bypass after bypass after McDonalds after rest stop. But at least it means the trip is a speedy affair, from Sydney to the Buller village in just over eight hours, and then 15 minutes more on foot to reach the summit.

A sunset from the Mt Buller summit is a gem that too many visitors miss out on, but not us. Mick, ever prepared, ensured we were armed with a camping stove, a packet of haloumi for grilling and a local ale. And so it was up to the peak we went to get the weekend underway in just about the most relaxing way imaginable and to fuel ourselves ahead of the next morning’s challenge.

Stage 1 of Bike Buller is remarkably good value. By that I mean, in just 50km of racing, you get in at least 100km worth of everything. This race packs in more – more fun, more hurt, more views, singletrack, rocks, climbing, descending, drifting, more grit – into four hours than any 100km marathon I’ve ever ridden.

The undoubted highlight of this stage for our trio (aside from the Stonefly and Stirling descents), was when Will proudly declared “this is where we make up time”, and then immediately proceeded to crash violently into an embankment on a perfectly flat fireroad, smashing his front wheel hard enough to lodge about 500g of earth inside his tyre. Inspirational stuff!

And as we grovelled our way back up the last few kays towards the village, my mood swung wildly between elation and horror. Elation; as I recalled flinging into the perfect corners of Stonefly and I remembered the endless views from the top of Mt Stirling. Horror; as my legs felt like they’d been run over by a bus. Mick had stopped talking, like his mouth didn’t work. Even Will, a man who I’ve never since grimace let alone go into muscular spasm, was contending with cramping calves. It was epic.

But of course life at Buller can only get better, at that evening’s Flow Pump Track Pursuit. With the sun setting, 32 riders went at it head to head, like gladiators of pump, in a knock out competition on Buller’s new modular pump track. It was a great vibe, made all the better by the early round departure of some of the event favourites who suffered brain explosions in the heat of the moment and threw away their shot at glory. Watch the video below to see what it’s all about. 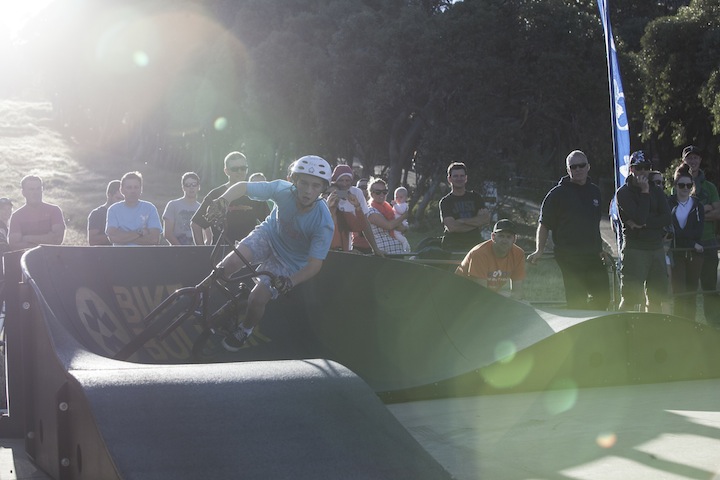 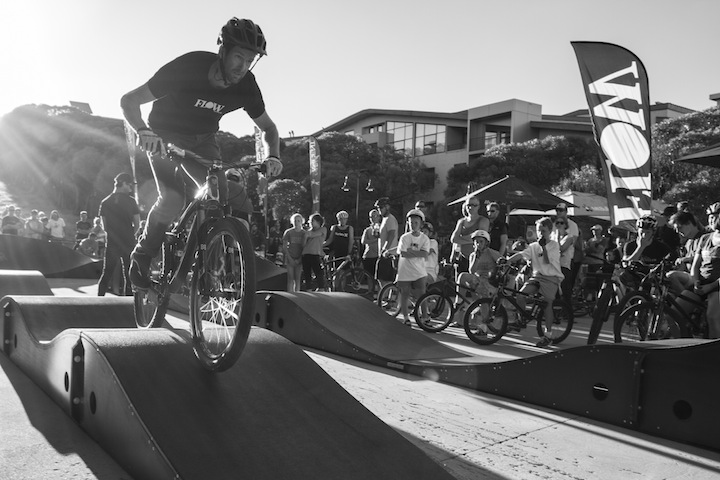 Our trio had stuck together from go to whoa, riding not racing, and as we dined on Will’s special salmon pasta that night, it was good to collectively share the memories. And the gas, which Will’s cooking ensured stayed with us till well after we’d returned to Sydney.

If you know your geography (or perhaps geology), you’ll appreciate that mountains tend to be rather tall. Take Mt Buller for instance. It’s sufficiently tall that even some of the fastest riders in Australia will take almost 40 minutes to ride from top to bottom.

40 minutes?! Think about sitting on a bus for that long. It’s easily long enough to get bored. It’s two episodes of Home and Away if you skip the ad breaks. It’s a big bloody hill.

The second day of Bike Buller is all about the descending, and it’s truly legendary stuff. Though you’d be foolish to do so, you could quite easily drive all the way to Buller for one top-to-bottom descent and go home feeling quite content. But the Bike Buller folk won’t allow that; instead, they encourage you to open wide and jam in as much vertical as you can – they want you to gorge on it, like an 13 year old at a Sizzler buffet. They want your hands to hurt, your brakes to smell and your eyes to be glazed dinner plates with black gunk in the corners.

A brake burner gets the day underway; starting in groups of four, riders are given three hours to complete as many laps of primarily descending course as they can manage, with a chairlift taking care of the climbing in between. Sounds easy? By lap two, the pain in my legs and forearms would argue otherwise. The course might drop a lot of vertical, but it’s punctuated by punchy pinches, just short enough in duration to lure you into attacking them in too-hard a gear, and staying out of the saddle for so much descending makes for quads of fire.

Every rider must complete a minimum of three full laps, but these are really just a warm-up for what’s coming next, Will’s ‘milkshake’, the top-to-bottom run down the Delatite River Trail.

Last time I visited Buller, I had the pleasure of seeing a man fly on the Delatite. Off his bike, off the side of the track he went at cruising altitude, over at least 30 feet of flora and fauna, before disappearing into head high scrub where he lay moaning while his girlfriend rode right by, completely oblivious to her man’s near-death experience. I remember wondering at the time how he managed to so forcefully eject himself, but now I know.

If you get a little too cocky on the Delatite River Trail, things can unravel very, very quickly. Lay off the brakes for just a couple of seconds longer than common sense would dictate and there’s a pretty good chance that you’re going to scare yourself. This is a trail where you can run out of talent, fast. The natural ride line of the trail is pretty straightforward, but if you need to make a passing move, or if you run a little wide on a corner or two, you’ll find your wheels pounding through some of the most intense chunder of rocks, bark and sticks.

But at the same time, it’s also one of the most completely mind-melting experiences you can have on a mountain bike. After screaming, literally and figuratively, through the tall gums,  the trail begins criss-crossing the tumbling waters of the Delatite on log bridges. 13 times you zig-zag over the river, before finally emerging with a grin full of brown dust. It’s bloody beautiful.

Bike Buller coincides neatly with the local food and wine festival too, held in Mirimbah Park where the trail finished, and as Will, Mick and I wolfed down burritos, ales, cakes and cheeses, it was hard to believe life could get much better.

Morning number three of Bike Buller in Chateau Flow was a little like a seniors’ aqua-robics class, everybody moving in slow motion and moaning a lot. But a dollop on chamois cream is an enlivening thing, and there was riding to be done!

With a very rushed breakfast sitting just around the vocal chords, the final 24km stage got underway with defibrillating climb, before funnelling riders in a dusty, brake-howling chain into a full run of Copperhead. Are we awake yet? Yes indeed.

The promise of Misty Twist got us up and over the snaky switchbacks of Cornhill. That and Mick’s determination not to be passed by a man on creaking Cannondale older than he was. Misty Twist, followed by the Cornhill, is Bike Buller’s sting in the tail – but a entirely pleasurable sting, like the relief after you’ve held in a wee for a very long time.

Our group of three crossed the line together, with event organiser Sam Maffett chiming in over the PA: “These guys have more fun on the trails than anyone.” Sam, how could you not? To us, that’s what Bike Buller is all about – stuff finishing times, nutrition, cramps and hardtails – and having fun is the reason we’ll be back again.