While most of the momentum in the mountain bike world is now rolling towards 27.5" wheels, in the marathon racing segment, 29ers are still the best option to chew up the miles, chase down the attacks and fight off fatigue. At this year's Port to Port MTB, we grabbed a few of the bikes from the pointy end of the field to take a look at how their riders had them set up, and why.

Coming into Port to Port MTB as the defending champion, and a veteran of countless marathons, Andy Blair’s setup is a well-dialled XCM muncher. 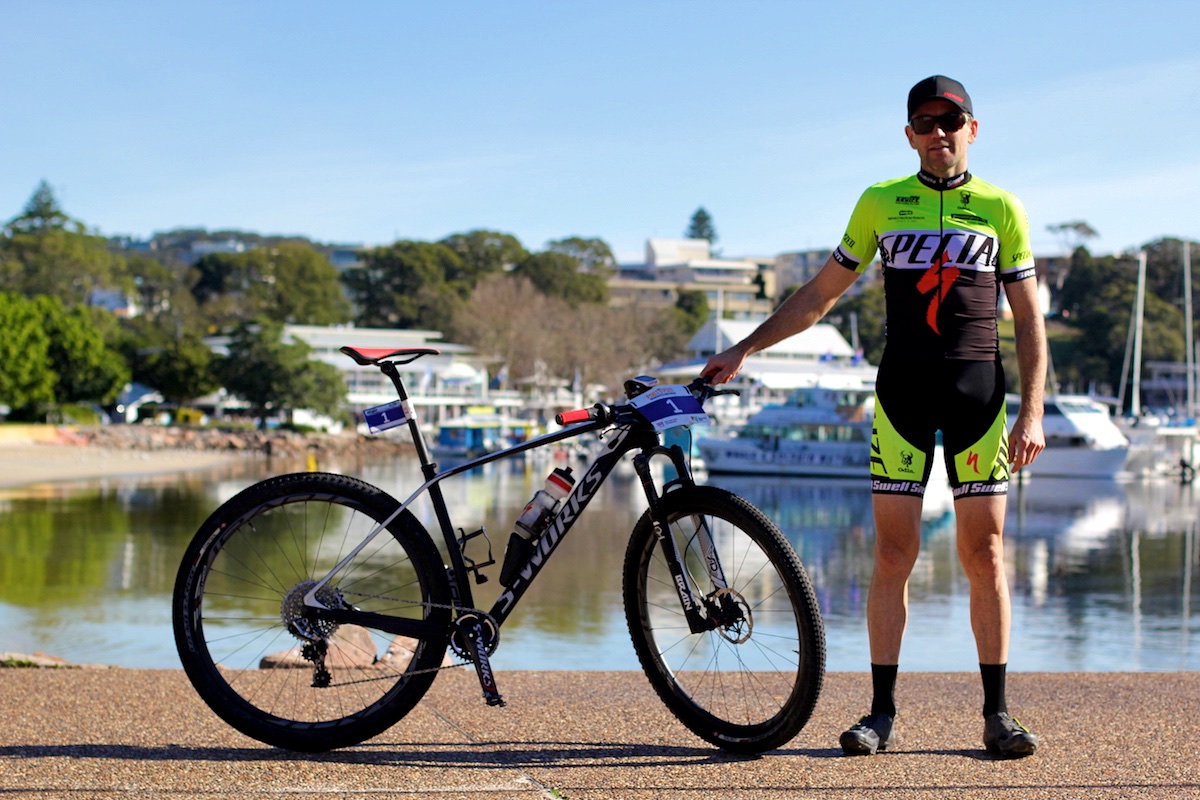 Position: Given how long this man has been racing cross country, it’s no surprise that Blair’s setup is of the traditional XC mould, with an aggressively dumped front end putting putting loads of weight over the front for steep climbs, hooking singletrack and aero performance. “I’m a bit old school I guess, I like a big drop,” says Blair. “I actually prefer it on the descents too, it’s not a big compromise for me.” A veritable praying mantis of a man, Blair’s bike looks even more aggressive thanks to the epic amounts of seatpost (the exact same height as his road bike), which also adds a bit of compliance.

His bars are 660mm wide. “Wider feels nice, but at a big race, especially like a World Cup, narrow bars really help you navigate through a big field.” He also feels that a narrow bar requires less focus in tight trees, which can make a difference in terms of fatigue over a marathon.

Drivetrain: Blair’s SRAM XX1 drivetrain is operated by a Gripshift shifter, which puts him at odds with the majority of the field. Gripshift has dropped in popularity lately, especially with the advent of single-ring drivetrains, but Blair’s a fan. It’s not just the performance he likes, but also the fact a Gripshift shifter won’t pulverise your knee if you happen to slam it with your knee! “Even if you only slip a gear and smash your knee once a year, I think it’s worth running Gripshift just so you can avoid it,” says Blair. It’s got to be said, it looks super clean too, especially with the Rockshox SID/Brain fork which doesn’t need a handlebar mounted lockout.

Fork: Blair’s SID has been modified to give him 100mm of travel, rather than the stock 90mm, with a new air spring. He also makes sure his preferred air pressure is marked on the side of the fork too, so if he has to get the fork serviced between race stages, it’s simple to get it setup correctly again. Blair always runs his fork’s ‘Brain’ damper fully on, and rarely adjusts the sensitivity. “That’s the good thing about it, you never need to switch it on or off,” say Blair, “because even though it’s firm when you’re out of the saddle, it blows through as soon as it hits a bump.”

SWAT’s in the box: “I’m totally sold on it,” says Blair of the SWAT box. “I never need to think about moving my spares from jersey to jersey, they’re always with the bike.” In his SWAT box, Blair keeps a tube, a hanger, tyre lever, C02 and plugs for his Sahmurai Sword tyre plugs.

Sahmurai Sword plugs: A little something that Blair picked up while racing the Cape Epic, the Sahmurai Sword (named after their inventor, Stefan Sahm) tubeless tyre plugs will repair a hole in a tubeless tyre that might otherwise require require a tube to be installed. First you ream out the hole, then you insert the plug, hopefully before too much pressure has escaped.

We’ve always liked Dylan Cooper’s style on a bike. He may be ‘trad’ XC kind of guy, but he attacks the descents like a mad man.

Normally a hardtail rider by choice, he’s recently switched to Trek’s 100mm-travel Superfly 100 for much of his racing. “She’s a fair weapon of a bike,” he says of his XTR Di2 equipped machine. “I’m a full hardtail, It’s the first dual suspension bike I’ve had that feels as efficient as a hardtail,” he explains of his decision to ride a dually, “it’s really active and smooth, but I don’t feel like I’m giving away any power. It’s the best of both worlds.”

Position: Like Blair, Cooper is happy to admit that he’s old school. Narrow bars and a slammed, long stem are the order of the day. “It’s the length of the stem more than the drop that probably makes it look unusual,” says Cooper, of his 120mm stem. Whereas with Blair, the drop from saddle to bar is pronounced, because of the Trek’s longer head tube and Cooper’s shorter build, the position isn’t quite as extreme as found on Blairy’s bike. Nonetheless, it’s a pretty front heavy riding position.

Drivetrain: Cooper is running Shimano new XTR Di2 drivetrain in a 2×11 configuration, and he’s taken advantage of the system’s Synchro Shift mode to run one shifter for both front and rear shifting. “I swapped the shift paddles around from the standard configuration,” Cooper says, “and I also customised the shift patterns too.” Cooper has configured his shifting patterns so the front derailleur shifts the chain to the small ring earlier, to maintain a better chain line and avoid the ‘big/big’ combo. Cooper runs the shift speed on its maximum speed.

Suspension: We probably wouldn’t advise it (we’re big believers in having the recommended amount of suspension sag) but Cooper runs his suspension super firm. “It’s pretty hard, I have about 220psi in the rear shock and 110psi front,” says Cooper, “but it feels good to me. Most of the time I run it in the middle Trail setting. Even though it’s a duallie, I still like to ride the forks more, even on a steep descent, which is why the firm pressure in the forks works.”

Tupac, as he’s known, is a real diesel engine of a rider. Unstoppable, reliable and built to go the distance. He’s not a flashy rider, and his bike is similarly purposeful.

Setup: Compared to the super aggressive position of Cooper or Blair, there’s comparatively little drop between saddle and bar on Tupac’s bike. “I’m a sausage dog,” he laughs, “my legs are really pretty short for my torso.” Not being low over the front doesn’t seem to inhibit his climbing of course; being comfortable will ultimately be advantageous for most riders, especially in a marathon or multi-day scenario. For a more in-depth discussion of comfort vs performance, take a look at our interview here.

Drivetrain: Tupac’s another SRAM XX1 user. He runs a 34 tooth chain ring, and having spent some time following the lead bunch in a media car during the Port to Port race, we saw that other riders running a 32-tooth chain ring were often on the point of spinning out.

Suspension: Tupac runs RockShox’s RS-1 inverted, carbon bodied fork. He’s tweaked the setup too, to get a more supple ride. “I found that at first with the recommended pressures I didn’t feel how I wanted it,” says Tupac, “so I’ve installed four Bottomless Tokens and dropped the pressure.” This gives the fork a more supple beginning stroke, but with much more ramp-up deep in the stroke to avoid bottom out.

Extras: Power meters are becoming a bigger and bigger part of mountain biking racing, they’re no longer just a tool for the road. Tupac uses a Pioneer system which we’ve never seen before, but apparently is gaining a bit of traction on the road. The homemade looking contraption hanging beneath the saddle is literally that, homemade. “I’m too much of a tight arse to buy a saddle bag!” laughs Tupac. “So I made this one out of old headset spacers and Velcro from Bunnings.”