Along with the snakes and spiders, the tablelands behind Cairns are also home to another band of creatures: The Mareeba Mountain Goats. But as we found out, these goats are a friendly bunch, and won't bite you (unless you skid on their singletrack perhaps!).

After sampling the goods at Smithfield and Port Douglas, we turned our attention inland to continue our exploration of the riding on offer in the Cairns region. The first stop on the itinerary was Mareeba, home to a passionate club of riders who harbour a network of singletrack that’s even sweeter than the pineapples the town’s famous for. 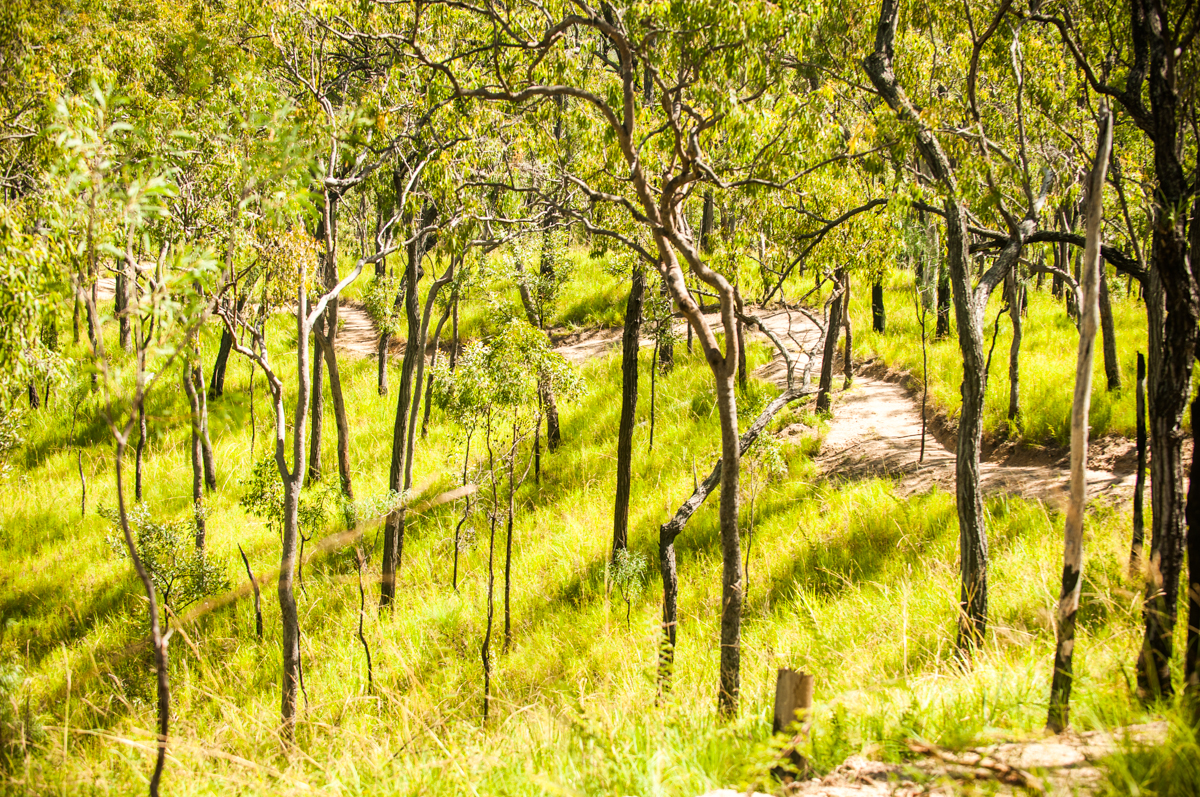 Davies Creek lies about ten minutes outside of Mareeba, and it’s where the Mountain Goats play. We were joined on the trails by Rudi, the club secretary, who was fizzing at the bung to tell us more about the trails and show us their latest creations.

The feeling of riding a machine-built trail that’s yet to get chopped up or skidded out it is not an opportunity to pass up.

The arrangement at Davies Creek is a model we’d love to see more of across Australia. The land on which the trails are built is actually subject to a pastoral lease, with beef cattle roaming amongst the trails and termite mounds; the riders and farmers look out for each other, and both parties have a vested interest in keeping the place free from the scourge of rubbish dumping and motorbikes ripping up the trails.

Our timing could not have been better, Rudi told us. The club had recently secured a matched grant for the development of new trail, which was only days away from completion. And would we like to give it a test ride? Hell yes! The feeling of riding a machine-built trail that’s yet to get chopped up or skidded out it is not an opportunity to pass up. 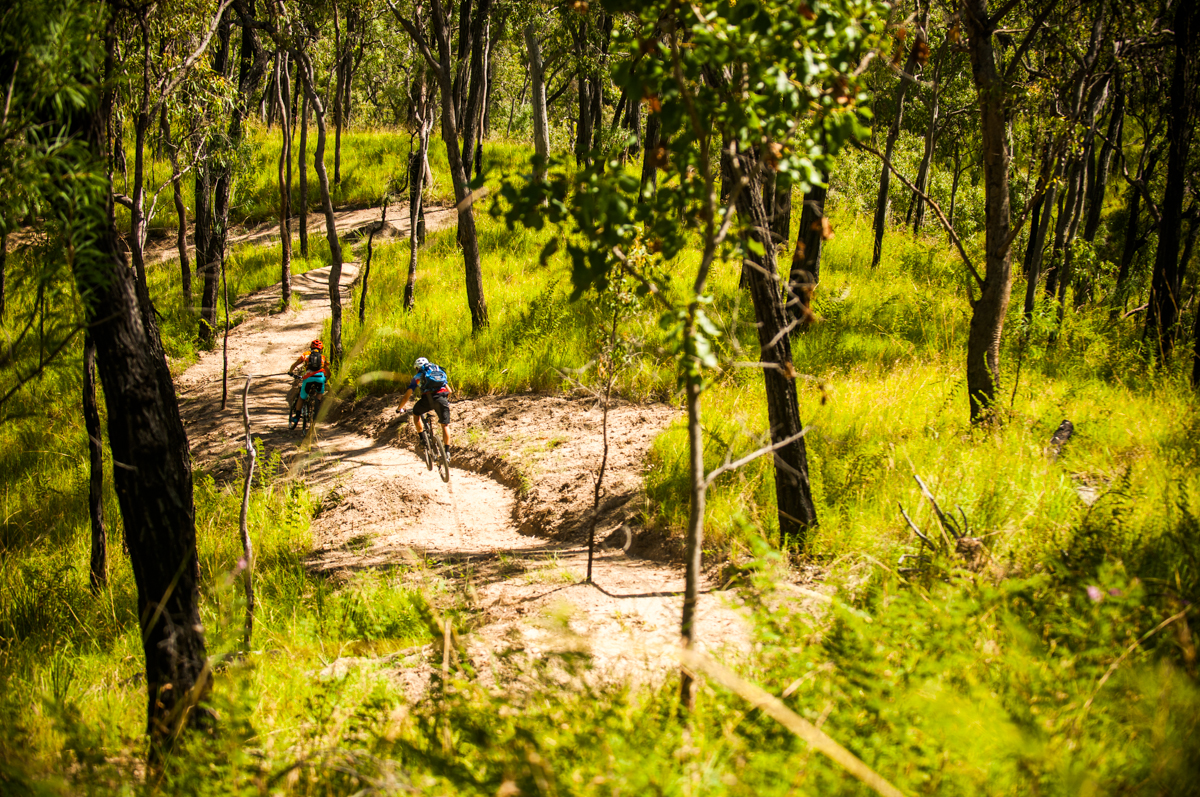 The new Tank Trail is a gem. Just shy of 10km long, it takes in a huge variety of soil types and milks the most out of the terrain, but without feeling forced or awkward – it’s a great piece of trail building. After looping through gully after gully, the trail finishes up with a ridge-run that should top well over 50km/h once the ride line is established.

Davies Creek was a real surprise for us. The names of Cairns and Atherton are well-known in mountain bike circles, but little Mareeba, sandwiched in the middle, should not be overlooked. If you’re venturing up over the range from Cairns en route to Atherton, you’d be a fool not pull in to Davies Creek for a couple of hours and an ever greater fool if you didn’t get a milkshake from the joint down the road afterwards!

With a stomach full of dairy and still buzzing from the flow of Davies Creek, we rolled into Atherton once again. It was only a few months ago that we were in town for four days of amazing riding in this blossoming mountain bike hot spot, and it felt like we’d never left. Atherton is a fantastic town, and this place must go on your bucket list!

There’s a staggering amount of trail weaving across the slopes of Mt Baldy already, and the network is growing steadily. So to this the bike-ification of town, with plans to build a trail right from the centre of town into the singletrack, and business (like the Atherton Tourist Park, where we stayed) beginning to cater to mountain bikers with facilities like bike washes and work stands. We’ve got a feeling that within a few years, mountain biking will be the beating heart of Atherton.

Part of the reason for our return to Atherton was to ride a final piece in the puzzle that hadn’t been completed last visit, but which was now open for business. Ricochet (or Trail 9) is one of the gems of the Atherton Mountain Bike park, but until recently it was only accessible by a long, steep fire road climb – it wasn’t really part of the network. But that’s all changed now, with a new 14km section of Trail 9 completed, winding its way up to the pinnacle of the park, and this is what we’d come to ride.

It’s not often that a trail is so good that you’re forced, totally involuntarily, to scream with happiness. We lost count of the number of times that the opening section of Trail 9 reduced us to howling like girls at a Beiber concert. The first section of Trail 9 is genuinely one of the nicest pieces of trail we’ve rolled tyres over. It descends into a gully that’s so steep you’d battle to walk down it, so the trail is layered down the slope with a series of massive switchback berms that suck you in and spit you out so fast you don’t quite know what’s happening. And these berms go on, and on, and on, and on… By the time you reach the valley floor, you’re not even sure which way you’re facing.

With a descent like that under your belt, the climb back up is forgotten in the afterglow. Once again, the trail is superbly built, biting off the nine kilometre climb in easily digestible chunks, with incredible views and rest spots along the way. Before you know it the whole valley is laid out beneath you. There’s only one way back to town, and that’s straight down the bobsled track of Ricochet.

We’re not exaggerating when we say that the complete Trail 9 loop is one of the finest trails we’ve ridden in Australia. Nine kays of climbing may sound a lot, but it’s a fantastic ascent, and the opening and closing descents are ridiculously good. With the completion of this trail, Atherton reaches a whole new level, with some truly epic singletrack loops. And with plenty more trail in the pipeline, who knows how much better things can get here? We’ll definitely be back to find out again next year.

For more information on the trails in the Cairns region, check out www.ridecairns.com.