My partner Chris Turnbull and I had been living in Australia for four years. The singletrack scene in Australia is plenty varied, with something to please every palate, but during our visit to Dunedin, NZ, I wanted to take my bike backcountry Kiwi-style.

After a week of scooting out for quick rides on the local trails between rainy spells (very Dunedin), Chris and I were ready for something a bit different.

We got up early, our sights set on the Otago high country, about an hour and a half out of town. With the tank of the Toyota Hilux full of fuel, and our tummies full of coffee and servo pies, we headed inland. The roads got quieter and narrower. The Old Dunstan Road, where our bike ride was to start, was a winding shingle road at the base of the Rock and Pillar Range. [private] 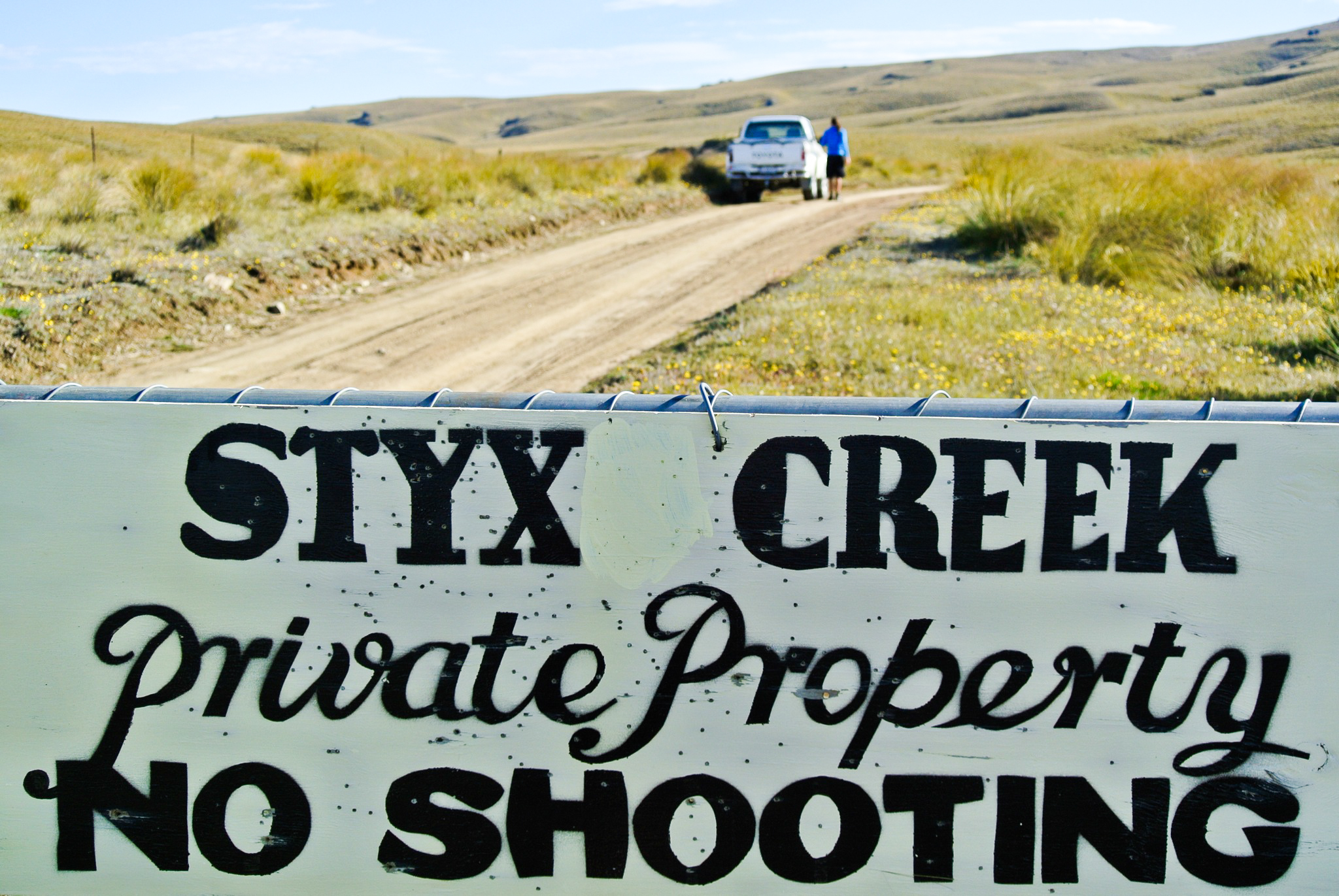 On route to the trail head.

Chris and I chatted about the tussock-land we were driving through. The tumbling slopes and gently curving ridgelines of the range shone like beaten gold under the wide, pearly sky. From the road, the range looked like a Graham Sydney painting, all smooth, soaring planes and flawless skylines. Nothing like the kinds of environments we usually rode through in Central Australia.

We pulled up at our trailhead – a narrow four-wheel drive track up to the skyline. Chris looked about. ‘No cafes, no hordes of people: it’s not a bad spot,’ he said.

‘Yeah, but will the riding be any good?’

‘Only one way to find out.’

We grabbed the bikes off the back of the track and loaded our packs on our backs. I paused by the truck for a moment to watch Chris begin his ride up the hill.

The track, really no more than twin muddy scratches in the hillside, twisted and buckled up the tussock slope. As we slowly ground our way up the hill we discovered the damn thing got stealthily steeper. We dropped through the gears, heads down, lungs screaming. Chris slowly pulled ahead. Mercifully, he paused on a flatter section to take in the views and catch his breath. I slowly huffed my way up to him. 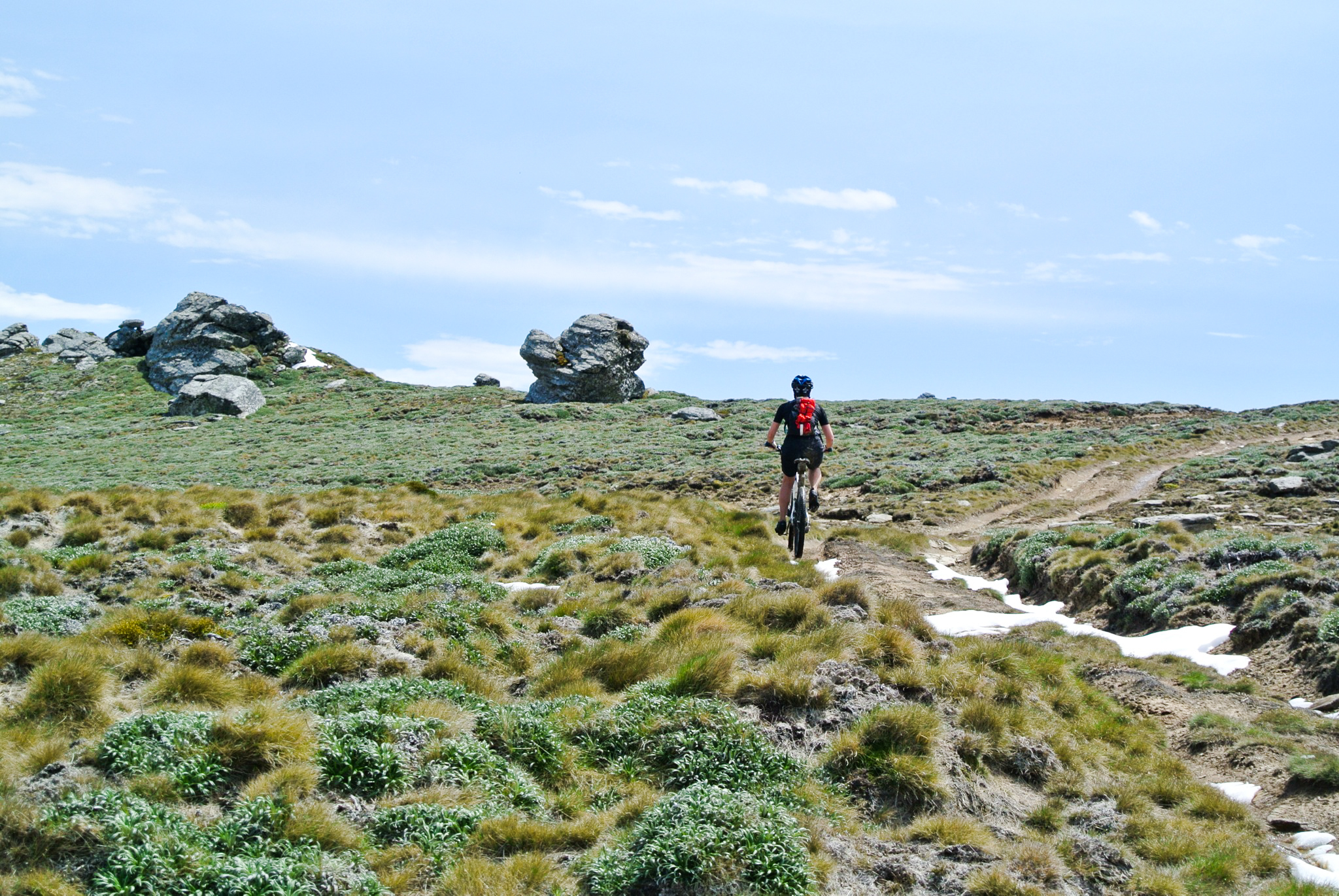 The wind in the tussock as the trail winds up the hill.

‘You alright?’ he asked.

We were aiming for a ski hut called Big Hut. We planned to have lunch there before retracing our steps to the truck.

Chris nodded. The track might have been made by four-wheel drives, but it was no highway for mountain bikes, and the riding was proving more challenging than either of us had expected. Keeping the wheels turning on these rutted tyre tracks, over gravel, tussock clumps and gnarled roots, was way harder than cruising along on groomed trails. 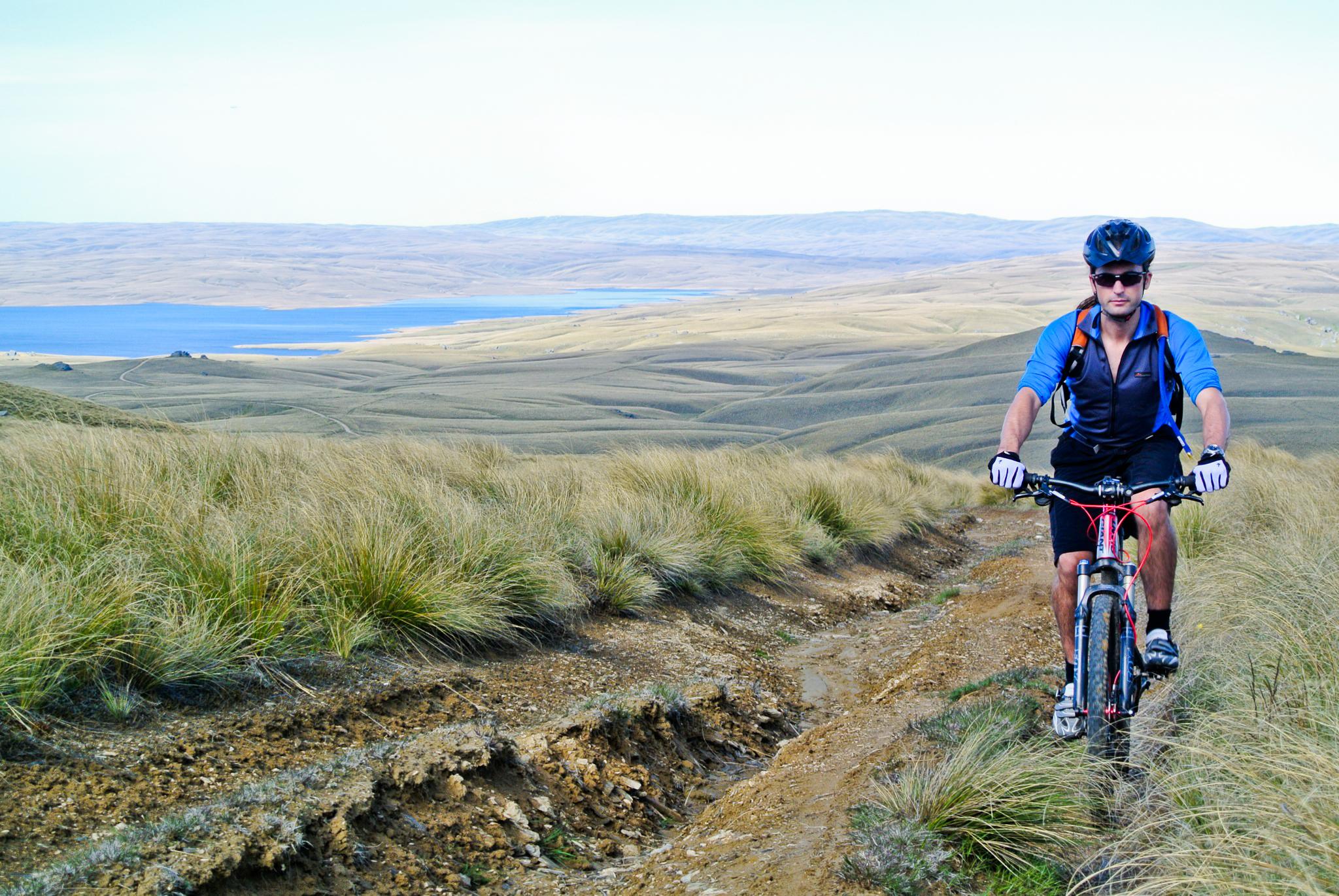 Riding through a Graham Sydney landscape.

Chris looked up the hill at the climb ahead. It was hard to tell where the true top was, but the climb would definitely steepen before we reached the tops.

We got back on the bikes and resumed our slow plod upwards. We stopped often to catch our breath and check out the views.

Up close, Sydney’s idealised rolling hills were packed with texture and movement. The tussock-lined hillsides are punctuated with species of native hebe and lichen, and piles of sharp grey schist. When we got to the tops, the wind was brutal, tearing at us and buffeting the tussock so it ruffled up like choppy water.

It was mid-summer, but we were riding through mud, water, and even divots of snow in shady spots on the track. Chris had perfected sand-riding when he rode through the Simpson Desert a few months ago, so the white fluffy stuff barely registered as an obstacle to him. Not to be beaten, I screeched along, hoping my momentum would get me through the snow too. But when I tried to follow Chris’s tracks through a longer patch, I lost traction in the slush. I dabbed a foot and stepped straight into a puddle of icy water.

Determined to share the fun, I baited my dares with care: ‘Hey, Chris,’ I called back after trying to ride through a treacherously deep snow slough. ‘Ride through this section without putting a foot down and I’ll buy you two Kiwi beers and a whole bottle of Central Otago pinot. You won’t even have to share.’ 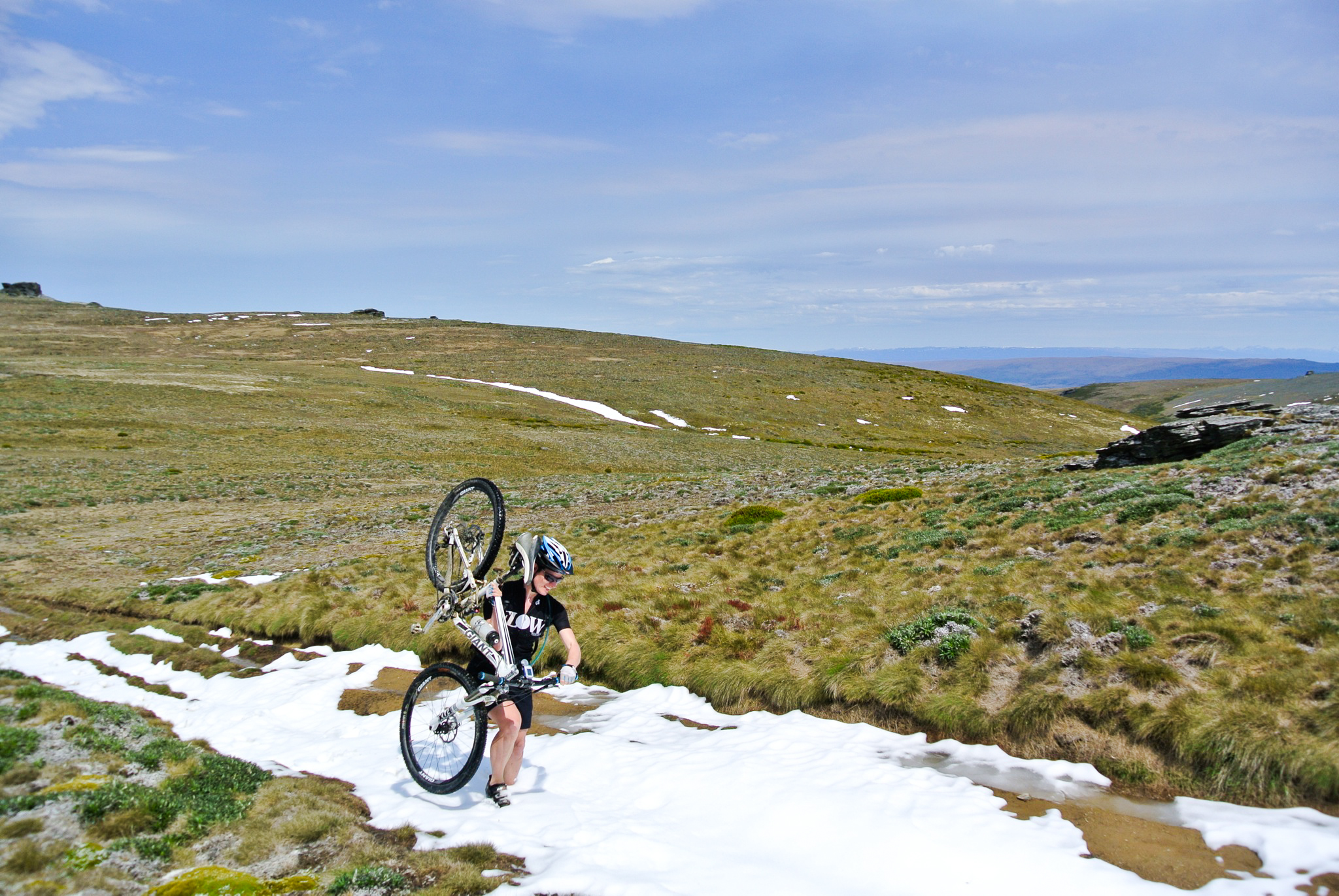 Nic gets her feet wet in the summer snow (melt).

Chris pulled up at the beginning of the snow-melt and slush. Clouds reflected off the still water, making it hard to gauge the depth of the puddle. Chris eyed it thoughtfully – not a good sign. Then he wheeled his bike up off the track and rode through the knotted clumps of vegetation and rock on the side of the track.

Time was getting on. Aware we were due back in town for dinner, we slogged up the climbs and ripped down the descents, expecting to see Big Hut at any moment. But the tops just seemed to roll on and on.

Eventually, Big Hut came sight, just across a shallow valley. We could get there by following the track, which continued on and then arched back around, or we could try going cross-country. I knew Chris had been itching to try riding through the hebes and tussock. With the clock ticking, I voted for the most direct route too. We lifted our bikes over a barbed wire fence and set off at a renewed pace. 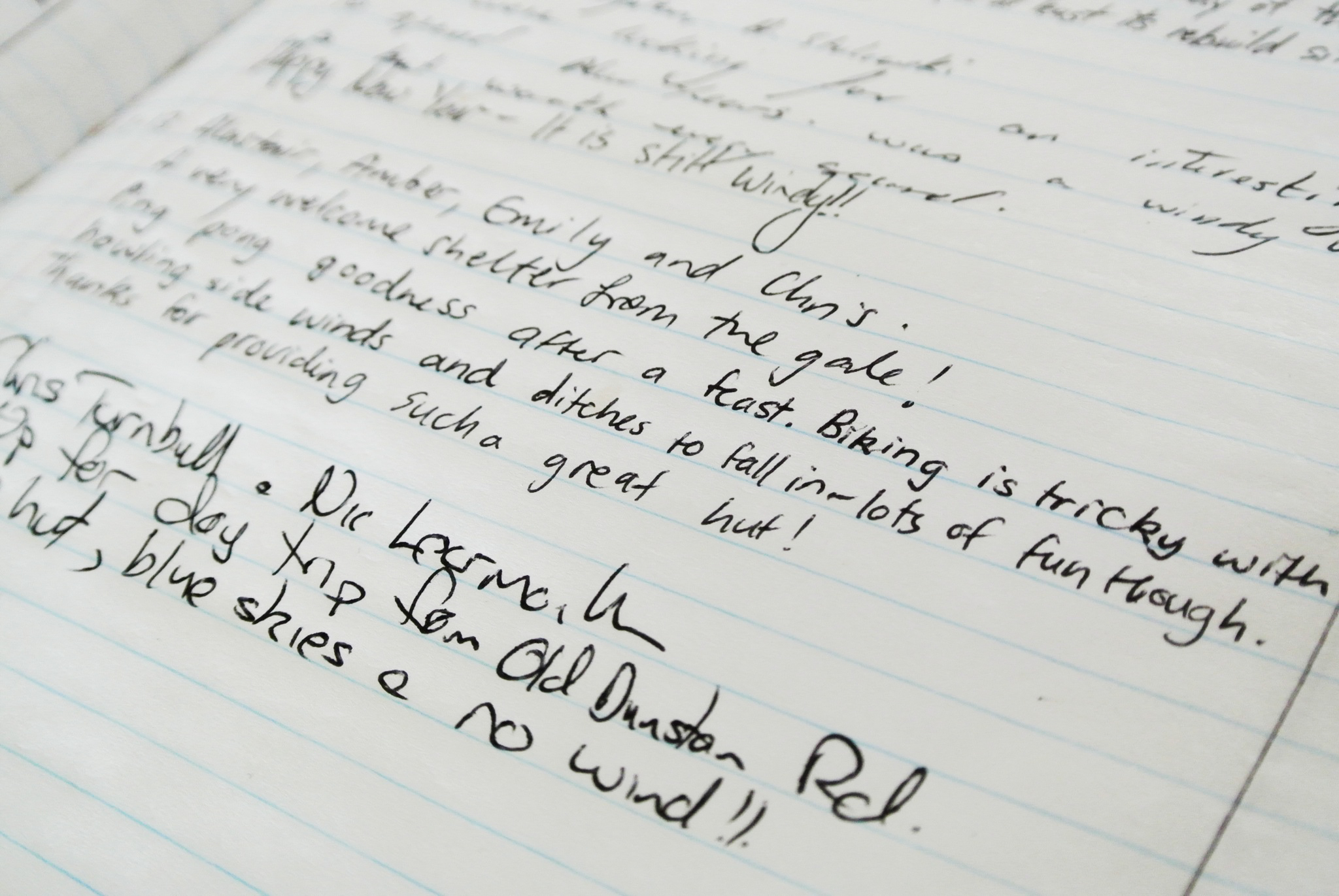 The hut book: ‘The biking is tricky.’

Turns out, riding off-road – proper off-road – is hard. We had to dodge prickly Spaniards while trying to hold a line through lumps of tussock and rock and over knotted ground. About 60 metres from Big Hut, the ground got soggy – a marsh. No wait, a creek. Full of snow-melt. We were walking our bikes by now. Chris turned to me, one foot in the water, the other still raised, to ask if I had found a drier way through. No such luck.

At Big Hut we wandered around the building, eating at full speed, trying to refuel for the return trip.

When we finally grabbed our bikes and started to reverse our steps across the marsh to the four-wheel drive track, things were not looking good. We seemed to be going slower than before. For all its gentle-looking rolling tops, the Rock and Pillar Range is still an alpine environment, and the weather can clag in at any time. This was no place to get caught after dark in just cycling gear. 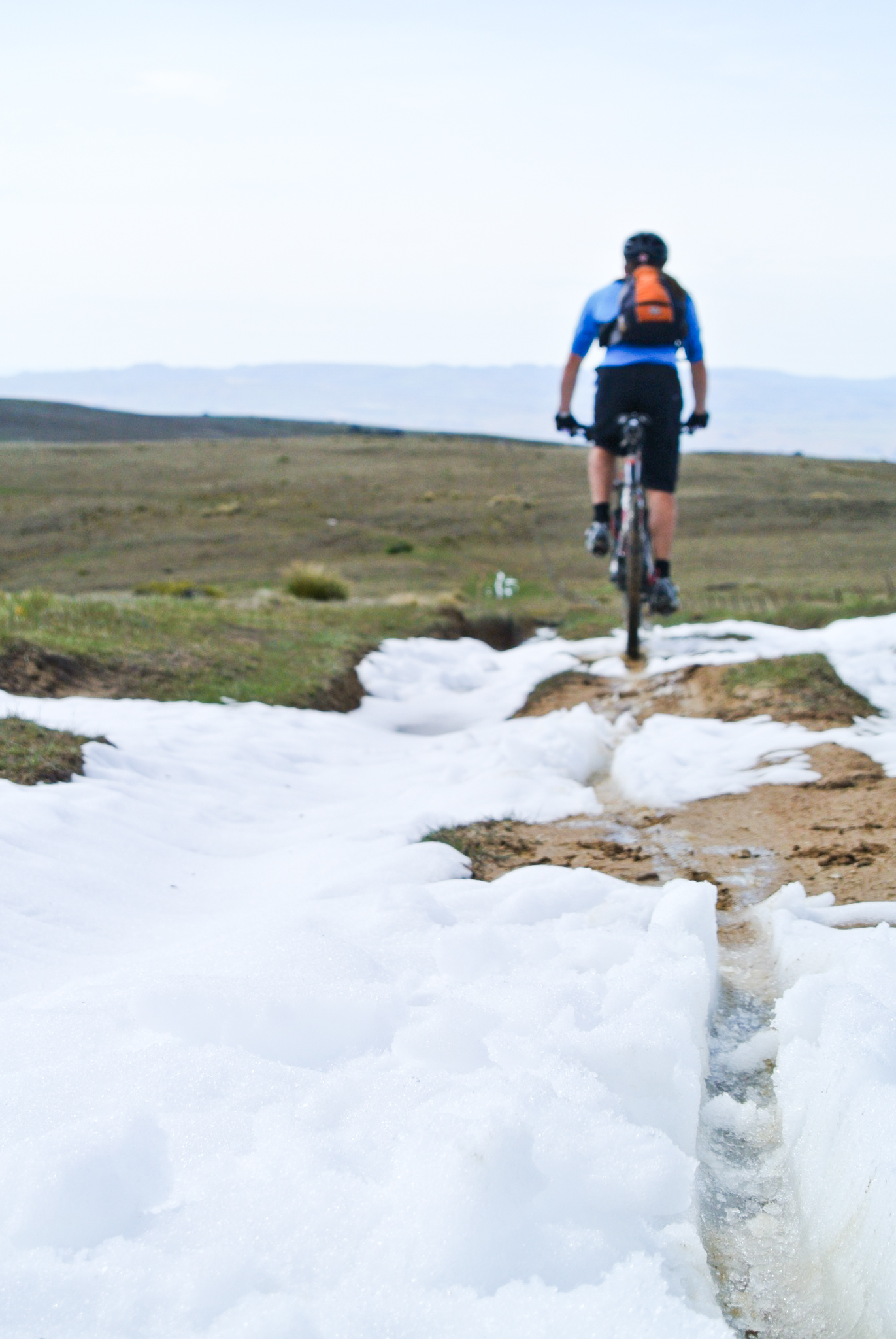 Chris stylin’ it through some of the last remaining snow patches. Lucky it was mid-summer as it would have been far worse earlier.

When we got back to the four-wheel drive track, the wind was battering at us and I was so cold and tired I was moving in slow-mo. Chris handed me some beef jerky. I chewed on it methodically and then fished a gu from my bag. I was so stuffed I swear I could feel these new sugars and grease hitting my blood stream.

Then we got back on our bikes.

Lucky for me, despite the undulating ground, the track did have a governing gradient. We fairly flew across the tops. When we paused for one final fuel stop before starting our descent proper, Chris pointed to the truck, parked far below.

‘Over there, look. That white dot.’

It was miles away. Then Chris looked at me, and I nodded. We pointed our bikes down the hill and started the final descent.

Going downhill, those same steep, loose-shingle scars demanded even more attention. It would be so easy to lose concentration and choose a line that disappeared into one of those deep water ruts, sending me flying. Mud flicked up, the flecks splattering my bike, my arms, even my face. I rode on.

It might not be what we’re used to, but backcountry riding is berloody fun. 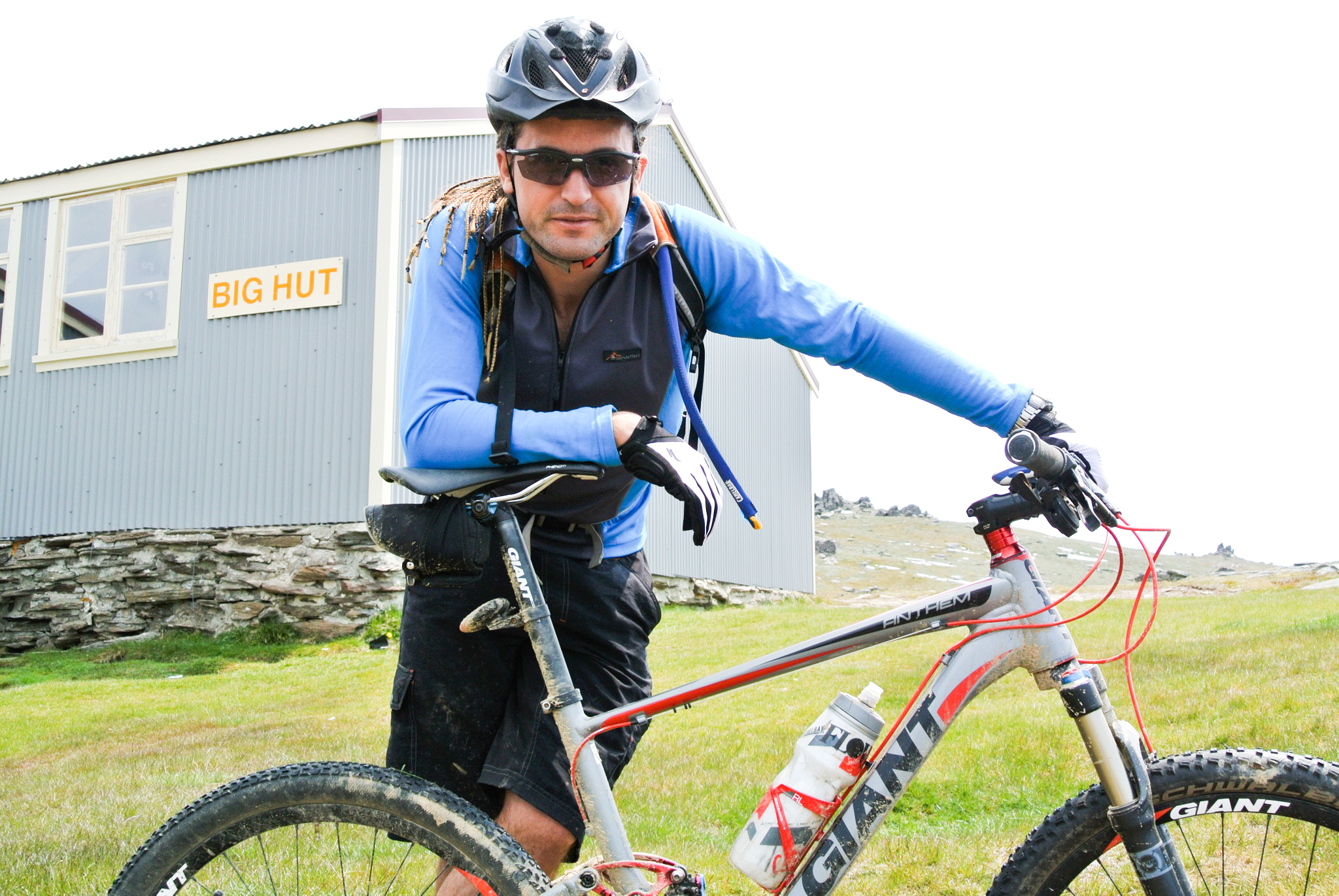 Chris outside the ‘Big Hut’. A great little lunch spot and well out of the wind.