With a fearsome reputation from the technical nature of the trails, the BC Bike Race is on many rider's bucket lists. We've heard many stories bodies and bikes pushed to the limit on epic singletrack, so we were keen to see how Australian stage race guru Jon Odams would fare when he went over to see so for himself. Join Jon as he picks a few good memories from his trip to British Columbia, it sounds like a lot of fun. 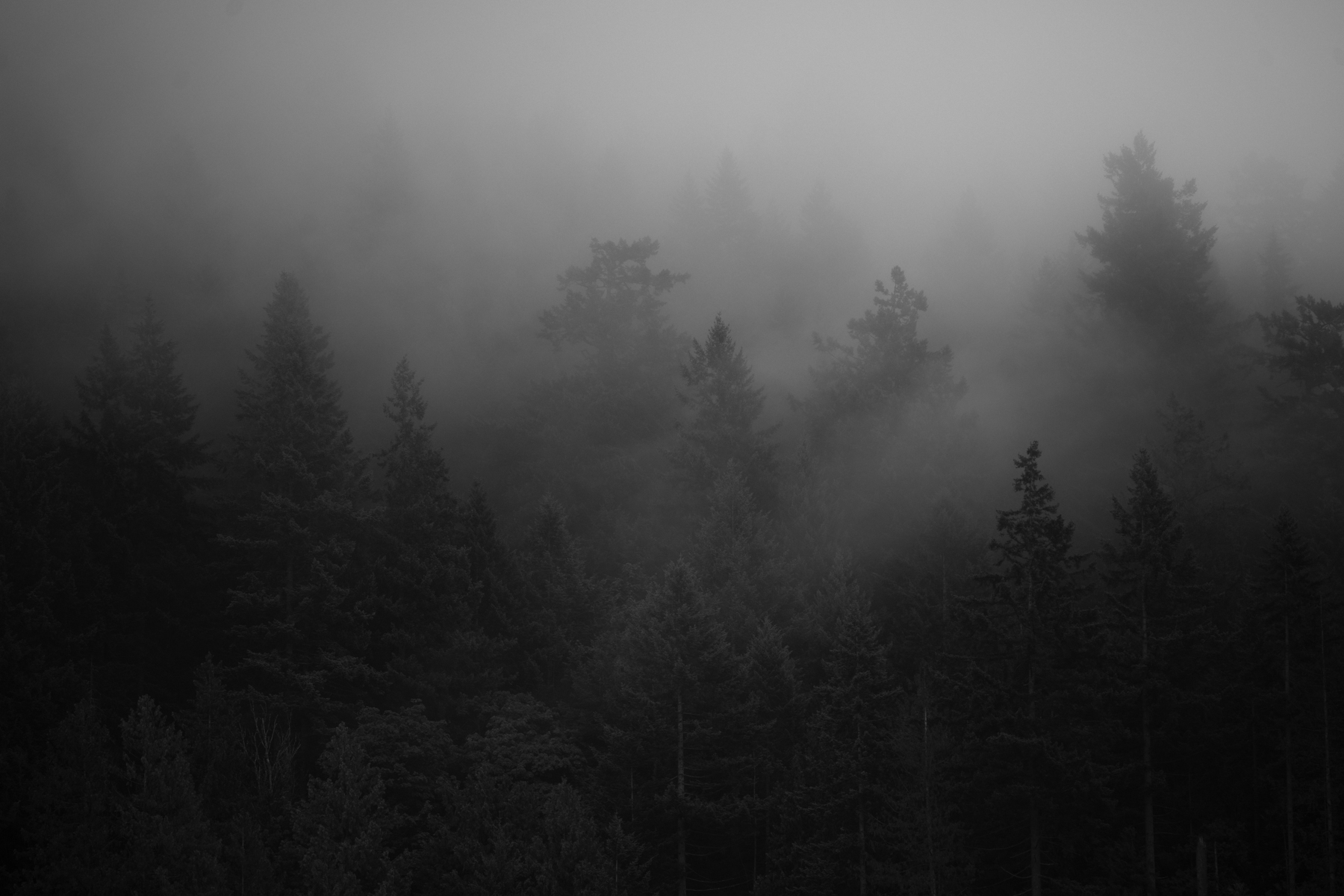 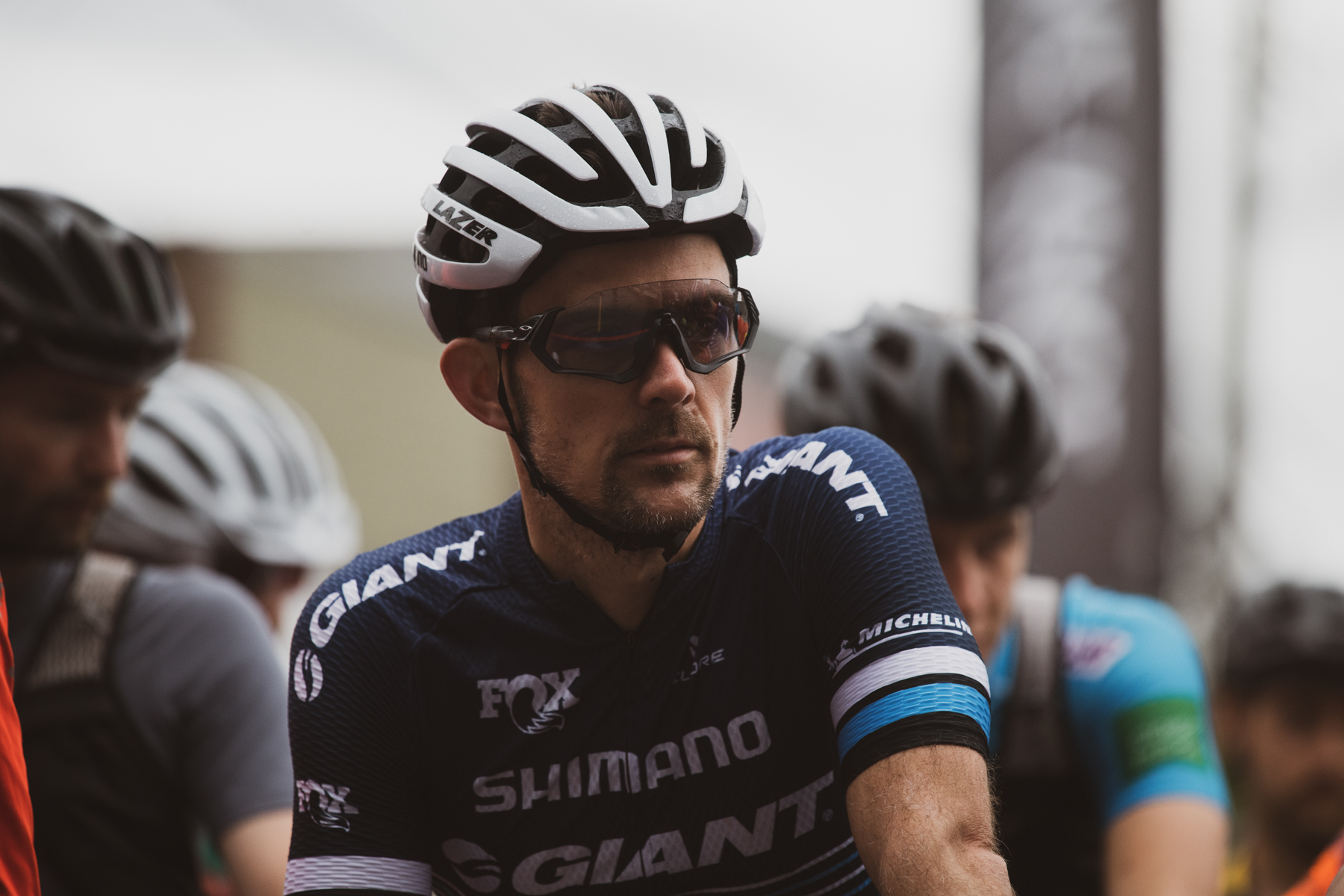 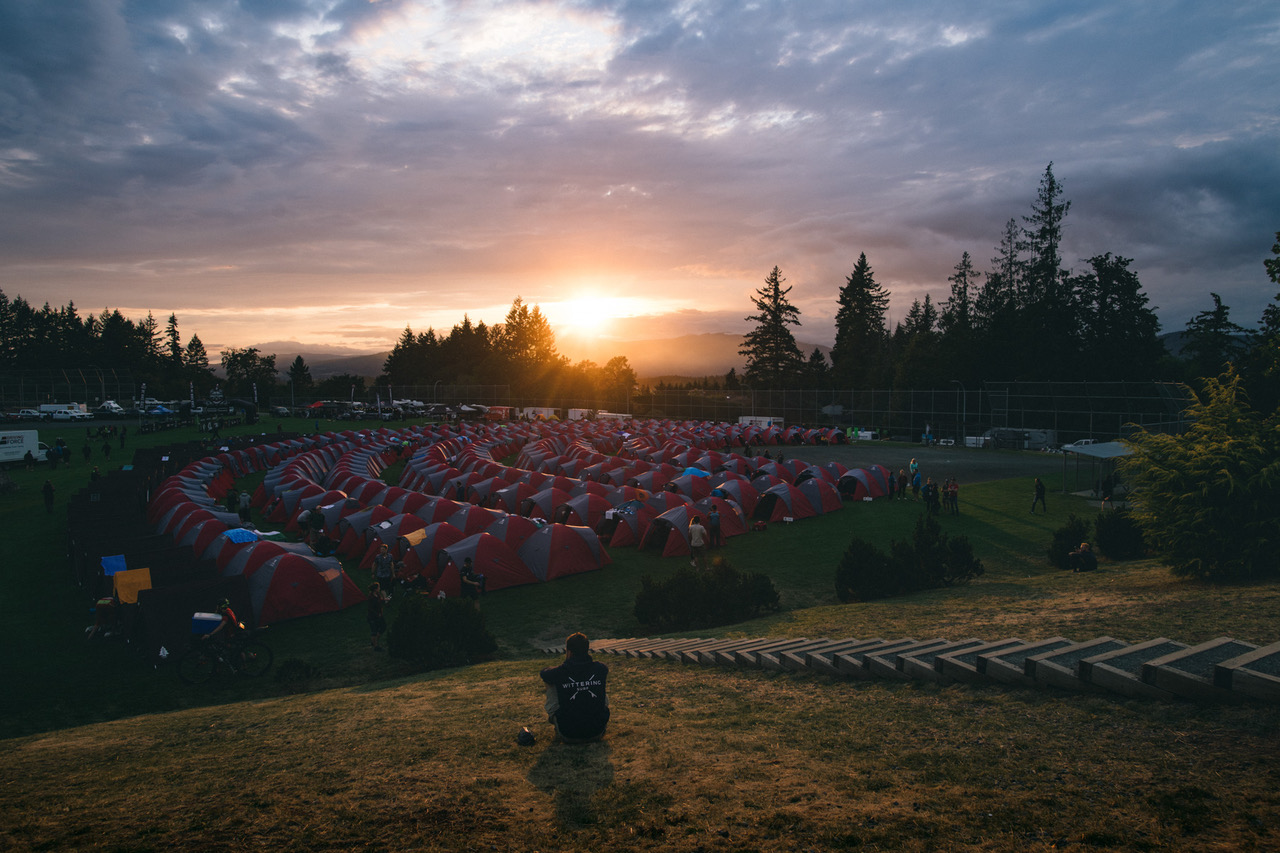 Campsite one – Cowichan was my first glimpse of the tent city that is the BCBR home for the next seven days. I’ll be honest, I don’t like camping (it is too in tents…), and the tent city was a little daunting to see at first. Tent mates were selected, and we all settled in for the race ahead. 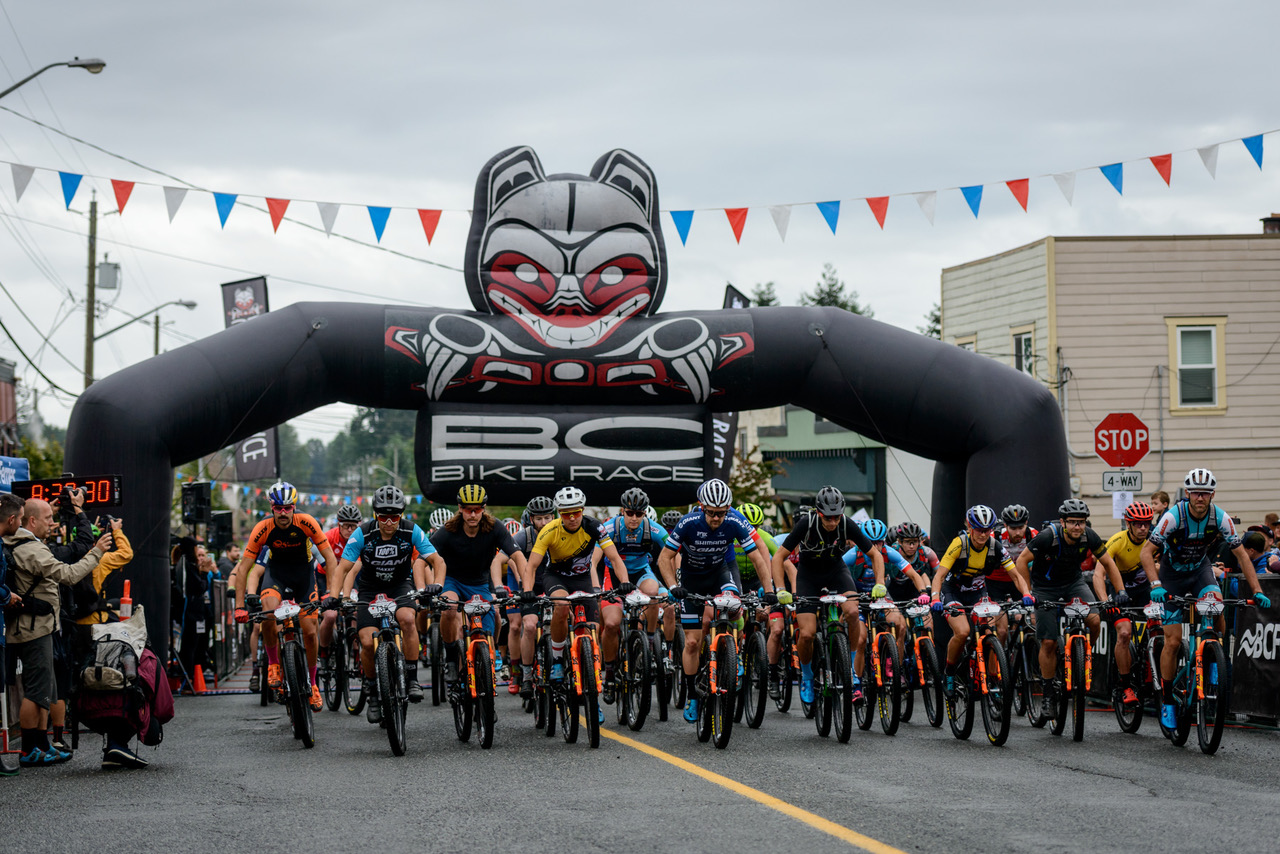 This is the town of Cumberland, apparently the BC equivalent of our Derby. It’s a small town with a lot of riders and a vast amount of lush trails to ride. The race took us up a selection of local mountains. There were so many trails here that both day two and three started and finished here — a must-visit for any MTB tourist. 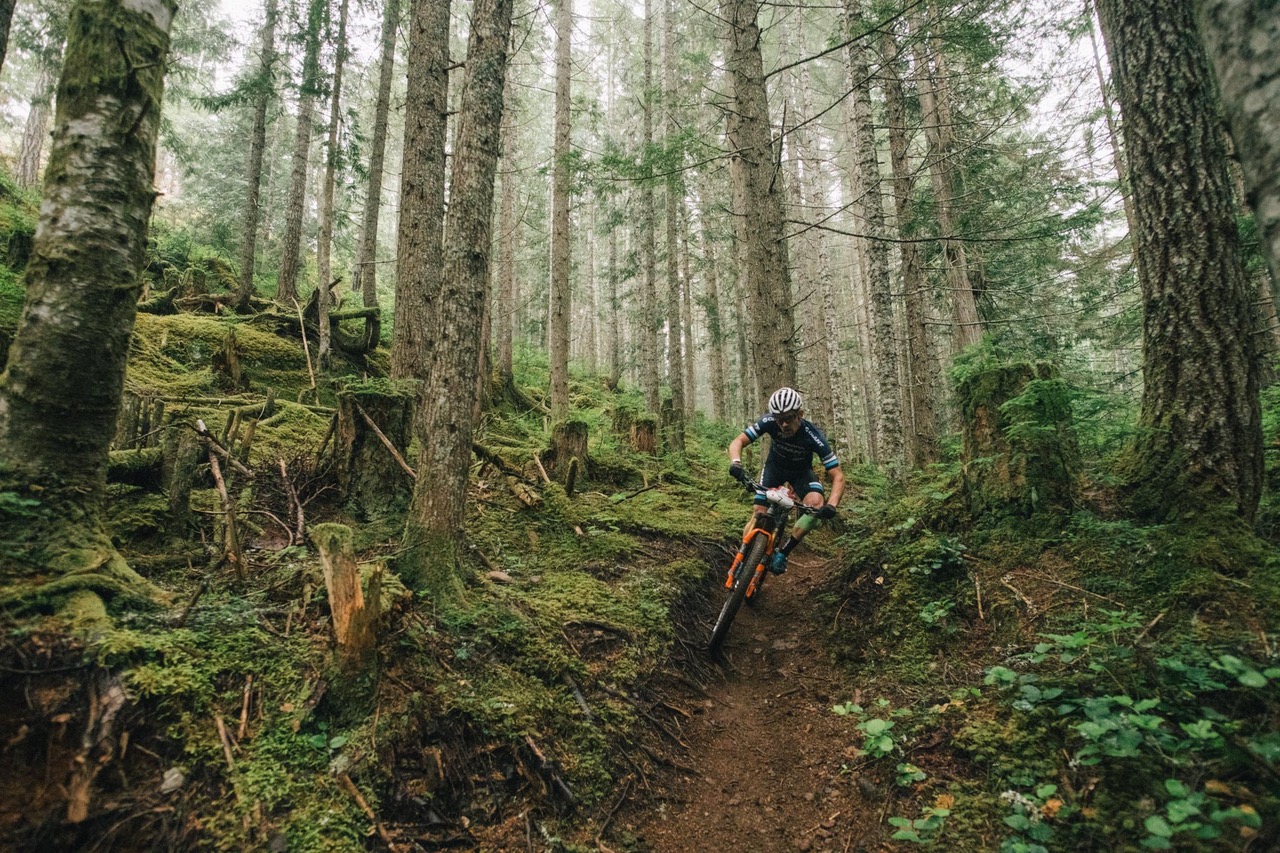 YES just about all of the singletrack looks like this. Dark loam dirt being held together with roots and rocks in sections. Even in the wet, the trails ride smooth, albeit very slick. 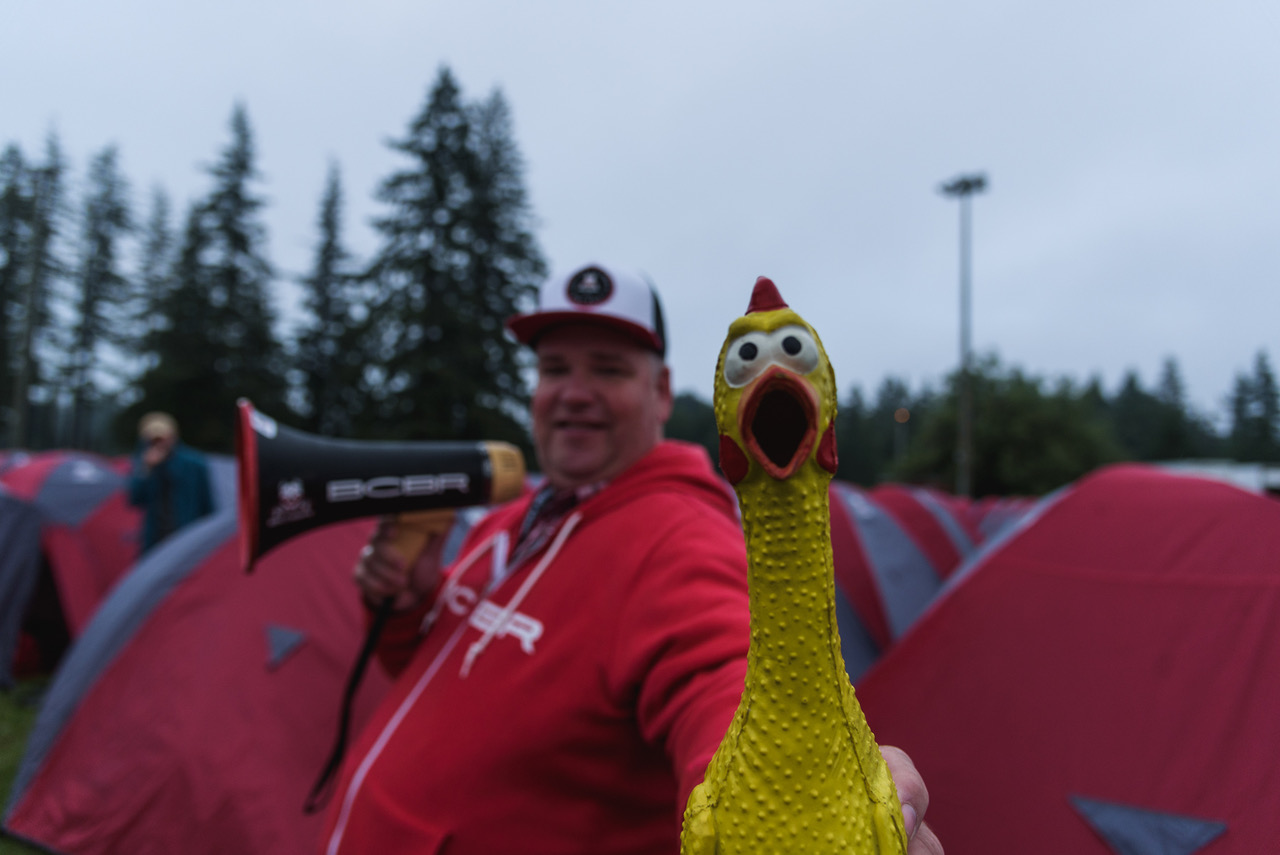 The wake-up chicken horn thing. The chicken thing is a wake-up call for all the races each morning at 6 am. The pack up /breakfast/race prep begins. I like to get the to the showers before everyone so I set the alarm a few minutes earlier. 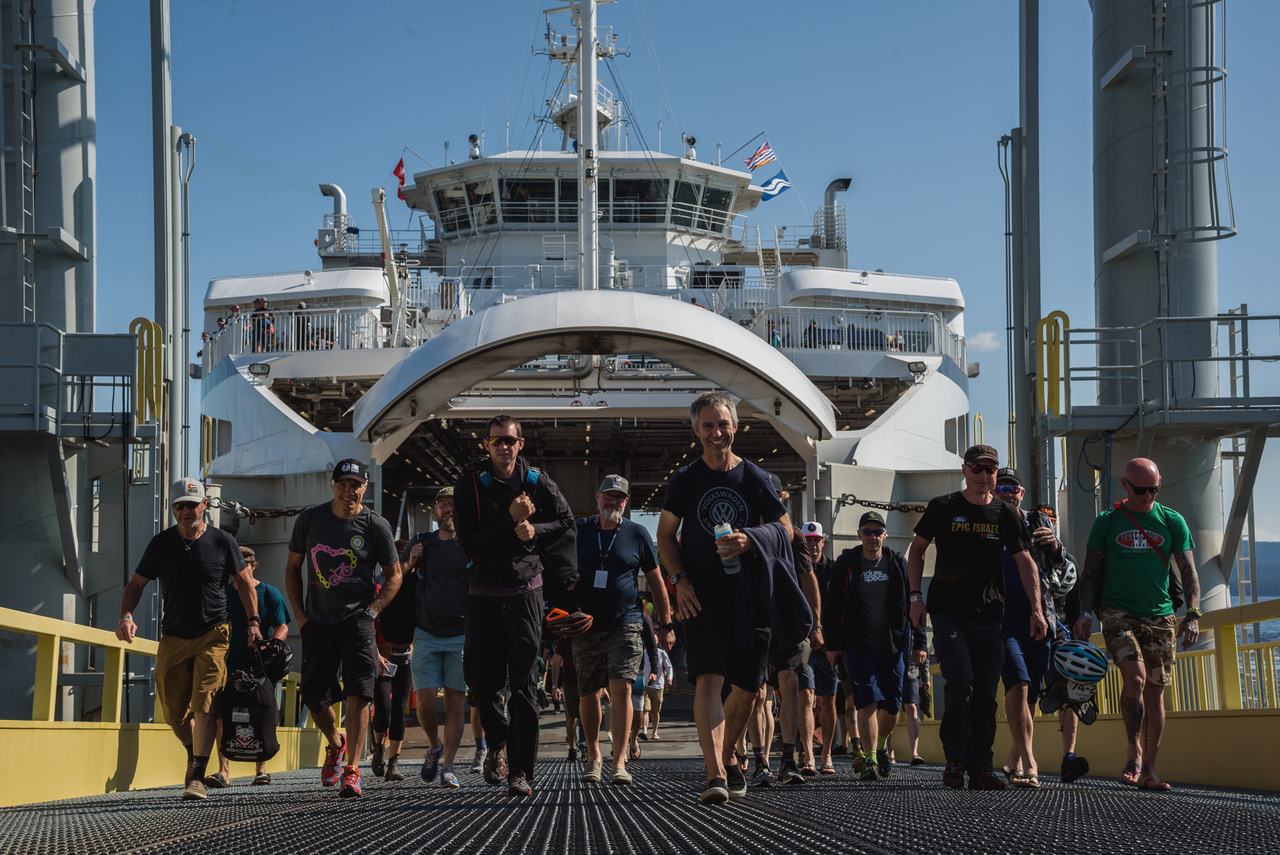 The transfer from Cumberland to Powell river was a nice Ferry ride for an hour or so from Vancouver island. This town put on a fantastic welcome with a band and a massive amount of locals cheering all the racers on as they departed the ferry and walked a few blocks along to the next campsite. They are located on the beach, the sun was shining, and life was good! 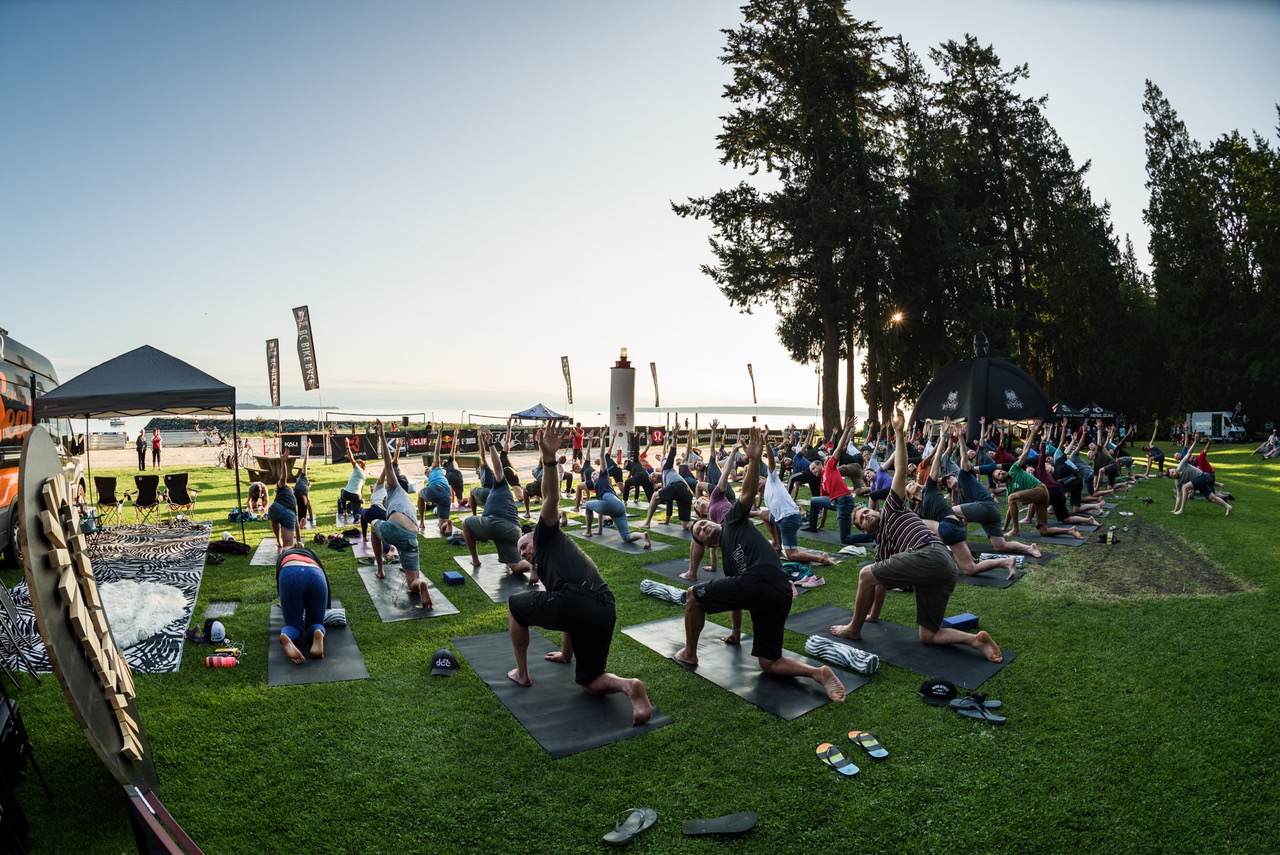 Yoga anyone? Lululemon provided a daily yoga session after dinner for all the riders. It was interesting to see the numbers grow as the races went on. Young or old, fast or slow, it’s nice to see all the riders chilling out together and getting a gentle yoga stretch on. This shot shows yoga on the beach at Powell River. 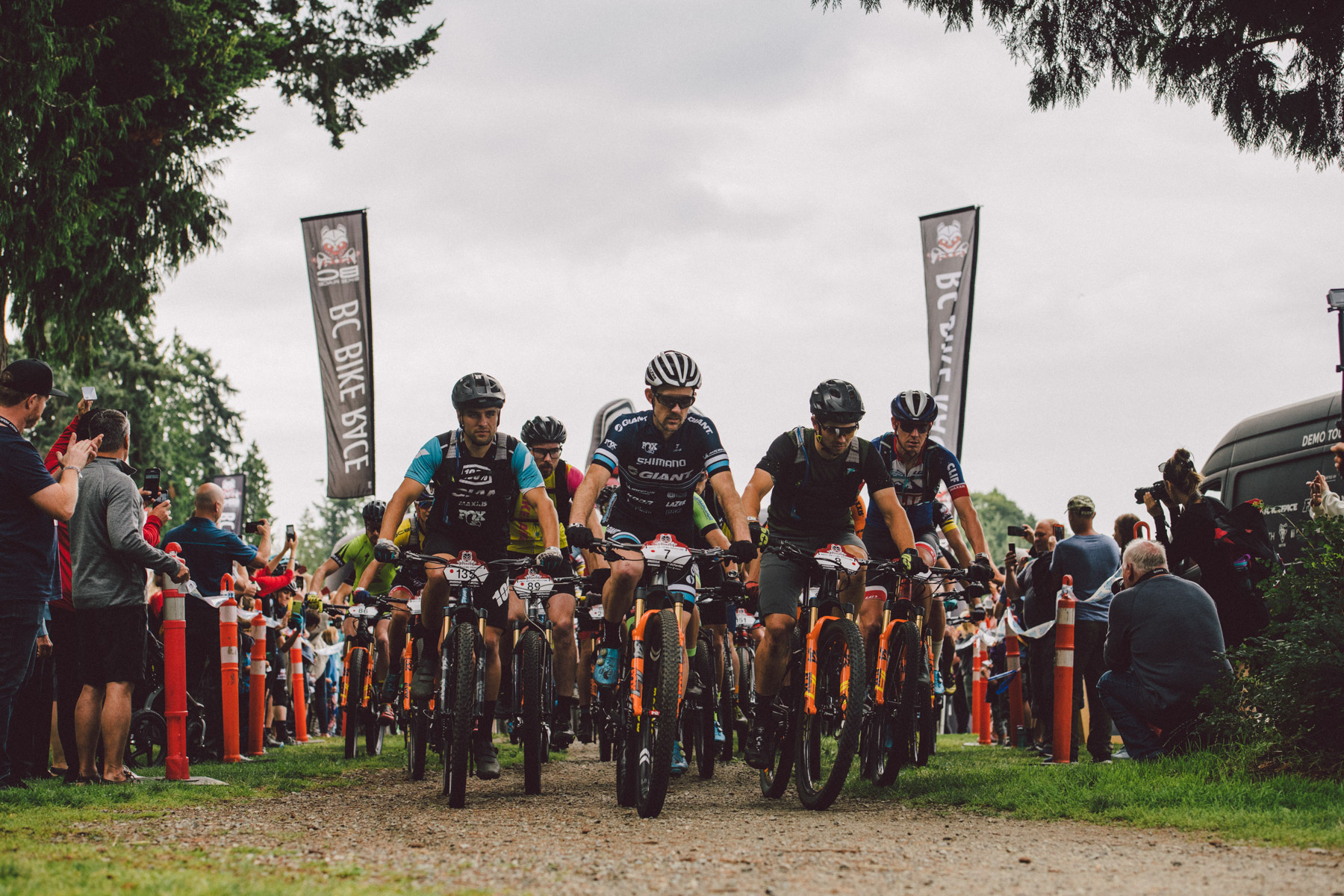 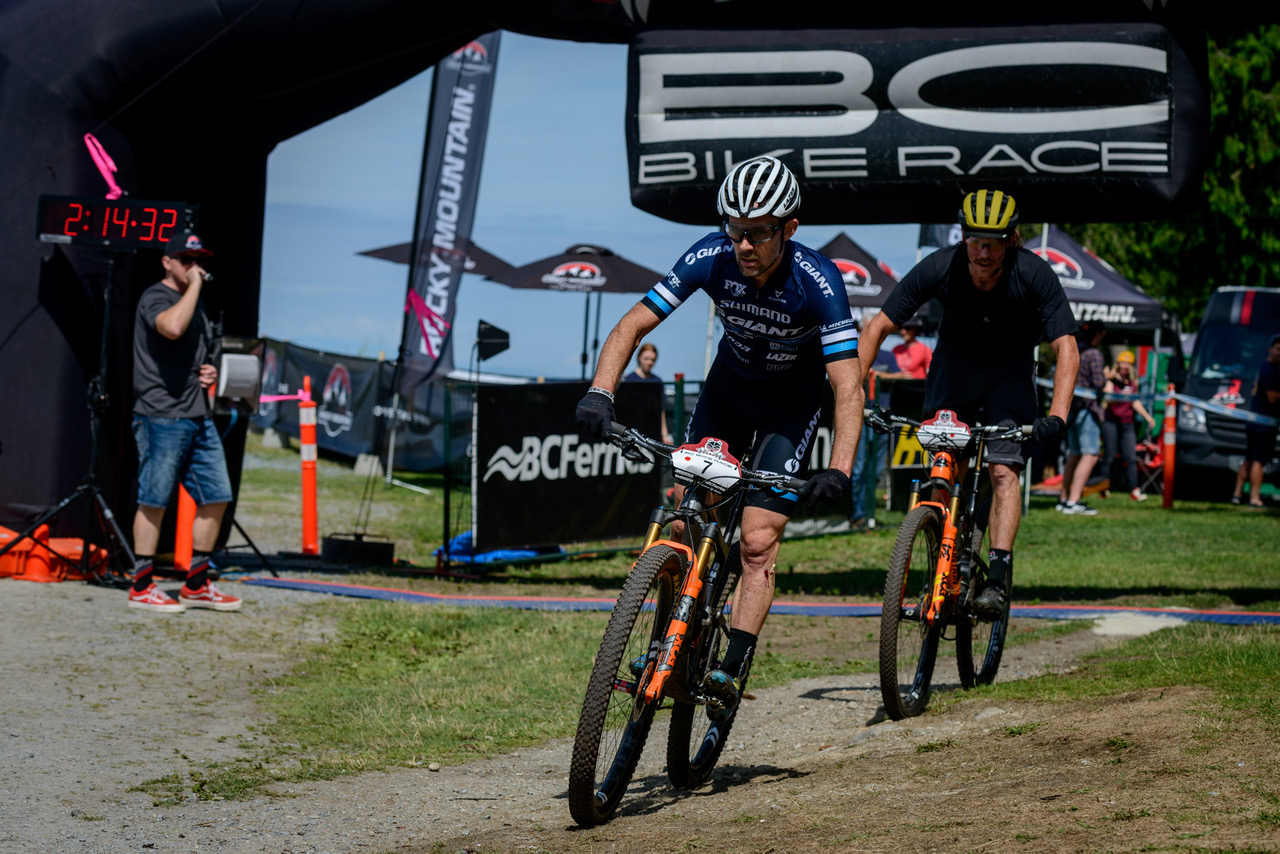 Stage 4 started and finished on the beach right next to our camp. It was the shortest and also had the least amount of elevation of the race stages. I sat in the front bunch for the day, staying calm and ready to jump at the line. I got too relaxed and clipped a pedal. I got up after sampling the loam but couldn’t chase back on to the lead group. Right behind is Sam Schultz, US Olympian and legendary trail rider. I had a blast shredding the single trails with Sam. 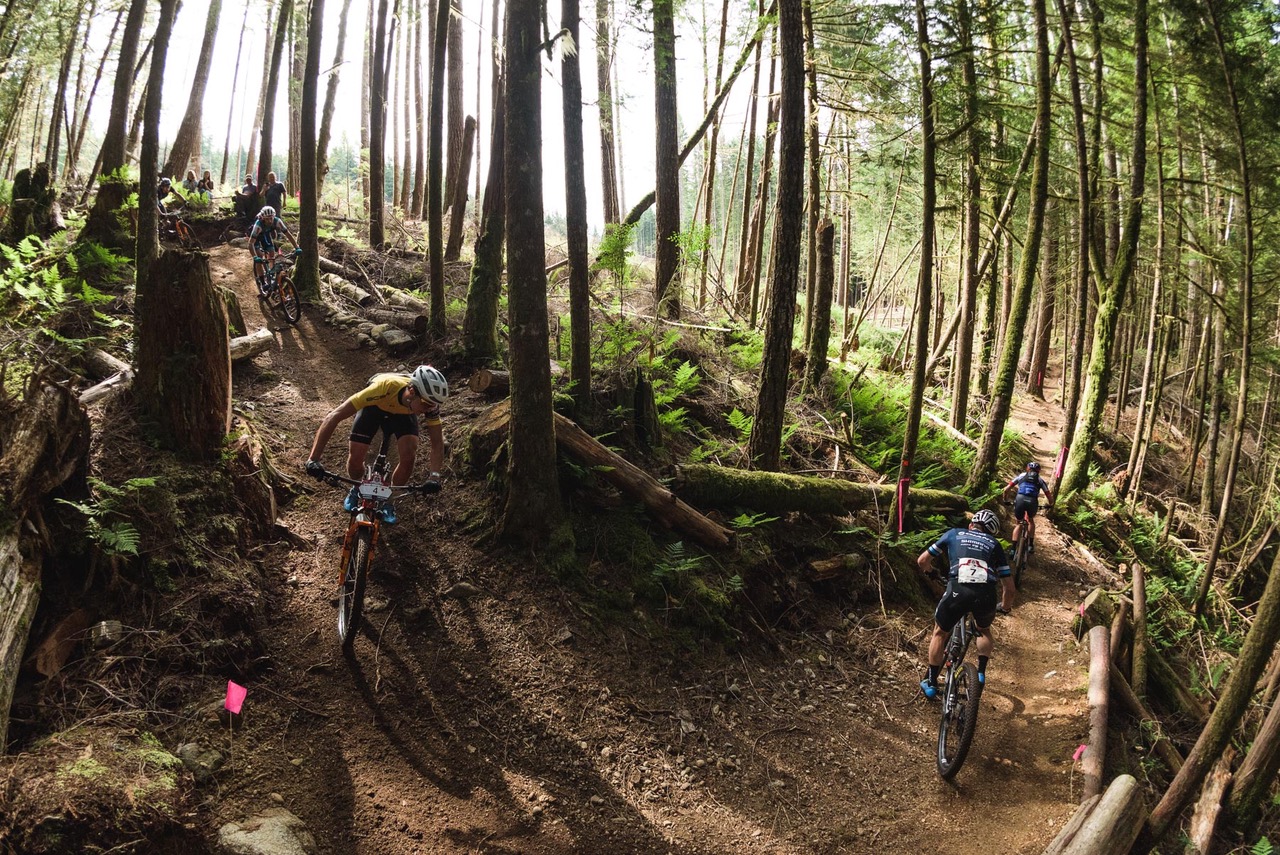 A new section of the trail early in the Powell River stage. Race leader Felix and mountain bike legend Geoff are just behind; It was an exceptional experience riding the trails with such an all-time cast in the lead bunch. Ben Soontag from the Clif Pro tem leading it out here, enjoying some of the smoother less challenging trails. 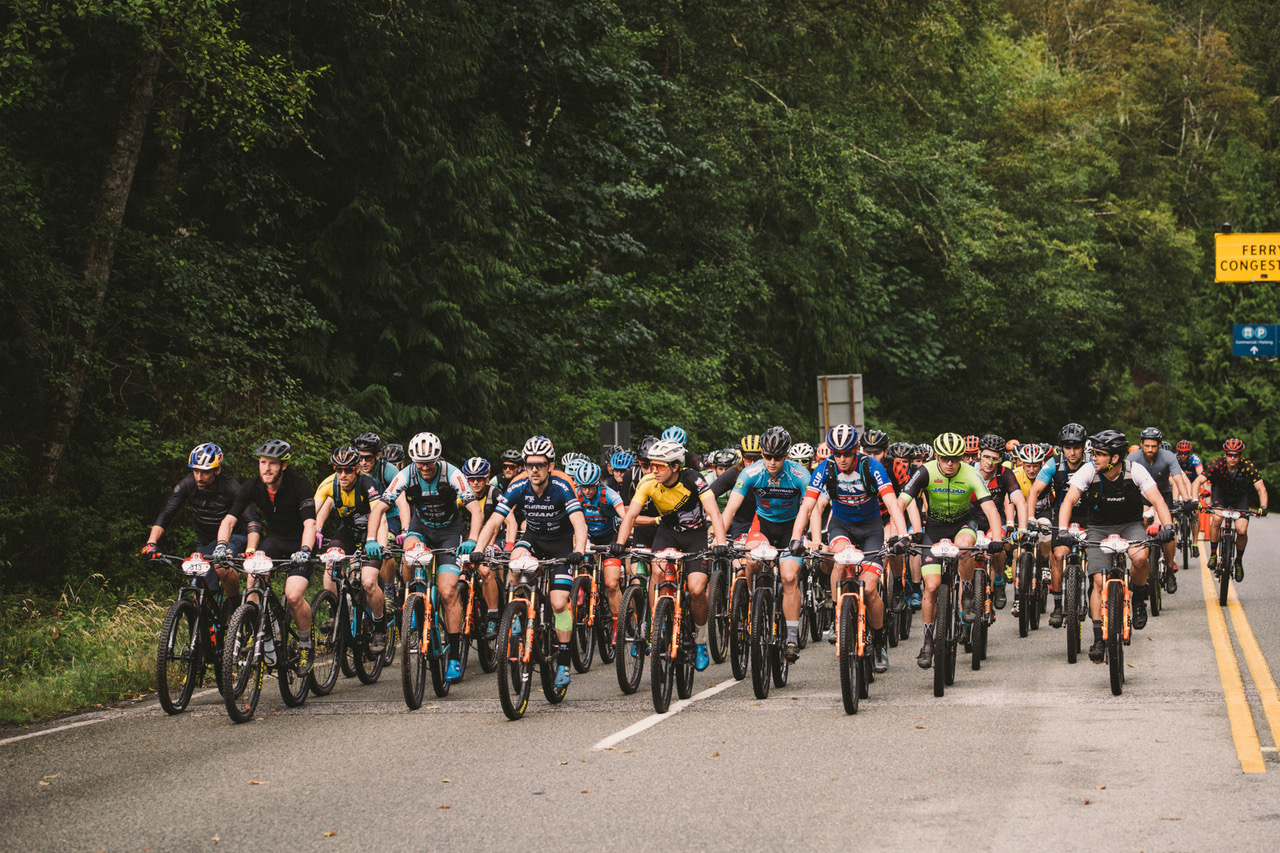 Stage 5 start in Earls Cove. The bunch was big with the whole 600 riders starting altogether. The race included the US and Canadian national CX champions, who would use their mud skills at the end of the stage once the rain started dropping. This was the longest stage of the race at over 60km and the most elevation gain. I was thrilled to have this one completed and roll in 5th place on the stage — a real tough day for me towards the end with the challenging conditions and extremely wet trails. The last ten-kilometre descent to the finish was a real test. 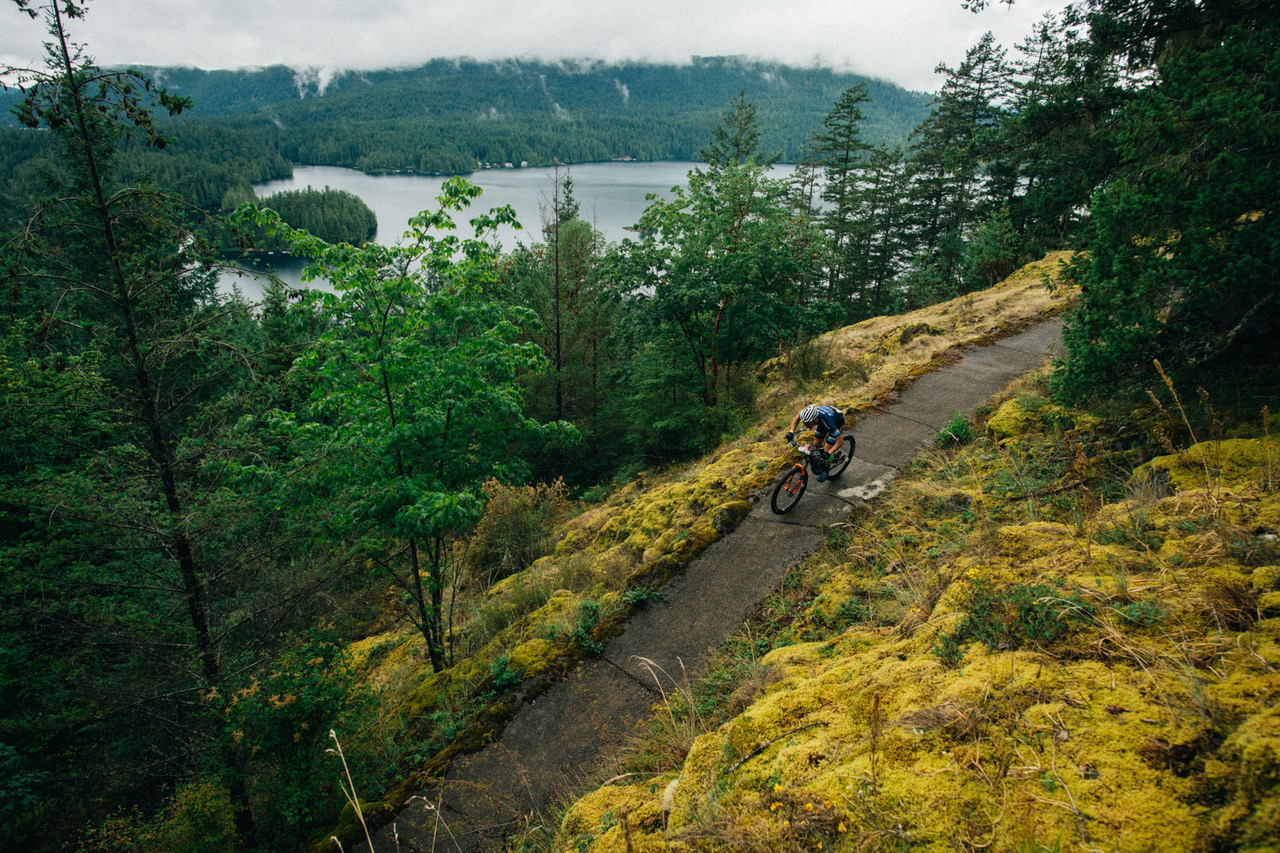 Somewhere in stage five on the walking path linking two climbing sections together. The pace was hard, and the climbing was steep. My Shimano XTR 32 x 51 drive train got a solid work out with some parts over 25% gradient. 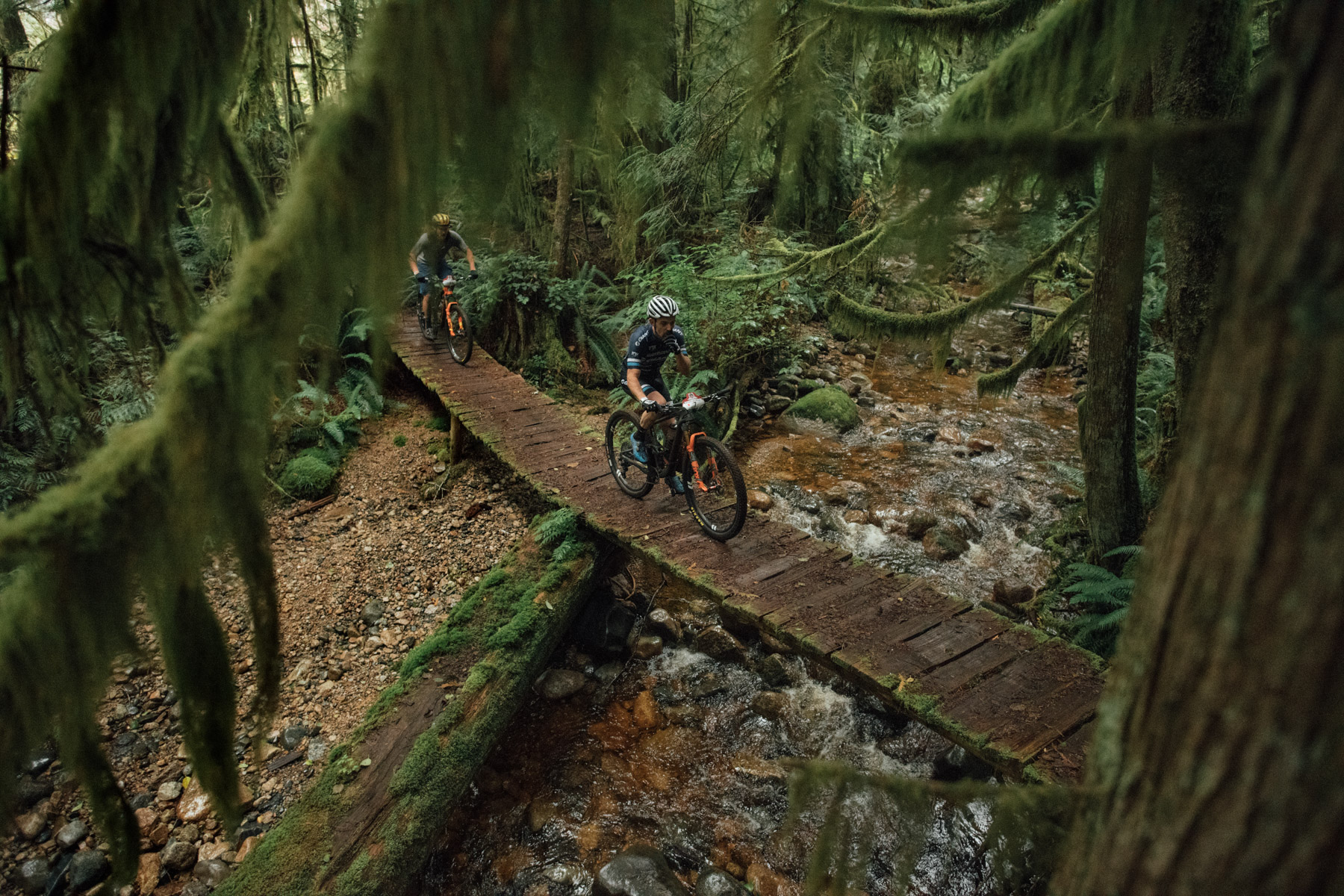 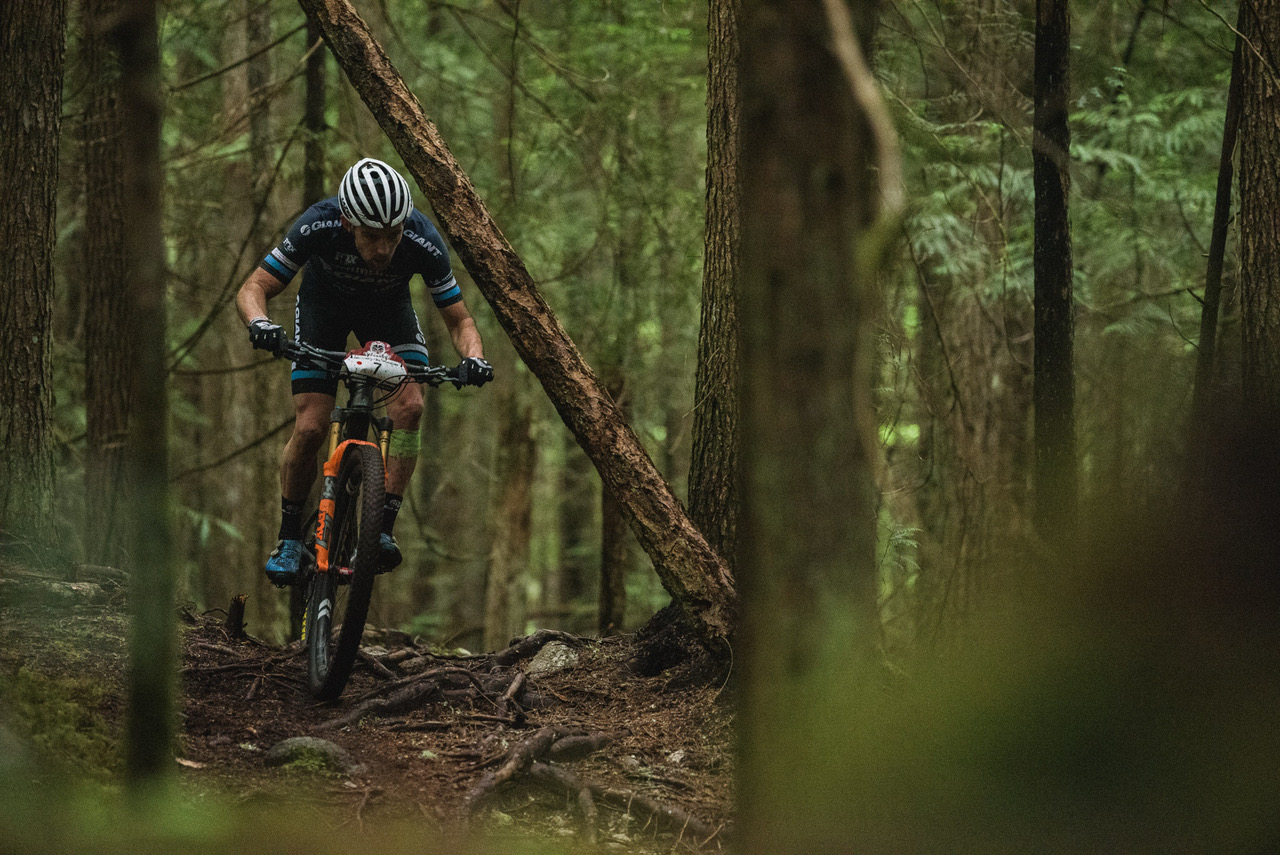 The final descent of day six was another epic descent of 8km to the finish line and ferry terminal. This shot was just after shows the slick conditions on a “drier” day on the BC trails. The casualties were pretty high on this stage was Ben from Clif breaking his wrist and several other riders heading to the medics post-stage to get re-assembled for the final stage in Squamish. 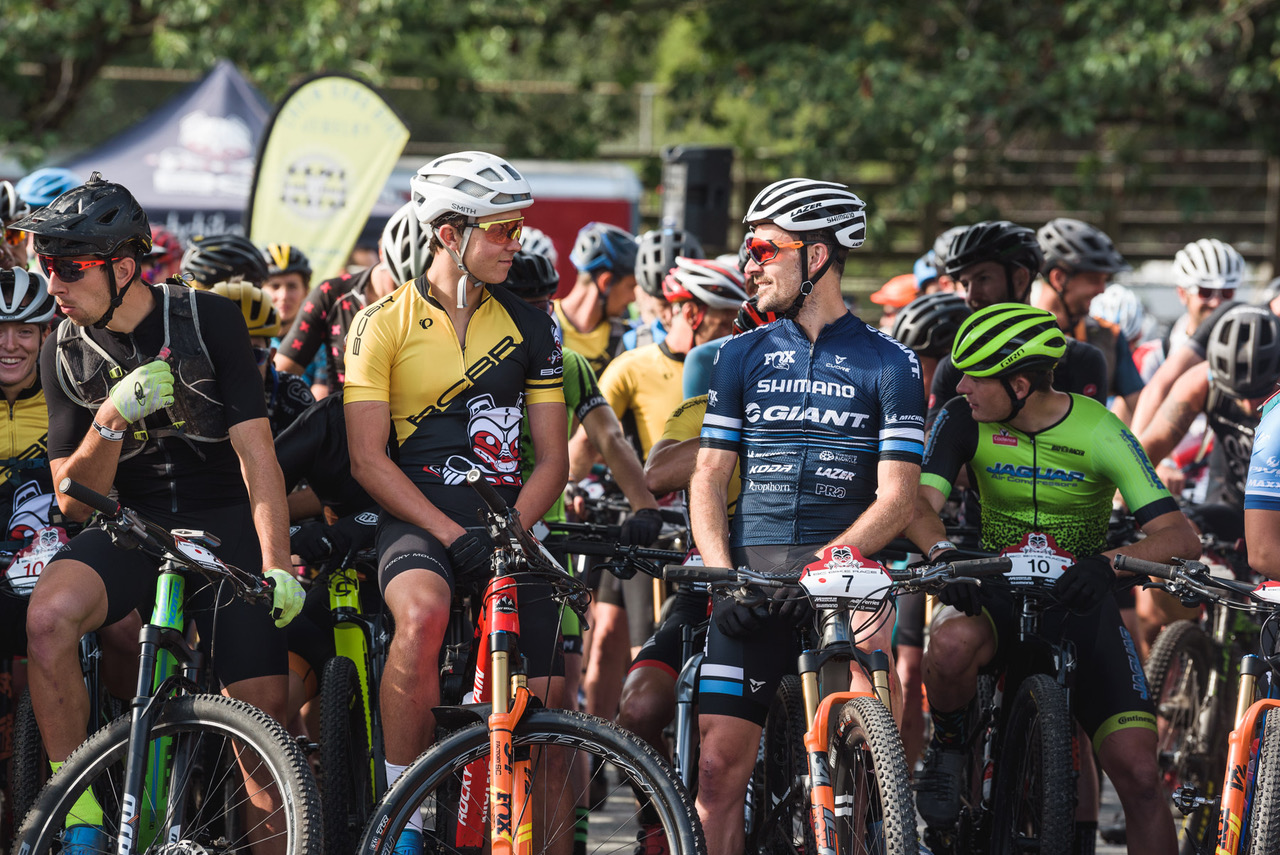 Felix Burke and I are talking about the inevitable attack that was going to come on the Squamish trails from local rider Geoff Kabush in a last attempt to regain the race lead. Sure enough on the first road section less than ten minutes into the race it began. Geoff and Felix duked it out with Felix getting away to extend his lead and win his first BC bike race ahead of the two-time winner. 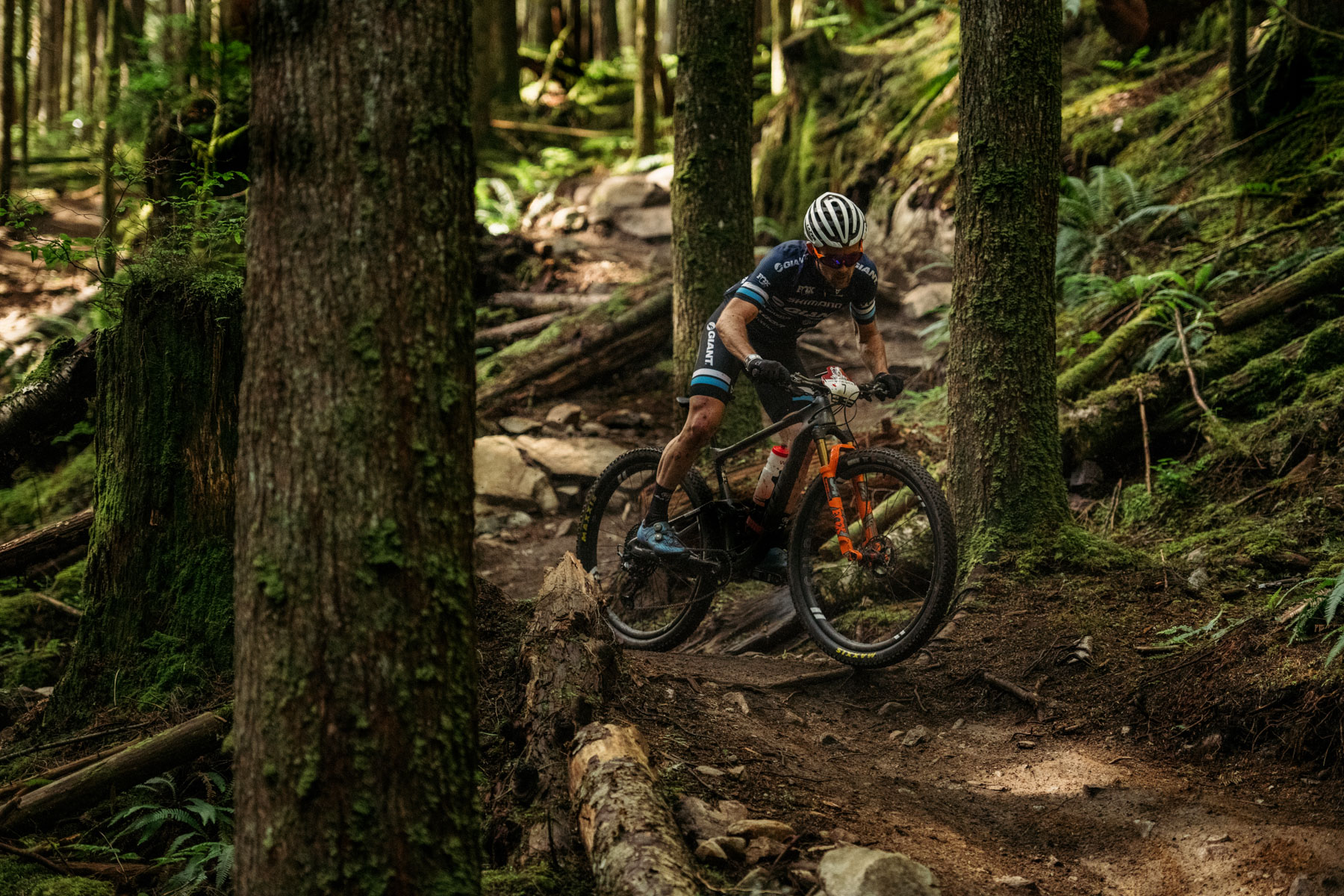 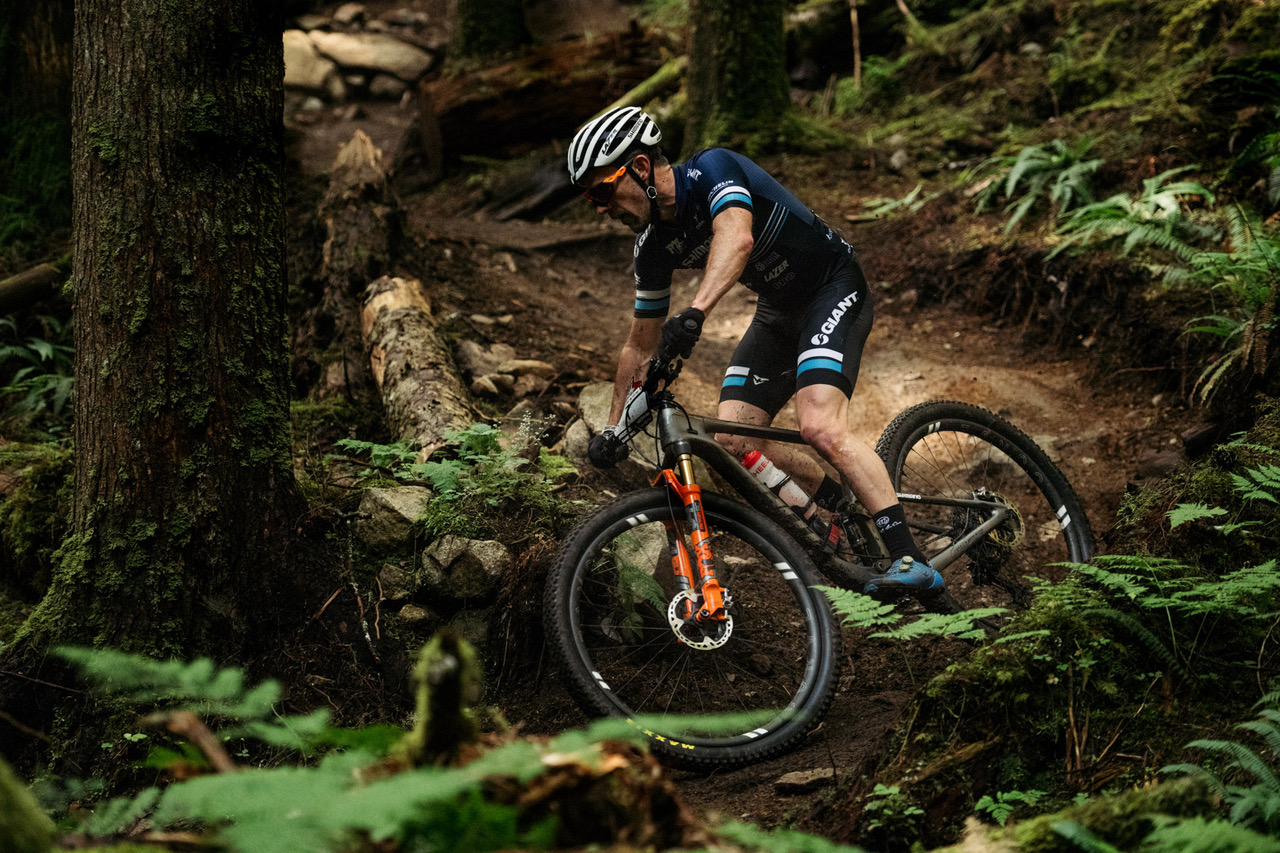 Squamish singletrack. It doesn’t get much better in my opinion. A lush green mix of dark loamy dirt, slick rocks and roots and technically challenging trails under the pine forest canopy. THink Rotorua trails but rougher and more technical. 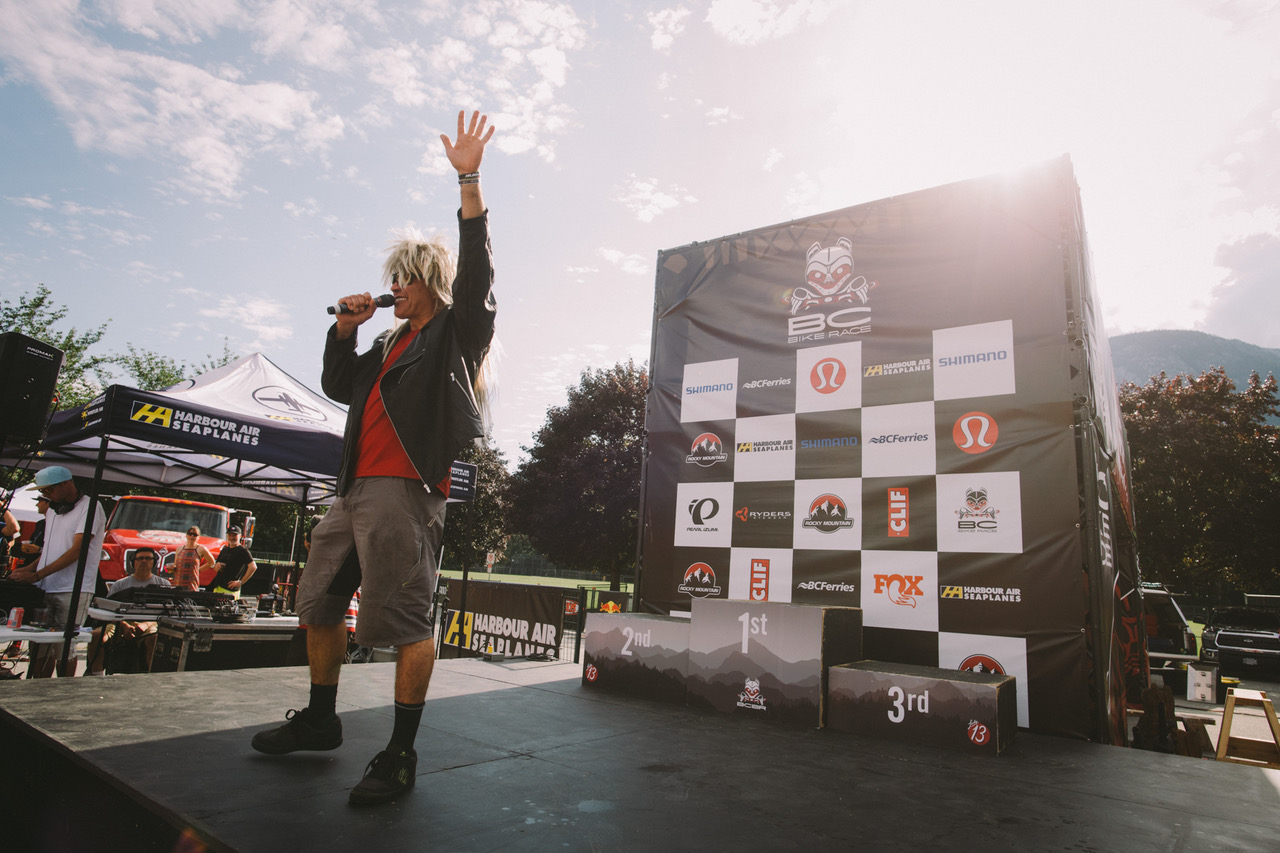 Brett Tippie MTB legend on the mic! Always a laugh was listening to the conversation coming out of this man. Just as much stoke at the finish line for the first rider as there is for the 400th. This guy kept everyone amped. 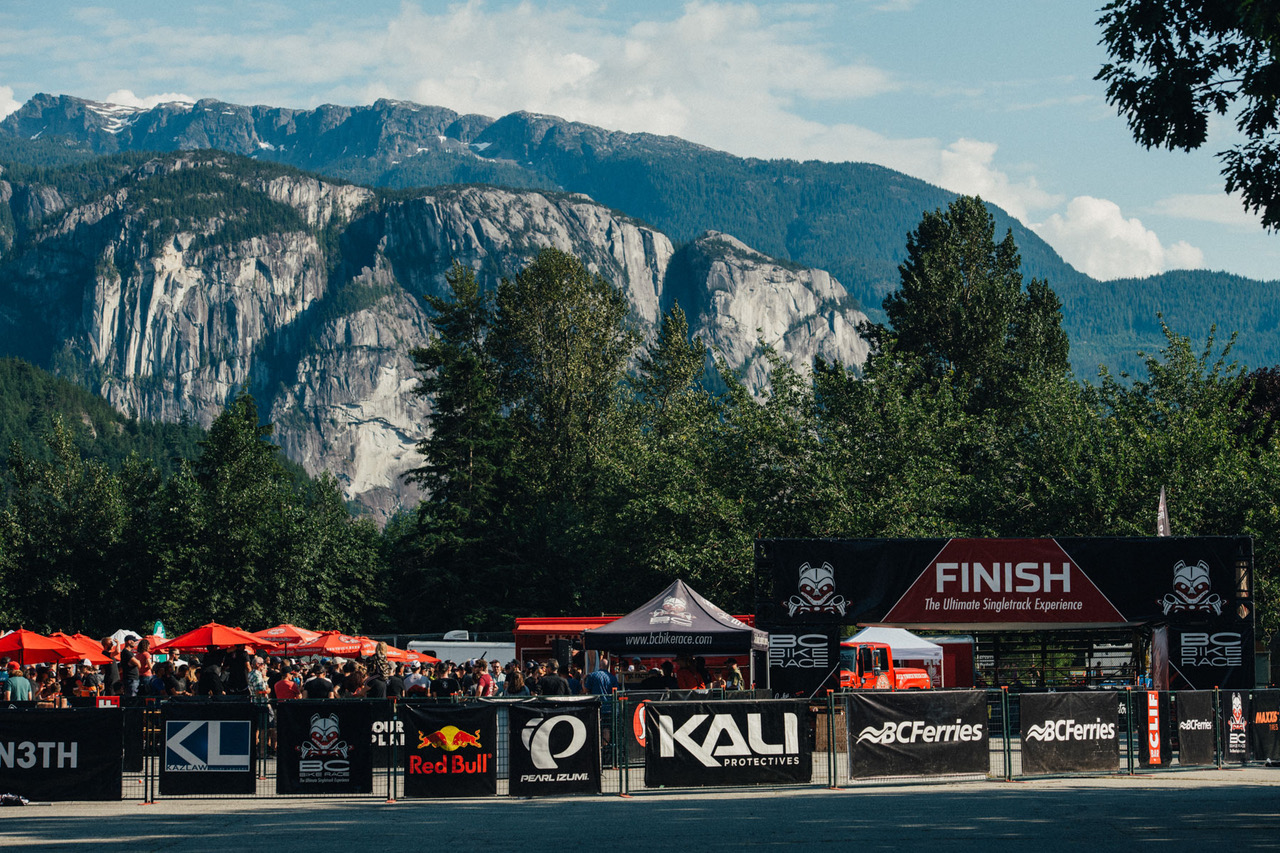 The backdrop of the race HQ in Squamish is hard to beat. Nestled halfway between Vancouver and Whistler, it’s easy to see why so many mountain bike and outdoor brands are based here. Watch out for the bears though. A couple of Aussie came face to face with a friendly trail bear towards the end of the final stage. Just strolling along the trail on the way back on through the forest. 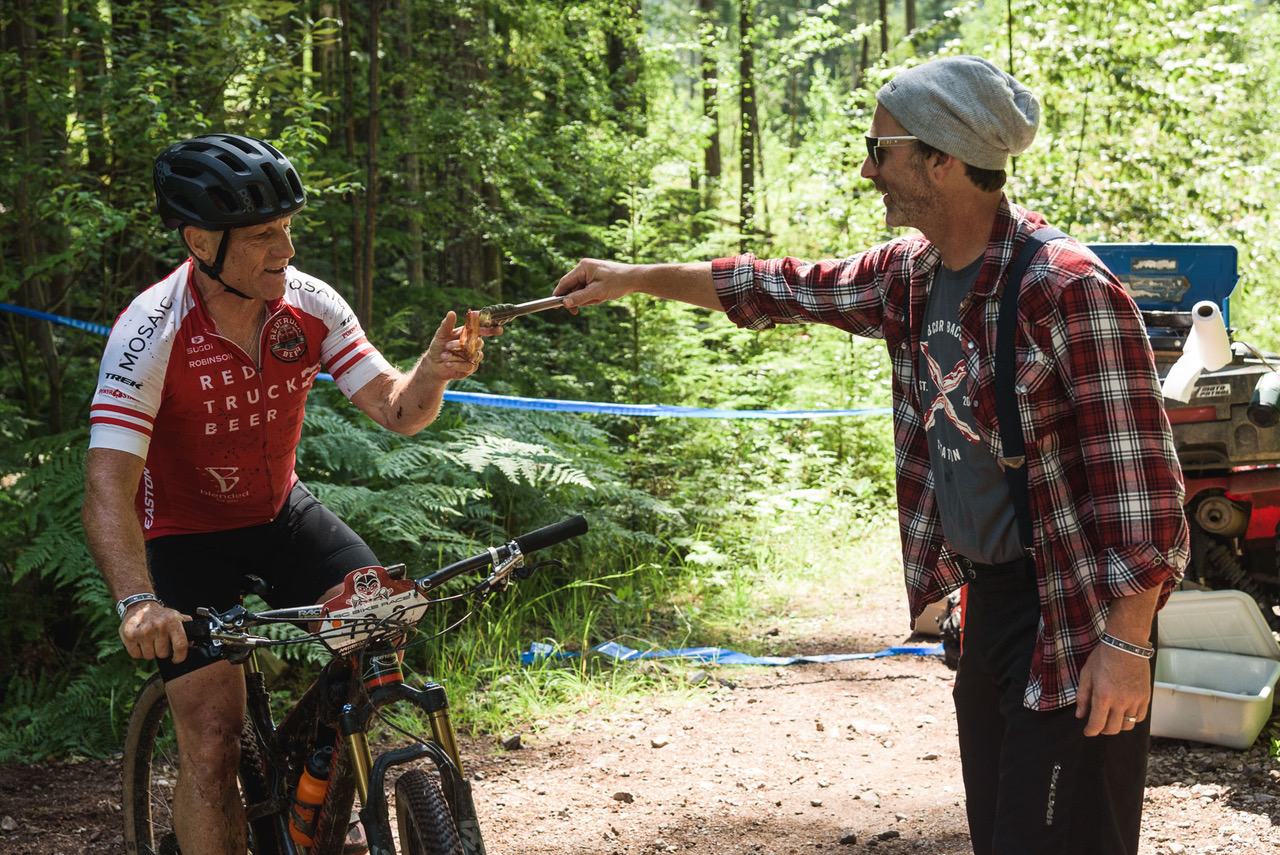 Feedzone does include maple bacon…. I got mine post-race, but you can’t visit Canada without trying out the local cuisine. Maple bacon is a must. 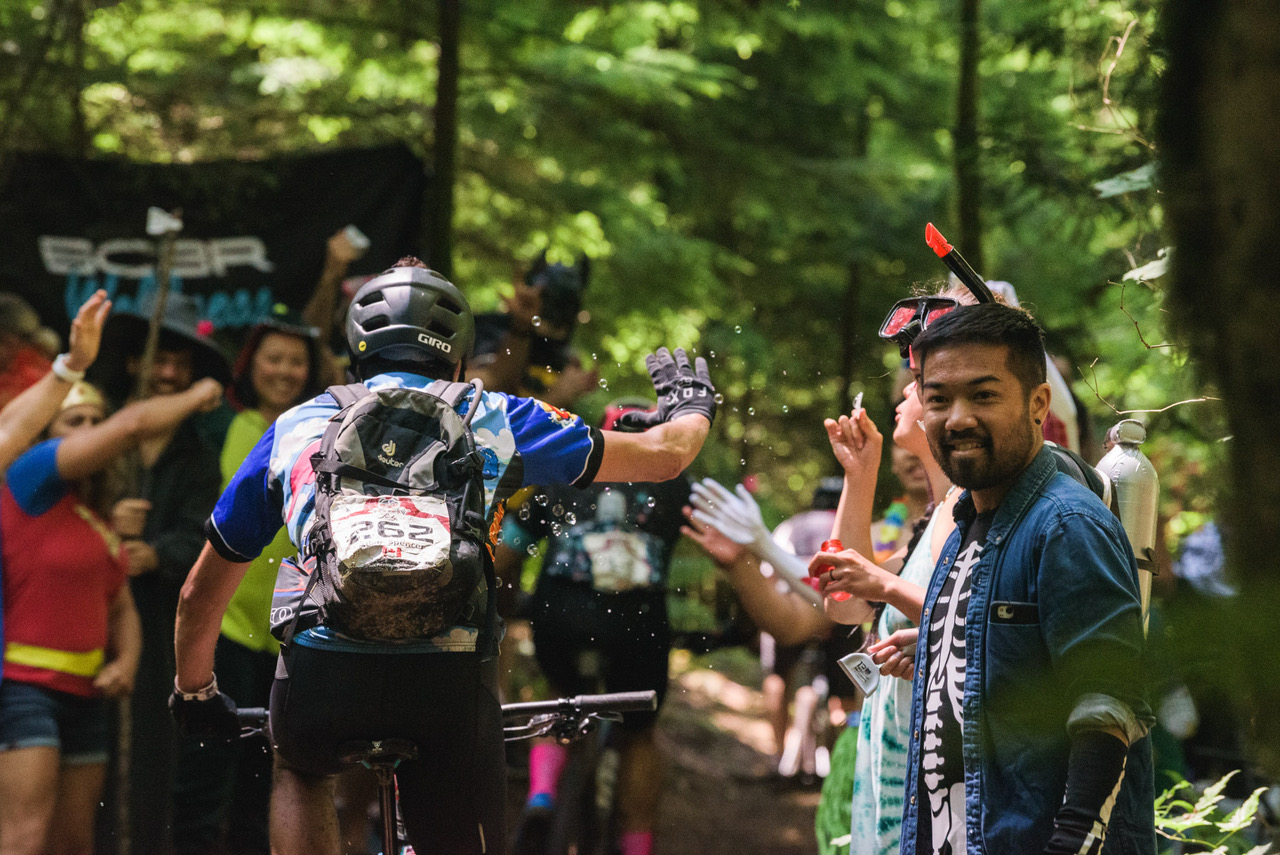 The final stage in Squamish had thousands of spectators lining the course. The local support is on a whole different level. The stoke for mountain biking is unbelievable. 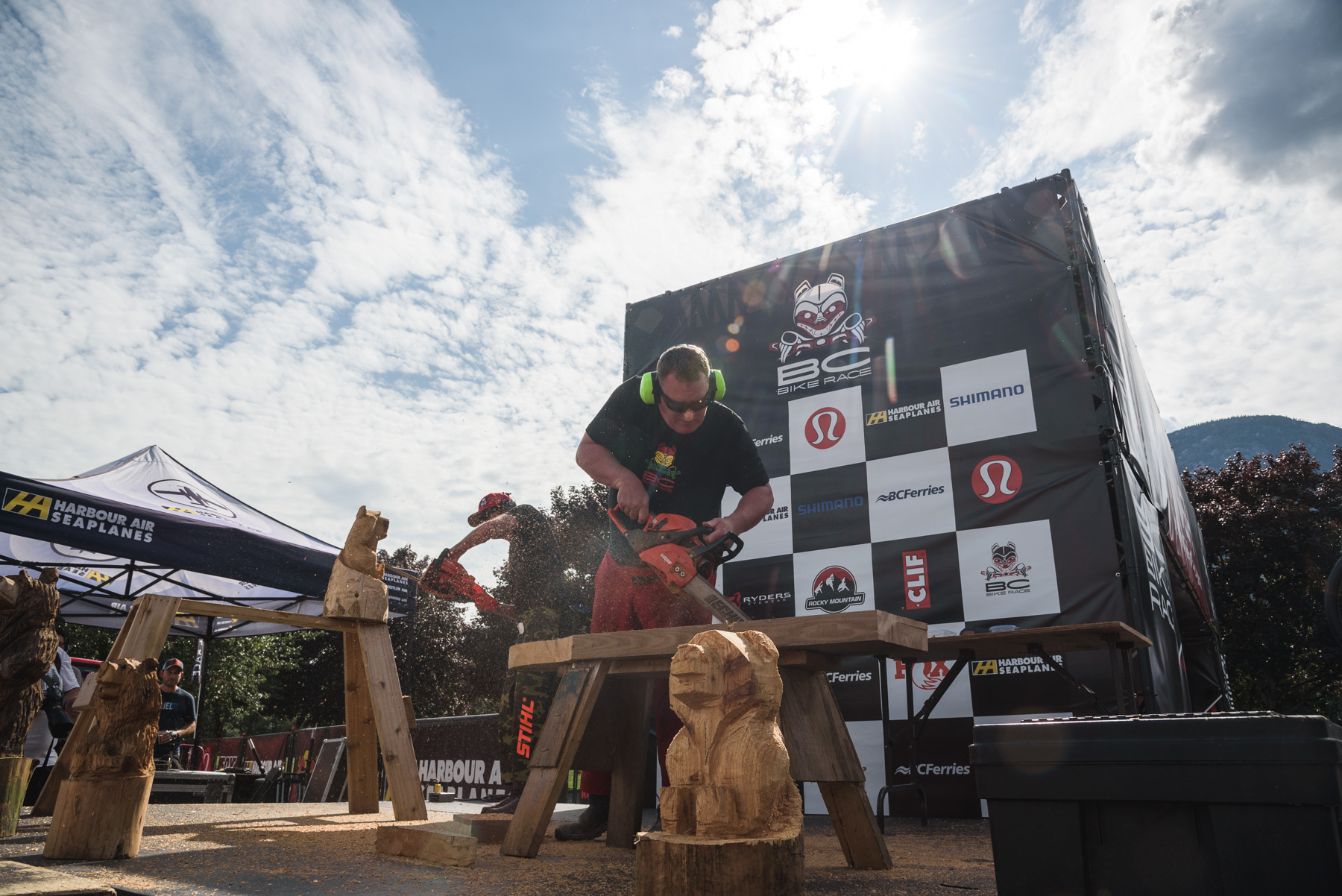 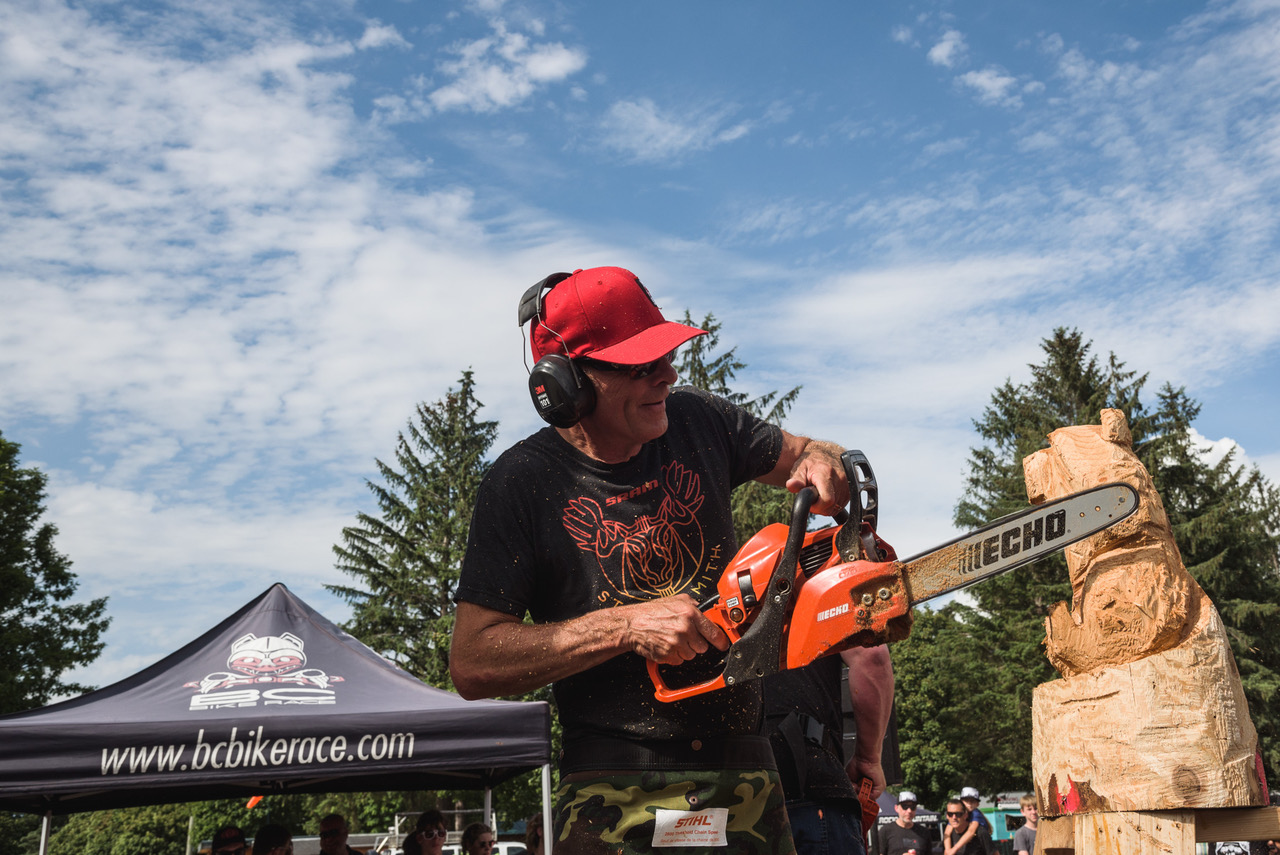 The race after-party included some Canadian icons, including a chainsaw skills competition. Not a sport I am likely to take up any time soon. 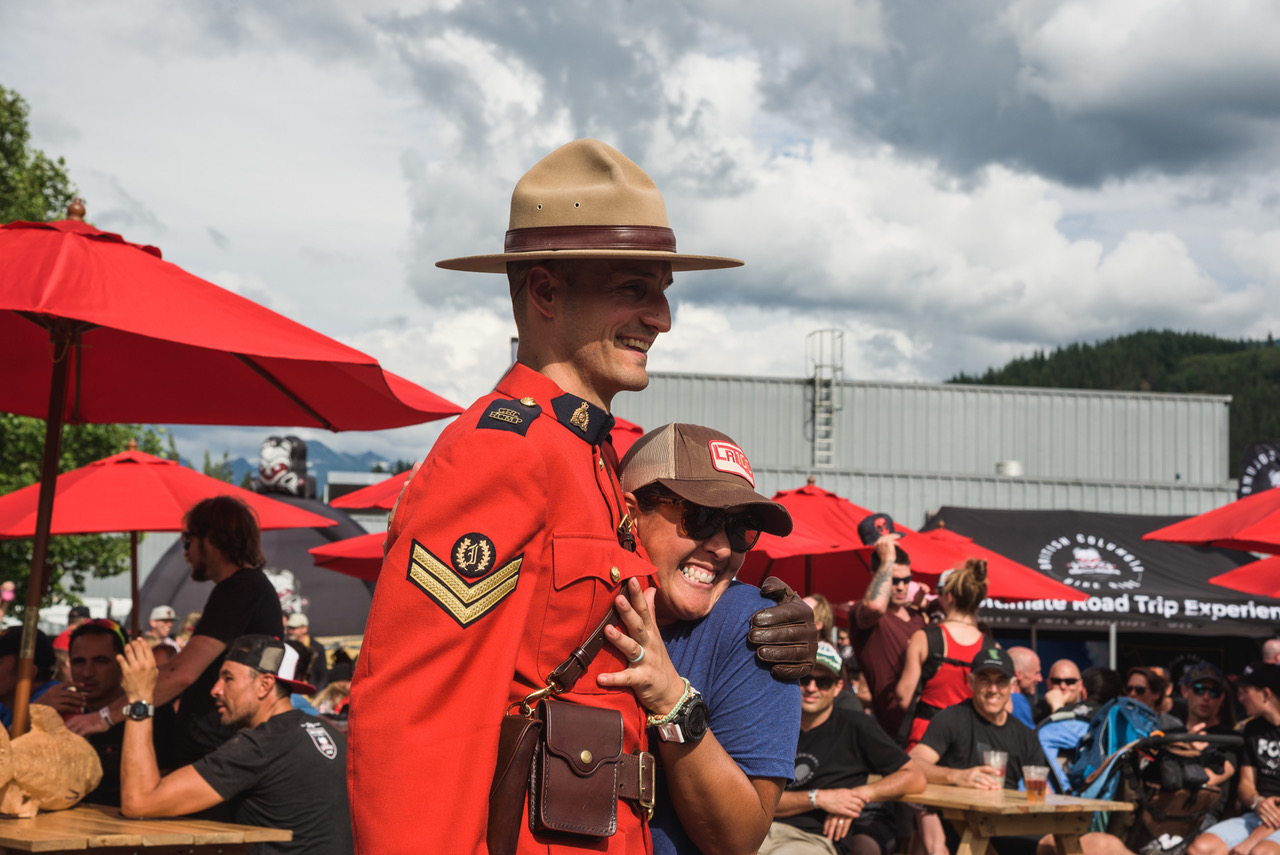 Canadian Mountie’s keeping the crowd in check post-race with all the riders indulging in a few ice creams, beers and all you can eat Tim Horton’s doughnuts. Serious calorie intake going on post-race! 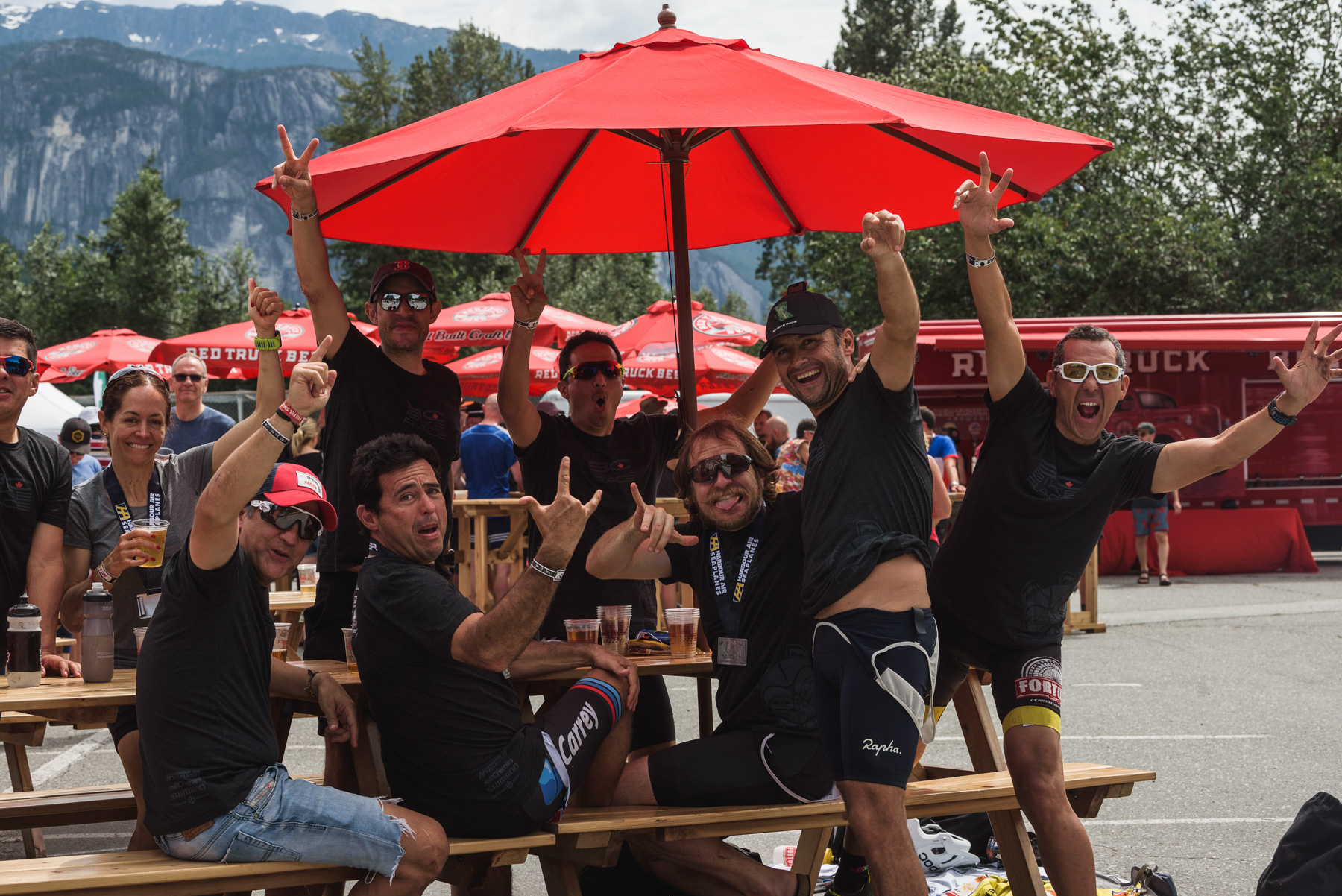 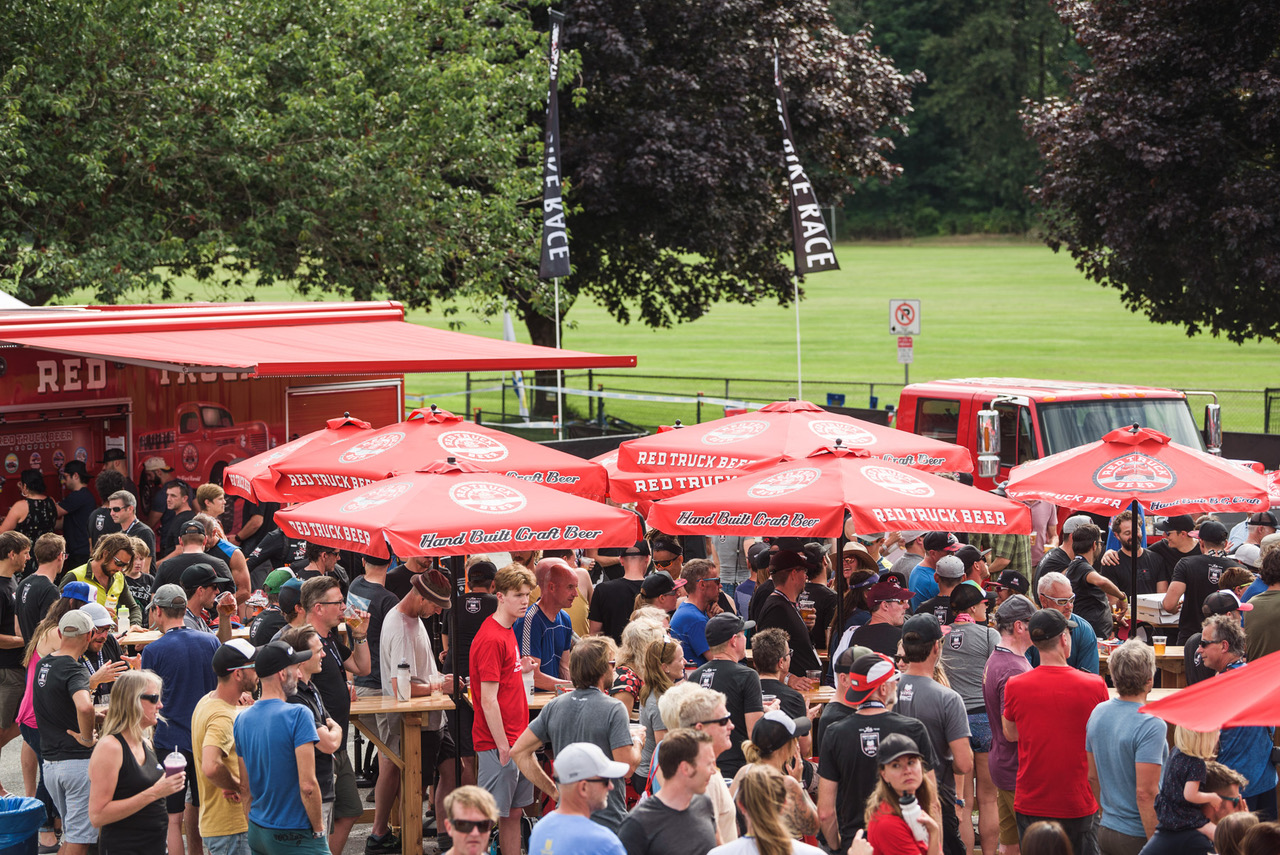 Red Truck beer getting the party started. Stats provided showed that the 2019 event had the highest beer intake of any BC bike race on record. A coincidence, with the number of Aussie’s racing? It was great to be part of such a massive event and Australian contingent. Australia and New Zealand had fourteen riders in the top 100, and of the 519 finishers, 53 were antipodeans.

See you on the start line next year?