I’m running up the stairs to our accommodation one last time. The bruises on my legs sting with every step now that the adrenaline of racing has worn off. My arms feel heavy. Suddenly my whole body is tired.

Dressed in a down jacket and shorts, I’ve just spent the evening at one of Strahan’s few restaurants. Fine dining, local wines, a west coast sunset, sharing laughter and stories with friends I’d met over the last few days.

I pause and turn to the right to take in the view of this quiet coastal town knowing I might not see it again. Images of wild, rocky, rooty, green, muddy and sandy landscapes from the last four days rush through my mind. This one contrasts in its stillness.

I reach the hotel room with enough energy to set my alarm clock one more time. ‘So this is what it’s like to finish Wildside,’ I think. My mind is empty. No worries or cares, just the calm, drowsy happiness of post-stage race bliss.

When the Pure Tasmania Wildside began in 2002, the event team, PANEA Pty Ltd, wanted to offer riders something different to the lap format endurance races that were becoming the trend at the time. Uncertain as to whether many Tasmanians would pay to ride in their own state, they designed a course that included key tourism locations as well: Cradle Mountain, Montezuma Falls, Strahan.

Race stages take in challenging sections on the dirt, while cruise stages, often on the tarmac, tie it all together. The format works a treat.

The elite riders finish most stages around or under the one hour mark. In terms of climbing, duration, intensity and pain, each race stage is akin to a lap or two of a teams 24 hour race, but the pleasure of it all is spread out over four days instead of two.

‘The stages are really short so you need heaps of power, but then you need the endurance to get through the cruise stages,’ says Chris Ryder from Sydney, a manager of remote area fire fighting with the Rural Fire Service.

‘It works well. It gives you time to chat with people and meet people while you’re riding. You normally end up linking up with the same group that’s in your start wave so that’s cool too.’

Over four days of riding, mountain bikers take in 200km of terrain. We were surprised to learn that this dramatic fragment of the world is an area many Tasmanians rarely visit, let alone most mainlanders.

The racing started high up in the moss-covered landscape of Cradle Mountain. The view was green in almost every direction. Even the trails were green as blankets of soft moss and grass had grown over them from the sides. The afternoon stage followed the rolling, rocky hills of a power line track. These stages favour those who can put power through the pedals.

Day two kicks off with some slippery, rocky climbing and a wild, wet and rooty descent. The iconic Wildside image of the long swing bridge past Montezuma Falls happens after lunch on this day.

A long section of unpredictable four wheel drive track was cut out of the afternoon route in 2014 as it was deemed unridable after a 4WD rally late last year. Instead we spent an hour or so hopping, pumping and sliding in and out of mud puddles, some that were deeper than your drive train. The unusual juxtaposition of warm weather and sloppy, downhill mud made for some of most thrilling and fun riding you can do on a bike.

A short time trial kicked off day three with riders paired up with the person next to them on the GC. A long, white gravel cruise stage took everyone to lunch at Trial Harbour, the windswept coastline a promise of things to come.

The Trial Harbour to Granville Harbour stage in the afternoon included some steep climbs and fast, rocky, rutted descents. Further back in the field the lines became more obvious making it a less daunting ride.

A fast hit out along Ocean Beach in Strahan, followed by soft sandy ups and downs is the final stage of the event. With the event team unable to solve the question of how to get from Granville Harbour to Strahan, this is the only section that doesn’t link together in the point-to-point format, but the call to still include it works well. Riders finished on the beach, bathed their legs in the ocean, and celebrations began.

The event saw reduced elite fields this year, perhaps a sign of many racers funding their own way through selection events for the Commonwealth Games or the Cairns World Cup. But this didn’t reduce the speed of the racing in the men’s and women’s fields with course records broken daily and the final placings up for grabs right up until the finish line on day four.

The overall lead swapped daily between Ben Mather and Mark Tupalski. Tasmanian, Mather’s victory was well-earned and sure to inspire younger riders in the local community.

‘Tupac’ took a wrong turn up a sand dune in the final kilometres of the race after some confused communication with a marshal. While his performance in recent months has left many people talking about wins to come, it must have been disappointing for the young Canberran to come so close to the win only to fall eight seconds short.

Mather’s fiancé, and former Australian XC Champion, Rowena Fry, took out the women’s title in a commanding display of fitness and skills. Jo Bennett powered away to some emphatic stage wins with Jenni King never far behind. These women all finished in the top 30 overall, with Fry breaking into the top 20 on the stages that were more technical. 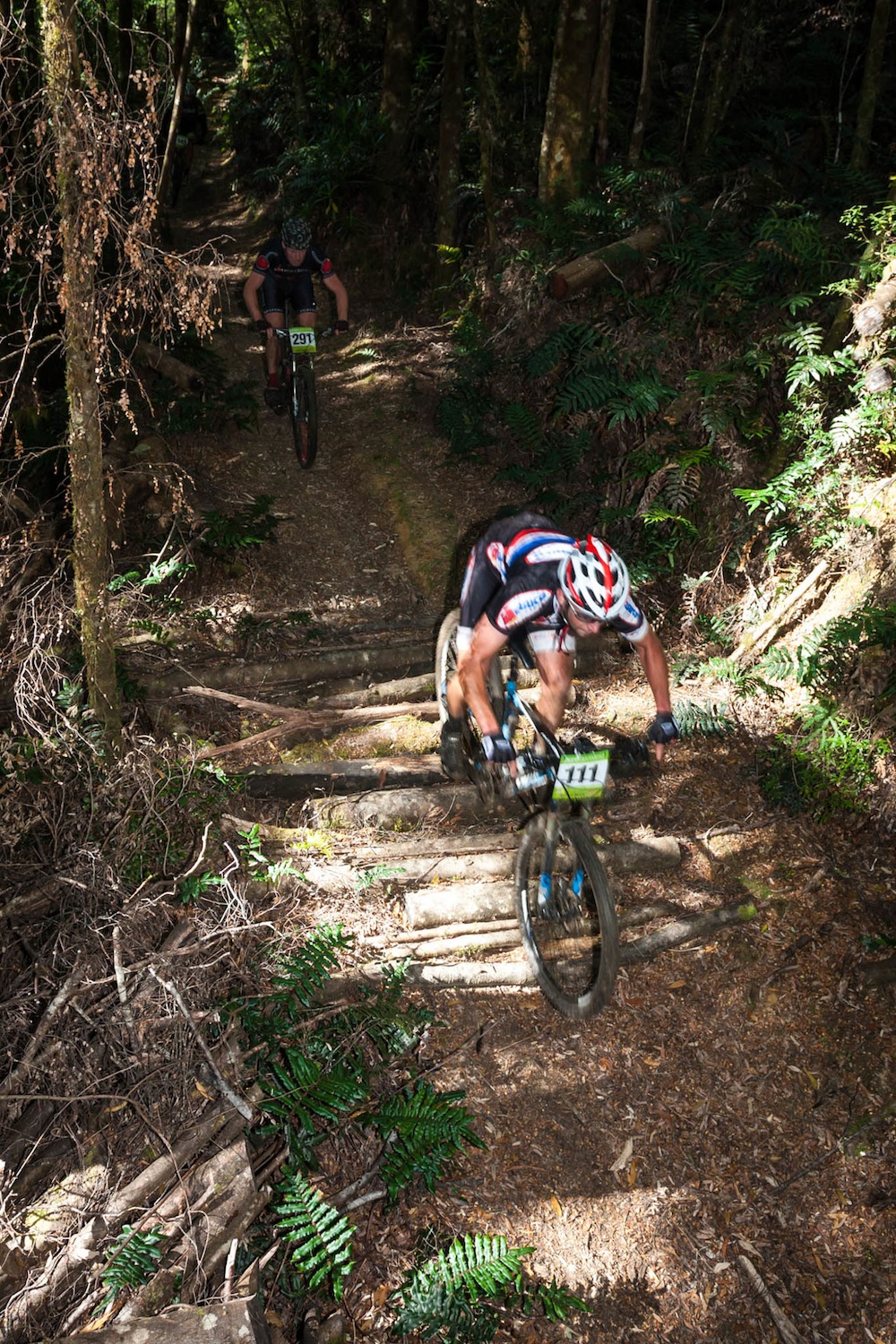 With start groups seeded on cumulative stage times, there were many races within the race, and age groupers kept each other working hard as well.

As legs got tired, camaraderie became stronger. It’s not surprising that new groups of friends form through events like this one, and like-minded mates seek out new riding experiences together in the future.

Most mountain bike events in Australia right now draw numbers by pushing the quality of the purpose built trails they traverse. The trails at Wildside are far more organic; shaped by wind, rain, (four wheel drives) and the sun. They’re often wider and far less predictable, which is precisely what makes them so fun.

As a rider you’re constantly scanning ahead, thrilled if you get the line right, and reacting quickly if you don’t. Most rougher sections can be ridden at slower speeds by less skilled riders, but they offer the chance for more technically minded riders to push the speed and up the adrenalin, especially on days two and three.

Anything that may be preferable to walk was clearly signed. And anything that can’t be safely ridden was marshalled. While the event team say they are constantly refining the way they run the event, riders agreed that they couldn’t ask for anything more.

Lunches between stages offered more than we could eat. Accommodation, transport and shuttle options take care of logistics. The course marking was clear and members of the extensive event team were everywhere you looked, working hard with positive rider experiences as their aim. In short, after 12 years experience running this event, the organisation was impeccable.

Chris points out that while some people have travelled to Tasmania and done the touristy things before, it’s the terrain that links the stages together that makes the journey so spectacular.

‘It’s a big contrast from up at Cradle Mountain on the first day in rain and sleet and the freezing cold, to the last two days at 30 degrees where you’re absolutely baking and riding along the beach.

‘It’s pretty awesome, and you couldn’t do it just going away on your own, ‘cause you wouldn’t think to go to the places where we went.’

‘To try and organise to do four days the same as this with a couple of mates, it would just be a nightmare. I think it would be even more expensive than doing it as part of a race. And you wouldn’t get the same feeling with all the different people and hanging out.’

While photos and video footage of the race blur the landscape into a mix of coast and bushland, on the bike the scenery and riding surfaces changed dramatically from one stage to the next. Experiencing these unique environments was the biggest thrill of all.

Like Chris said, it’s not a journey you can easily do on your own, or with a couple of mates. And given the ways the experience is heightened by sharing Tasmania’s West Coast with 400 or so other riders, why would you want to? I’m pretty sure I had a similar thought as I looked at Strahan that last time from the stairs. 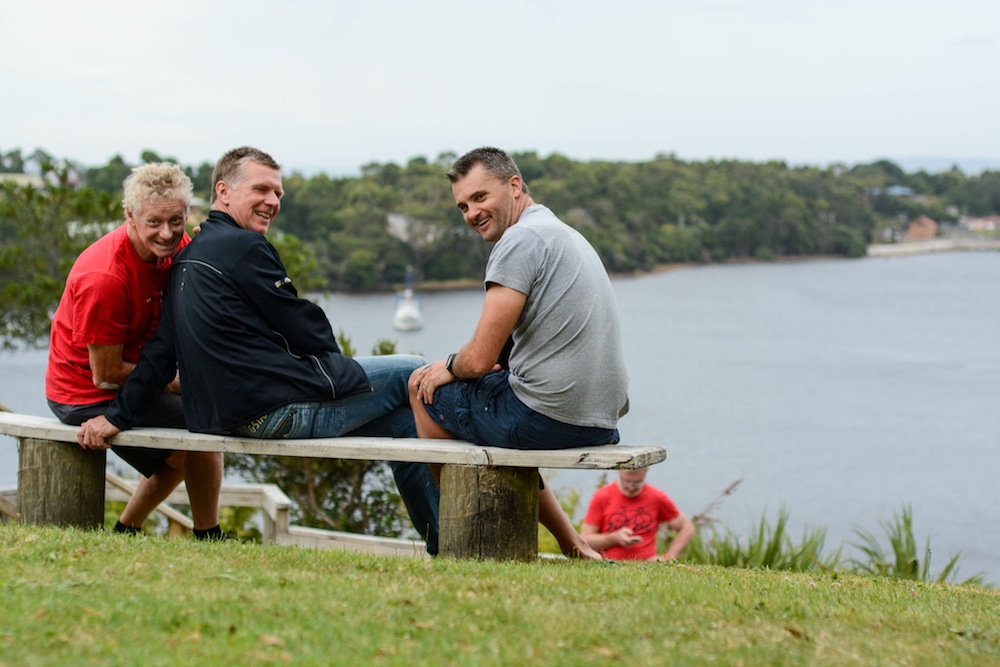 So start saving now for Wildside 2016. Punchy stages, challenging riding, excellent organisation, friendly people and somewhere you might not otherwise see. The Pure Tasmania Wildside is one for the bucket list for sure. 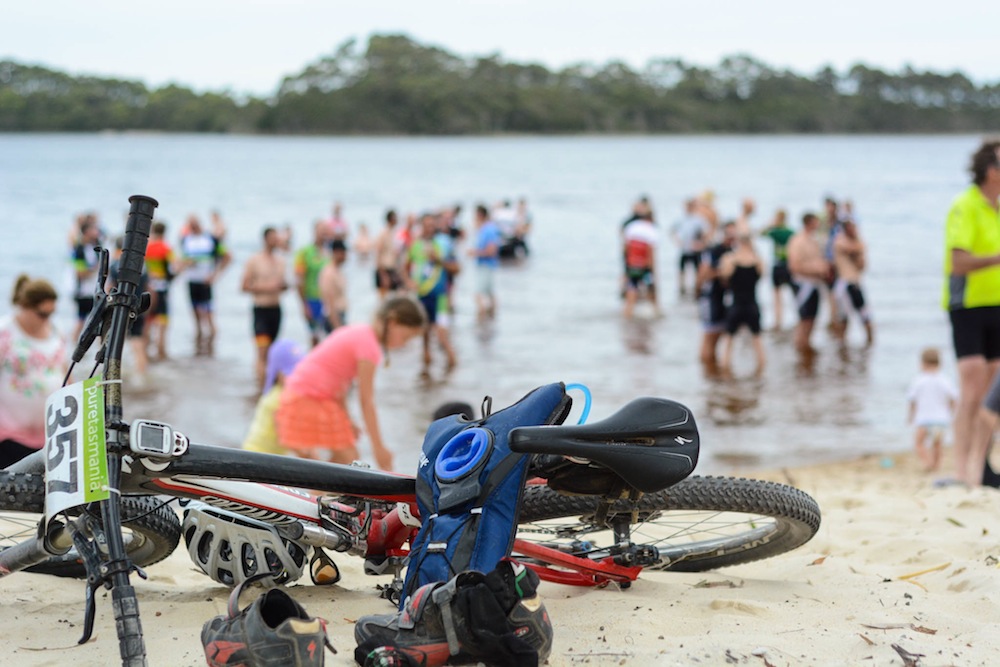