Almost a year ago, Flow's Brisbane-based Pat 'the porpoise' Campbell told us that he was going to build a rigid single speed. 'That's it', we thought, 'he's licked one too many cane toads, he's cracked.' But because we like to see Pat suffer on the bike, we encouraged him. And finally, after countless emails seeking a second, fourth or seventeenth opinion about which spokes to use, Pat's bike is rolling on the dusty trails of Brissy.

As anyone who’s ever built a project bike from scratch will know, it’s a deeply involved process, both financially and emotionally. Join Pat, as he tells the tale of his own personal journey to rigid-singlespeed-weirdoness. 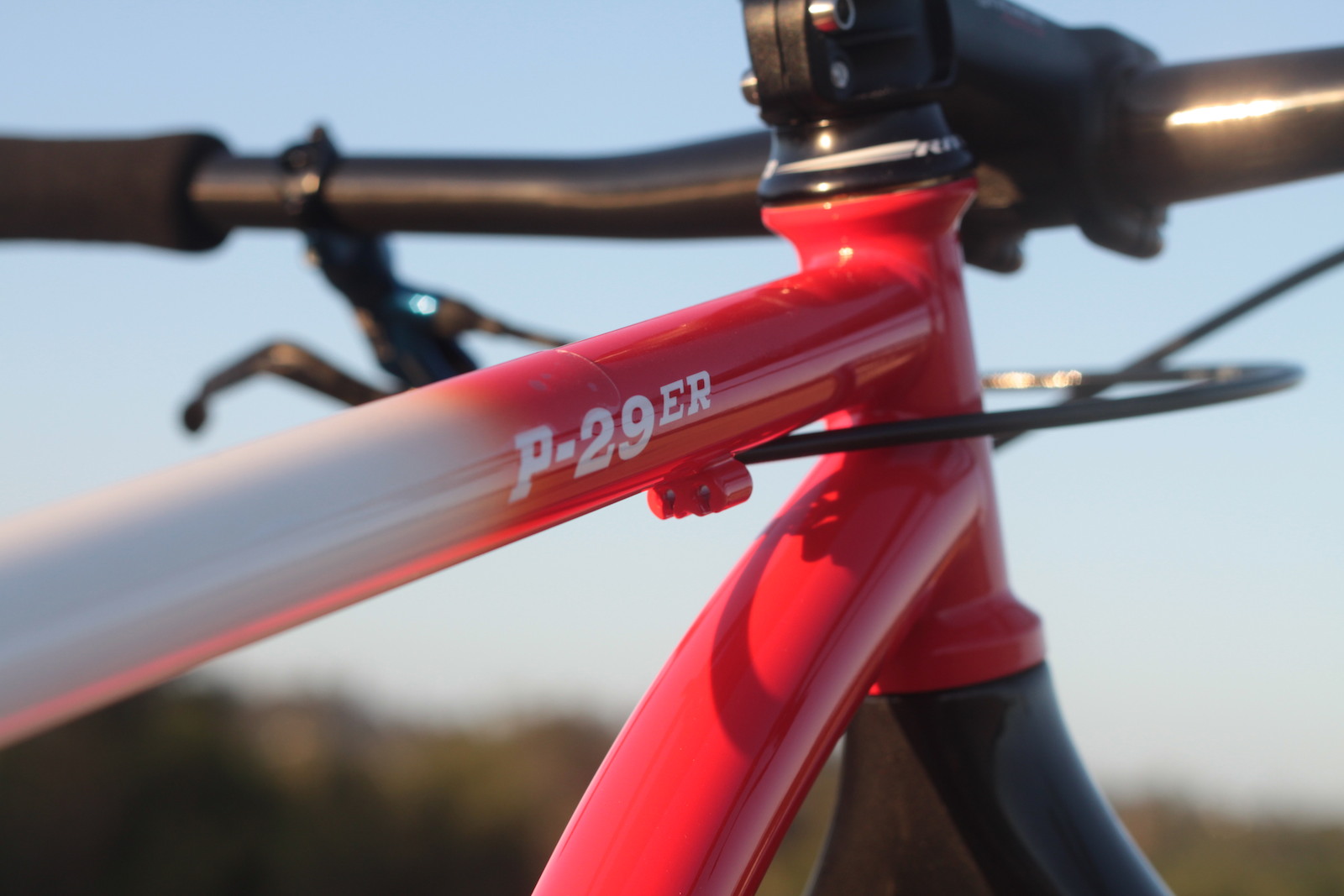 Why a single speed? Why, with all the ‘better’ options, am I going down this path? It’s something I’ve been asking myself over the past 12 months, as I mulled this project over in my head, and I think I’ve figured it out.

The first time I went down the single speed route it was onboard a ghetto mobile, it was vehicle to get me from A to B as simply as possible, with no fuss and onlt the occasional off-road adventure. It was basic in its rawest sense, an old double butted chromoly frame with a steel fork, an old rear mech locked out on the gear of choice and the bottom jockey wheel cut-off. It was shit, but it was the most reliable bike I have ever owned; rain, hail, pub crawls, uni commutes, the local trails, it was always there.

What is it that lures people to single speeds, what is the romance? 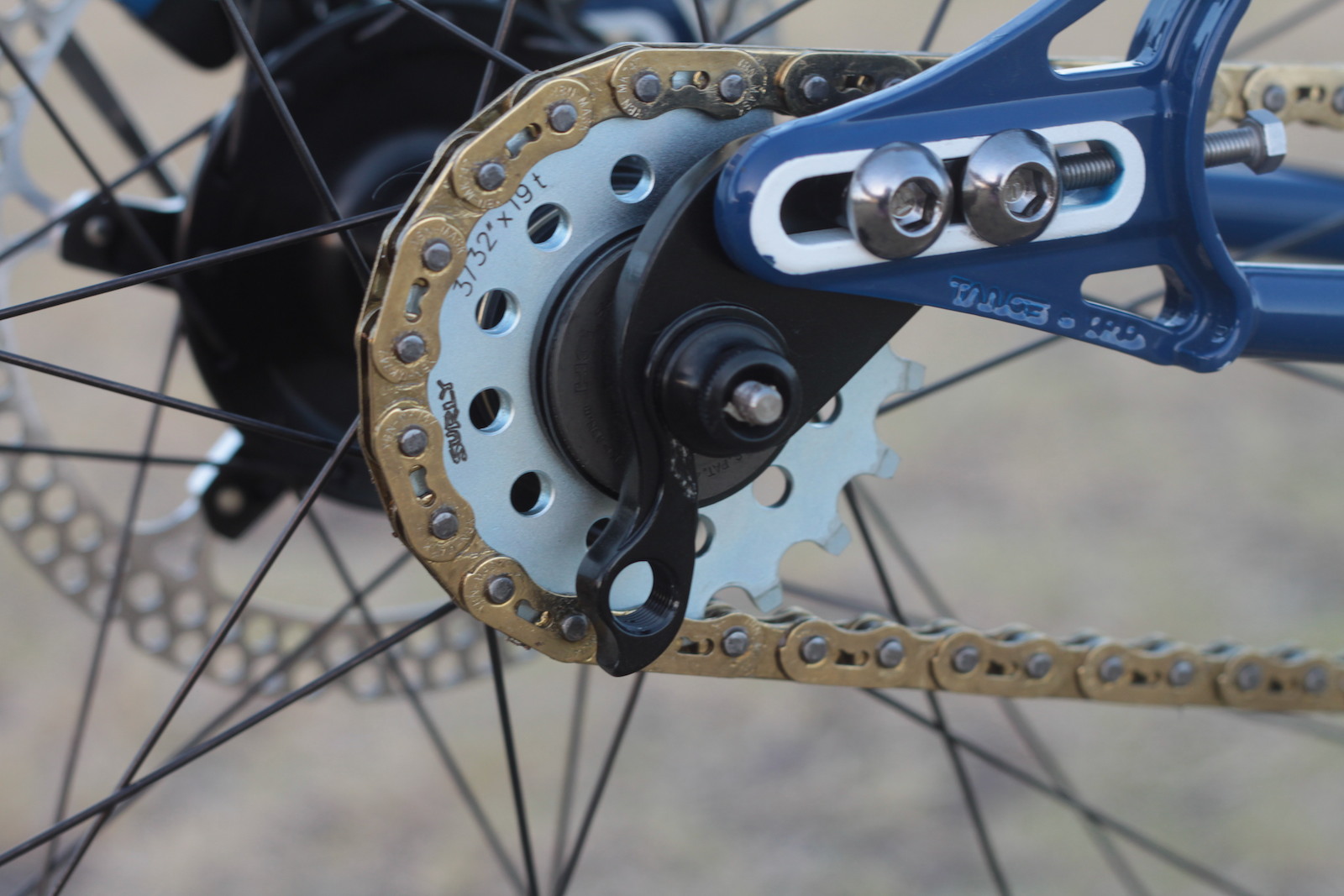 For me I look at a singlespeed and the state of mind that goes with riding it and it reminds me of why I love riding bikes…simplicity.

For most of us, the joy of riding started out on a back-pedal braked BMX doing skids on the grass or concrete till the tyre exploded. We then maybe graduated to the local walking trails or fire roads or that family friend’s place in the bush, all of it on the simplest of bikes, and we loved it. I remember bombing some local fire roads with my mate after school, he was on his BMX and I was on my rigid Malvern Star, no matter how sore our hands were we’d still turn around and do it again. That was then and I can’t imagine how many variants of mountain bikes I have had since.

It was shit, but it was the most reliable bike I have ever owned; rain, hail, pub crawls, uni commutes, the local trails, it was always there.

But recapturing that simplicity is what I’ve been searching for – that basic bike to trail connection. Don’t get me wrong, I’ve loved riding all the different variants of bikes that we’ve had over the last couple of decades, but there’s always been that missing something. And for me it’s the pure honesty of a rigid single speed, there’s no hiding. After all these years of progressing your fitness, skills and technique, it’s raw, honest riding – you and the dirt.

So after more than 12 months of searching the web and forums I finally got all the bits of bling together to make by dream single speed. There were some obstacles on the way, but that’s part of the fun. What would a custom project bike be without the odd hiccup?

Over the research period I think I went through four or five different frame options and each point in time when I was just about to commit, something would alter the course: frame supply, a tenth review of the geometry, colour, style… the list goes on.

The swapping and changing of frames had been going on so long that I had ended up with an entire build kit sitting in the living room with everything ready except the frame, fork and tyres…a strange way to build up a bike some might say. But I knew what I wanted and how the bike needed to ride and the bar, saddle, seatpost, saddle, brakes, hubs and rims had all been carefully selected. 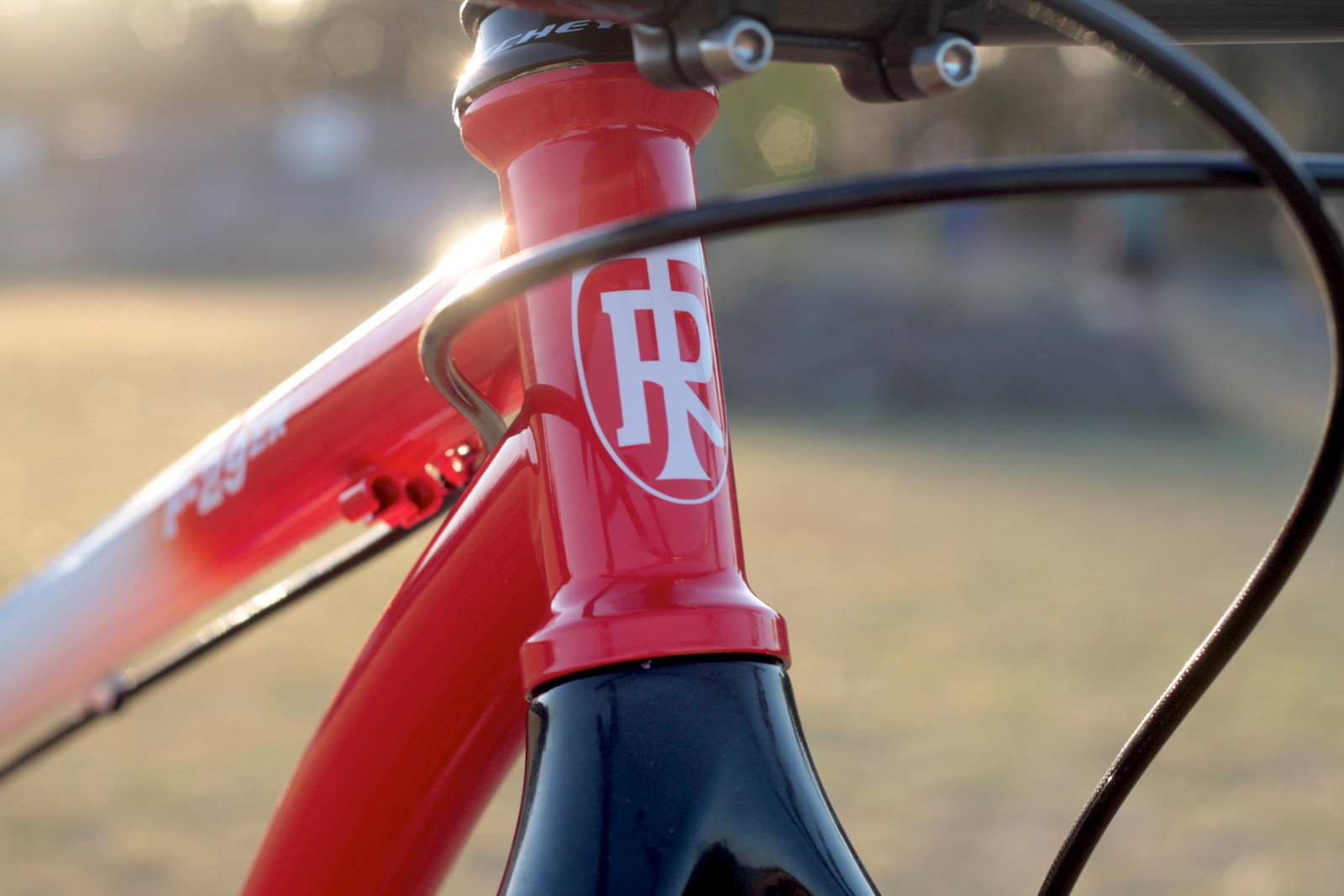 Finally the sun began to shine and there was a bright shiny light at the end of the tunnel…glowing blue, white and red and smelling of triple butted steel. Enter the Ritchey P-29er. A classic beauty of a frame, with the brains (and countless hours of saddle time) of Tom Ritchey himself behind its creation. However, with the steel and the retro P-series race colours comes a 1 1/8th steerer, which was to be the catalyst for my next challenge in this epic build. 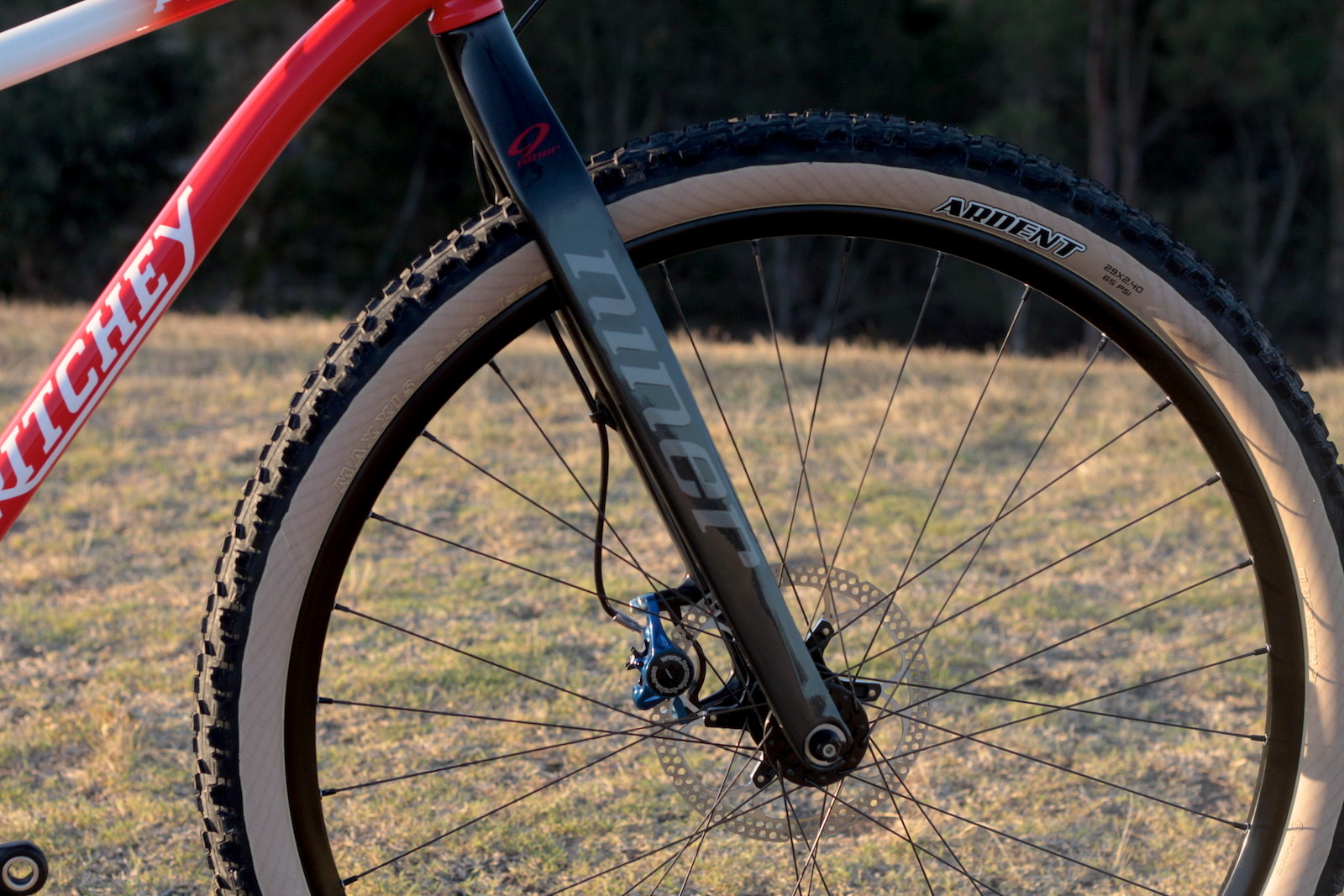 With the frame locked in and sitting with the rest of the build kit on the living room floor (patient wife), the question of a fork needed to be addressed quickly. It turns out there are not that many high performances carbon fork for a 1 1/8 steerer out there, so I ended up parting with a decent chunk of cash and soon had a beautiful Niner carbon fork in my hot hands.

All along I’d been planning for a tapered steerer and a 15mm axle, but the Niner fork in a 1 1/8th steerer comes with 9mm dropouts. Now, there was no way a standard quick release was going to adorn my front hub. Some might say, “what’s the problem? Just run a normal quick release and keep it old school”, but in that case I might as well put some centre pull brakes on this bad boy….nah some things just aren’t worth re-living. 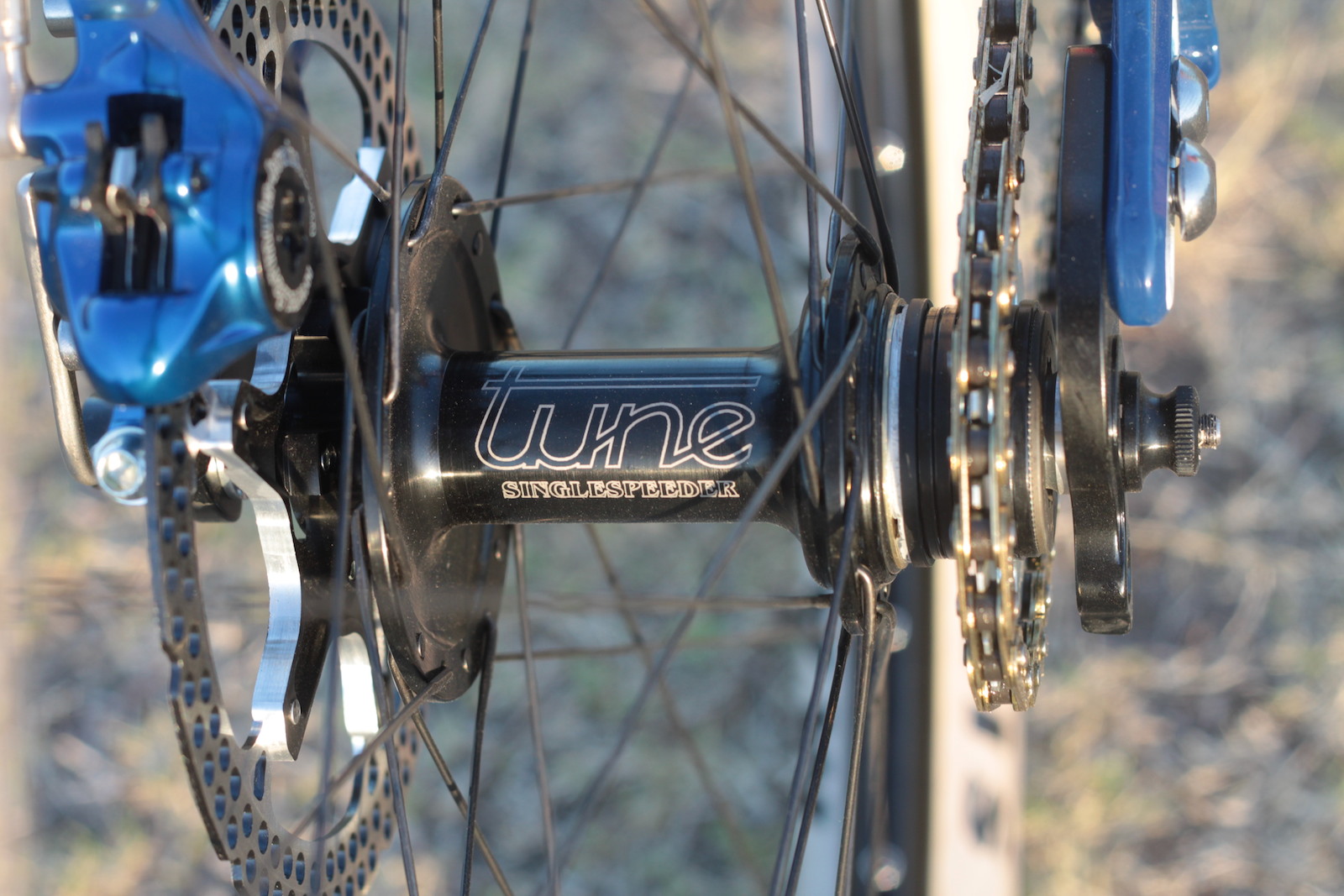 Luckily I was able to find a happy medium, FRM do a rad solid axle kit for their hubs that will fit standard 9mm/10mm drop outs. The only issue was I wasn’t running FRM hubs – I’d already bought some Tune hubs! This however was not going to stop me. I realised that all I needed to do was drill out the end caps of my Tune hub, and then the FRM solid 9mm axle would fit right through. How hard could it be to drill out an end cap? Let’s just say that if you have a mate who is a fitter and turner and can do the job in about five minutes, just hand those end caps over and let a professional handle it. I quickly munted one before I handed over the power tools! Fortunately I could get another spare.

So with one slightly modified hub cap and two beautiful drilled out caps with a 9mm axle fitted it was finally time to get all the parts together and get this build rolling…. Bugger I’d need some tyres too if I wanted any rolling to be happening. 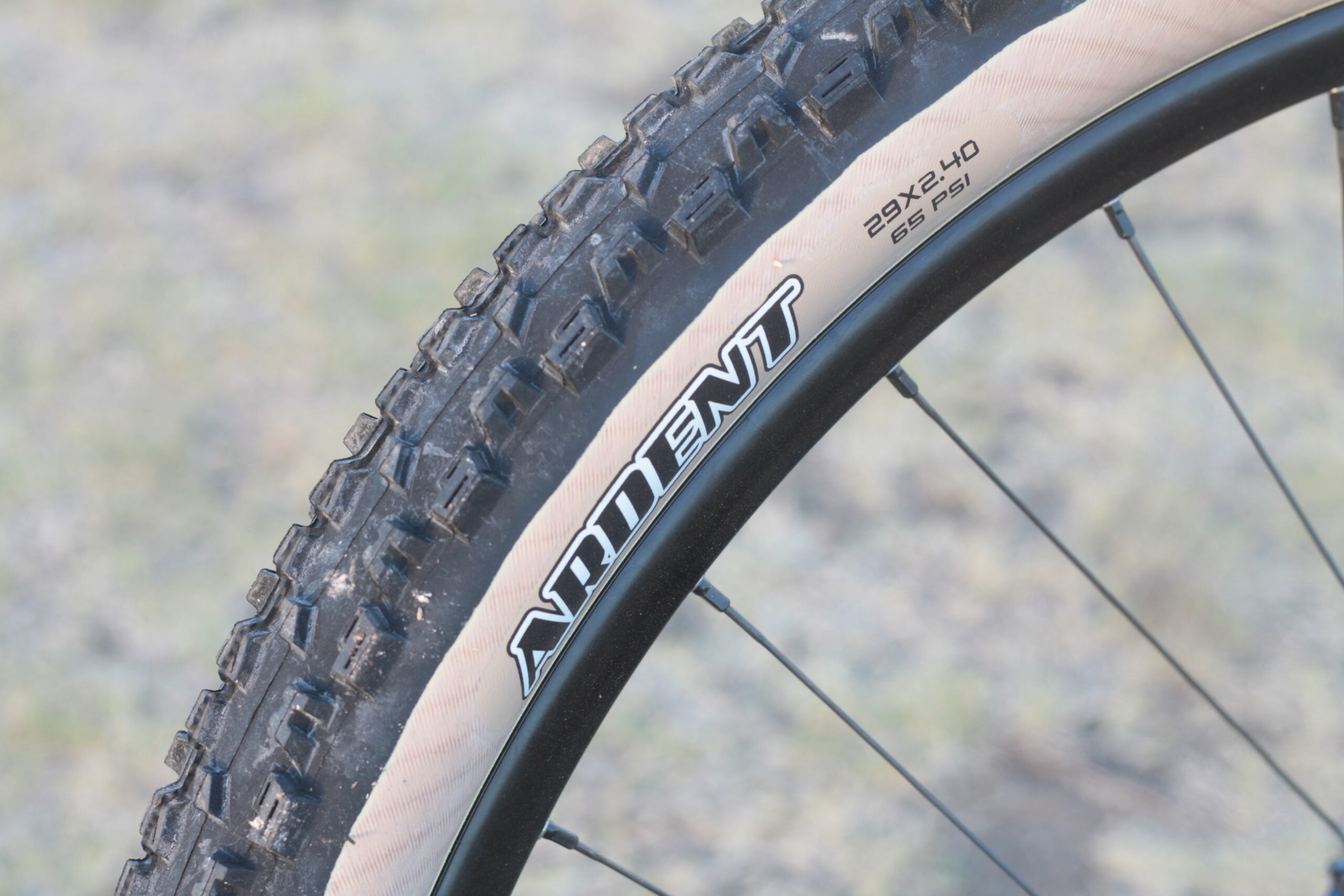 I’d been throwing around some different big-bagged tyres in my head and amongst other rigid singlespeed riders, and had a couple of good options to consider. Just when I was about to settle on some Specialized Renegades, Maxxis decided to throw some rather lovely spanners in the works: not only did they release my favourite tyre, the Ikon, in a 29×2.35 option but they also threw the Ardent in a 2.4 on the table. The real kicker was that the Ardent was available (if you knew the secret handshake and enough lines from BMX Bandits) in an awesome skin wall tyre option. I was sold! Skin wall – there was no other tyre option that would be good enough for the steed, it had to be the Ardent 2.4 with skin walls.

Finally all the ingredients had come together and the result… well, I’m totally unbiased of course, but I think it’s jaw dropping. 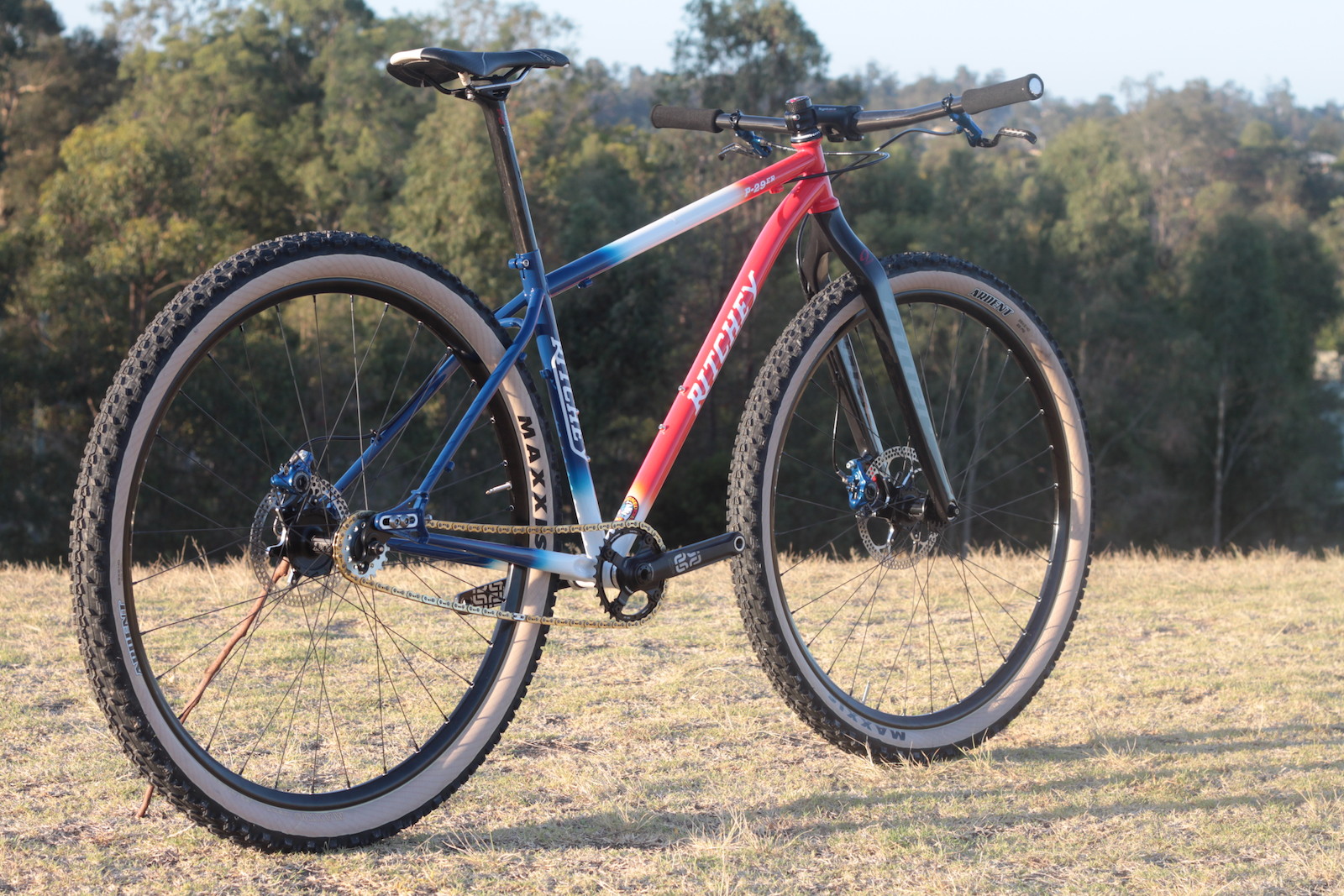 Oh and by the way it rides unbelievably well! The beautiful custom Ritchey P-29er has been well worth the wait. And with everyone running around trying to decide on whether they buy a trail bike, or an all-mountain, or enduro bike, or back country or marathon, or god knows what, it’s refreshing to just roll out on this beautiful rig and just enjoy the trails. After all, isn’t that why we ride?

As you can see from the photos the frame is breathtaking, but aesthetics alone don’t make a bike. I had been looking for some time at different frames and had come to the conclusion that steel was the preference, but I didn’t want a wagon to steer around the local trails. I wanted something that was going to be quick and not be too vastly different from the geometry of my race bike, a hard find, but I think I got pretty close. The Ritchey P29-er, was ticking all the right boxes, steel, horizontal dropouts (adjustable chainstay length), the ability to run single or geared and a sweet 70° head angle.

There was much debate and to-and-froing over the fork, but with the Ritchey frame, my choices for a carbon monocoque fork with a 1 1/8 steerer were limited. The Niner forks are tried and tested when it comes to rigid single speed setups, and when combined with its sleek lines and the just the sweep that I was looking for, the Niner fork was a must have.

I have been running Tune hubs on my race bike for some time now and have found them absolutely faultless. They are light yet superbly strong. The engagement and of the freewheel on the Singlespeeder D is fantastic and its oversized flanges give the wheel extra strength.

The FRM 9mm QR, is a great way of getting rid of some of the unwanted flex from a front axle when compared to standard QR setup, although it’s fiddly if you are not running a FRM hub.

I had been looking for a single speed specific crank set for a while, I wanted something that looked good, was stiff and didn’t weigh a tonne…enter the XCX+Single. The XCX+Single has a 30mm spindle – these are super strong cranks. 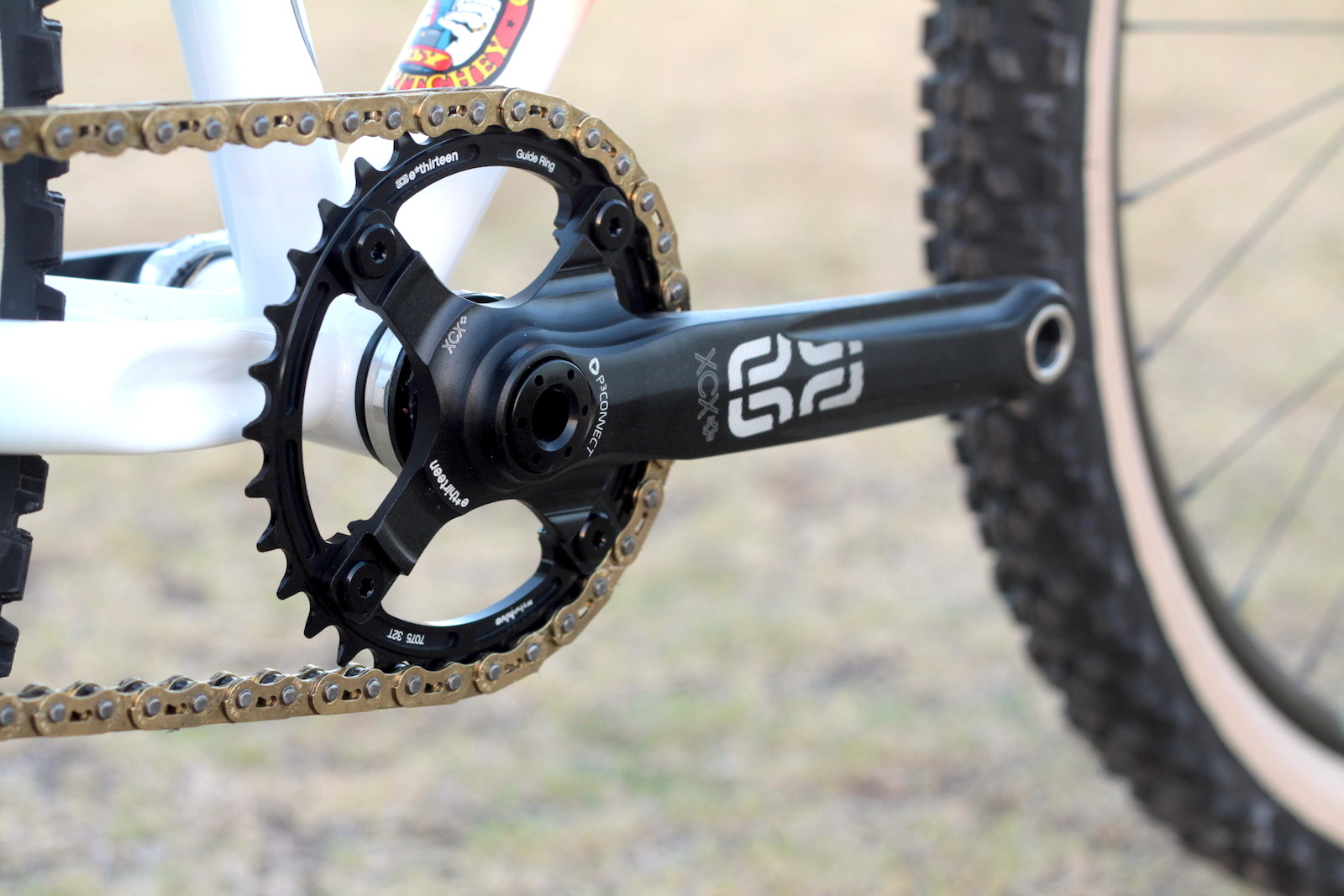 The Maxxis Ardent’s have become a favourite of late; we have had the pleasure of having them on a number of test bikes, riding numerous trail types. They roll well on our local dusty hardpack trails yet still have the aggression need to bite into a loose corner. So when I found out they were making a 2.4” with skin walls the decision was final. While the skin walls may not be tubeless specific, they do tubeless up – just make sure you have soapy water, a compressor, sealant and some patience on the ready. 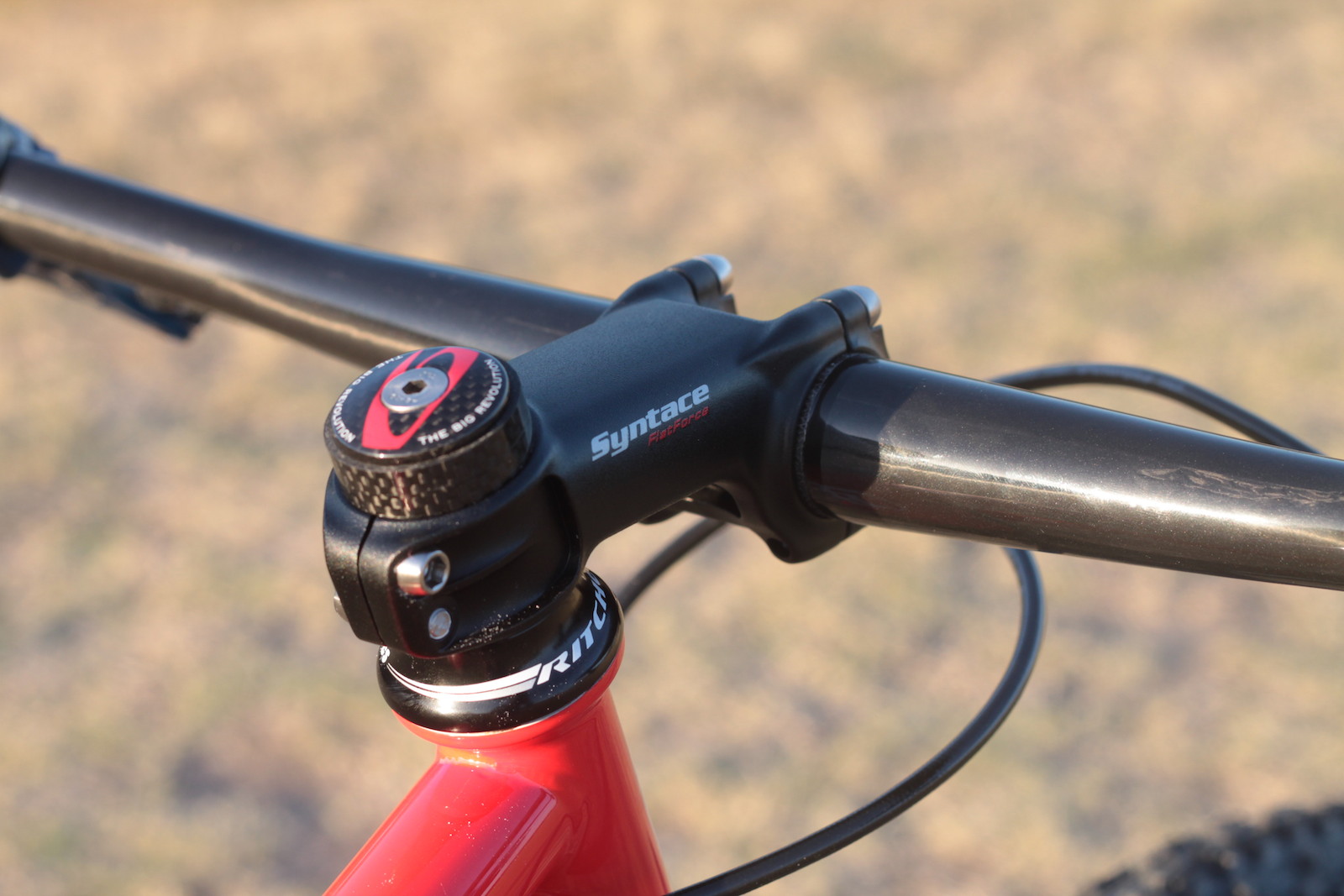 Syntace have always interested me as a brand, they avoid the mainstream approach and do things just that little bit differently. Take for example their Flat Force stem with its super low stack height and alternate mounting for the bars, below the stem’s centre line, which enables you to get those bars that little bit lower without having to run a -17° stem.

The bars are perfect for a single speed, nice and wide with a perfect sweep and offering that little bit of compliance that we all love from good carbon bars.

The compliance factor was also the reasoning for the seatpost choice as well. Syntace has developed this post specifically to gain as much flex out of it as possible without compromising its strength.

A favourite of recent times with Flow, this saddle keeps you comfortable. While it may not be a featherweight, it’s definitely no anvil.

As someone who lost their gloves some time ago, I’m always searching for a descent set of grips and these foam bad boys are mighty nice on the hands, especially when you’ve got no suspension.