Troy Brosnan (SA) has claimed his fourth consecutive Elite Men’s Downhill title with a nail-biting win on the final day of the 2016 Subaru Australian Championships at Bright, Victoria on Sunday.

It was an anxious wait for the third ranked rider in the world as Connor Fearon (SA) had the opportunity to knock his mate off top spot, but couldn’t better Brosnan’s 3:45:46 to again take silver behind his fellow South Australian, with Josh Button (NSW) in third.

“Its been such tough battle between Connor and I, we’re really good friends and I thought he might’ve had this one this year,” Brosnan said.

“It was hard to get down in one piece to be honest.”

Plenty of talk surrounded the big time battle between Brosnan and five time World Champion Sam Hill (WA), but it was Fearon who threw himself into the mix with the fastest seeding run to ensure he’d be last down the hill for the final.

With sister Tracey having claimed the Elite Women only moments before, Mick Hannah, was keen to add to his national title haul of four, the last won back in 2013. The Cairns kid would finish fifth.

As hundreds lined the course to get a chance to see Hill in action, the West Aussie wonder couldn’t produce, with a time of 4:01:79 seeing him finish 8th.

Button, who last finished on the podium back in 2009, produced a sensational run of 3:51:59 to tighten the screws on the last two on the course in Brosnan and Fearon.

And despite only getting back on his downhill bike for the first time since he crashed and dislocated his shoulder in Thredbo earlier in the week, the 22 year old was dialled in. 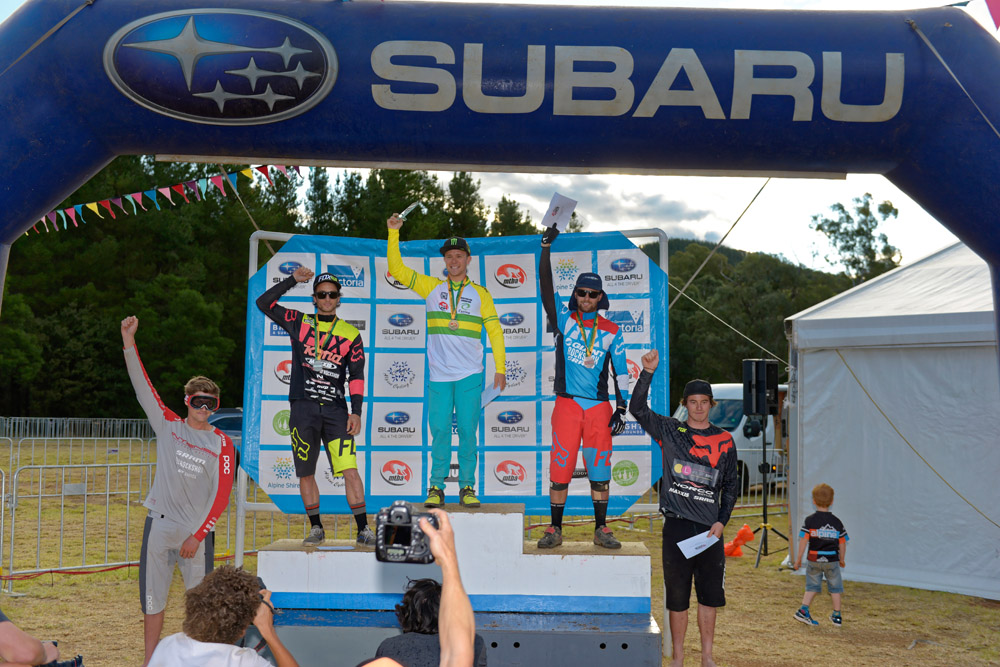 “I was coming to ride for fun but felt good this weekend and thought I’d give it a crack and put it all in the back of my head of what’s happened before this race and it all worked out.”

For Fearon, it’s the third straight year he’s been out-classed by Brosnan to the Australian jersey.

“It always seems Troy is one step ahead, but still trying to catch him and hope to beat him one day.”