The men completed seven, and the women six, laps of a five-kilometre course of the Cathkin Braes Country Park, with thousands of fans flocking to watch races, despite dark clouds, periodic rain and blustery winds. The riders had to negotiate a tricky course that featured the Brig O’Doom, Broken Biscuits, and Clyde Climbs— all named by local schoolchildren.

In a nail-biting climax to a sensational men’s race, McConnell, 28, was out-kicked in the dying few hundred metres by the New Zealand pair of Anton Cooper and Samuel Gaze.

“Obviously I’m happy to walk away with a bronze medal, it wasn’t quite the colour I was after but I was just out-matched today by the Kiwi boys who rode really smart and tactical and I didn’t quite have the power to go with them,” McConnell said.

Earlier in the 35km battle which featured 33 riders from 18 nations, McConnell was forced to bridge a small gap created by a small group of leading riders a lap and a half into the seven-lap race.  For much of the remaining five laps, McConnell went toe-to-toe with the lead group of four which included the Kiwi duo and Canadian Max Plaxton. The quartet became three inside the final lap, with the teenage Cooper attacking Gaze and McConnell with just 500 hundred metres remaining.

McConnell had no answer, with Copper crossing the line in a time of 1hour 38:26secs, three seconds ahead of Gaze with McConnell a further seven seconds back.

“It was a hard race, a fast course and I put all my eggs in that basket and it didn’t quite pan out, but I walk away with bronze so it’s not too bad,” McConnell said. “I had to put in a pretty big effort to bridge the gap, but I was still feeling pretty good and that was only the first lap-and-a-half. “It was a build up over the day, I really tried in the middle part of the race to break it up, but (with) the speed of the course there’s a lot of drafting and I couldn’t use where I’m strongest on the climbs to get the gap.

“(But) There’s not really an excuse today I just didn’t quite have the legs to go with them at the end,” added McConnell.

In other great results for Australia, Newcastle’s Cam Ivory finished in eighth, and Canberra’s Andy Blair in twelfth to finish a great day for Australian mountain biking.

Similarly to the men’s race, an Australian was faced with a battle against team mates, with Canberra’s Henderson, 22, outgunned by the Canadian duo of Catherine Pendrel and Emily Batty. 21 riders from eleven countries set out on the women’s race, with Pendrel, the 2011 world champion quickly establishing a lead of half a minute by the end of the first of six laps.

Together, Henderson and her Trek-Factory teammate Batty worked hard to pursue Pendrel but were unable reel her in. Pendrel cruised to cross in 1hr 39:29secs, just over a minuted ahead of Emily Batty who got over Henderson by twelve seconds.

“I’m so excited, this is my first Commonwealth Games and first medal and it’s such a privilege to be here and an amazing experience and I’m so happy, “ said Henderson who equalled Australia’s only medal in the Commonwealth Games mountain bike prior to day – Mary Grigson’s bronze at the 2002 event in Manchester. 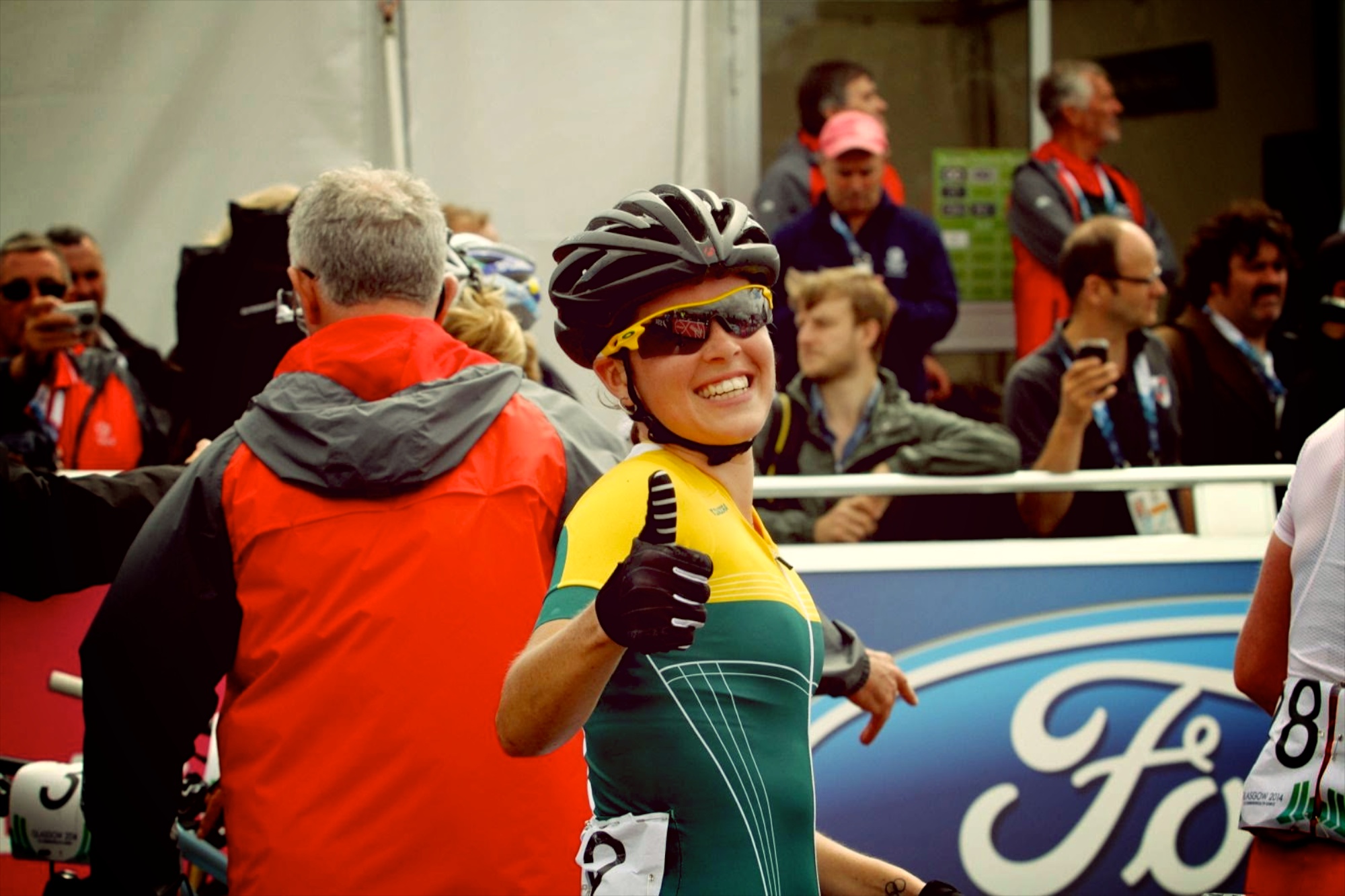 “Catharine took off at the start and I was going to go with her and I thought ‘I don’t want to get caught in no man’s land’ but I kind of did,” she explained.  “But I backed off and Emily caught up and we started working together to try to catch her.

“In the last two laps it was definitely on and I was there to defend the third place, I wasn’t going to let that go.”