Riders from 17 countries started this 23rd edition of the world’s oldest and most legendary mountain bike stage race in Cairns on 16th September and then made their way through the Atherton Tablelands to the tropical Skybury Coffee Plantation. Wetherby Cattle Station was the stage finish for two stages, before the final race finish in Port Douglas. Overall, the Crocodile Trophy 2017 finishers completed more than 660km and climbed over 10,000 meters of elevation in eight days. 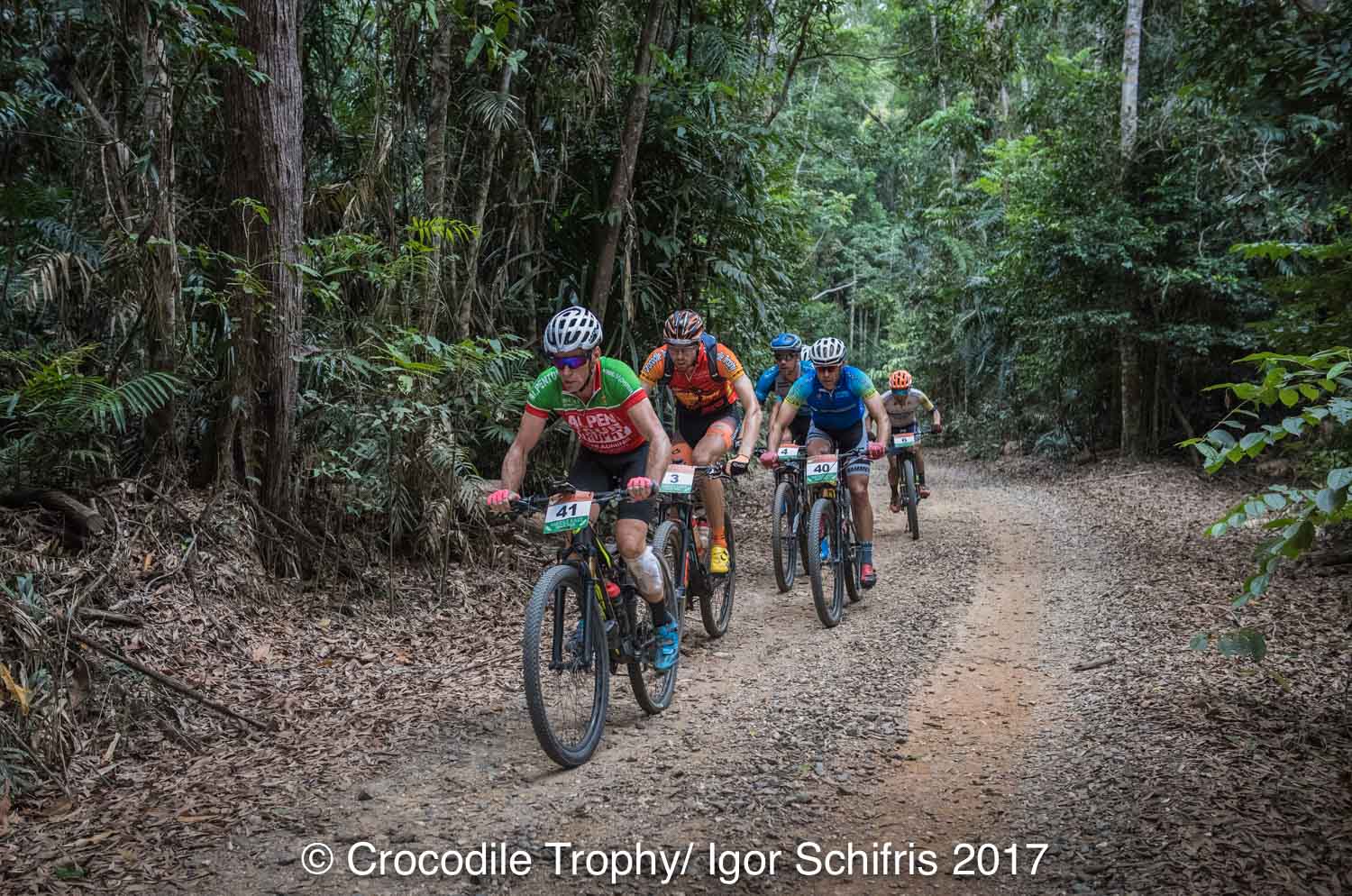 Leading the race from day one: Leandre Bouchard

The 2017 MEPT – Crocodile Trophy Champion Leandre Bouchard took the first stage win at Smithfield MTB Park on day one and defended the 1:30min lead ahead of fellow Canadian Andrew L’Esperance for the next seven days. Only on the last stage into Port Douglas was L’Esperance able to make up 15 seconds on the 30km time trial stage.

“I’m really happy that I was able to take most of my lead across the finish line”, said a relieved Leandre Bouchard in Port Douglas after a total 27h15:59.5 of intense racing behind him. He admitted that he hadn’t expected the steep climbs of the early stages and that he was so positively surprised by the positive atmosphere among riders in the Croc camp. He also said that the race had been more challenging than he had expected, “This is definitely a race for a tough person.” Of the final race days he said, “Andrew [L’Esperance] got really strong over the last few days and I really wanted to claim today’s stage myself, but am content with the overall victory, of course”, he said. He added that he loved racing in the so unique Outback and had been so impressed with the event and the organisation behind it, “It’s been a real adventure and I really enjoyed this week.”

Andrew L’Esperance said that he didn’t “didn’t really spend a whole lot of time thinking about the Croc beforehand”, as he had been so focused on the World Championships the weekend before in Cairns. “I went in without much expectations other than just knowing I was going to get to explore a pretty amazing part of Australia on my bike. That being said, it was everything that I wanted, even if I didn’t know I wanted it.”, he admitted and added that the thing that surprised him most was how challenging some of the stages were. 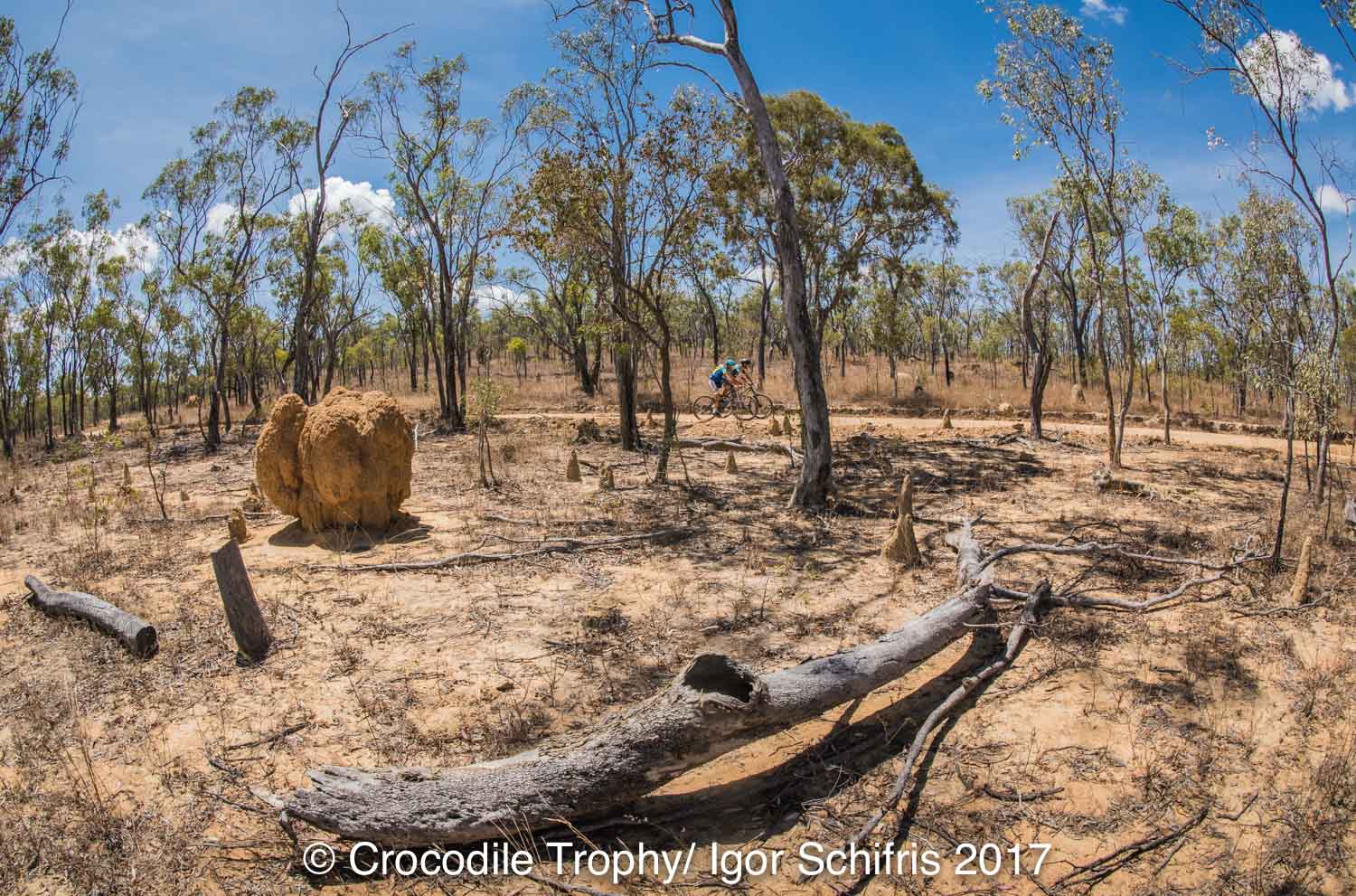 “At the front of the race it was tough and we were out there for the least amount of time. The athletes that were out racing their bike for hours longer than us each day were very impressive. Anyone who finished stage 3 is an animal, that was a tough one,” L’Esperance recounted of the race.

Crocodile Trophy still has a bite

Stage three was said to be the hardest stage this year by most finishers. The fourth-longest stage offered the most meters of climbing in one day this year and took its toll on the racing field. Haley Smith the only Elite Woman racing in this year’s event was impressed with her fellow riders, “[…] I was also surprised by how tough the other athletes were. A lot of the athletes that complete the event are not full-time athletes, and I found it so inspiring to see them just crushing it every day. Those were some very long days in the jungle, and I was just so impressed with the perseverance and drive of all the athletes.”

Smith is a short-course cross-country expert and had never raced a marathon before the MEPT – Crocodile Trophy, which was also her first ever mountain bike stage race. “I think, overall, I had a lot more fun off the bike than I expected to. The people participating were awesome, and I really enjoyed getting to know people at the race. This was something very different from my typical XCO style of racing. At our races, we don’t often spend any leisure time with our competitors, so it was very special to have that social environment and really feel the camaraderie. I also think I maybe underestimated how hard the terrain would be. The 4th day of racing was quantifiably the hardest day I have ever had on a bike – and that’s saying something!” 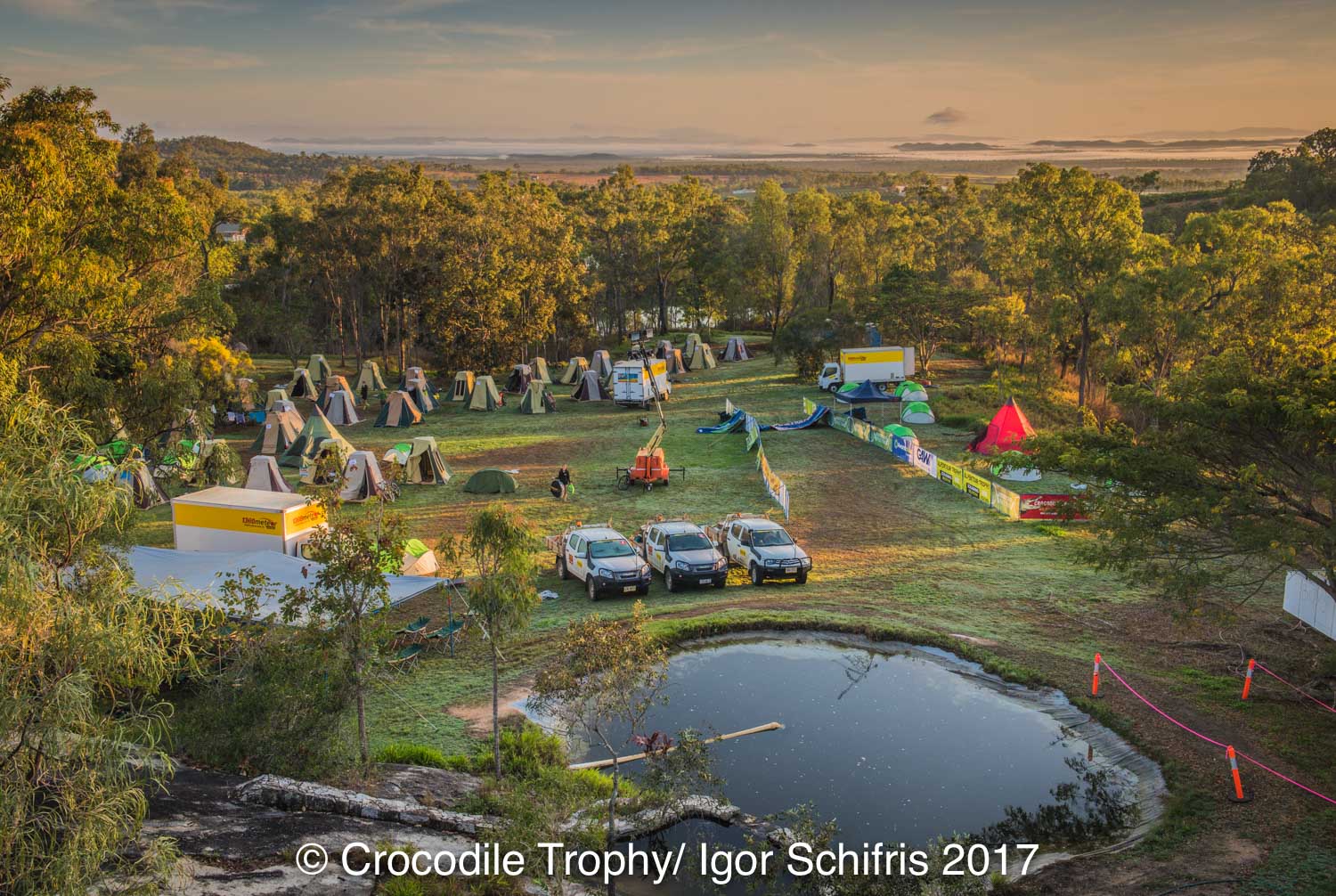 Stage four was the 122km race from Tepon Equestrian Park near Herberton on the Atherton Tablelands to the Skybury Coffee Plantation. On the day Smith had said that without other female racers in the elite category, she was chasing the men, “I just like racing people, doesn’t really matter who.” With a 14th place outright in the entire field, in the end, Smith really made her mark on this year’s race result, finishing the eight stages in 32h13:29.7.

With a stage win on day five the ex-road pro and four-time Tour de France stage winner Erik Dekker from the Netherlands took out the third place overall and the Amateur race title at this year’s event. A stage win had been a real goal at the MEPT – Crocodile Trophy, Dekker said, who had established a strong third position behind the two elite leaders Bouchard and L’Esperance early in the race.

Dekker had retired from professional road racing in 2006 and says the two scenes are very different. The Crocodile Trophy especially is a completely new experience. “Well, I’m here on my own, I had a flat tyre yesterday and normally I’d get a new wheel. Here I had to fix it myself”, he said laughing out loud. 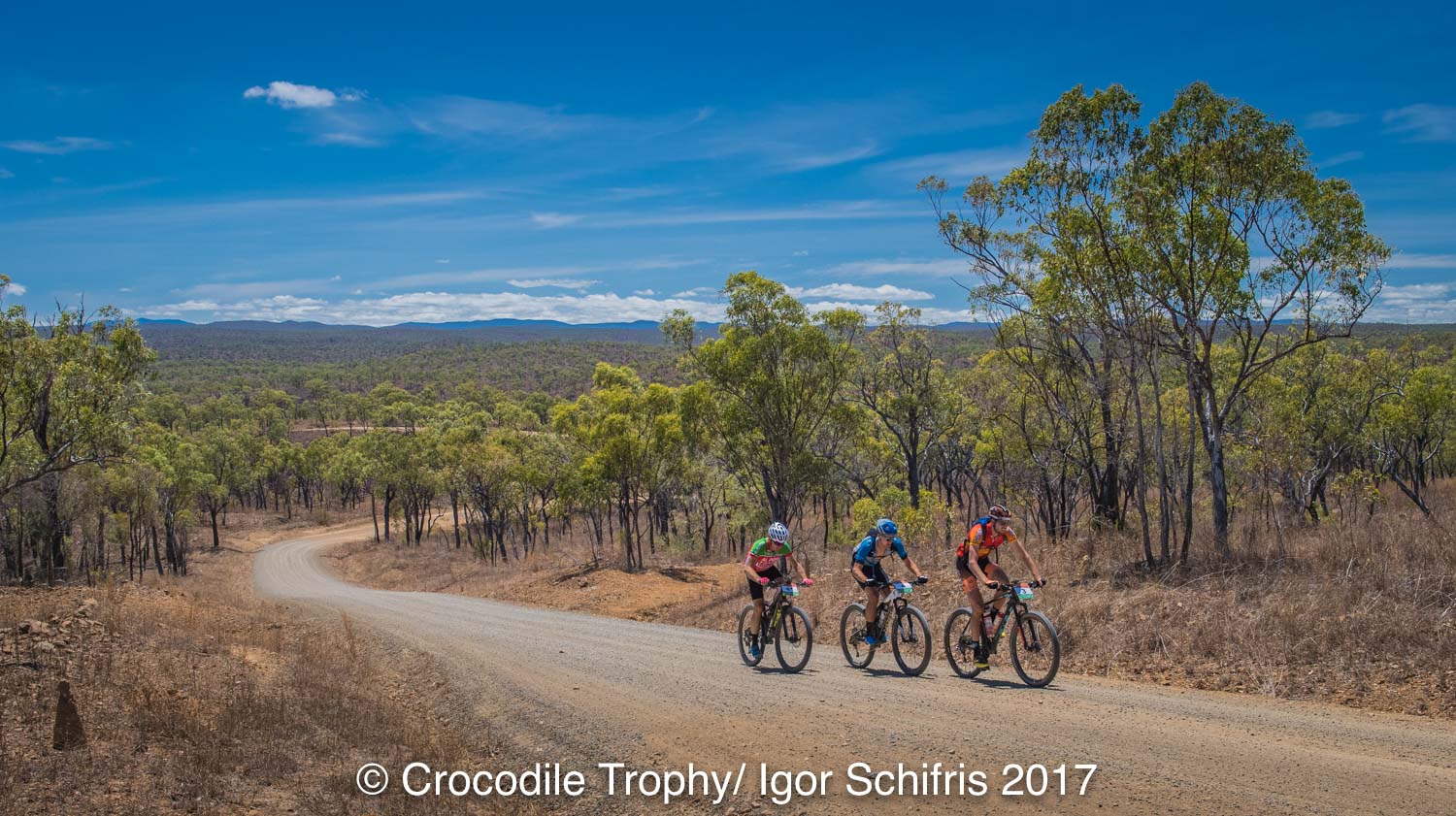 He added that he enjoyed the Australian racing surroundings with wallabies and kanagroos keeping the riders company on most days. “I love this race”, he concluded. “I can’t see why I couldn’t do this again, we’ll see, but this is a historic race. I’m here because I realised [in my retirement] that I love cycling. I thought I’d never do the Crocodile Trophy or any more stage races at that, but 11 months ago when the race was on I was following Annemiek [van Vleuten] a bit and I thought, you only live once. I don’t believe in bucket lists.” 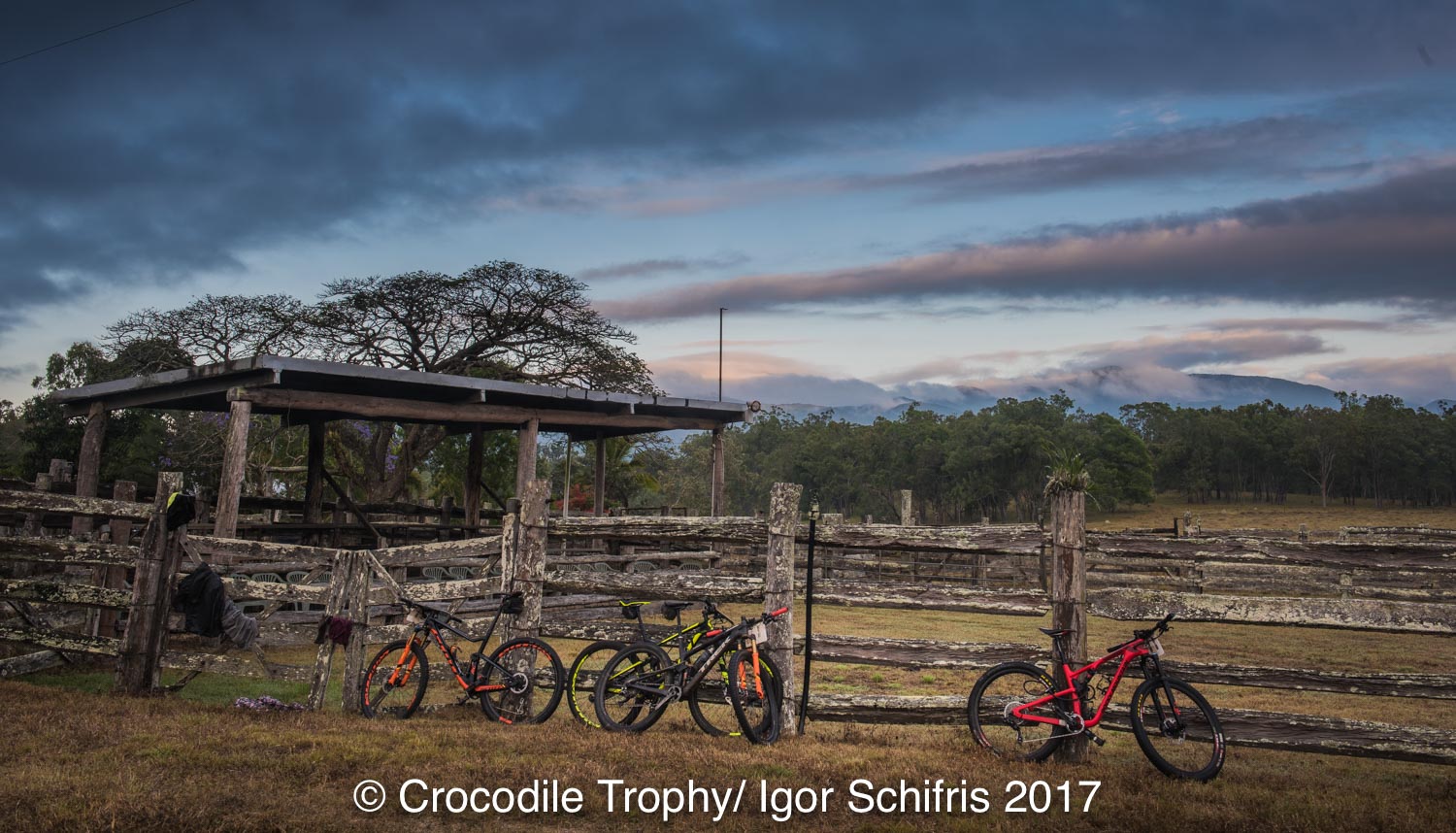 Fastest Australian, like last year, and fourth overall, was Daniel Beresford from Wagga Wagga, the runner-up behind Erik Dekker in the A3 category by +1h06:50. “This Jersey means a lot to me! Its been a years goal to race this race. I prepared all year for this”, he said. To win stage four with Erik Dekker in his category had been a dream come true, he added. “I grew up watching him in the Tour de France. I only just had my last training session in the garage watching re-runs of the Tour de France and he was in a break away!”, Beresford said of the high-profile field of racers at this year’s event.

Third in the elite category overall and fifth outright after eight stages was the Australian Ben May. He said that the biggest surprise for him was that when he had finished the race and realized how much he had learnt from the whole experience, both from other riders and himself. “With all the riders doing a lot of training leading up, making a lot of sacrifices both with family time and other aspects of their life they put it all in and this created an environment where there was a group of really well trained, experienced and passionate riders  in the one place”, the Brisbane-rider who has been riding and racing for eight years explained.

The fifth elite finisher this year behind the Japanese rider Hiroyuki Okamoto was Mike Blewitt, a well-know mountian bike journalist, editor of the Australian Mountain Bike Magazine and multiple Crocodile Trophy finisher. “The experience was really social for Australians. It was a small field this year but very, very enjoyable. Plus I think it shows that the Crocodile Trophy is a really good option for Australians. Canadian l’Esperance said he has got to practice his sprint finish 4 days in a row. That’s what a lot of Australia’s younger elite racers are missing out on here. Day after day they can race and try new things. I’d love to see more of our best racers here.”

One of the local Cairns-racers Brendon Skerke has participated for the 6th time at the event, this year for the first time in a team. This years edition was back to the old school style with long and tough stages in some of Far North Qld toughest terrain.. I love that each year it changes it up and gives repeat riders a chance to experience a different and unique race each year.”, he said. 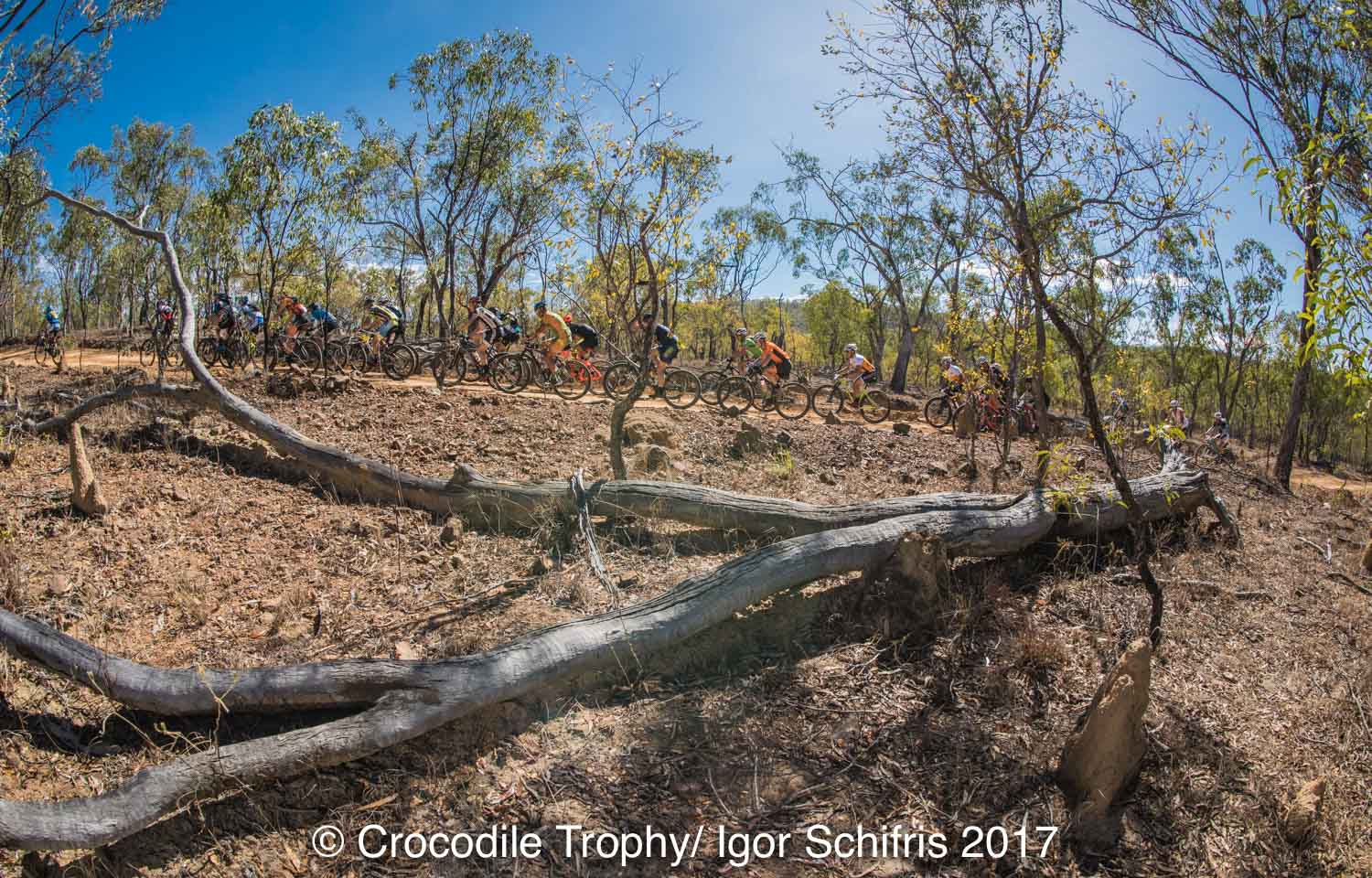 Brendon said that he had training intensively for 12 weeks in the lead up to the event and his ex-pro team mate Bart said that he had lost the desire to ride after retiring from professional road racing, but got back into it by taking up mountain biking.”

As a multiple finisher of the event Skerke said in a recent interview with the Cairns Post newspaper that he enjoyed rubbing shoulders with the best at the start line, “There is no other race in Australia where you can race against true past and present world legends of the sport.”

The current record-holder of most events completed is the Austrian-born Martin Wisata from Sydney. Having completed his 8th Crocodile Trophy, the 39-year old said that after years of really battling across the finish lines, this year had been a solid and thrilling racing experience, fighting for GC and age group positions. “Getting the green [Austria-leader] jersey in Smithfield was a real surprise! A leader jersey of any sort had never been on my cards and it was a thrill to defend it for a few days”, he said handing it over to fellow Austrian Peter Urdl for day four. “So much preparation goes into this race – I know that Peter [Urdl] trained with a coach specifically for this event and it is the main motivation for all my training rides and races throughout the year”, Wisata said, who plans to return to the Croc start line again next year.

Back to the traditional October date for 2018

The organisers said that they were content with the feedback from the riders after this year’s race „We’ve had a great local team that supported us putting together the stage plan for this year and now more than ever am I determined to keep organising the hardest mountain bike stage race on earth”, race founder and owner Gerhard Schönbacher concluded and announced that the MEPT – Crocodile Trophy would return to Tropical North Queensland in October 2018. The confirmed dates are 13th – 20th October 2018. 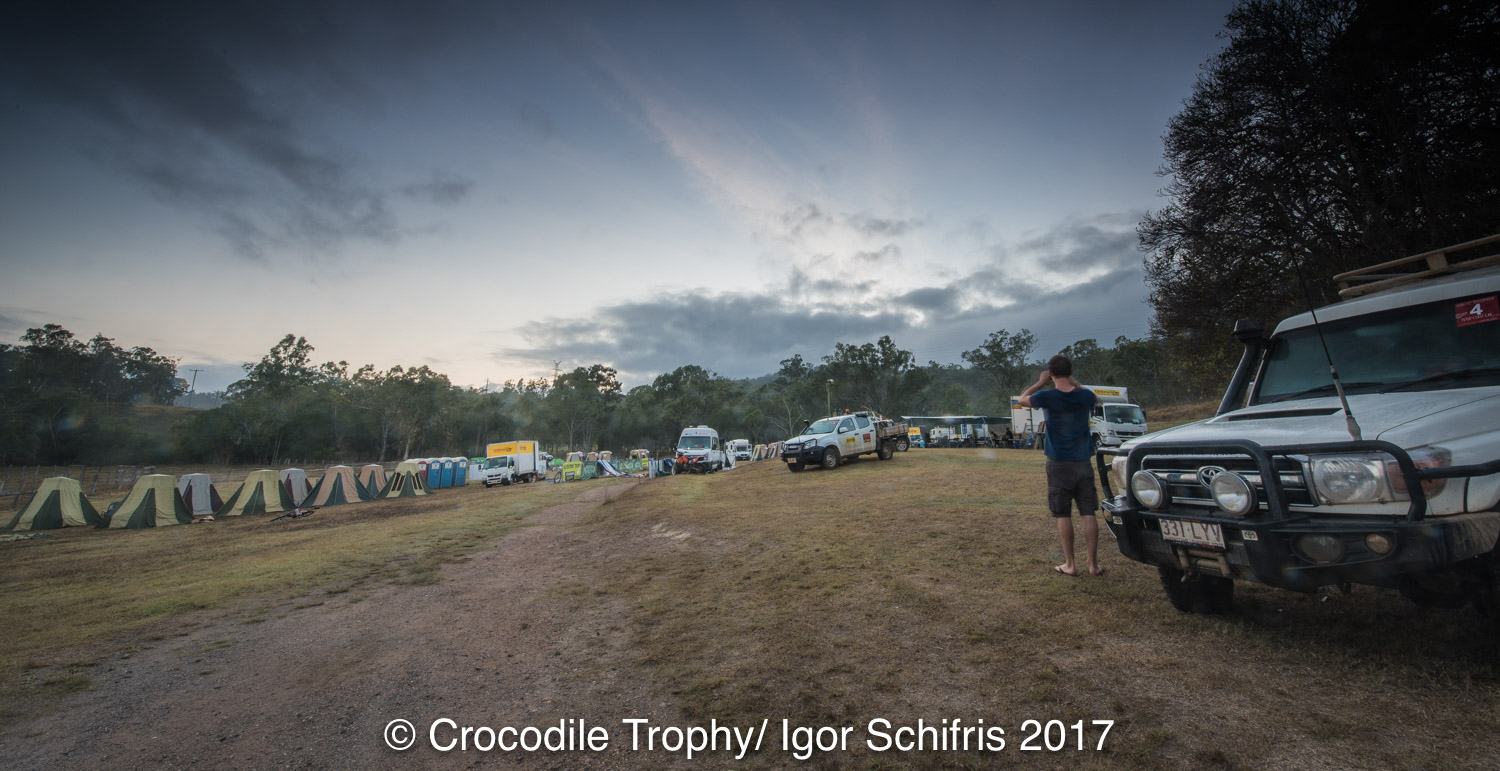