We check out a high tech new helmet from POC, Bluetooth headphones from earSHOTS, frame contact free hitch rack from Thule and more.

Happy World Championships! We won’t post any spoilers here in case you haven’t caught up on all the action, but the rough and tumble courses at Val Di Sole make for some ripper viewing and showed the value of ‘experience’ when it comes to winning big races.

It’s been a big couple of weeks for the crew at Flow; we’ve published deep dives on what native logging means for Blue Derby and how bike brands are solving the issues relating to recycling composites.

After many months of bashing trails on the new Norco Sight VLT and Pivot Firebird, we have pressed play on our final reviews of these hard-charging big travel brawlers. We also saw GT launch a new high pivot Force, Canyon lifted the veil on a muy caliente Lux Trail, SRAM showing off its new MTB inspired gravel groupset, fork, wheels, and dropper, and we took a hands-on look at the POC Kortal Race MIPS helmet.

We also talked to local riders about NSW Parks and Wildlife’s draft plan of management for Sydney’s Royal Royal National Park and what has them worried and took a look at the revitalisation of the Forrest MTB trails. We learned about the novel use of the National Parks Act that is allowing the Indigo Epic to go ahead and documented some paranormal activity at the new Haunted Hills Bike Park.

Finally, we have teamed up with our friends at Canyon to give away a brand new Spectral:ON CF 6 — yep, you read that right, we are giving away an e-MTB.

That about covers it, so without further ado, sit back and grab something to drink and maybe a snack and enjoy another edition of Flow’s Fresh Produce. 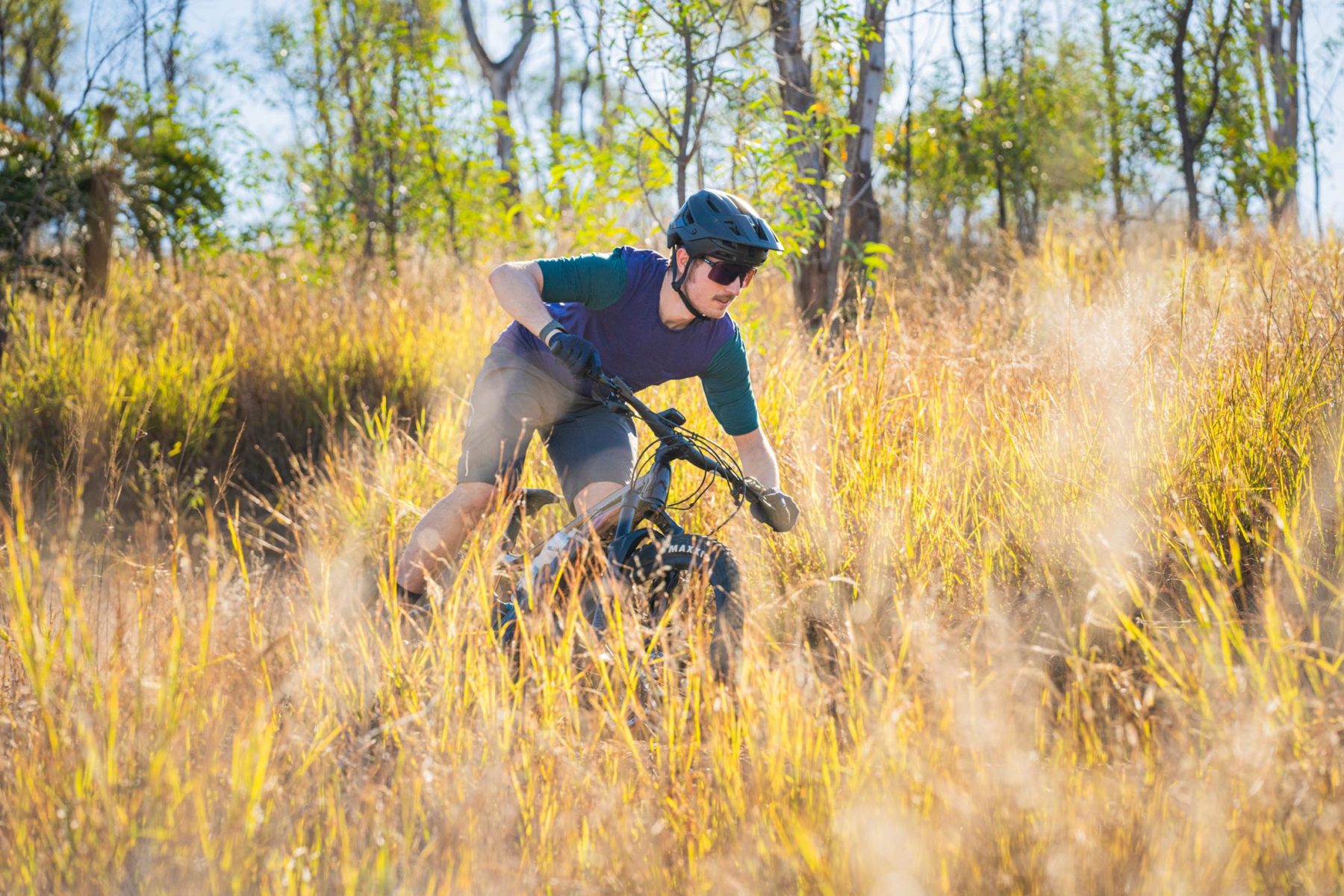 We’ve got our hands-on, or body into rather, the Velocio’s Micro Modal Trail Tee. Modal is a semi-synthetic fabric that is made by spinning reconstituted cellulose from beech trees and is becoming increasingly common in activewear because it is softer than a baby’s bottom, it breathes well and dries quickly. It’s a pretty basic jersey, with no pockets or glasses wipes, but it’s also almost totally logo-free, so you aren’t a rolling billboard on the trails. The cut is on the slimmer end of the spectrum, but it’s a long way off lycra.

Velocio’s baggies follow the same design ethos as the trail tee — lightweight, nearly logo free and only have the features you need, and none you don’t. Made from a lightweight, double woven, Italian milled DWR treated fabric, there is a zippered pocket on each thigh, and a Cobrax slide locking button and webbing belt prevent them from falling down. They are slimmer fitting, and come in just above the knee but are long enough to prevent the dreaded gaper gap above your knee pads.

Velocio offers both in men’s and women’s cuts and colours, in sizes ranging from XS to XXXXL.

Funnily enough, we’re not doing a whole lot of travel at the moment. But in preparation for flightier times ahead, we’ve got this snazzy new Bontrager Travel Backpack to help get us in the destination-chasing mood. It’s the ideal size for carry-on luggage, with an expandable design that means it can swallow a surprising amount of gear. We’ve been able to fit riding shoes, kit and a helmet in the main compartments, along with all the necessary work gear for an overnight photoshoot. There’s heaps of dedicated storage, including a cosy fleece-lined laptop sleeve, a pocket for your phone, and zippered organisers to keep your essentials within easy reach.

Designed for those who like to tune-in while they’re tuning out, the earSHOTS wireless headphones utilise Bluetooth connectivity so you can listen to tunes and receive phone calls on the go. You’ll get up to four hours of run time, though the carry case doubles as a battery pack for charging up the headphones, which is very handy.

They utilise a magnetic ear clip to keep them secure, and Jono says he hasn’t been able to shake them free yet. They’re quite light, and comfortable enough that you kinda forget you’re wearing them after a while. The audio is nice and clear, both for music and for taking calls, and we’ve not had any issues with the Bluetooth connection. There’s also a Solo mode that switches one ear off, so you can hear ambient sounds more easily.

Now THIS is very cool indeed! It’s a precision digital torque wrench from PRO, which can be micro-adjusted anywhere between 1Nm to 20Nm. An LCD display shows you your preset torque value, and a green LED indicates when you’re getting close to that number. Go too far, and you’ll get a warning beep along with a flash from the red LED. It takes a couple of goes to get used to it if you’re coming from a clicky analogue torque wrench, but we love the accuracy and the combination of audio and visual feedback.

Included with the wrench is a dedicated hard case and a whole bunch of hex bits along with T20 and T25 torx bits to cover you for most fastenings on a modern mountain bike. It is a pricey tool, but it’s actually quite good value compared to other high-end torque wrenches on the market, and we expect gear freaks and fastidious home mechanics will dig the precision approach.

Amongst PRO’s massive array of bike tools, some of the more common options are actually available in two different spec levels. The Team Lockring Tool is one such example – it’s a high-end cassette lockring tool that’s produced from laser cut heat-treated steel to provide a neat and accurate fit. Designed for professional bike mechanics, or just those of us who like The Nice Things™, it features a dual compound grip for comfort, and the handle is built longer than usual to provide increased leverage.

Another Team-spec tool from PRO is this shiny, and very adaptable Y-Wrench. It’s designed around a smooth CNC machined alloy body, with three open-end socket heads that can receive a variety of included tool bits. These reversible bits give you 12 different functions, with an 8mm adapter stored in the centre of the tool body. It’s a neat setup that gives you quick access to your most regularly-used tools, with the spare bits stored in dedicated magnetic pockets.

We’ve just received a bike rack upgrade in the form of the latest T2 Pro XTR rack from Swedish brand Thule. Ideal for carrying bigger travel mountain bikes and e-MTBs, the T2 Pro XTR differs to most bike racks on the market in that it doesn’t clamp to any part of your bike’s frame. Instead, a large adjustable arm clamps down on the front wheel, and a small tray at the back uses a ratcheting strap to cinch down the rear wheel. If you’ve ever battled with fitting your weirdly-shaped mountain bike onto a rack, or winced as you’ve clamped down on its lightweight carbon or alloy downtube, you’ll understand the appeal of the T2 Pro XTR.

Thule claims you can fit any wheelsize from 20-29in, and tyres up to 5in wide. It has a stated maximum load capacity of 55.5kg, so it’ll handle two hefty e-MTBs. If you need to carry more than two bikes, there’s an Add-On upgrade kit that’ll allow you to carry four bikes in total.

The Thule T2 Pro XTR is designed to fit a standard 2in hitch mount, so all we had to do was remove the towball and slide the new rack into place. Loading up bikes is straightforward and the whole thing feels very solid. A spring-loaded ‘HitchSwitch’ lever allows you to tilt the whole rack down, so you can access the car boot without having to remove the bikes.

However, it’s worth noting that the rack and bikes will obstruct the rear lights and number plate on some cars (like Wil’s), in which case you’ll need to add on a Thule Universal Lightboard to ensure you’re street legal. Those Universal Lightboards sell for an additional $159 AUD, making this a very premium option indeed.

The Kortal Race MIPS is not only a brand new helmet for POC, it’s also the first bicycle helmet to feature the MIPS Integra liner. Along with the integrated NFC Medical ID, 360° retention system, breakaway visor, and aramid-reinforced core, this is about as high-tech as mountain bike helmets get! For more info, check out the full story on the POC Kortal Race MIPS trail helmet.