Aiming to create heavily featured trails that cater to the entire range of skill levels, George Town could fill the gap between Derby and Maydena with a fresh approach and a blank canvas

The new gateway to Derby

When most people fly into Launceston, they load their bike bags into a rental car and set sail for Derby. Now there is a pretty darn good reason to point your car north, and make a pitstop in the coastal settlement of George Town on your way towards the east coast.

Like a lot of Tasmania, George Town is a municipality built on industry, and similar to so many others the local council is looking to boost and diversify its economic and tourist opportunities.

Where is George Town, and why build trails there?

“We’re only 35 minutes north of Launceston, and we’ve got excellent beaches, as good as they get in Tassie for swimming and surfing. But George Town isn’t really on anyone’s radar as a place to visit on weekends or as a holiday destination,” says Peter Rickards, Projects Manager at the George Town Council. “The mountain bike project is a way of slingshotting us back into the tourism limelight, as a destination people can visit on day trips up from Launceston, or tag onto longer trips as well.”

The trail network at George Town, well actually, networks plural, will be located at Mount George near town and the Tippogoree Hills about five kilometres south.

The philosophy behind the project is to create heavily featured trails that cater to a diverse range of skill levels, with everything from green to black trails, offering the opportunity for skills progression. And most importantly, they are shuttle-able!

Divided into two sub-areas, the Summit Trails and the East Peak Trails, Mount George has a total of 16km of singletrack with seven gravity trails, two climbing trails and a traverse to connect the peaks. The descents average about 2km in length with 120m of elevation drop. 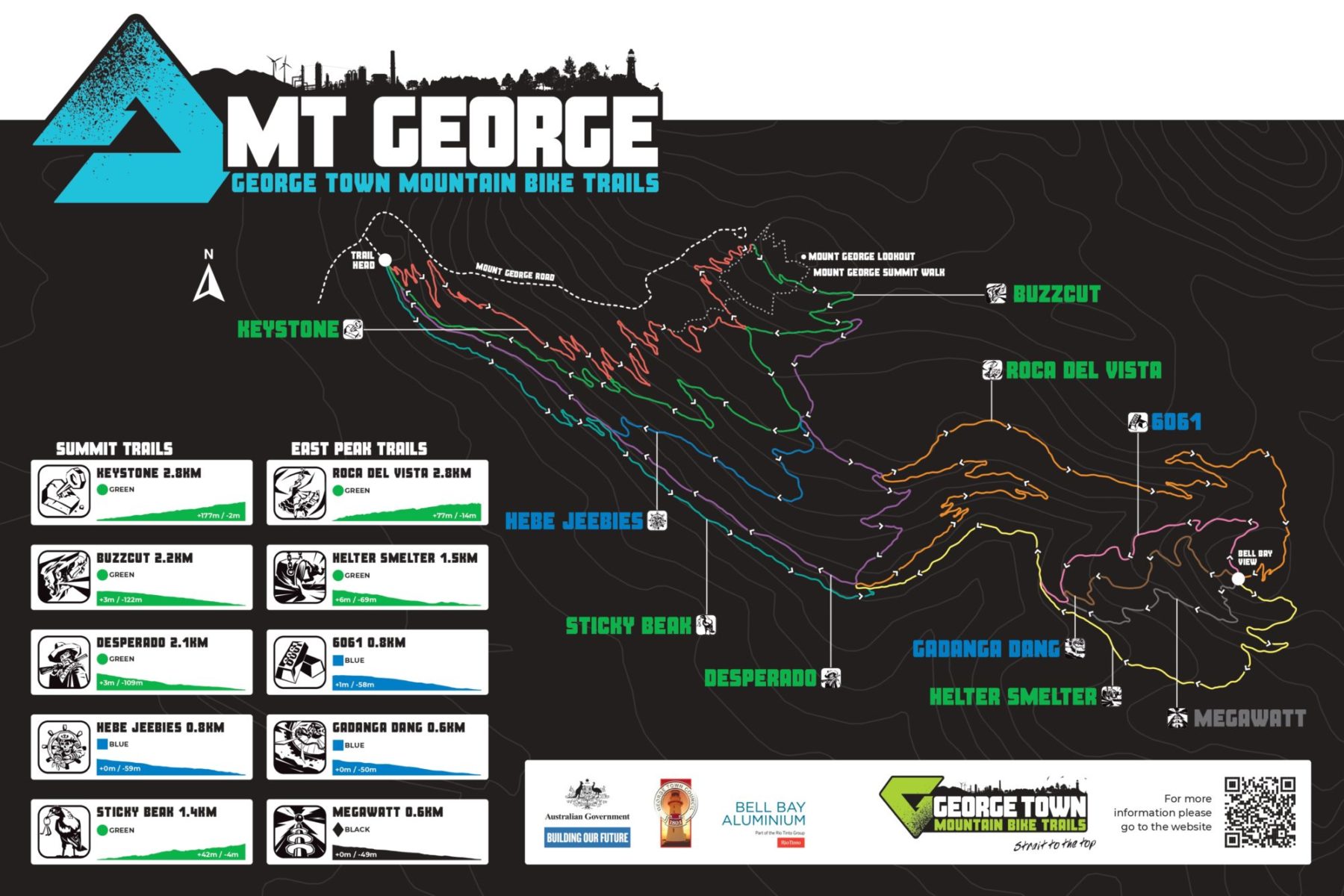 “All the trails have multiple lines, and even the green descents have some rowdy b-lines on the side to keep everyone interested. I’m always quick to point out that whilst we do have green beginner trails – they’re definitely beginner MTB trails, which is a convoluted way of saying we’ve got rocks coming out our ears,” says Rickards

The Tippogoree Hills have the opportunity for interesting longer descents, but also backcountry style riding through rugged terrain and some exciting big slabby rock features.

Glen Jacobs from World Trail continues, “The terrain is completely different to St Helens and Derby. There’s a lot of rock with huge views over the ocean. It’s a little like Stromlo in the ACT with red dirt, loads of little valleys, gullies and undulating elevation. We’re keen to engage with the town, and the coast with the trail network.”

World Trail finished construction on the Mount George network in the first half of 2021; however, when it came time to cut the ribbon, mother nature had other ideas.

“The Mount George Trail Network opened at the beginning of October. We had tried to open the trails twice before October, including back in May, but both times were foiled by poor weather. Turns out that third time lucky wasn’t all that lucky either, and we had 50mm of rain in the 24hours prior to opening — the exact conditions we were trying to avoid — and a further 30mm in the following week,” Rickards says.

“Whilst the opening day was great, the combination of fresh trail, wet soft soils, and an influx of riders meant that the trail sustained a reasonable amount of damage. But the general consensus is that they’re rad, and people couldn’t wait till they dried out,” he says.

After a short closure to fix up the opening day hangover, and add a bit of extra drainage, the trails were re-opened in stages, and Rickards tells us they have had the much needed dry weather for things to pack in.

With only 120m of elevation to play with, there was always a question mark about how well shuttles would work on Mount George, but a local operator has come in and set up Send It MTB shuttles. The trails are short, but that means so are the shuttle turnarounds, and Rickards tells us it takes about one minute before you’re at the top, meaning you can get serious bang for your buck in a few hours of riding.

The second proposed network will meander up into the Tippogoree Hills on the south side of Bridport Road. The planned trails will be mostly longer format trail riding, with one or more ascending trails, a few extended gravity trails, and some longer wilderness style singletrack.

“The Tippogoree Hills have the opportunity for interesting longer descents, but also backcountry style riding through rugged terrain and some exciting, big slabby rock features. There are also these nice wide open forest areas which feed into dense gullies which will make for great longer wilderness style rides,” says Rickards

Jacobs continues, “The soil and the rocks, and the style of trail the guys are building — the boys are going to town on it. There is one trail in there so far, it’s called Devil’s Elbow, I’ve never seen anything like it, it’s going to be one hell of a gravity trail.”

Set for a total of 57km, the Tippogoree Hills network is still under construction and will hopefully be open by March 2022. We say hopefully because World Trail is on track to have everything buttoned up by that time, but the opening depends on the completion of a rail line underpass that is at the mercy of a civil contractor.

As this is happening, Trailscapes is nearly finished with a pump track in the George Town CBD — literally next to the main street running through town. All that’s left here is for the asphalt seal to be laid down, which is planned before the end of January.

How did we get here?

The project was initially championed by the George Town Chamber of Commerce, who saw the effect mountain biking destinations were having on boosting the local visitor economy. Dirt Art was engaged to conduct a feasibility study, preparing a design draft which was used to secure $4.4 million in funding from the Australian Government, as part of its Community Development Grants Program.

Dirt Art Managing Director Simon French points out that their design was only a starting point; he believes George Town has the potential to provide riding experiences that other destinations, like Derby and Maydena, are currently lacking.

“It’s close enough to Launceston that you could duck up for an after-work ride, or come up for half a day on the weekend — you’re not making the whole day commitment like you have to when you go to Derby,” French continues. “The other thing is it actually promotes a new way of driving to Derby, and it’s really not that much of a detour. I think there is a huge opportunity for George Town to become a new gateway into Derby.”

Councilor Greg Kieser, the Mayor of George Town Council, continues, “As a keen mountain bike enthusiast, I am very excited about what a world-class mountain bike trail development will have on our visitor economy, particularly from interstate and overseas.”

The Mayor added, “I am expecting we’ll see a lot of local traffic from Launceston and surrounding areas. I believe Launceston has a high number of MTB’ers, and our trail networks will be close enough to come up after work, or for a half or full-day with the family on the weekends.”

Long-standing manufacturer and local employer Bell Bay Aluminium, part of the Rio Tinto Group, have been a key driver of the development. The smelter has been incredibly supportive of the project, and a significant portion of the trail network will be developed on their land.

Shona Markham, Bell Bay Aluminium’s General Manager, is excited about the development and what it can do for the region.

“With the growth in mountain biking participation in Northern Tasmania, along with the obvious natural attractions of the Tamar Valley region, we are eager to partner with the council, community and region to explore the huge potential of the mountain bike tourism. This is a great example of where an industry like ours and tourism can work hand in hand,” she says.

With big community projects, like a trail network, gaining support from the wider community is paramount to its success. Despite the lack of a riding scene before the trails were built, the locals are on board with bringing mountain biking to George Town.

“We did a community meeting up there, and we had a packed hall of a little over 100 community members, most of whom weren’t bike riders, and they were overwhelmingly supportive of the project. Some didn’t understand what the project was, but by the end of the meeting, there was unanimous support from the community,” says French.

How to get there?

George Town is roughly a 35-min drive from Launceston or a 45-min bus ride. If your trip to Tasmania sees you crossing the Bass Strait via the Spirit of Tasmania, it’s a little over an hour from Devonport via the Glengarry Hwy.

As a sleepy coastal town, there are some quirky places to stay in George Town proper, or if you’re looking for beachfront accommodation, check out Low Head and Bell Buoy Beach.

The York Cove Holiday Hotel offers self-serviced apartments right on the edge of the River Tamar, while the Low Head Pilot Station is the oldest Pilot and Signal Station in Australia and can sleep groups as small as two or as large as nine people. Low Head hosts two caravan parks, Low Head Tourist Park and East Beach Tourist Park offering camping and holiday cabins, in addition to a range of AirBNB’s.

Other things to do

With the beaches at Low Head there are calm coves for swimming, as well as surf breaks — just don’t forget your wetty. The River Tamar has a vibrant ecosystem with world-class diving opportunities, and George Town even has its own colony of Fairy Penguins — check out Low Head Penguin Tours.

If you’re after some of the local culture – George Town is Australia’s third oldest settlement, and there is no shortage of history. Make sure to check out the Bass and Flinders Centre maritime museum to see a replica of the Norfolk, the ship that discovered Tasmania.

If you’re hungry – check out George Town Sea Foods, Rickards says they have the best fish and chips he’s ever had, and Tamar Cakes is the best bakery in town. He also says to keep an eye out for the Yukiya food truck.

Or for a more relaxing adventure – check out one of the many wineries in the area, like Jansz Wines, Pipers Brook or Bay of Fires Winery, or the Fanny’s Bay Whisky Distillery, Hillwood Whiskey Distillery, or the Zenith Distillery.

For more information and updates on the George Town mountain bike project, head over to the council’s website here.