The Crankworx France vs. The World team captain and current leader in the Crankworx DH Championships, Loic Bruni, seized the win in the Les 2 Alpes downhill race with a commanding lead and a roar from the French fans. 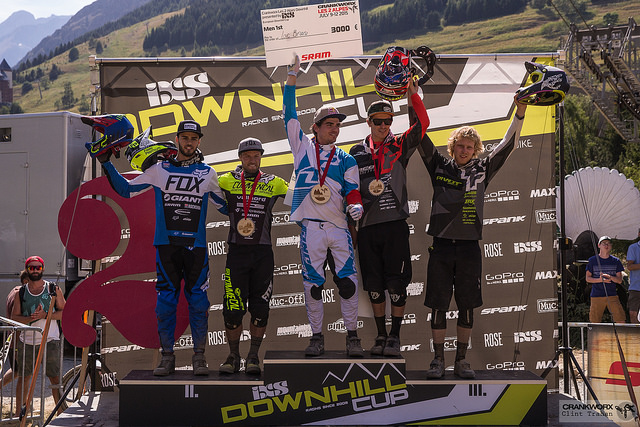 For much of the race, the three-time winner of the Crankworx Les 2 Alpes Downhill presented by iXS – European Downhill Cup, Gee Atherton, held first spot, having had an early crack at the baby powder-fine dust of the run. Once the top racers came barrelling down the hill, however, he quickly found himself out of the hot seat, fellow countryman Bernard KERR (GBR) knocking him down, and Bruni securing the win by a stellar 4.6 seconds for a 3:44.7 finish. 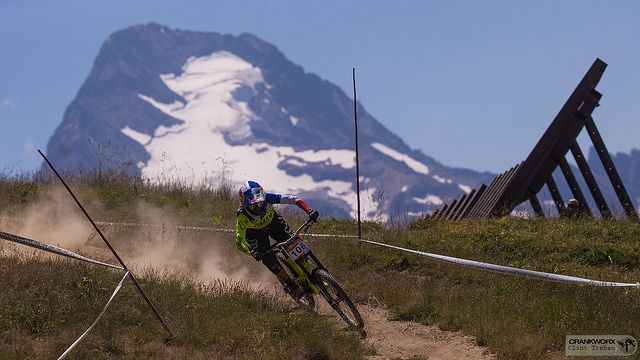 “My run was quite loose, but I felt fast. It’s good in front of Remi and, you know, we’re Team France, so it’s good,” he said, referencing the friendly Crankworx competition to see if France would dominate on home turf.

Altogether, Team France secured three first place wins, putting them well out front of Team World; although, the wins did not come easily—including Bruni’s. Heading into the gate at the top of the course, he discovered he had a flat tire and almost had to drop out as he did not bring mechanical support.

“I saw my friend. He came here to watch and ride and he had a Lapierre—a good tire—and then he gave me his wheel just before I raced,” said Bruni, who was all smiles on the finish line. 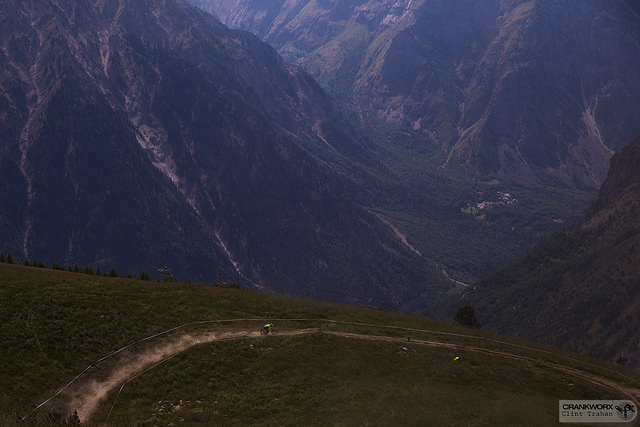 Wyn Masters, who was seeded first coming into the finals, was not so lucky, getting a flat on course to finish out of contention.

Bruni’s fellow Team France teammate Myriam NICOLE (FRA), meanwhile, said she felt she was in a shaky position before her last run, having just returned to racing.

“On this track, it’s a bit hard to do a really perfect run, so there is always some mistake. I haven’t been racing for more than two months because I had a broken collarbone, so I’m really happy with the win,” she said.

Sitting five seconds behind after the seeding run, Nicole had to lay it on the line to beat Tracey HANNAH (AUS), whom she edged out by .02 seconds for a 4:28.3 win. Asked why she feels the French riders are doing so well, Nicole chalked it up to the terrain. 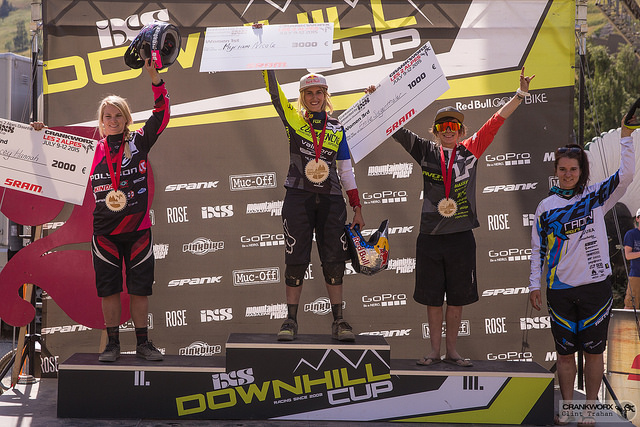 “I think we’ve got good trainers in France and the Alps help us to do good as well,” she said.

France versus The World was devised to see whether the strong French mountain bikers were reaching the status of French road cyclists, leading the pack in the two-wheel world, though it did not have any monetary value on the line.

This year, Crankworx did introduce a significantly larger prize pot, however, rolling out four series races and the King and Queen of the Crankworx World Tour. Some $10,000 is riding on the Crankworx DH Championships, for the rider who can win all four races, and $25,000 for the King and Queen of Crankworx, and that has one a frontrunner for King sweating. Bernard Kerr admitted he has woken up from fitful sleeps over the standings, particularly one where he dreamed it was like a video game. 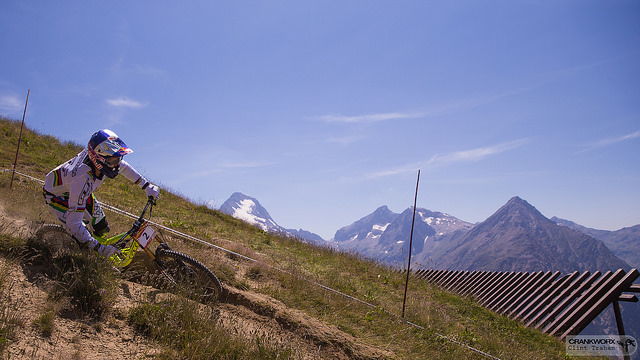 “It was like a game like Mad Skills MotoCross or something, but like a Pump Track version and I clicked finish too early and I came in sixth and I woke up like, why did I click finish? I could have done better,” said Kerr, noting $25,000 is money worth worrying over.

This final event wraps up the last of four days of competition at Crankworx Les 2 Alpes and the second stop of the Crankworx World Tour. The Crankworx Whistler runs August 7-16, 2015.