A Santa Cruz without VPP suspension and room for two water bottles inside the front triangle? The latest iteration of the California based outfits XC racer is turning heads in more ways than one.

The Santa Cruz Blur was first introduced in 2002; it had 115mm of rear travel and used the brand’s VPP (Virtual Pivot Point) rear suspension. VPP has become a defining feature of bikes from the California-based brand over the years, but Santa Cruz actually purchased the design from an obscure mountain bike brand called Outlander. The Blur, alongside the original V10 DH bike, were the first instances we saw of this suspension layout.

The Blur disappeared from Santa Cruz’s lineup in 2014, with the Tallboy forced to pull double duty as the most XC suitable bike in the brand’s line. Finally, in 2018 the Santa Cruz resurrected the Blur to serve as the brands full bore skinsuit and aero helmet XC machine, allowing the Tallboy to stretch its legs as a trail bike. The revived Blur had a full carbon frame, taking advantage of the VPP suspension layout to create 100mm of rear travel and rolling on 29er wheels.

If you’ve been paying close attention to the XC World Cup or the Pro XCT Tour in the US, you would have seen riders like Maxime Marotte, Greta Seiwald and Keegan Swenson racing aboard a slightly different version of the Santa Cruz Blur. Gone were the struts that connected the chainstays to the seat stays and with it the VPP suspension.

We now know that this was the new Blur hiding in plain sight — although the Salmon paint job didn’t do it any favours — and there is quite a lot going on with this new XC bike and the Juliana version, the Wilder.

The elephant in the room is, of course, the rear end and the lack of any VPP suspension design.

Instead, the new Blur and Wilder use what Santa Cruz calls its Superlight Suspension layout, which trades the counter-rotating links for flex stays.

Flex stays are not a new technology, nor are they unique to Santa Cruz, but with improvements in carbon fibre engineering and manufacturing know-how, we are seeing them employed broadly across weight conscious XC bikes. Santa Cruz says this new rear end is the “superlightest” suspension it has ever made, shedding off a hefty 289g from its predecessor.

Speaking of weight, Santa Cruz tells us a large CC carbon Blur, with a SIDLuxe, and all the frame hardware except the rear axle weighs 1933g in the Dark Matter colourway. The brand also says the Salmon paint job adds about 48g and the C level carbon adds another 240G — so for those keeping score at home, a large Salmon Blur C frame will weigh 2,221g.

According to Santa Cruz, the Blur and its VPP suspension break-up also allowed it to create a leverage curve that improved efficiency, an essential factor when you’re trying to keep up with Tom Pidcock and Loana Lecomte.

The brand says rather than using lots of anti-squat to resist pedal bob; instead, it used the properties of the progressive, high leverage shock and a lower, more consistent leverage curve for pedalling support. Reducing the anti-squat also reduces the chain’s influence on the suspension, and Santa Cruz says the new rear end on the Blur improves traction and sensitivity on the ups and downs. 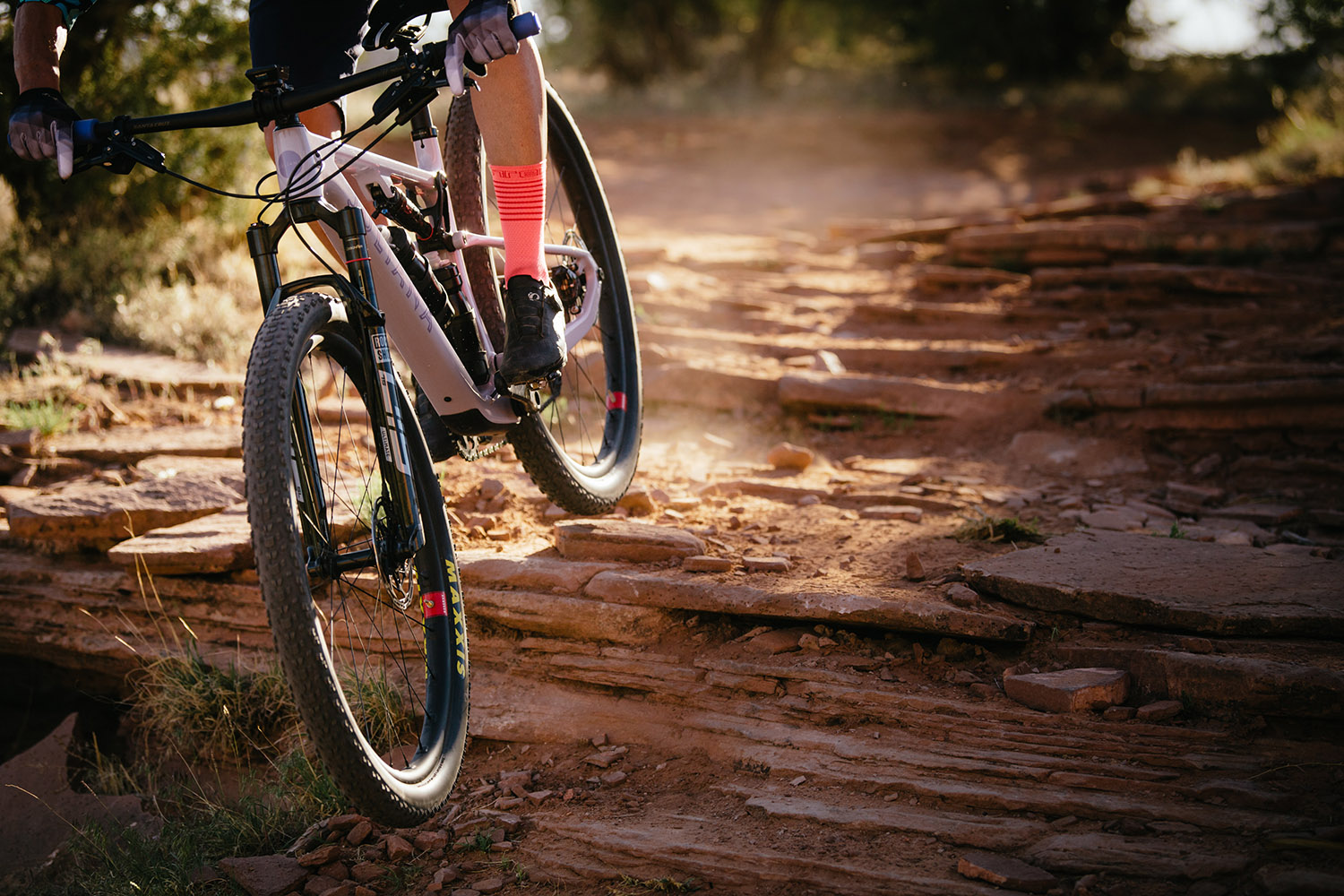 The brand also claims the new kinematics improve efficiency because less pedalling input from anti-squat is utilised to overcome the rider’s body weight influence on the suspension.

The final knock-on effect of the Blur and Wilder moving away from VPP suspension, without the struts connecting the stays, there is room for a second water bottle inside the front triangle.

A modern bike launch would not be complete without the words longer and slacker somewhere in the press release, and not to worry, the new Blur and Wilder are both of these things.

Santa Cruz has introduced size-specific seat tube angles and chainstay lengths to create a more consistent fit across the size range. The seat tube in a size S measures 76.5-degrees and sees 430mm stays, while the XL is 75.7-degrees with 438mm chainstays.

The Blur will also be available in a TR build, which sees the rear travel bumped up to 115mm with a 120mm fork out the front. This slackens the head angle to 67.1 degrees, the seat angle to 75-degrees and brings the reach down to 358mm, all in size M.

For perspective, the Tallboy, which is the next step up in travel with 120mm of squish, sees a 65.7-degree head angle, 76.6-degree seat angle and stack and reach figures of 450mm and 610mm in size M.

The Juliana version of this bike, the Wilder, will be identical to the Blur except for the paint job and touchpoints, but will only be offered in the TR build kits.

The XC and TR bikes are built around the same frameset, with the only differences coming in the spec. The race plate ready 100mm XC version sees a RockShox SID SL fork and SIDLuxe rear shock —complete with remote lockout — lightweight Maxxis Aspen rubber and short travel dropper post.

On the other hand, the TR builds are spec’d with Fox suspension, with a 120mm 34 Step-Cast at the front, 115mm Float DPS on the rear — sans remote lockout — Maxxis Rekon rubber, and a long travel dropper post.

Select models will also have the first Reserve wheels that don’t have Santa Cruz in the name, the Reserve 28. These 24-spoke carbon hoops have a 28mm internal width and shallow rim bed designed to play nice with 2.2in-2.5in tyres. Spinning around DT 180 hubs, with rim tape and valves, Santa Cruz says these wheels tip the scale at 1367g, a hair lighter than the Roval Control Carbon Wheels we had a look at a few weeks ago.

Aussie Santa Cruz distributor Lusty Industries has confirmed we will get both the Blur and the Wilder as complete builds and framesets, and tell us they should be available in stores by August.

The Blur and Wilder will be available in both the C and higher grade CC carbon. Locally we will see two complete Blurs starting at $9199.00 and topping out at an eye-watering 14,959.00 should you want X01 AXS with Reserve wheels and Fox Factory suspension. Unfortunately, only one complete Wilder will be available in Australia, with SRAM GX mechanical and Fox Performance suspension for $9,149.00.

If you’re only in the market for a frame and shock, the Blur CC frame with a SID Luxe will cost $5,949, and the Wilder CC Frame with Factory DPS shock is priced at $5,799.