Flow got a glimpse of the future last week when we were invited to take a sneak peek at the Scott 2015 range. This global giant of sport (not just cycling) always delivers a staggeringly broad and deep range, with incredibly light flagship models, exceptionally refined carbon frames and some of the most versatile bikes out there. Next year’s line up looks set to do it once again. Is it just us, or does the product cycle gets faster every year – it’s not even tax time yet! Here are some of the range highlights.

Of the bikes we had access to, it is only the Gambler which has undergone serious revision for 2015. This is no surprise, as the Spark, Genius and Genius LT have all had significant overhauls in the past few years. Nonetheless, Scott has pulled together a seriously stylish looking lineup, with some stunning lightweight cross country and trail bikes in particular.

The world-beating Spark line continues to be available in two wheel sizes, with a 27.5″-wheeled 700 series, and the 29er 900 series. It’s not just the wheel size that differs between the two variants – with the smaller wheels the travel is increased to 120mm front and rear, while the 900 series runs 100mm. This makes a lot of sense, for many reasons; 100mm of travel helps keep the big-wheeler more responsive, allows a lower front end height, and the greater roll over of the big wheels requires less travel to rumble on through.

With 120mm, the 27.5″-wheeled Sparks have the capability to play double duty as a cross country race bike and as a trail bike too, which will ensure they continue to be a super popular machine for occasional racer. Add to this Scott’s killer ‘three-bikes-in-one’ Twinloc system, and you have a very versatile machine. This system (found across the Spark, Genius and Genius LT lines) reduces and stiffens the travel at the flick off a switch, and can lock the suspension out entirely if you push the lever through to its second position.

As in previous years, the Spark is available in a range of frame material configurations too. There’s the full IMP carbon frames, carbon front / alloy rear for the mid-priced bikes and then full alloy framed bikes are the lower end of the range. In a trend that we’re confident will become increasingly common, the 29er bikes are only available from size medium to x-large, while the 27.5″ 700 series runs from small t0 large.

We couldn’t take our eyes off the bumble-bee inspired Spark 900 RC, which looks stunning and weighs in at 9.9kg. The SRAM XX1 / Shimano XTR build kit is perfect. As with the other 29er Sparks, travel is rear travel is adjustable from 100-70mm on the fly,

One bike that was not on show (but which will be available in Australia) is the Spark 700 Ultimate Di2. As the name implies, it gets the full XTR Di2 treatment, plus a custom FOX iCD electronic lockout which runs off the same battery as the shifting. Even with all the electronics, this bike is said to weigh only 10.1kg, and it’ll be 27.5″ only. 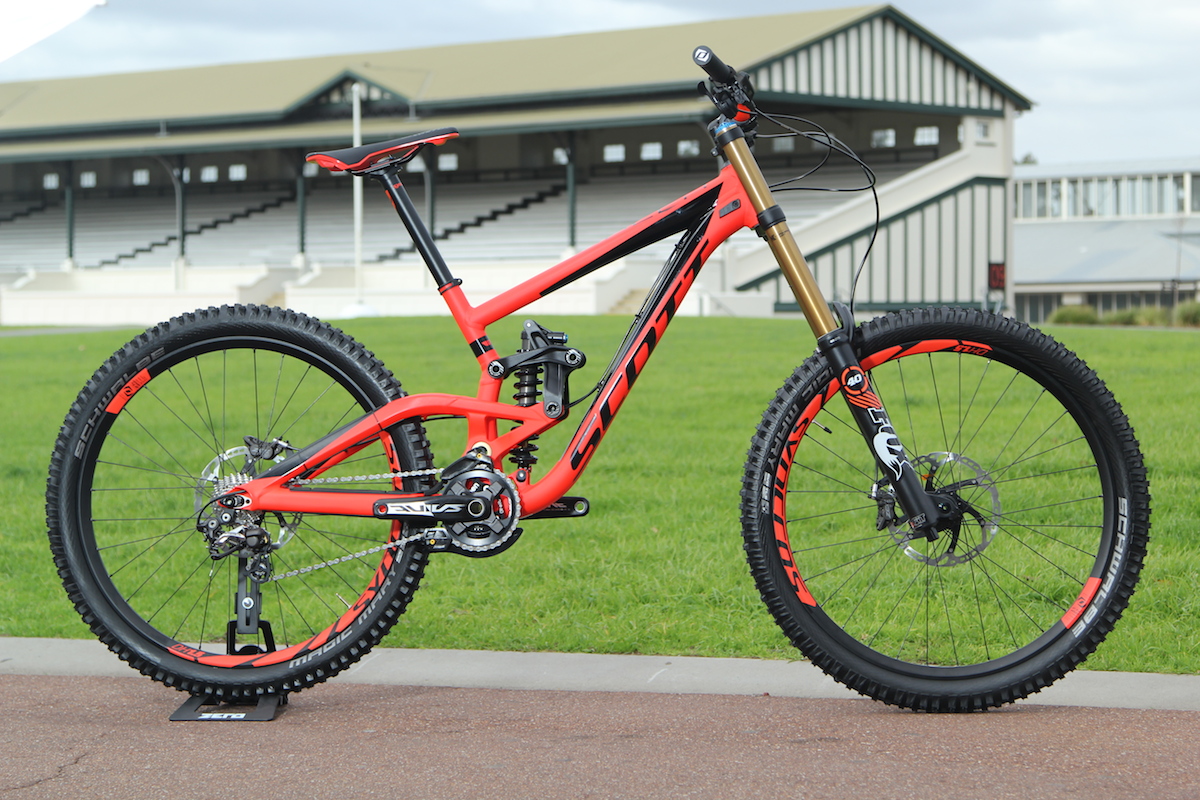 The big news on the downhill front is bigger wheels. It’s no secret that Brendan Fairclough and the rest of the Scott contingent have been experimenting with 27.5″ for some time now (we remember seeing test shots from at least 12 months ago), but now the larger hoops have made it onto the production bike.

While visually the frame looks pretty much identical, it has been re-engineered around the larger wheels to still facilitate some very short chain stay lengths even with 27.5″ rubber. Interestingly enough, the frame is ‘backwards compatible’ with 26″ wheels, though we can’t imagine too many folk will go down that route.

The Gambler retains its massive range of adjustability too, with the head angle alterable from 61-65 degree, 10mm of bottom bracket height adjustment and 19mm of wheelbase adjustment (from 421-440mm). Another subtle tweak has been made to the Floating Link suspension design. It still deliver 210mm of travel, but the kinematics have been tweaked to significantly reduce pivot rotation for better durability and less friction.

Two variants of the Gambler will be coming to Australia. The 710 here will retail for $7299. We don’t unfortunately have pricing on the 720, which comes with Shimano Zee and slightly cheaper suspension items. 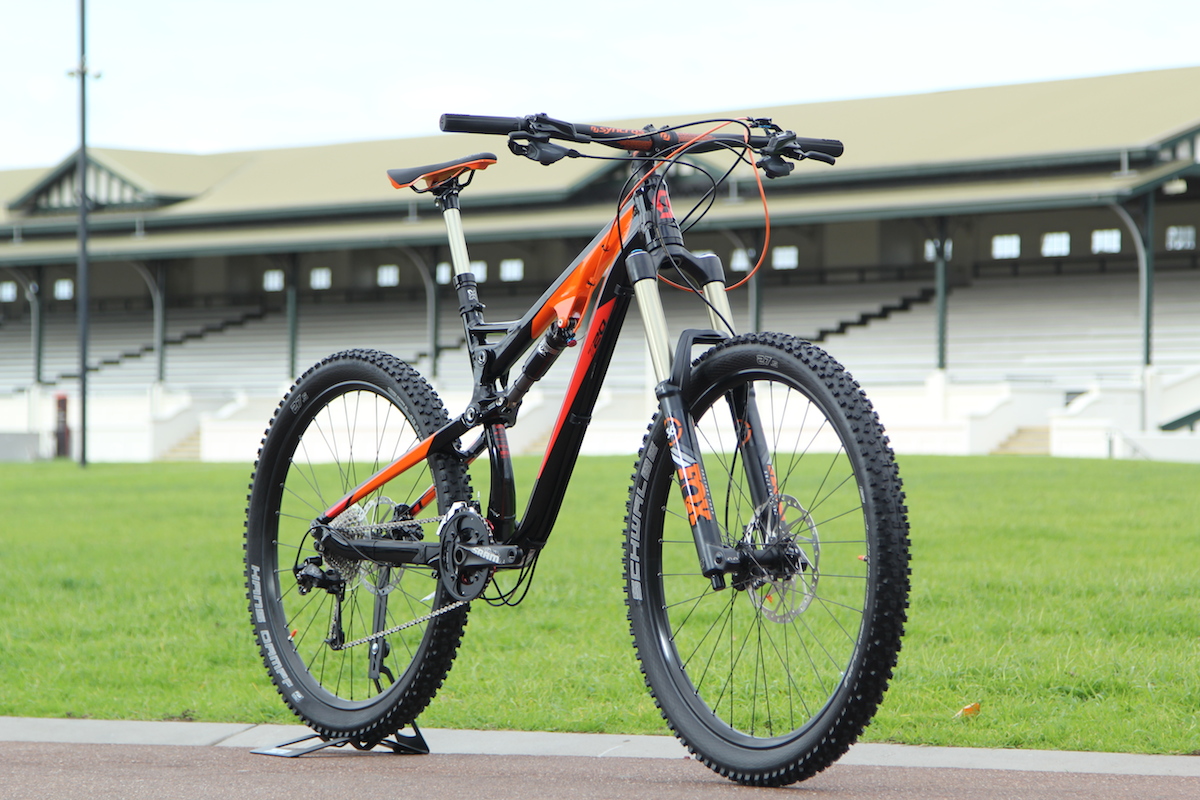 Previously available in only very limited numbers, the Genius LT will finally brought into Australia in a fairly considerable manner for 2015. This is music to our ears, as we think this bike is a real gravity enduro weapon. With 170mm travel front and rear, the has enough to take on just about any trail. With the Twinloc system dropping the rear travel to just 110mm at the push of a button it’s a very versatile machine.

There are three versions of the LT making their way to Australia, from the incredibly light ‘Tuned’ version which is said to weigh just 12.1kg, through to the all-alloy 720 which we have featured here ($4799). Even the LT 720, kitted out with some fairly weighty parts, comes in at just on 14kg.

All three models feature the newly updated FOX 36 fork, Shimano brakes, stealth dropper posts and some of our favourite tyres on the market, the Schwalbe Hans Dampf. 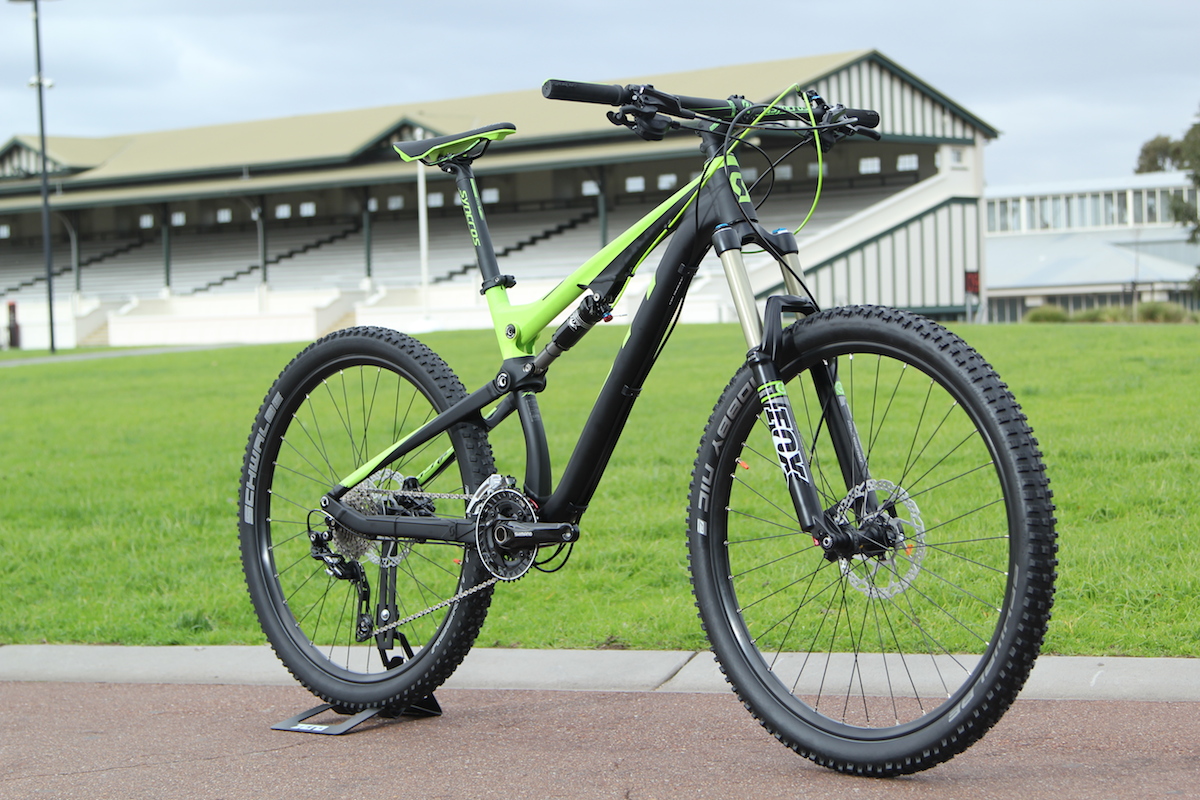 For a number of years now, the Genius has been one of the leading long-travel trail bikes on the market. It doesn’t try to position itself as a really hard-charging bike, but instead focuses on bringing longer travel into the realm of lightweight, all mixed in with geometry that is evenly balanced between climbing and descending.

As with the Spark and Scale, the Genius is available in both 27.5″ and 29″ wheel sizes, with 150mm and 130mm travel respectively, though it’s the 27.5″ bikes grabbing the lion’s share of sales. Again, there are full carbon, full alloy and alloy/carbon mix frames in the line-up too, depending upon the model. Topping the range is Tune series Genius, which is a sickeningly light 10.6kg out of the box, but it’s the 710 and 910 models that we think are the real meat and potatoes of the Genius range, with their reliable XT drivetrain and Rockshox Reverb posts.

Scale series – amongst the lightest on the market

For the racers, the Scale is a hard one to look past, if only for the amazing off-the-shelf weight of some of the models. Again, there are 700 and 900 series bikes ( 27.5/29 ) available at a number of price points.

It’s Nino Schurter’s bike of choice, the Scale 700RC team replica, that grabbed our attention, for obvious reasons. It looks truly amazing, and at 8.6kg it’s crazy light too. Scott actually do offer an even lighter version, with the 700SL claimed to shed another 100g (for just another $2000 ).