Specialized have a history of taking women’s needs seriously. The company’s 2015 range of women’s bikes took up 30% of the floor space at the Australian and New Zealand launch, a firm statement about the variety of bikes on offer for different types of riders.

While some brands offer ladies a modified head tube length, reach and standover in comparison to their men’s line, Specialized bikes sit in–between the men’s sizes.

That is to say that a medium women’s frame has tube measurements that place it in-between a men’s small and medium. A female rider of average height will sit closer to the middle of the recommended height range for a medium frame, rather than at the top end of a small. Imagine that!

With the exception of two entry-level bikes, the women’s mountain bike range is sticking with the 29” wheel size for 2015. The new women’s XC dual suspension weapon, the Era, was the talk of the show. Racy women will consider selling every expensive possession they own for the experiences this high end, and surprisingly versatile bike, offers on the trails. For us, the biggest highlight was the Rumor Evo trail bike because it’s simply so much fun to ride.

We thoroughly enjoyed our time on the 110mm trail bike, the Rumor last year. This year, the range gets extended at the top end with an Evo model, which sees the travel bump up to 120mm and the angles slacken slightly as a result. 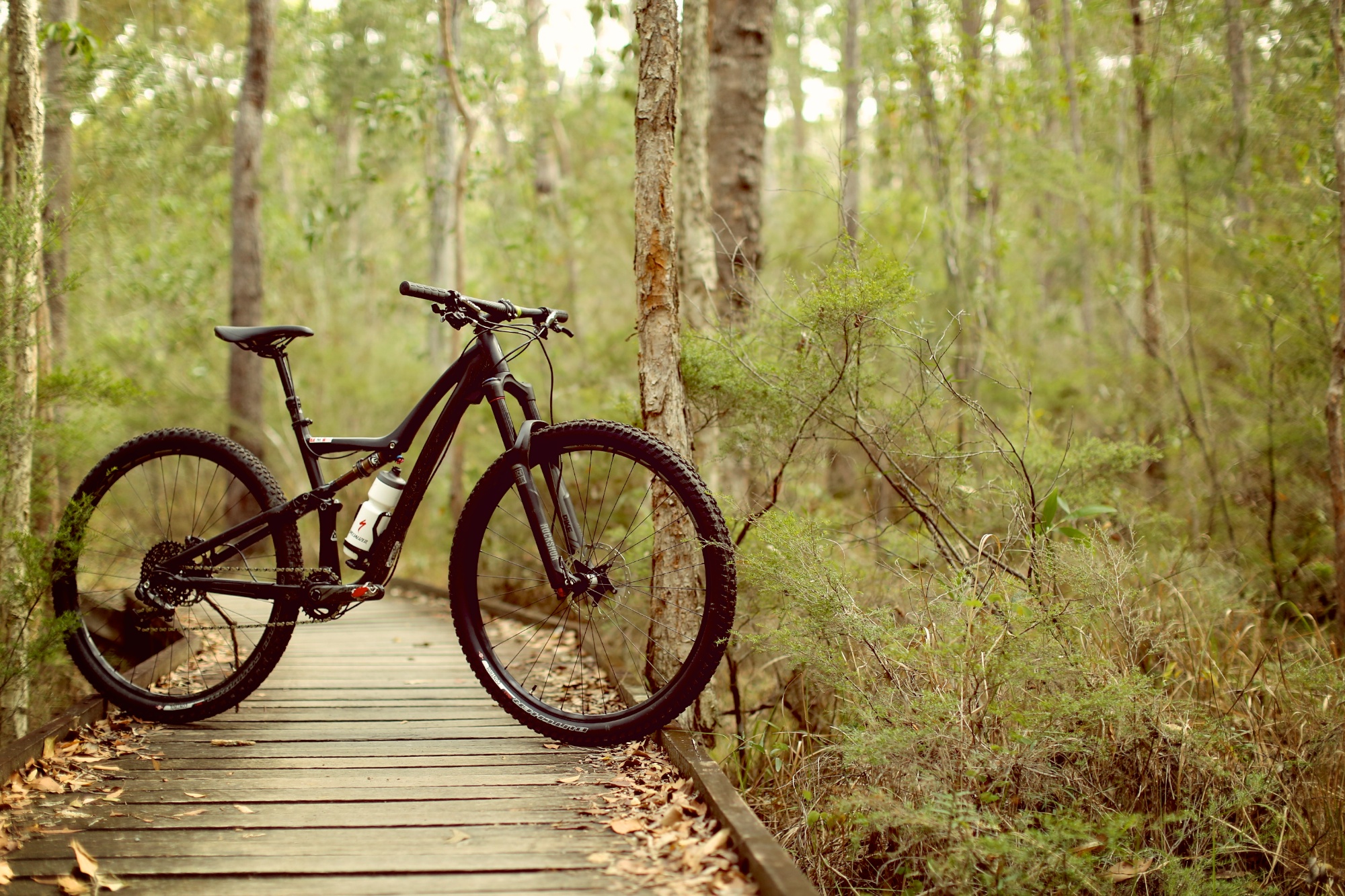 We’ve seen a few women reaching for a small sized Camber Carbon Expert Evo, ourselves included, for the longer travel and more serious spec than the 2014  Rumor range allowed. The Rumor Expert Evo sees similar spec to the Camber Expert Evo, but built around an alloy frame: SRAM X01 and a 120mm RockShox Pike fork being the two parts that draw most attention from prospective owners. It’s great to see Shimano XT brakes make their way onto this bike too. We love the smooth ride feel they offer and they’re well suited to smaller hands.

The low standover of the Rumor frame means riders don’t overstretch the tendons of the inner thigh when getting on and off the bike, something that becomes an issue for shorter statured folk when a bike is raised higher off the ground with 29” wheels.  In comparison to our time on the Camber, we were able to squash our weight down further when riding technical descents, making the bike feel much more responsive and in control. Our centre of gravity felt more balanced allowing us to really play on the bike without having to force our riding position.

The rest of the Rumor range remains at 110mm travel and has a refined spec for 2015. Shimano brakes adorn all but the $2299 base model. The range tops out with a new Elite model coming in at $4,399. This one will run a RockShox Revelation fork, a 2×10 drive train, Shimano SLX brakes, a Command dropper post and also comes in a stealthy black.

There is still no model available in carbon, which is either because engineers are still finding a way to make the frame shape remain strong with this magic material, or because Specialized feel the market isn’t quite there yet. While we’re hanging for the carbon model as much as the next girl, riding the Rumor and a Carbon Camber back-to-back, we’d choose the alloy frame for the performance offered by the more intuitive-feeling fit.

While the Rumor Evo is the bike that grabs our attention for trail riding, the new dual suspension 29er, the Era, is the showstopper. The Era for women is what the Epic is for men: a high performance race bike designed with speed and winning World Championships in mind. In fact, Annika Langvad rode a pre-production Era to her Marathon World Champs victory a month ago causing much internet speculation about this new women’s frame.

Everything about the top of the line S-Works Era takes racing as seriously as the women who will ride it. SRAM XX1 build, light Magura MT8 brakes, RockShox RS1 forks, Roval Control SL carbon wheelset. And with gloss black decals over a matt black finish, it looks the part too. The Era runs 100mm travel at the front (90mm on small models) and 95mm at the back.

Again, the sizing of the Era sits between the men’s sizes and offers lower standover. The carbon layup reflects a lower weight range of the intended users, which, paired with such a blinged out, carbon build, gives the bike a much softer and more compliant ride feel than we expected. In fact, the finished product is so tight and agile, we wouldn’t be surprised to see riders on the small size choose it over the burlier Rumor.

Running the Specialized Brain front and rear and weighing in at a reported 10.1kg for the top of the line model, the Era has all the benefits of a racy hardtail buts lets you be less precise in line choice and take on rougher trails at a higher speed. This adds to the versatility of the bike. It’s one we’d love to do a tough stage race on for sure.

Pointing to the high-performance aims of the Era is a high flying price tag. The Black Beauty you see here will sell for $11,499. The Expert model is $7,199 and the base model is a $4,499, once again reflecting a race-ready build.

The Fate hasn’t changed a whole lot since we tested the 2013 model. It has undergone some welcome refinements in spec, which point to ever evolving parts selection available for a light and nimble hardtail. The suspension remains at 80mm keeping the front end nice and low.

The S-Works Fate gets the SRAM XX1 treatment, a change from the 2×10 SRAM and Shimano drive train it ran last year. A price tag of $8999 points to the zero comprise parts list Specialized use when assembling their top of the line bikes and the cost of extreme dieting.

While nine grand for a hardtail will make some riders open their eyes wider than the Great Australian Bite, you have to hand it to Specialized for continually bringing bikes into the women’s market that sit on a level playing field, in terms of spec, design and fit, with the men’s.

The Expert Carbon Fate is the model that attracted us the most. It’s a more modest build than the S-Works model, for a more modest spend ($4,499). That said, the build is everything most riders need: a carbon wheelset, RockShox SID forks (with the Specialized Brain), a 2×10 chainset, and a beautifully designed and fitting carbon frame. The Comp Carbon Fate will sell for $2,999.

Another new model for 2015 is the Jynx. This bike is the only one in the Specialized women’s range built around 650B wheels. The idea here is that this mid-size wheel is less intimidating for riders who are new to the sport.

The robust looking Jynx is designed for people who want to get out and discover what mountain biking is about. It’s more than capable on singletrack and equally comfortable for explorations on fire roads.

Two new sets of shoes hit Australian shores for 2015. The Cadette will appeal to girls who want something that looks like a running shoe, but offers some of the stability of a cycling shoe. It also gives riders the option of running clipless pedals.

The 2FO Flat Women’s shoe is a bright looking shoe for ladies who like to ride flat pedals. The sole has been carefully developed to offer the right balance of grip and durability. An SPD option isn’t available yet for the ladies, but we’re hoping that’s not the case for long.

Keep an eye on Flow for highlights from the men’s range, including the new 650B Stumpjumper Expert Carbon and S-Works Enduro Carbon.