This is the 29er that had to happen. 2014 was the last year we saw a new 29" dual suspension bike from Giant, and we think it's fair to say the absence has been felt, especially in the world of cross-country racing. And so it's with open arms that we welcome them back to the big-wheeled fold, with a ripping new Anthem, a full-tilt 29er race bike.

While Giant’s 2017 Anthems steered away from the bike’s race focused history (their 2017 model bordered on trail bike territory with a 120mm front end paired with an 110mm rear – read our review here), the 2018 Anthem 29” takes this ever-popular model back to its racing roots. We know a lot of racers who are going to be very excited to see this bike back in its pure, Watt-bombing form.

Apart from the move to 29” wheels, the new Anthem also sports a 100mm front end paired with 90mm of rear suspension. Yep, 90mm out back. Didn’t we tell you this was a dedicated XC weapon?

Where the previous year’s Anthem models focused on versatility and appealing to a wider audience than merely dedicated racers, the 2018 Anthem is an unashamed race bike through and through.The goal for the 2018 Anthem, was speed. Filthy, nasty speed.

“We’re completely unapologetic, we know this isn’t a bike for everyone, this is a purebred cross-country race bike”

So, the bigger wheels are faster now?

Yep. Giant were staunch 27.5″ advocates – indeed, they might have been the industry’s strongest proponents for 27.5 – proclaiming that the handling attributes of a 27.5” wheel outweighed the benefits of a 29” wheel. Maybe this was the case in 2014, but we don’t need to spell it out that 29ers have come a long way in the past three years, across all segments of the mountain bike market. New technologies and approaches to geometry have seen 29ers get their mojo back, and Giant has incorporated these into the new bike.

The new Anthem’s geometry is radically different to its 2013 predecessor, and Giant feel they can now create a bike that takes advantage of the benefits of the big wheels without the handling compromises of previous years.

We’ll spare you the standard longer, lower and slacker diatribe, but the triple threat treatment means the bike feels far less twitchy than a cross-country bike of yesteryear- no more sweaty palms descending aboard a 29” cross-country bike with a 72-degree head angle! Full geometry is below. 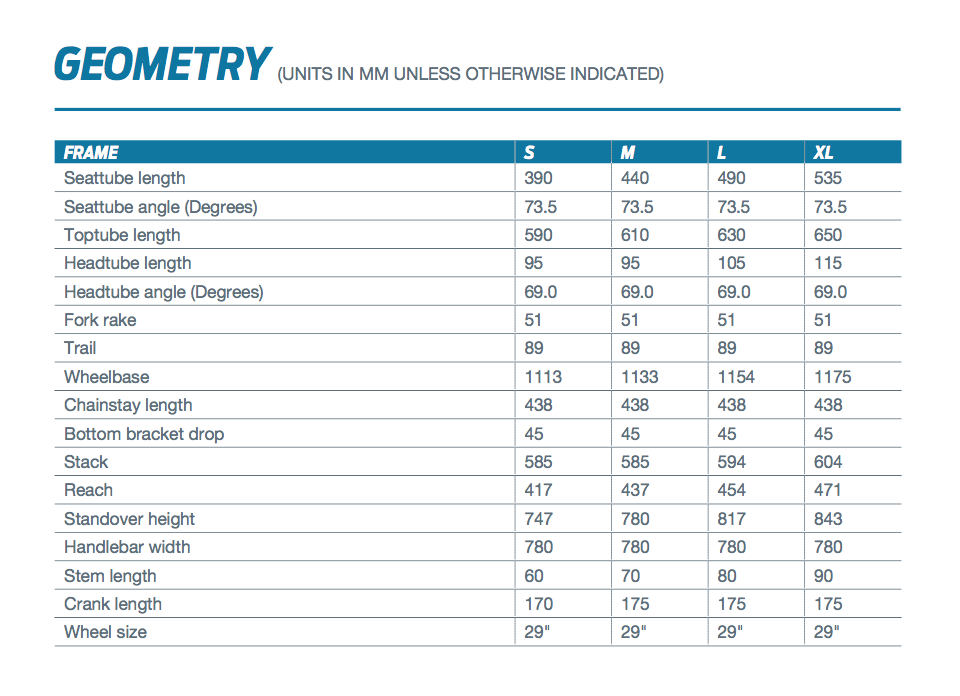 One area of geometry that drastically effects the Anthem’s handling is the shorter rear end. During the prototyping phase, long-time Giant athletes Carl Decker and Adam Craig wanted the bike to be easier to flick around on the trail and pop onto one wheel for getting over obstacles.

The number they settled on, which they were able to achieve through the new standards of 1x drivetrains (the aluminium model features a brazed-on front derailleur mount for nostalgic purposes), Boost spacing and metric shocks, was 438mm. That a full 24mm shorter than the previous Anthem 29er! That number felt pretty spot on to us, providing the right mix of making the bike’s handling livelier than its boat-esque predecessor while keeping the bike’s wheelbase in check for its intended use (1133mm for a size medium). 438mm is a sensible length – we’ve often noted that going too short on a XC bike can make it harder to keep the front end from lifting and can detract from the overall stability.

What about the suspension- why 90mm of rear travel?

90mm of travel definitely feels like a pretty hardcore approach – we can’t think of many bikes in recent years emerging with less than 100mm out back. Giant’s rationale for the abbreviated travel isn’t just about positioning this bike as a race weapon, it’s also because they feel that 90mm of premium quality travel is better than 100mm with compromises.

Less can be more. Explain, please!

When Giant first set about reincarnating the Anthem 29”, they tested several 29” dual-suspension cross-country bikes already on the market, all of which had 100mm of rear travel. What they found was that due to the short shock strokes, low air volumes and high leverage ratios generally used on these bikes, the shock’s air pressure had to be run quite high, which lead to suspension performance compromises.

With high suspension leverage ratios and the associated high shock pressures often found on XC race bikes, it was often difficult to obtain full travel. And often, to get full travel, they ended up having to run too much sag and lose mid-stroke support. Finally, high shock pressures can result in less usable rebound tuning range – it’s something we’ve seen often, too much pressure leads to you having just a couple of clicks of truly relevant rebound adjustment, with the rest being largely superfluous.

So, how does the Anthem’s 90mm shock solve these problems?

What Giant found after trialling a couple of 100mm prototypes was that moving to 90mm travel with a lower leverage ratio, and using a shock with a higher air volume and a longer stroke length, allowed for lower air pressures to be used.

Pushing through all the tech talk, lower air pressures let Giant obtain better shock sensitivity, more mid-stroke support, more rebound control, and the usability of the full travel range without blowing through and bottoming out.

The mid stroke support gives you a better riding position, as regardless of whether you’re in or out of the saddle there’s minimal bobbing and good traction. Cutting to the chase- we were very impressed by the Anthem’s rear travel. It’s not the brutal, and super firm feel we anticipated when we first heard it had 90mm of travel, but rather it’s quality, and it’s effective.

How did the rest of the bike go out on the trail?

Fast. We were aboard the top of the line Anthem 29 Advanced Pro 0 for the bike’s launch, a bike featuring nothing but the best components available, and the bike didn’t disappoint.

Our testing took place in Southern California at Giant USA’s headquarters, on perfect testing grounds for the bike of predominantly smooth and fast singletrack, although the treacherous loose over hardpack surface kept us on our toes! Due to the trails’ slippery surface, many of the climbs were best tackled in the saddle, where the bike’s seated traction was impressive. It felt precise and easy to manage on the switchback climbs too, whipping through nicely with the shorter rear end. 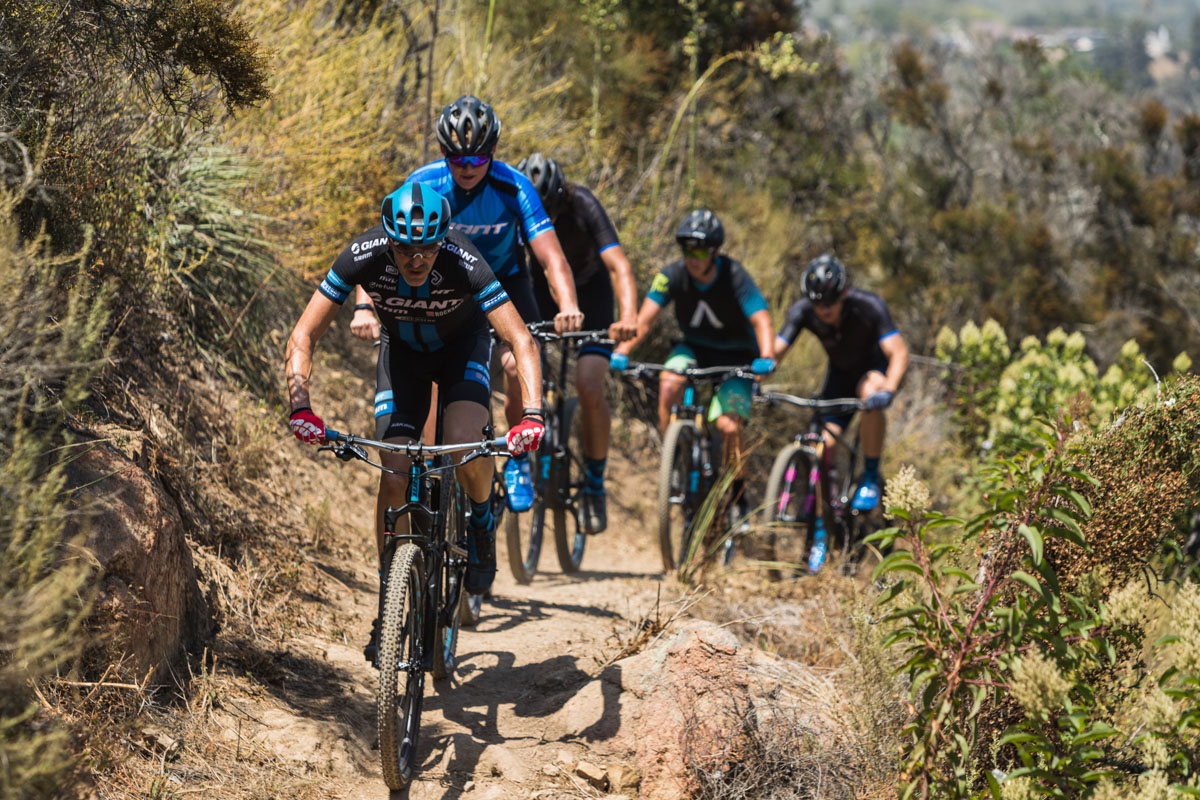 Opening up the speed a bit more on wide open fire trails, punchy ascents and undulating singletrack, the Anthem came into its own. The impressively light overall weight (9.98kg without pedals for a medium) was backed up by predictable traction, and the bike’s geometry encourages you to go for it.

With the suspension’s excellent sensitivity, out of the saddle efforts over choppy surfaces resulted in far less skipping of the rear wheel than we’ve experienced in the past, meaning more of our power was delivered to the ground, even on the seriously loose trail surface.

The shock uses a remote lockout – it’s a two-stage system, with the compression either open or locked. Racers will love it, though we’d like to have seen a middle setting here – something similar to Scott’s Twinloc system would be very useful. With the bike locked out, the super firm compression setting tended to see the rear wheel skipping. And with the bike fully open, the compression sometimes felt a little more wallowy than we would’ve liked if we were racing and every second was on the line.. Something in the middle would have been ideal.

This is a minor complaint, and perhaps setting the bike up with a touch less sag (Giant recommend between 20-25%, and we were using the latter measurement for our testing) would allow you to run the bike fully open all the time whilst retaining as much efficiency as possible, saving the lockout for only full blown sprints.

What about the descents?

As mentioned above, the new Anthem features the standard longer, lower, slacker treatment that barely rates a mention when a new bike is released these days.

Key measurements like a 69-degree head angle, 73.5-degree seat tube angle and a 610mm top tube in a size medium mean the Anthem’s handling on the descents is far less twitchy than in years past. Combined with the more pliable rear end, the Anthem is a surefooted descender for a cross-country race bike, however, we think a dropper post would’ve been a welcome addition.

Nope. And with a 27.2mm seat post, there aren’t too many options to fit one. This is another nod to the Anthem 29’s intentions as a dedicated XC race bike, however, there are provisions for an internally mounted dropper. As a side note, Giant’s Senior Global Marketing Manager had a dropper on his Anthem, and he was flying down the descents!

Giant also justify the decision as the 27.2mm seatpost provides additional compliance when smashing along in the saddle, and by running a rigid post there are the obvious weight savings over a dropper. Still, as comfortable as the bike is when powering in the saddle, we’d be looking to install some kind of dropper – even if it were just a short-travel XC-specific offering.

Any other neat touches?

We’re big fans of the Kabolt axles front and rear on the Anthem, that both shave weight and give the bikes a clean look. The skeletal, one-piece carbon Maestro link is also svelte looking piece of kit, as is the hidden seat post binder – schmicko.

Something that’s often overlooked on cross-country bikes is that an 180mm front rotor provides quality stopping power- we’re glad Giant chose to sacrifice a bit of weight over speccing a 160mm offering.

Lastly, the cabling of the bike rates a mention. Giant have always done a superb job, but the way they’ve kept it all smooth and rub-free is nicely done. The dual lockout lever is clean and ergonomic, and the rear lockout comes out neatly just underneath the bottle cage, very unobtrusive.

Right, how many Anthem models will we see in Australia, and for how many dollars?

The 2018 Anthem models that will be coming into Australia, as well as their prices, have not been confirmed, but watch this space!