A bike that we’ve long had a great affinity for over the years receives a major re-working for the new season; we’re talking huge weight savings, wheel size simplification and of course, modernising of the geometry. The Genius lives up to its name, a very clever bike indeed.

Following on from the drastic changes to the featherweight Scott Spark last year, it was no surprise to see the new Genius has adopted many of the design and construction methods into the longer travel platform to achieve a ridiculously low frame weight of 2249g with shock and hardware. In true Scott fashion, the new frame is leading the 150mm travel trail bike category on the scales; we’re very impressed. 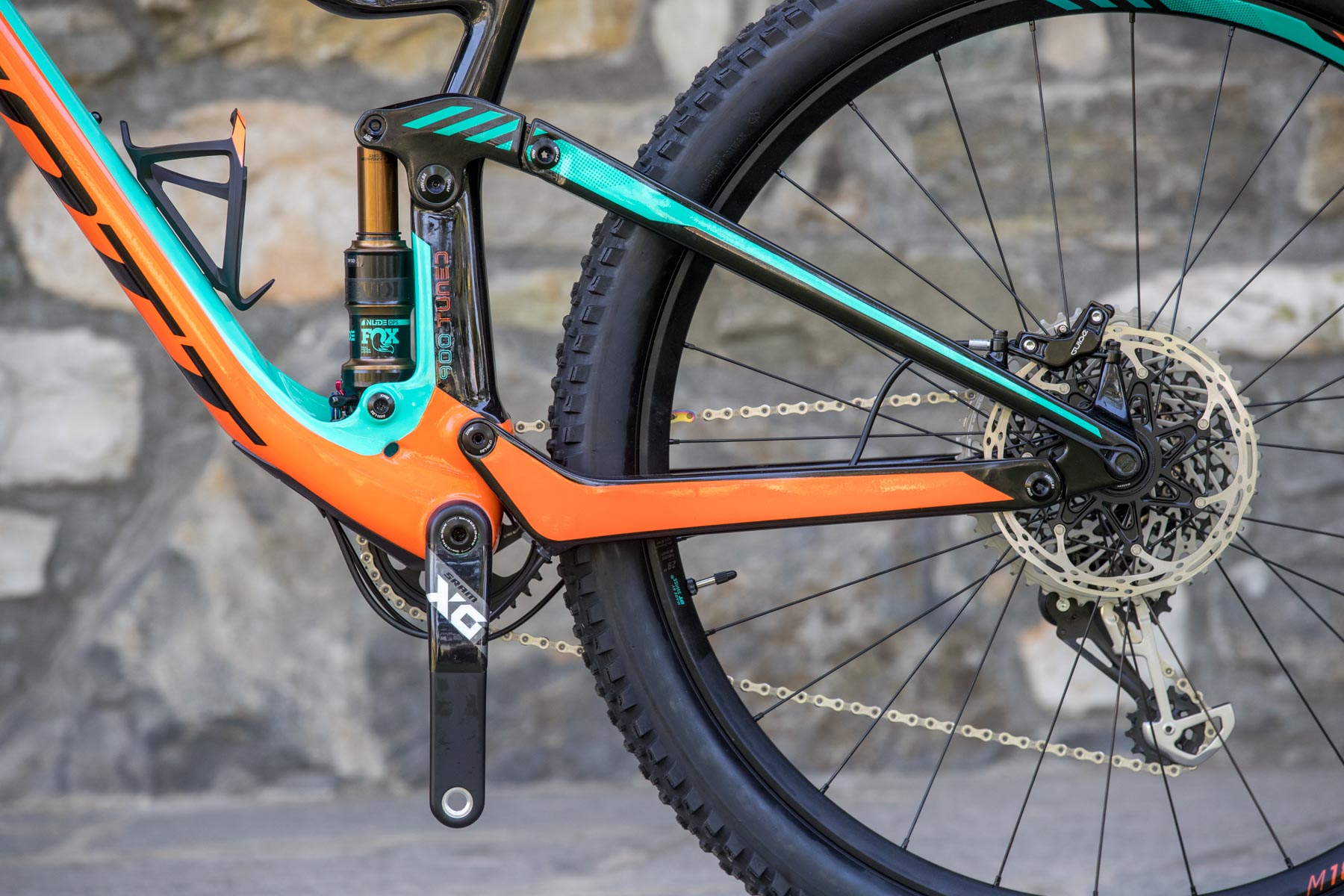 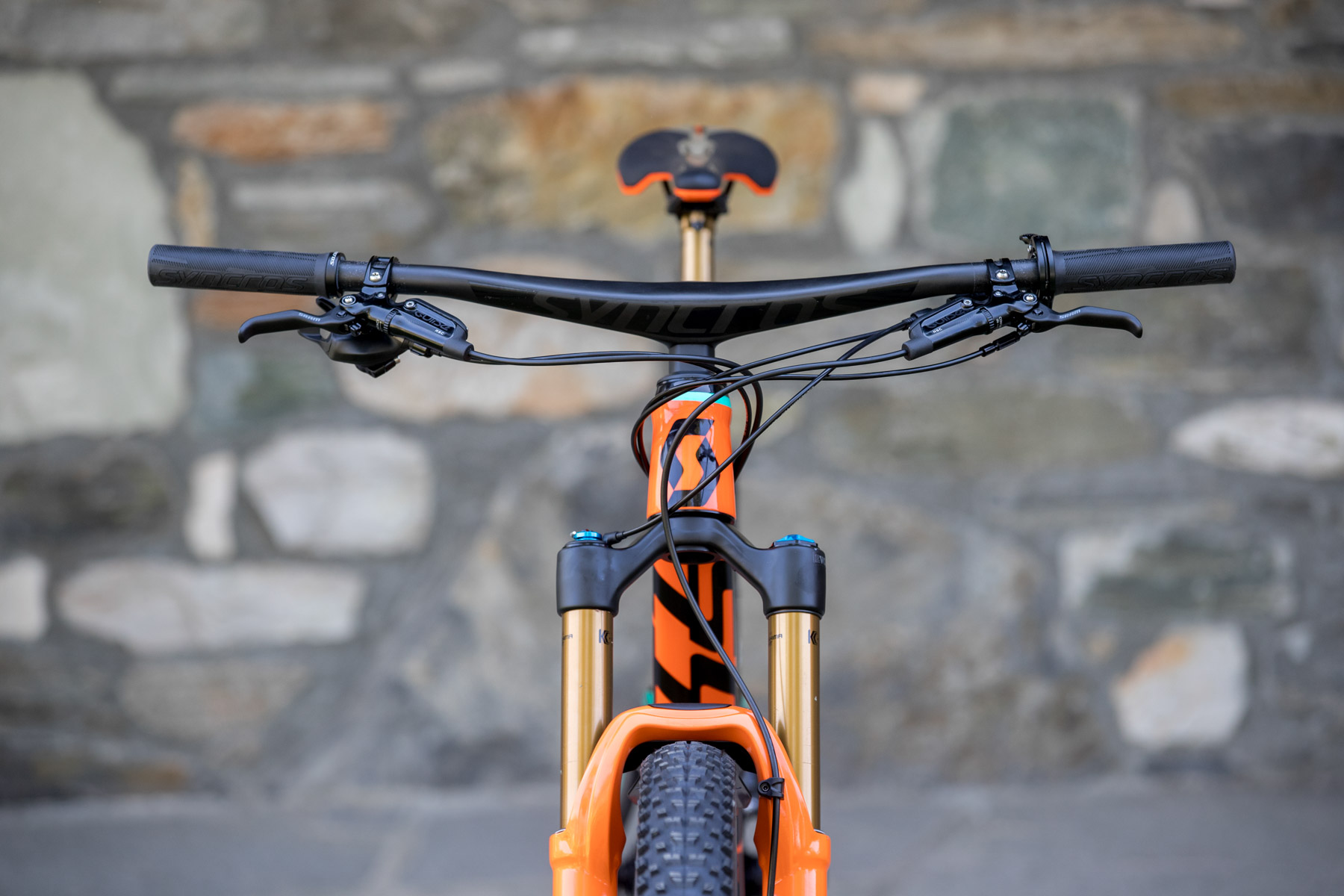 So, in a carbon nutshell what is new?

One frame, two wheel sizes, and for many reasons.

The new Genius has been designed to accept 27.5” and 29” using one frame, changing wheel diameters will only requiring a flipping of the geometry chip on the upper shock mount to change bottom bracket height. Scott are confident that without the need to change parts like the headset and forks, the bike can ride in a manner that they are happy with. This means less models to manufacture, and in the end the pricing will reflect at dealer level, that is always a plus (ha, get it…).

Don’t call a Genius a ‘plus’ no more.

Well, sort of, plus it is still there, but in an effort to simplify the enormous Scott range there will be with fewer models in the catalogue. All the 27.5” Genius bikes will have 2.8” tyres (plus, pretty much) and not called ‘plus’ bikes as such. We’d be happy if the rest of the industry followed suit on this move, tyres are tyres, bigger tyres are bigger tyres, that should do it.

The new Maxxis 2.8” Rekon tyres are the rubber of choice for the Genius, and when compared to the Maxxis 2.5” Minion WT tyre, there is an only 1mm difference in the width between them, though the 2.8″ does appear to have the larger volume. Like what we have seen with the release of the new Pivot Mach 5.5, we predict the era of plus tyres bikes to shrink in size and find the sweet spot, and 2.6″ on 30-35mm wide rims seems to provide enough air volume and tread patch without too much bounce and roll from being too huge. Traction is a good thing, but not with a sacrifice of weight, speed and the ability to blast into a berm without the tyre blowing off. We like this.

Put the new Genius and the cross country oriented Scott Spark side by side and you’ll see a strong resemblance, the tiny carbon linkage drives the new trunnion mount rear shock down toward the bottom bracket region, this frees the top tube to become much lighter without having to bear the load of the shock. Also, the whole bottom bracket area needs to be strong to manage all the forces that go into the bottom bracket and crank region, so to combine it with the rear shock it’s a no-brainer.

While the 100/120mm travel Spark uses a one-piece rear end and a flex-stay arrangement, the Genius uses 150mm of goodness so a flex pivot arrangement wasn’t achievable and they’ve opted for a lightweight bushing in place of a cartridge bearing on the chainstay. Bushings are so 1995, but we’re totally going to trust the engineers on this one, as this pivot has only a small jog to do, and a bushing can do it.

Taking advantage of the expired patent surrounding the Horst Link that Specialized held for many years, the Genius shifts the suspension pivot from the seat stay to the chain stay.

TwinLoc, the remote lever that simultaneously adjusts the front and rear suspension.

Nothing new here, Scott’s tried and tested Twinloc lets you toggle between open, traction and locked mode. In open mode you have all the 150mm of travel out the back, traction mode closes part of the FOX Nude rear shock’s air chamber limiting it to 110mm of travel with a much more progressive feel, and then the climb mode is locked out completely.

The three modes also have an effect on the fork, adding compression and locking it out to match the rear. It’s a great system, and so very easy to activate.

The moment we set eyes on the thing, it was the one-piece Syncros cockpit that had our attention. Scott’s in-house parts and accessories brand – Syncros – have come up with a crazy new one-piece bar and stem called the Hixon iC. With a virtual stem length of 50mm and 760mm wide, it weighs only 290g. It’s not eh first-time Syncros have done such a thing, the Scott Foil aero road bike also uses a one-piece cockpit.

While we would usually expect a 150mm travel bike to be fitted with a 780mm handlebar, we typically would trim to 760mm anyhow. There is a 780mm bar in the pipeline, perhaps a feature on a longer travel Genius LT to be released next year.

Getting dirty, how does it ride? Oh yes, and ride we did.

Sticking to its heritage as a bike born in the Alps of Europe, the Genius is the all-day trail bike personified. It is super-light, efficient to climb, and for want of a better description, not too big or not too small. 150mm travel at both ends may seem like a lot, and it does feel super plush when you jump on, but with a flick of the Twinloc lever, the bike can be quickly adapted. While we are a long way down under from the snow-capped craggy peaks of the Alps where cows roam the fields and trails are often hundreds of years old, the adage of ‘earning your turns’, or simply climbing long roads to bomb back down gnarly singletrack translates anywhere in the world.

Scott have always put a lot of emphasis on creating bikes that climb well, hence the Twinloc and frame geometry that remains sensible and practical, rather than going for the buzz-word trends like; short chain stays, massive top tubes and slack head angles the Genius plays it fairly safe with numbers, and that is its key to the balance. Scott were keen to stress te point that the new Genius is not an enduro race bike, rather a trail bike with a wide range of versatility. We can only bet a Genius LT using the new frame configuration will be up for renewal next year

Talking frame geometry the new Genius is far longer in reach, slacker in the head angle and steeper in the seat angle. We’re happy to see the chain stays shorten too, down from 445 to 436mm, a big difference and gripe we had with the Genius we reviewed recently. 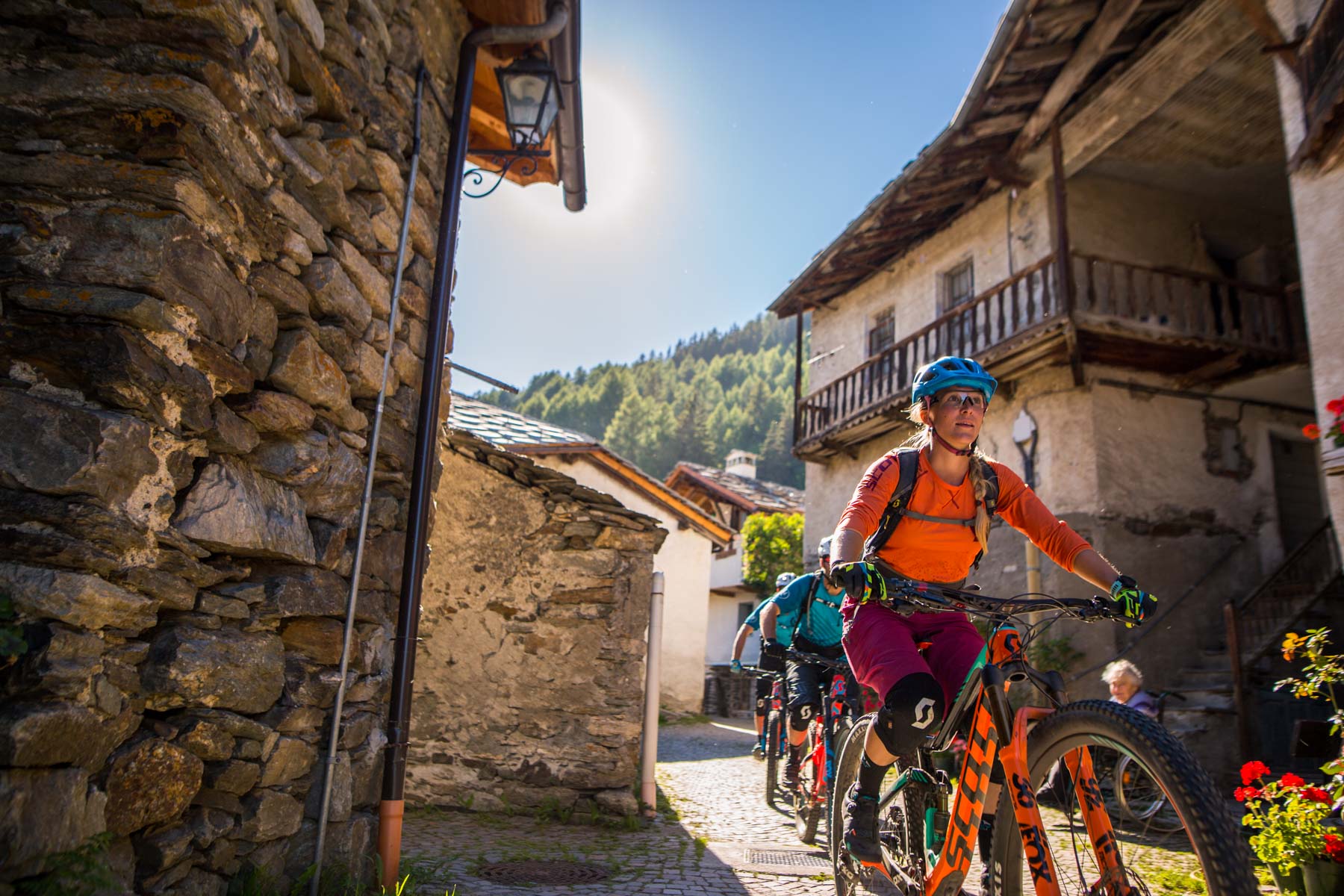 It was only very recently that we reviewed the outgoing 2017 model Genius Plus 700 Tuned, so it was very fresh in our minds how that bike performed. In comparison, the new model feels to have made improvements in key areas, especially the suspension curve, now with a very nice and supple feeling off the top of the stroke. The geometry tweaks make the bike more nimble in the turns, easier to manual and jump through tight landings. With the suspension, pivot moved from the seat stay to the chain stay the bike feels more planted under brakes and very supportive beneath you when pumping through the trails, and resists pedal strikes well.

We rode both, after two long days of riding a huge variety of trails on the 27.5″ wheels with 2.8″ tyres we changed to the 29″ wheels and got back to it. The trails in Aosta Valley were ideal to gain a great understanding of what wheel size suits best, with nail-bitingly fast straights, rough embedded rock gardens all joined with the tightest switchback corners we’d ever seen. That’s Europe for you!

It was the 29er variation that we stuck with, the stability in traction won us over, though it was certainly a tougher task to ride the tight switchback turns, even resulting in one over the bars incident while attempting a nose-pivot turn at speed. Scott give you the option to choose what wheel size you want, offering many models.

How were all the parts?

The bike we rode was the Genius 700 Ultimate, a bike that will be available in Australia as a special order only as it’s going to hit a price point that would make you weak at the knees, a top-spec model with nothing shy of the ultimate parts. A SRAM XX1 Eagle drivetrain with its lustrous gold finish, FOX 34 forks (the 700 and 900 Tuned Genius models come with a FOX 36), DT-Swiss 30mm wide carbon wheels and a very slick black/black paint job.

Our only gripes were that on the steep, dry and loose trails of Aosta, we wished for a more aggressive front tyre, though we’re sure that on our home trails we’d have no qualms with the fast and light Maxxis Rekon, and the SRAM Guide brakes even with 180mm rotors at both ends didn’t particularly like the insanely flat-out descents into hairpin corners, though like the tyres we would surely be happy with the power of the Guide brakes on our regular trails.

Give me more Genius!

Following the might impressive launch of the Spark last year, the release of the new Genius will solidify its place in the long-travel trail bike segment. If your rides involve a blend of exploring new places, climbing to the top on your own steam, descending hard and fast, then from our early impressions, we will back this bike with full confidence.

We’ll be back with more from the 2018 Scott range with pricing and availability, stay tuned.