When it comes to slowing your bike and body from massive velocities, who better to trust than the Germans?

Brake Force One (BFO) are a small, high-end manufacturer of disc brakes. How high-end? Well, it’ll set you back around $1300 for a complete set by the time you’ve paid for adaptors and rotors. It’s a hard pill to swallow, especially when you consider how good Shimano’s SLX (and even Deore) brakes have become, and they cost around a quarter as much.

But before we all scoff at the price, it’s worth noting that these aren’t your average brakes, either in terms of sheer braking power or the engineering involved in their unique operation.

An initial squeeze of the short, one-finger-specific, rubber-coated brake lever reveals a ‘squishy’ feel, the kind we’d normally associate with a poorly bled brake. In fact, the lever feel is actually a product of the system’s ‘hydraulic brake booster’ design. As you pull the lever, you can feel when the pads make contact with the rotor, but as you keep pulling, a second stage piston engages, compressing the fluid with even greater force.

This is where the brakes get their exceptional power from. In a normal brake, the braking force is directly correlated to how hard you yank on the brake lever. With the BFO stoppers, the force required to pull the lever deeper into their stroke is fairly linear. But the further you pull the lever, the power continues to ramp up, and up, and up. In terms of operation feel, the closest system we can think of is the brakes in your car.

Persistently wet weather meant we never got the chance to really test these brakes in dry conditions, but this did reveal how quiet and powerful the Brake Force Ones remained in the mud, whereas some other brake systems go into rapid decline. The wet, gritty conditions highlighted another nice design aspect, that being the large clearance between the pads and rotor. Even in the slop, there was hardly any brake drag or that horrible sound of sand being scrapped between pad and rotor. 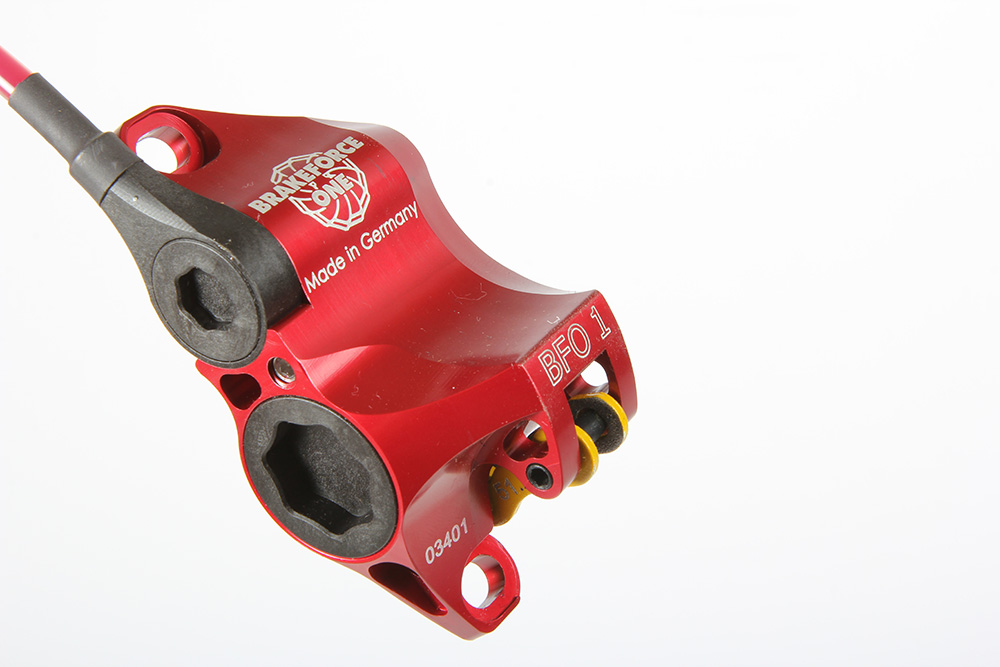 Most modern brakes operate with an open system (fluid sits in a reservoir in the brake lever allowing for expansion/contraction of the fluid as operating temps increase), but the BFOs use a closed system. In the bad old days this would’ve meant problems with fluid expansion causing inconsistent lever feel. During our testing we experienced none of that, but we weren’t riding the Alps either. That said, we trawled the net looking for reports of BFOs getting pumped up, but found no such bad press. The closed system does allow you to quickly adjust the lever contact point – twiddling the dial on the front of the lever makes for a longer or shorter lever throw before brake engagement.

Weight wise, the BFOs tout some impressive figures, At just 187g for the front brake (plus rotor and adaptor), they’re lighter than Shimano’s XTR Race offerings. The composite lever construction undoubtedly helps keep the weight low, but we do think it looks and feels out of place on such a boutique product – we’d like $1300 worth of brakes to look like $1300 worth of brakes! Conversely, the callipers do look bloody great, huge chunks of lustrous CNC machined goodness. The brake pads they house are also used by Magura, so getting spares won’t be an issue.

With so many great, highly affordable brakes on the market, do the BFOs really offer enough to justify their price? Not for the average rider, no.

But these aren’t meant for the average rider. They’re aimed at the mountain biker who wants something unique, something built without compromise. What the BFOs do offer is performance that actually matches the marketing hype. So often, at the super high-end of the market like this, products just under perform terribly, sacrificing reliability in the name of weight or aesthetics. The BFOs do not disappoint, offering good performance, albeit at a massive cost.