Light, fun, responsive and Aussie made.

It takes a brave person to launch an Australian-made bike brand. In a sport where the big manufacturers are so dominant and most consumers are price driven, some would say it’s an impossible task. But Sebastien and Gisella Deubel ARE brave, and the bike they’ve produced is sensational fun.[private]

The Deubel 2UP is an entirely Australian-made frame. Designed, welded, painted, assembled in Sydney. It’s also a very unique bike, not perhaps in terms of its suspension configuration (which is a simple-as-it-gets single pivot) but in terms of its versatility.
The 2UP is a real chameleon; interchangeable dropouts and shock mounts allow you to adapt the bike quickly and easily to change it from a trail bike to an all-mountain shredder. And now the Deubel team have expanded the bike’s capabilities once again. With the addition of new 150x12m dropouts and revised forward shock mounts, the 2UP can now be transformed into a 180mm-travel downhill/freeride weapon. 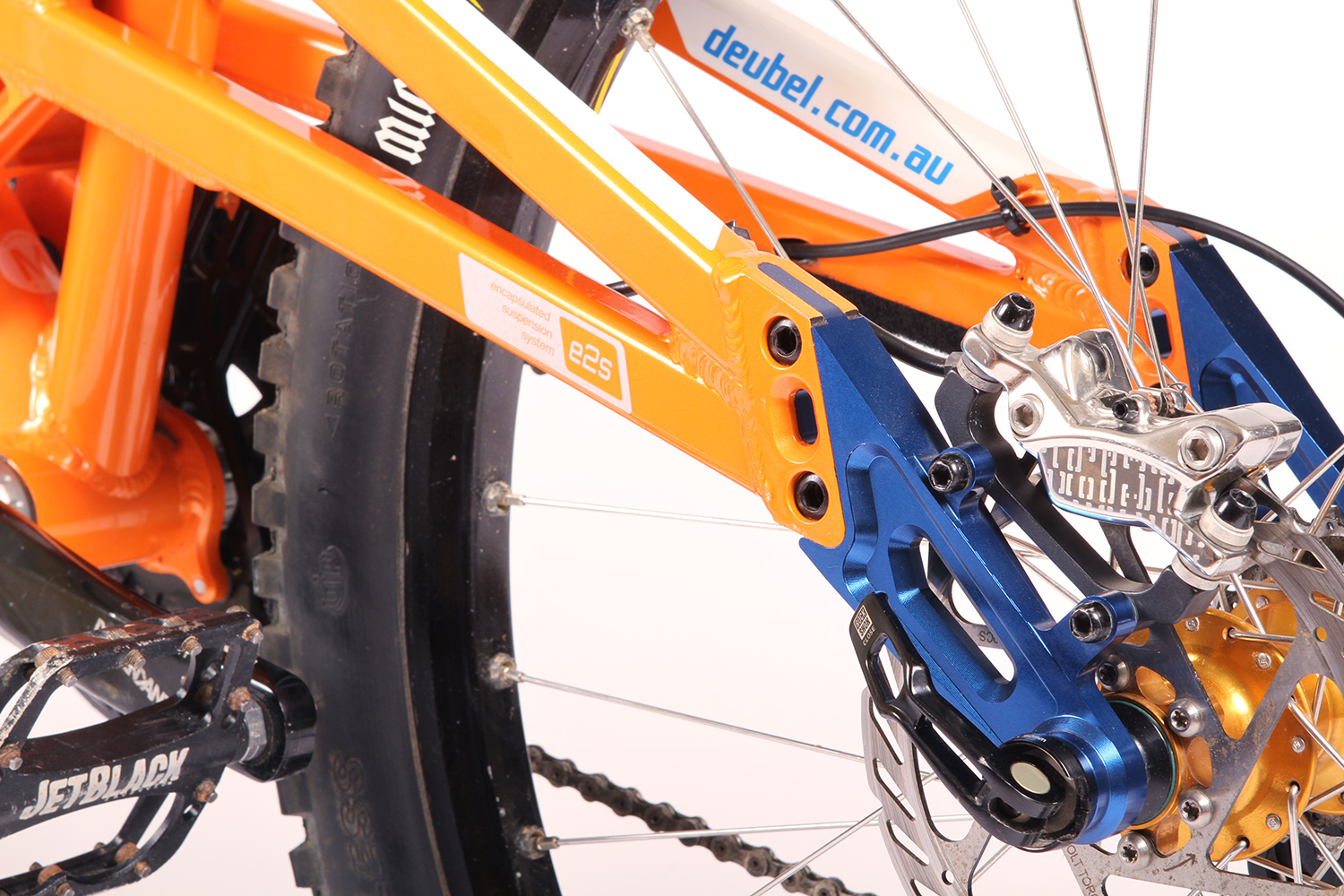 We’ve ridden the Deubel 2UP in its trail bike guise before and loved its playful geometry and simple, remarkably effective suspension. So when the chance to give it a whirl in a longer-travel, slacker configuration came about, we jumped at it.
While the 180mm-travel 2UP is still officially a prototype, it has been making a name for itself on the Australia National and NSW State DH circuits for some time now underneath up and coming junior, David Maggs. It’s often said that Australian downhill courses favour a lighter, shorter-travel bike and the results the 2UP has been clocking up seem to back up this assertion.
To achieve the transformation to downhill bike, the frame’s designer Sebastien Deubel created dedicated downhill dropouts which give the bike a 440mm chain stay and use a 150x12mm axle spacing. He also modified the interchangeable forward shock mount to facilitate the use of a 2.5″ stroke Fox DHX Air 5.0 shock and to slacken the head angle out to a more downhill friendly 65 degrees.

180mm-travel, 440mm chain stay, 65 degree head angle (with a Fox 36 180mm fork); these numbers definitely aren’t what we’ve become accustomed to lately from full-blown downhill bikes, most of which are running a 63 degree or slacker head angle. But does Australian terrain really demand a bike with a World Cup slack geometry? The proof of the pudding, as they say, is in the eating.

Our test bike was actually David Maggs personal race machine, but we were encouraged to fettle, so we did, dropping the fork pressures to accommodate riders who aren’t hitting everything at warp speed.
Setting up the rear suspension, we noted the classic feel of a long travel air shock – it seems firm at the top of the stroke, then happily uses its mid-stroke before ramping up to avoid bottom out. We were surprised to find that we couldn’t slow the rear shock rebound speed down, it was already at its slowest setting. We’d definitely be sending this shock in to get the rebound damping range tuned to allow more adjustment.
To put this bike through its paces, we headed to Sydney’s Oxford Falls where there’s a great concentration of short downhill and freeride tracks. It was the perfect terrain for the 2UP.

It was no surprise that the 2UP in this longer, slacker configuration shared many of the same ride characteristics as found in its 150mm-travel setting. In short, it’s playful, precise and there’s nothing excessive or vague about its feel on the trail. We took all of about 30 seconds to feel right at home.
The single pivot suspension just loves being loaded up and flung off jumps. It lands superbly too, just lightly getting full travel without any harsh bottom outs. You’ll need to pick where you put down the power though, as the 2UP doesn’t like being pedalled over choppy terrain.
While the frame isn’t as burly through the rear end as some other true downhill bikes, it’s not overly flexy either. In our mind, there’s just enough lateral flex in it to make for a comfortable, whippy kind of ride, giving it a lively feel. The ride is dead quiet too, thanks to the elevated chain stay.

As it stands, set up with a long travel single crown fork and an air shock, the Deubel weighs in at 15.8kg. This is pretty darn light (though bikes like Trek’s Session 9.9 aren’t too far off), and the feeling that you can pop off every little lip and put the bike where you want it encourages you to skim over the trails and ride the bike more, rather than being a passenger. This style won’t be faster in every situation, but it’s a damn sight more engaging and fun than simply ploughing on through.
For the kinds of trails that most of us shuttle on the weekend, and for a large portion of Australian downhill tracks, the Deubel 2UP in a 180mm configuration is ideal. It’s everything you need, and nothing you don’t.
MO’ FLOW PLEASE!
It appears you're using an old version of Internet Explorer which is no longer supported, for safer and optimum browsing experience please upgrade your browser.