Giant has just re-birthed their much loved Reign and it’s a meaner beast than ever, a genetically enhanced freak of all-mountain awesomeness; 160mm-travel, 27.5″ wheels and carbon construction. It also looks good, with maybe the best graphics of any Giant mountain bike to date.
But what does it ride like? That’s the big question. As an executive summary – it’s really good.
At the recent 2015 launch of the Reign (and Glory) Flow got to spend a couple of days on the trails of Pemberton, Canada. It proved a great testing ground to develop some initial thoughts on the performance of the bike. Riding for two days isn’t long enough to a really get a good feel, but it is just long enough to get a taste of wanting more. And more we want.
[divider]The Bike[/divider] 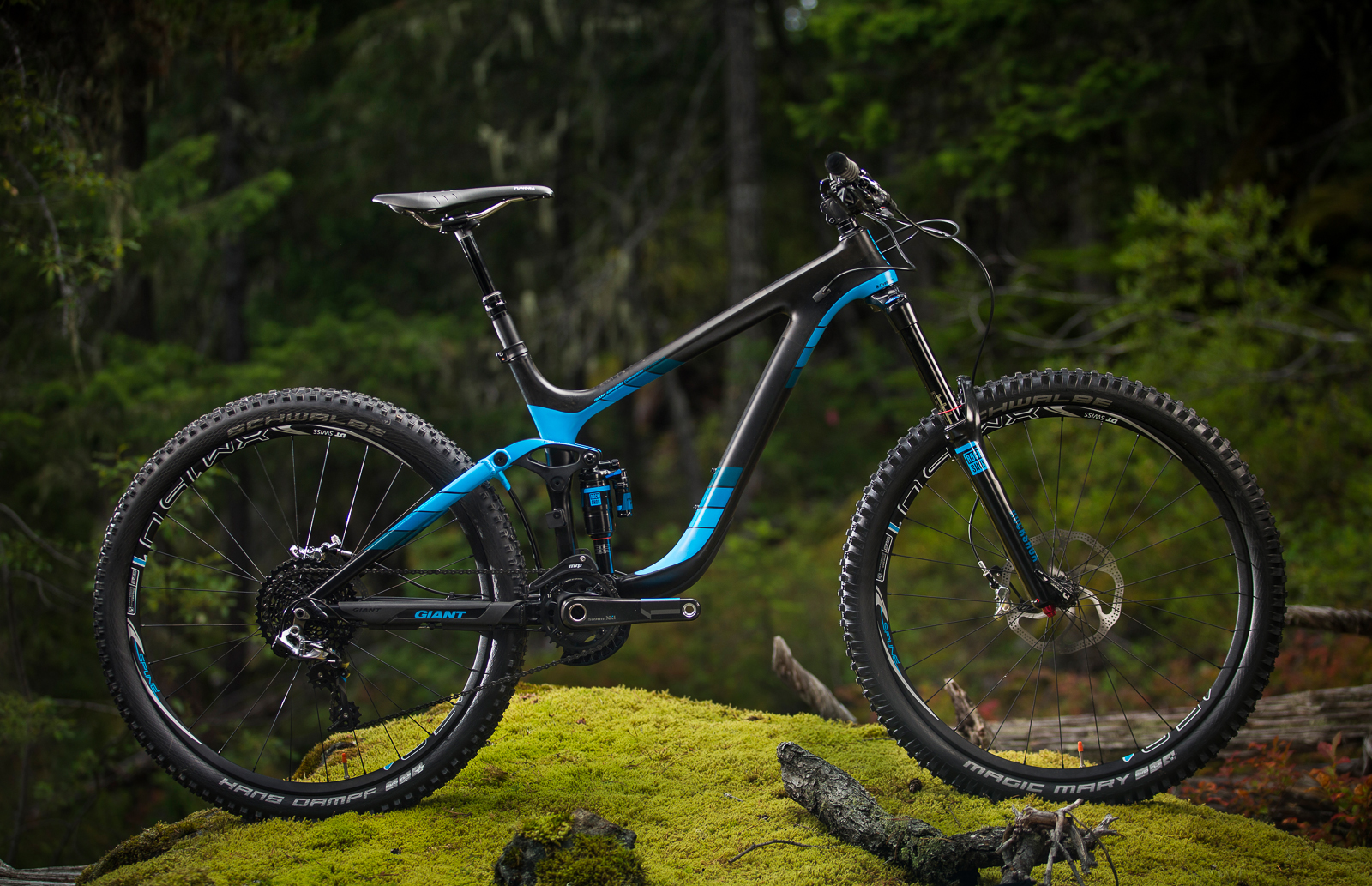 With the rise and rise of Enduro racing, long travel, slack angles, and aggressive geometry are the flavour of the year; with angles more akin to downhill rigs of yesteryear, you could easily excuse yourself for thinking that everything old is indeed new again. However what this new breed of aggressive bikes have when compared to their downhill ancestors is ride-ability, and more importantly, usability.
The Giant is no exception to that rule. With a 65 degree head angle and 160mm of travel it could be considered more suited to downhill shuttles than trail riding however we found the bike handled lengthy rides and all-mountain adventures with ease. We got to prove that very fact with one epic heli-drop adventure up, down and around the massive peaks of Pemberton.
At the core of the new Reign is an all-new frame and highly revised geometry. Longer, lower, slacker and shorter in the rear end is a quick summary of the new bike and the numbers add up to something that really is designed to go downhill. Even though the Reign now comes with larger wheels it’s shorter in the chainstays the the previous 26″ version, which makes it easier to move around corners and lift the now longer front end. That roomier cockpit and longer front-end can make any bike a slug to handle on flatter corners and Giant has attempted to alleviate this with a custom 46mm offset Pike. We actually found less “push” on the flatter turns than we expected.
The suspension design is the ever effective Maestro set up and Giant don’t look to be changing that platform any time soon. Adding to the performance of the system is the incorporation of a bearing on the upper shock mount which Giant says benefits small bump performance.
A big change, and it’s across the whole range, is the loss of Overdrive 2. Once marketed to us as the best-thing-since-sliced-bread to increase front end stiffness, it’s now gone.  Maybe it was true and the benefits where real, but the industry didn’t follow and Giant was left without a lot of choice given the absence of after market stems to suit the size.
The last point we’d like to mention is the aesthetics. The bike looks REALLY good. It has large, bold tubes and graphics, and really neat and functional internal cable routing. We just wish the prettiness of the cable routing was backed up by an absence of cable rattle, but unfortunately this isn’t the case (nothing that a piece of foam won’t fix thought!)


[divider]The Build[/divider]
Of course we were thrown the top of the range model! At such a high price point you’d expect some quality spec, and the Reign Advanced 0 Team won’t let you down. Suspension is taken care of by Rock Shox (no FOX out back, which is a surprise) with a custom 46mmm offset 160mm Pike handing the front end, and a Monarch Plus out back. Both performed really well during our riding and only after a 10km rocky and rough downhill on a hot day did we notice the rear shock starting to heat up and speed up a fraction.
The 50mm stem and 780mm bar combo was great and even though that bar length is a little wider than we normal run it was easy to get used to.  It is great to see a bike pretty much set-up how we’d run it, right out of the box. The only thing we didn’t like about the cockpit was the grips. We’ve never liked them, but that’s personal preference.
SRAM goodness takes care of all the shifting and we’ve written at length about how well the XX1 set-up works. No issues and great performance were experienced from the XX1 gear, but you wouldn’t expect any after only two days. The Reign does have a direct mount port for a front derailleur if you’re so inclined, but we’d love to have seen Giant ditch it as an option all together for supremely clean lines.
Our test bike had two differences from the OEM spec: the tyres and the brakes. The Giant Advanced 0 Team will come with the Schwable combo of Hans Dampf out back and Magic Mary front and from our experience they will be great. Our bikes also had Avid Codes but the final spec will be the new Guide brakes which we’re yet to experience and so can’t comment on their performance. 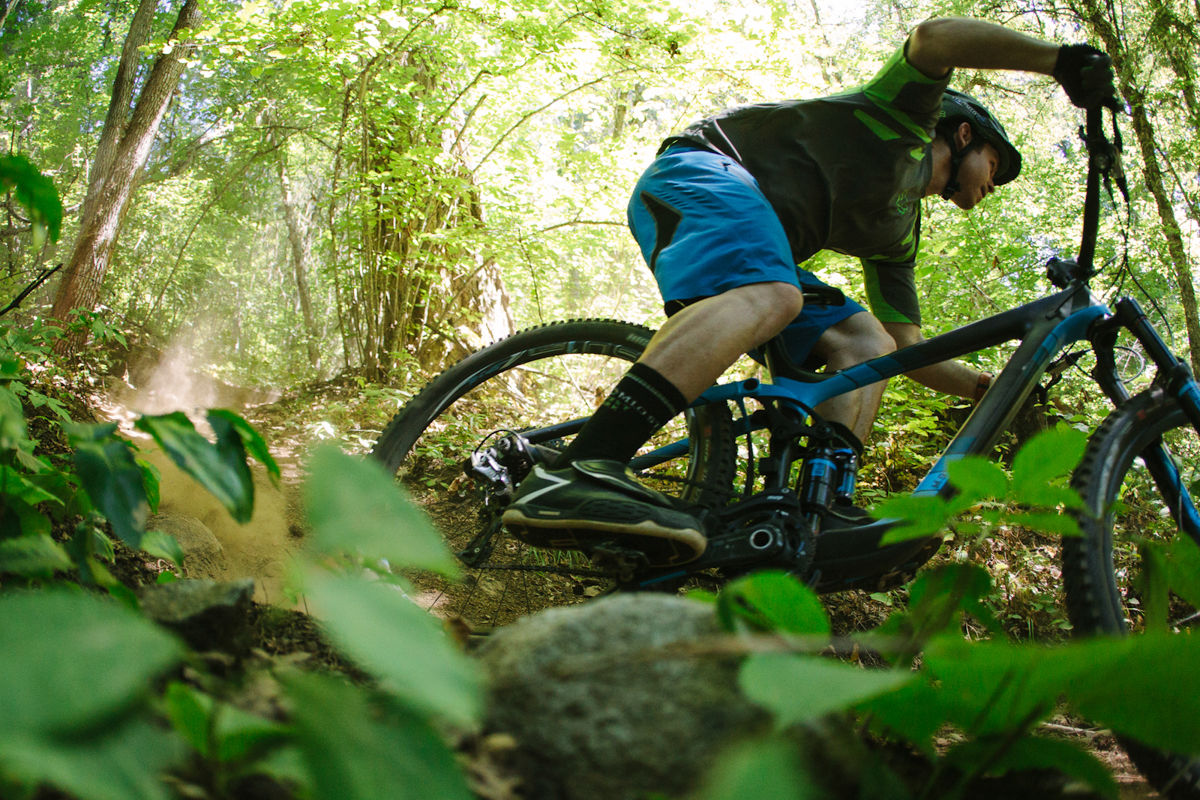 Over two days we rode the bike on a mix of trails; from scree slopes straight out of any freeride film, to dry and loose soil, to baby head fields of doom – we rode it all. Our first impressions? It is a downhill beast. It sucks up the worst of it and gives confidence to let off the brakes a little more. We actually were able to ride the Reign side-by-side with the new Glory, and while it’s not quite up to the 200mm-travel performance of its bigger sibling it was just speed that was lost, not ability to navigate the terrain comfortably. We can easily say that this bike would be able to handle 99% of trails in Australia.
But all that downhill ability must come at a cost right? Well, we didn’t notice any.  Sure, it’s not World Cup XCO machine on the climbs but riding the Reign up hills never felt difficult and with the suspension adjustments front and back the geometry was easily changed to something a little more climb friendly. Just drop the Dual Position fork a little lower, and flick the easy-to-reach shock lever.
Cornering was great with a sub-340mm bottom bracket height really helped to keep traction through the turns. A few times we smashed our pedals,  but that was only when pushed through all the travel on trails littered with baby-heads. Any bike with a low bottom bracket will need more attention in that department.
Overall the ride was great, and the super descending abilities were’t to the detriment of an excellent all-mountain ride.

We really need to spend more time on the Reign, and we expect that we will. So far it’s proved to be an amazing re-birth of an old workhorse and a bike that really starts to blur the lines between downhill and all-mountain when it comes to descending, but which somehow retains genuine all-round usability. Only a few negatives for us: for the price we’d love to have seen some carbon wheels on the Reign 0, we still don’t like Giant grip or the rattly cables, but that’s it. The price tag of the Reign Advanced 0 Team will keep it in the realms of impossibility for many, however the exact same platform extends down to lower spec and price levels. If you’re after a longer travel bike for all-mountain riding, Enduro racing or even as lightweight downhiller you can still take out all day, the Reign has to be on your shortlist. We’re adding it to ours.