We do test a lot of pretty high-end bikes here at Flow. We admit it – we’re nasty little gear-whores. But what if you can’t afford a $5000 carbon bike? What if your budget is less than a third of that?

Turns out that you can still get quite a lot of machine for under $1400. The new Polygon Recon 4.0 is a 27.5″-wheeled, 120mm-travel cross country bike with some really impressive features for such a relatively meagre price tag. 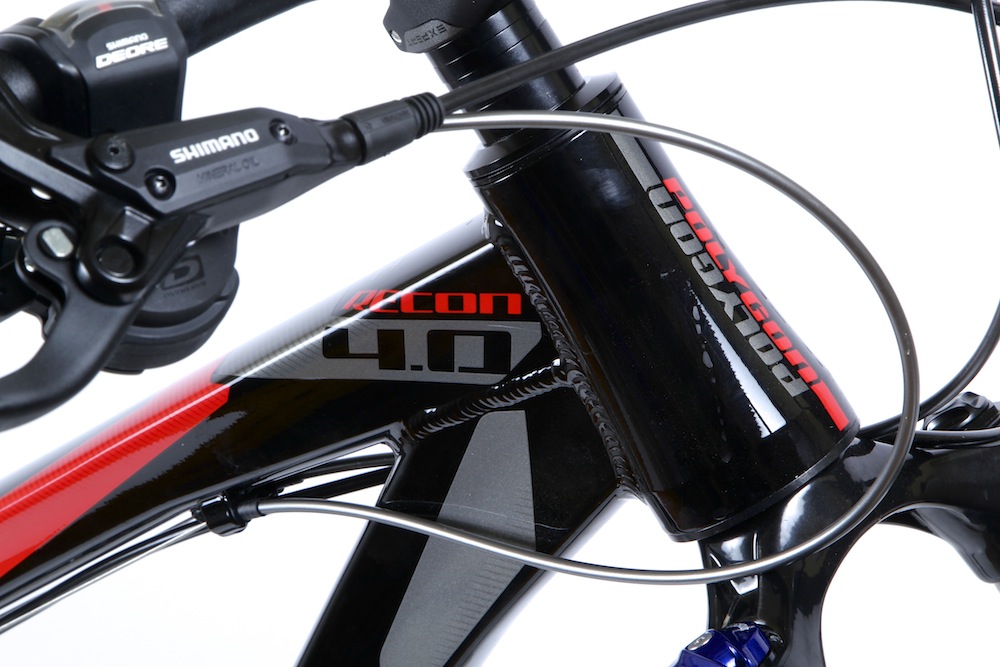 Popping the Recon onto the scales was a real surprise, weighing in at just 13.6kg (or around $1 for every 10g of bike). That’s a LOT lighter than we expected.

The frame won’t win any beauty contests, but it looks perfect sound from a practicality, reliability and construction standpoint, and obviously the frame weight isn’t excessive. With Shimano from head to toe we’ve got no issue with the component selection. Sure, the Octalink cranks are a little outdated, but we used this system for many years without worry.

Top marks to Polygon for including the Rockshox Recon TK Gold fork, which is considerably lighter and smoother than the Recon TK Silver fork (which uses steel legs). We’ll put a question mark alongside the Suntour Epicon rear shock for now. Hopefully it can handle the jandle out on the trails.

It sounds strange to say, but we’re actually really looking forward to putting the glitzy bikes aside for a while and testing this bike. We think it’ll be pleasantly refreshing to remind ourselves that you can still have a hell of a lot of fun on a bike that’s doesn’t have a dollar value higher than Craig Thomson’s credit card bill.

The 2014 Polygon Recon 4.0 has the soul of an XC bike, and the heart of a trail renegade. It boasts all the features you need for all-day performance combining light weight, ample travel, extreme control, and unparalleled versatility.

The Recon 4.0 starts with some of the industry’s most advanced, tried and tested frame technology. The triple butted, 4-bar alloy cross country frame with 4.7″ of travel in the rear ensures maximum power transfer to the rear wheel while still absorbing the most daunting terrain like a champion and with the Rockshox 30 Gold fork attached to the tapered headtube, this frameset makes the ultimate platform for control, response, and high-endurance riding.

To further bolster power and efficiency, the Recon 4.0 comes equipped with a full Shimano Deore shifter and derailleur setup that is powered by a lightweight and virtually indestructible Shimano Deore Crankset. The cockpit boasts 6061-T6 Double Butted, 740mm handlebars mounted on a 80mm stem that work with the tapered head tube to maximize steering response and control. A Entity Expert Saddle is light and comfortable and mounts on a feather light 6061 seatpost. The Shimano Deore hydraulic disc brakes are light and powerful for dependable stopping in any conditions.

Drop this whole high-performance setup onto a pair of light, durable Shimano MT-35 27.5 inch wheels and Schwalbe Smart Sam tyres, and you’re assaulting some cross country with some of the industry’s best engineering.