Price is fork only

Concerns about damaging the fork stanchions.

The US Air Force just called. They want their fork back.

It’s been a couple of months now since Rockshox lifted the lid on one of their most ambitious projects to date: the RS-1. And when Stan the friendly courier arrived bearing this SRAM fork and wheel box, it was all we could do not to hug him – we have been absolutely hanging to get our hands on this one! 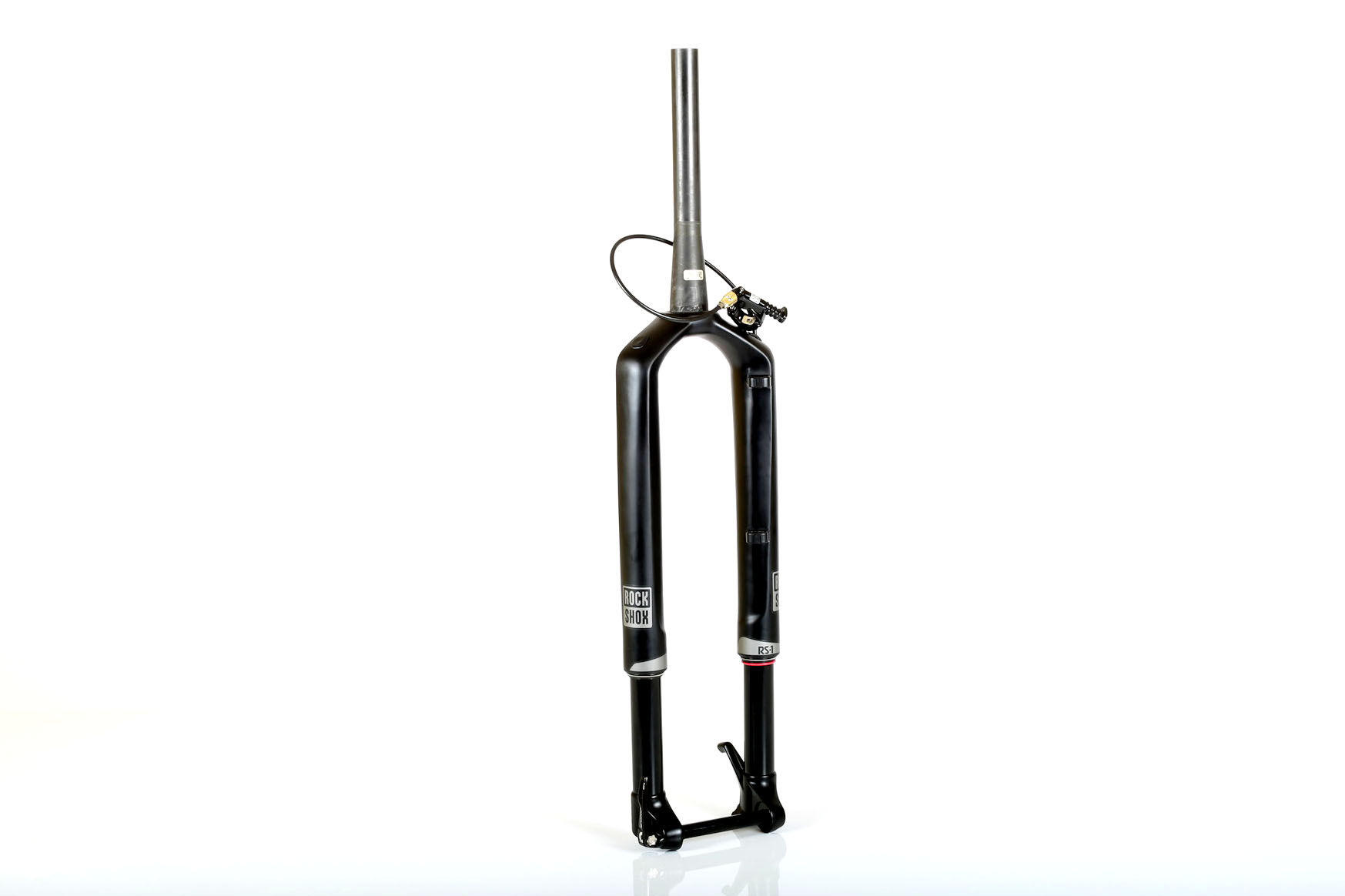 Those with a long memory may remember the original RS-1, first launched in 1989. In giving this new, inverted fork the same moniker as their very first mass-produced suspension fork, Rockshox is making a statement – they see this fork as another game changer. But just as it was in the early days of suspension, the RS-1 has attracted equal parts excitement and derision.

One camp of Internet warriors is in a lather of froth, buzzing about the amazing looks, construction and performance prospects of the RS-1. The other camp are crying, pointing to the price, proprietary hub system and the flex/durability issues that have plagued previous attempts at inverted fork design. We cannot wait to find out the truth of the matter, which lies out there on the trails. But first, let’s take a look at the RS-1 in all its undisputable glory and answer some of the key questions about this unique fork.

Who is it for? With a largely carbon fibre construction, 29er specific design (for now! We’re sure a 27.5” version is in the works), and a weight of 1665g including axle on our scales, the RS-1 is squarely aimed at the cross-country racing and riding crowd. As such, you won’t find the RS-1 in a long travel guise; there are 80mm, 100mm and 120mm options. We opted for a 120mm version, to match the rear end of our Trek Fuel EX 9.9 29 test bike.

The gram counters out there will notice that the RS-1 is in fact heavier than the top-end Rockshox SID, by a not insubstantial 50g or so. So if the RS-1 is not all about making the lightest fork possible, what’s the rationale of the inverted design? Well, there are plenty of advantages, though up until now, no one has made a fork that has actually delivered on many of the theoretical up-sides to going upside-down.

Up until now, no one has made a fork that has actually delivered on many of the theoretical up-sides to going upside-down.

In the main, with an inverted design, there is the potential for superior suspension sensitivity. Gravity ensures that the fork seals are constantly bathed in lubricating fluid, which reduces stiction, and the fork bushings are located much closer to the hub axle, which theoretically should reduce suspension binding and friction too.

There are other advantages too, including mud clearance, and the potential for a stiffer, more precise steering fork at a lower overall weight. We put an emphasis on the ‘potential’ because this is the area where inverted mountain bike forks traditionally suffer. Anyone remember the Marzocchi Shiver single-crown fork? It steered like it was made from wet newspaper…

Overcoming this issue (and the stigma about inverted construction that accompanies it) was one of the key battles that Rockshox faced with the RS-1. The answer they came up with was to make the front hub a more structural component of the fork than ever before. Rockshox term it Predictive Steering, and the RS-1 requires a proprietary hub (yes, we know – another standard). It’s all built around a massively stout 27mm axle that Rockshox have dubbed the Torque Tube. The huge axle slots into deep dropouts and there is a whopping amount of contact between the hub end caps and the fork itself. It’s all then locked in place by a conventional 15mm Maxle.

We’ve got to say, it’s pretty impressive in the flesh, and it certainly gets us thinking that the hub/fork interface is an area where even conventional forks have room for improvement.

One issue that we have seen much discussion about on social media and the frontlines of the forums, is the potential for damage to the fork stanchions. Unlike other inverted designs such as the current Cannondale lefty, the RS-1 does not have a provision to fit any kind of fork guards to ward off rocks. This is one area that we too are worried about; on a conventional fork, the stanchions are fairly protected by your bars in the event of a crash whereas the RS-1’s sliders are much closer to the ground.

Although the fork’s inverted design is the obvious talking point, there’s plenty more that bears discussion. Controlling the fork’s action is a Solo Air spring, which uses the same Bottomless Token system to control the progressiveness of the spring curve as used in the Pike and BoXXer. Fitting more tokens to increase the ramp-up of the spring curve is a simple job and requires no special tools.

The damper is new too. Called the Accelerator, it’s a sealed cartridge damper, and it comes equipped with an XLoc remote lockout lever as standard. The damper doesn’t offer any external low-speed compression adjustment, just low-speed rebound. However, it does feature Rockshox’s excellent Rapid Recovery rebound damping circuit, which helps get the fork out of trouble on big hits that force it deep into its travel.

For our test, we were supplied a Roam 50 front wheel ($680) equipped with the requisite Predictive Steering hub, but SRAM Australia also have the more cross-country oriented Rise 60 wheel to suit ($1250). For those who’d build their own wheel, there’s a hub-only option in 28 and 32-hole drillings ($289). DT Swiss will also be making hubs to suit and we’ll track down pricing prior to our final review.

It’s easy to be sceptical about an item like this, with all its hype, expense and fiddly non-standard hub issues. But this is THE leading edge of mountain bike technology, and the proof will be in the muddy pudding of Sydney’s winter trails. Now, we’re going riding.