SRAM’s first downhill specific complete drivetrain drops it down a few gears, to 7.

To address the needs of the faster descenders out there, SRAM have taken elements and technology from their wildly successful and game changing 1×11 drivetrains XX1 and XO1 and created their very first downhill specific drivetrain; the 7-speed dedicated X01 DH. Using only the gears that you really need, when pointed downhill.

Flow hopped over to Queenstown, NZ recently to join select media to take a first look at this very specific system with the people that designed it, then flog it down the sweet trails on offer to see how it performed. 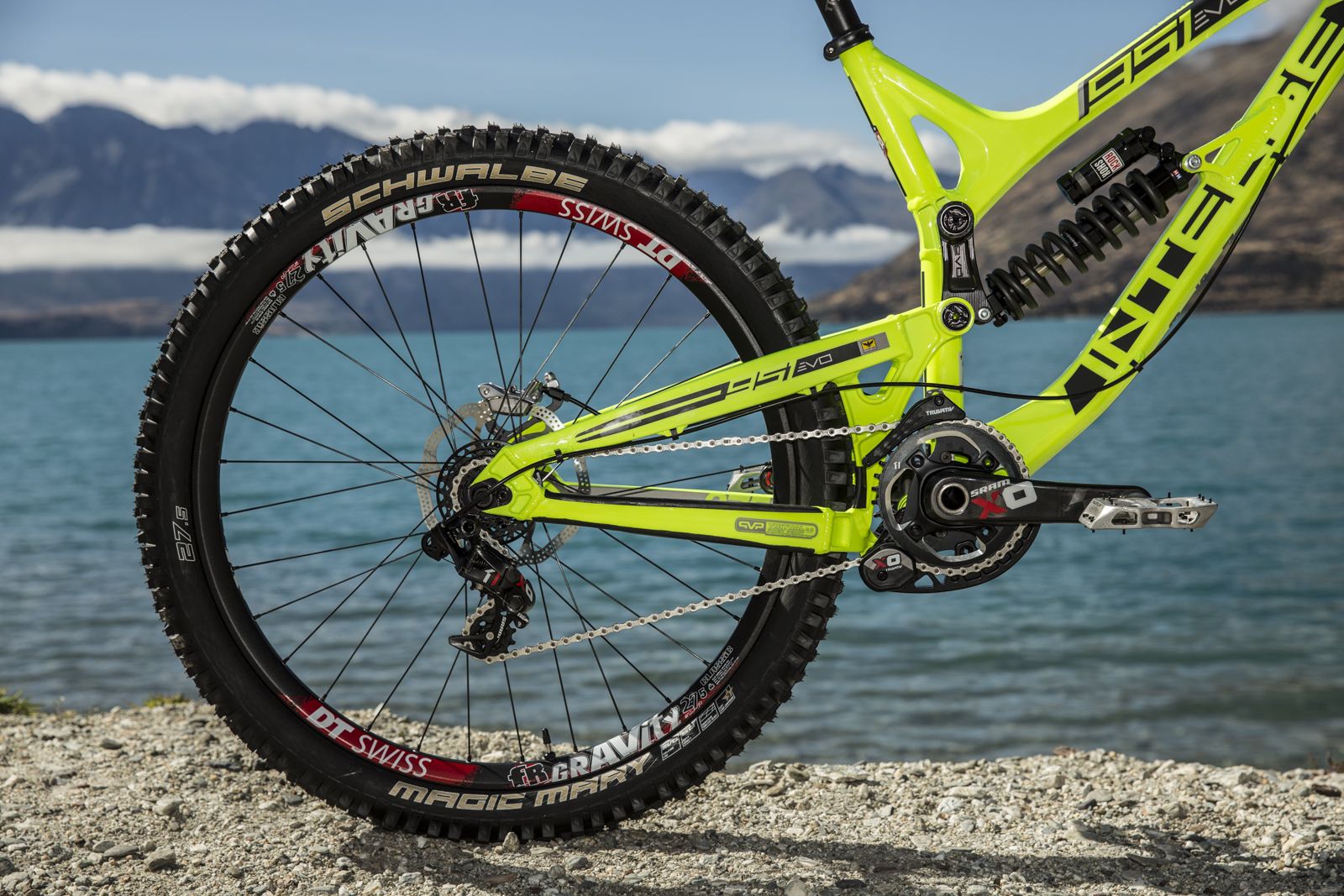 When we first saw XX1 in the flesh a couple years ago, we learned that this slight, but very clever twist to the modern derailleur concept was actually first intended as a downhill prototype ten years ago. SRAM was aiming for the most stable rear derailleur possible, hence the X-Horizon system was hatched. All these years later, SRAM drop a DH specific, compact, light and precise drivetrain in our laps.
This stability we talk about is the key element to consistent chain retention, durability, a quieter bike and the luxury to shift gears whenever you need to. The X-Horizon derailleur (seen in XX1 and X01), use pivots that are horizontal to the ground, and not on a slant. This means that if the bike takes an impact, the derailleur will be forced to bounce up or down, X-Horizon keeps it from moving side to side causing unwanted ‘ghost shifting’.
If this doesn’t make sense, next time you see a SRAM X01 or XX1 derailleur, push the front section of the derailleur straight down with your hands, it won’t travel side to side at all, just up and down. And then do the same with a regular 10 speed or older derailleur, the downward motion will see it travelling sideways towards the wheel and back again, which can cause an unwanted gear change. That is exactly what you don’t need when you’re putting all of your power into the pedals.

One of the first things we thought was, why would SRAM release a downhill drivetrain before a lower price point version of the sweet 11-speed stuff that we love so much? SRAM’s external drivetrain manager Chris Hilton stated that while their single ring specific 11-speed system was hugely successful, it still has the perception of being elite spec to consumers, hence the step sideways into downhill rather than tricking down to X9 or X7 price points to cater for many more bikes.
We realise that a downhill specific drivetrain won’t set the Australian market on fire, but we do believe that it’s a step in a good direction, and solves a couple key issues that come along with the high demands on drivetrains that hang off the back of a downhill bike.

We’ve seen tech-savvy downhillers using road cassettes instead of mountain bike cassettes for years to gain a lighter, more compact and simpler drivetrain, this results in having a very close ratio set of gears and can be used in conjunction with a shorter cage derailleur. The most popular road cassettes for DH would usually be 11-26 teeth, whilst this X01 DH cassette’s range is from 10-24. The ratio is spread apart more this way, giving you very close to the same range as a 10 speed road cassette, but in only seven gears. Specialized were also a brand that offered their own custom 7-speed X0 drivetrain on their flagship S-Works Demo downhill bike.
Having a slightly bigger jump between gears was intended to improve the efficiency of downhill racers. As that super fast guy, Stevie Smith puts it, “I don’t double-shift any more”. One click of that shift lever now takes you to the next gear you need, solidly engaging into place with real confirmation and purpose. 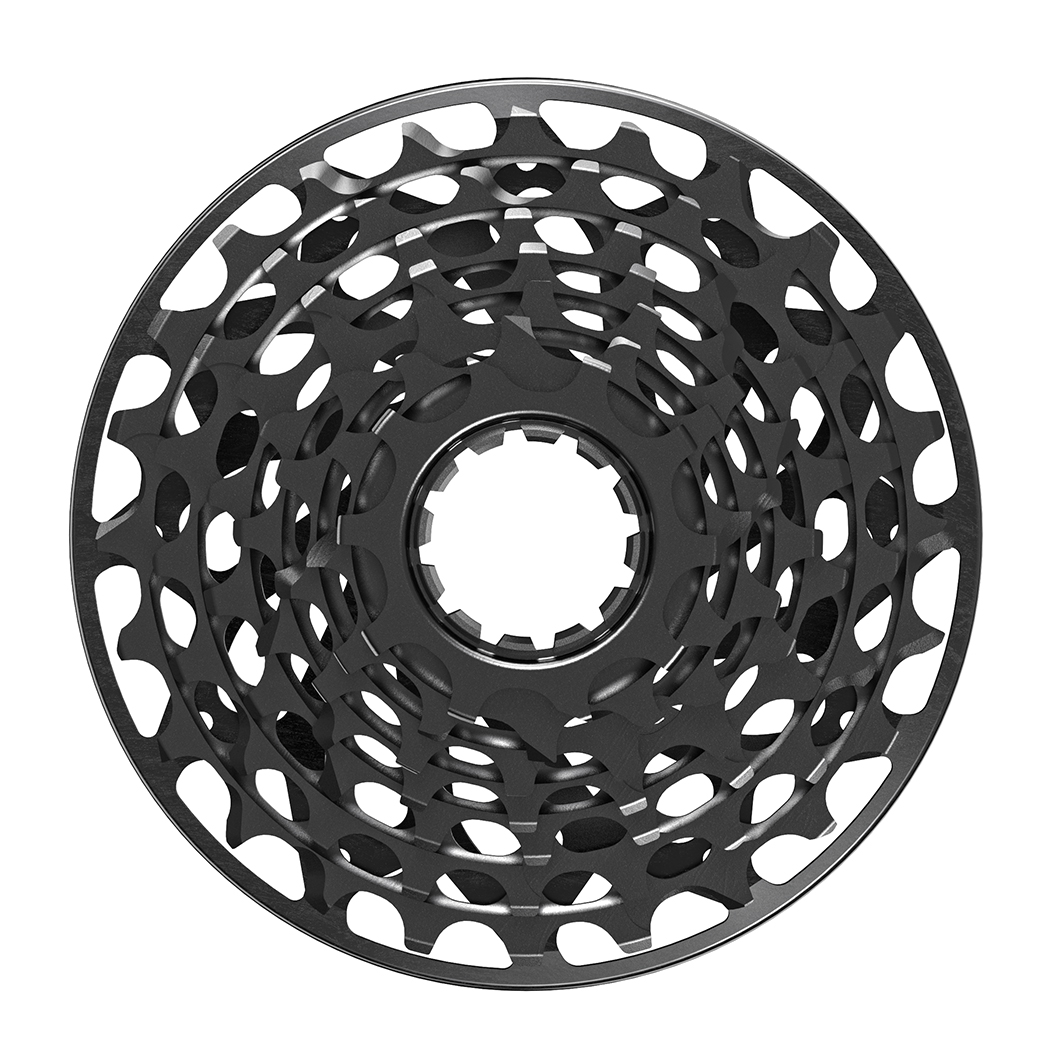 Using only the gears that downhillers need, this cassette uses the exact ratio 10, 12, 14, 16, 18, 21, 24. A tiny 10 tooth cog gives the drivetrain a very high and useable gear, which in turn allows the rider to use a smaller front chainring, increasing ground clearance. It’s also SRAM’s lightest cassette ever made, at a svelte 136 grams, lighter than the top level SRAM Red road bike cassette, (sucked in roadies, we have a lighter part to play with now). It does mount to SRAM’s XD driver body, which now hundreds of wheel manufacturers are offering as an option. It’s no longer an issue as it was in the very early days of XX1 to find a wheel, compatible with this technology.
Standing with a view from the rear of the bike, you will see a large gap between the lowest gear and the spokes of the wheel, where four more cogs would usually be if an 11-speed cassette. A correctly adjusted derailleur won’t let the chain drop off the large cog and into the spokes, but it still made us wonder if a downhill specific freehub body, shorter in length for only 7-speeds could have allowed for a wider-spaced hub flange, effectively making a stronger wheel. But, that’d mean another standard and what we can see here is SRAM making more than one system work well, on one standard of freehub.

The fundamental difference between this 7-speed derailleur and the 11-speed ones is two parts. A short and medium cage is available as it doesn’t have to deal with the huge 10-42 range of the 11-speed system, and the actual range of lateral movement range has been restricted to only seven gears worth of travel via longer limit screws, and the internal architecture of the derailleur maximised for less throw.
Otherwise it uses the same clutch technology, X-Sync jockey wheels that interlock into the chain’s alternating links for added security and of course the horizontal mechanism that keeps it from ghost shifting when the bike takes impacts when pedalling. It’s still quite a bulky looking unit hanging off the back of the bike though, and at a juicy $369 it’s not going to be a nice experience if encountered with a rock going quickly in the opposite direction. In fairness though, we’ve yet to find the size of the detailers with our 11-speed drivetrains an issue, as we first thought with XX1.
The reason for the two cage length options – medium and short – is that some modern downhill bikes have such extreme chain growth that the medium cage derailleur is needed to deal with the growth of the effective chain length when the suspension compresses into its travel.

An 11-speed shifter will work on this system, as it’s simply less clicks for your thumb that separates 11 and 7-speed shifters apart. But SRAM have developed a dedicated shifter, with only the gear indexes you need to drive the derailleur in its full range.

No major changes here, SRAM have offered a DH specific version of the carbon X0 crank for a little while now, in a short 165, 170 and 175mm lengths. It still uses the aluminium insert for the pedal threads, but now comes with the X-Sync chainrings with a large range of options; 30, 32, 34, 36 and 38 teeth. Choosing the right chainring will be related to how steep the trails you ride are. It’s an easy system to change, and carrying a couple chainring sizes in your toolbox will make sure you’re never geared too high or low when practicing on new race tracks. 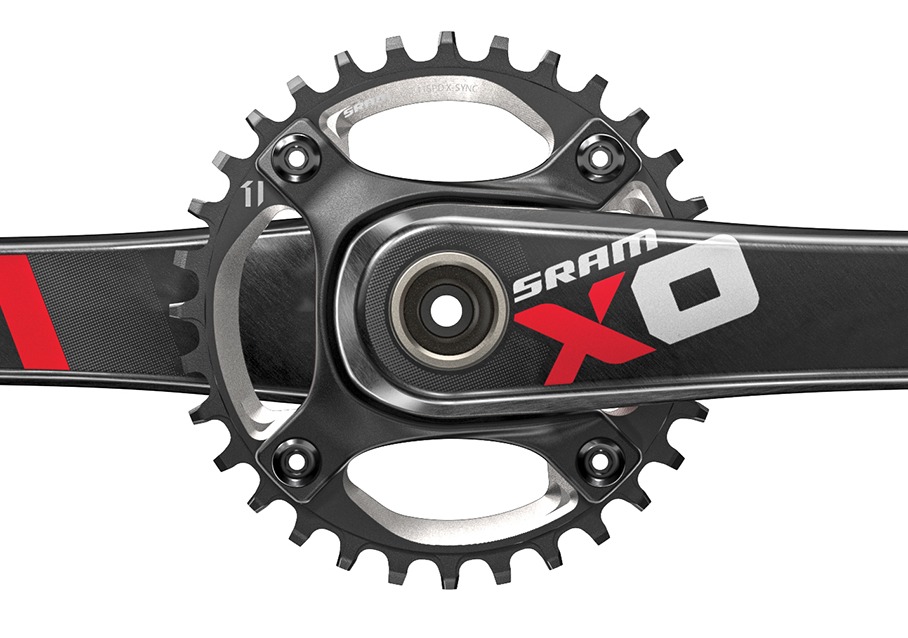 Possibly the coolest factor about all this new stuff, is that you can pick and choose each component separately and it’s all either available in a 10-speed variant, or compatible with existing 10-speed drivetrains. Considering the high cost of the cassette, this will raise many eyebrows, we’re sure.
With the vast majority of downhillers currently running a SRAM 10-speed setup could simply grab a derailleur and a chainring to bring their current setup very close to the performance of the complete 7-speed kit. This will negate the need for a new cassette, freehub and chain. This is a very nice feature in our minds, the wide compatibility of X01 DH doesn’t leave the current SRAM user feeling left out of this good gear.
You could also still use Grip Shift with the 10-speed option if you wish.

Yes, we rode this drivetrain, a lot. Fitted to a Devinci Wilson Carbon and an Intense 951, we ploughed these sweet bikes down a number of seriously amazing trails. In two days we knocked out 19 laps of the Queenstown runs under the Skyline Gondola, half a dozen shuttles in the Remarkables, and then one mega helicopter assisted run from the very top of Coronet, down into Rude Rock and Skippers Canyon. Plenty of gear shifting, and rowdy riding occurred.

First thing we all noticed was the silence. The bikes were dead quiet, all you heard was that comforting thud of the rear tyre belting the dirt, and the occasional crack of the chain as it engaged into gear with impressive clarity.
If anything, a quieter bike is a faster bike to us. We were practically sold on this drivetrain from that one concept alone! Riding amongst other riders bashing through the trees, there was just none of that clanging and smashing sounds of the chain slapping about, giving you that harrowing feeling your bike is being pushed too far. We were very happy indeed.

Stability was stellar. The X0 chainguide, with a top guide and lower roller worked flawlessly, we of course never dropped a chain. A few of the SRAM staff were knocking around on their own bikes, actually using only a top guide, with no roller. Without the roller underneath the chainring you would decrease drag even further, we would not hesitate to go this path either as our faith in the X-Sync system is enough for us.
When it came to shifting, we honestly forgot about it pretty quickly. The gear changes were less-frequent, positive and very light to actuate with a light push of the thumb. What Stevie Smith was saying about the lack of double or triple shifting became very apparent, the jumps between gears just seemed right.

We can’t quite vouch for durability too much, but during our three days of riding our system never missed a shift, made a sound or even caught our attention in any negative way.
SRAM seem to be moving quite rapidly in developing new products these last couple years, and with the success of the 1×11 technology now available to downhillers with its high performance and compatibility with existing 10-speed drivetrain, we are more than impressed. Let’s go downhilling!