The best of both Fox 32 and 36 forks. CTD damper is user-friendly. Revised air spring gets full travel.

Our test fork was quite sticky from new.

In all-mountain riding the ‘bigger is better’ mantra generally applies with any component that you fit to the front end of a mountain bike. But going bigger, beefier, stiffer or stronger normally means more weight, and overcoming this tradeoff is a battle for the product engineers. We want it strong and stiff, but we won’t put up with undue heft. We were very happy to get our hands on the new FOX 34 Float in a 160mm travel version to see if FOX had succeeded in treading this fine line.

This fork makes a lot of sense: 160mm-travel bikes are increasingly common as they get lighter and more efficient, but the popular FOX 36 fork often found on these all-mountain bikes is a pretty hefty little number. With more and more people looking towards the 160mm category as the do-it-all bike, FOX wanted a way to offer the same amount of travel and stiffness, but to lose a little weight and facilitate the use of lighter 15mm axle wheels. Enter the FOX 34.

As you’d have guessed from the name, this fork is all about legs. Beefy new 34mm diameter legs to be precise. Previously, FOX forks of 150mm-travel and below used 32mm legs with a 15mm axle. In longer travel applications (anything 160mm and up) FOX used 36mm or 40mm legs combined with 20mm axles. The new 160mm-travel FOX 34 is pretty much the perfect hybrid, combining the new 34mm diameter legs with the lightweight and widely used 15mm axle standard.

Fitted to a Yeti SB66 Carbon, the tall 160mm travel fork wasn’t the perfect match to the 150mm travel rear end, the fork is however adjustable internally down to 150mm if desired. We plan to drop it down to sharpen up the bike’s head angle slightly. A 34 TALAS is also an option, with adjustability from 160mm down to 120mm for the steep ascents. Interesting to note; the FOX 34 at 160mm has an axle to crown height that is 7.4mm lower than FOX 36  – running the 34 160mm doesn’t mess with the bike’s geometry nearly so dramatically as would occur with the 36.

Visually, it’s surprising how much chunkier this fork appears when compared to 32mm forks. And the extra beef is 100% noticeable on the trail; this fork is seriously stiff! You become used to a degree of deflection, twisting and flex with most lightweight trail forks, but with the 34 this was drastically reduced.

The confidence we found when piloting the fork down rough and steep lines was higher than we have been accustomed to, and we were able to adapt our riding technique to make the most of it. In short we had a lot less care about what we were ploughing our front wheel into, and focused that energy into the fastest line choices. Straight-line speed was a highlight too, and a lot of this has to be attributed to the stiff chassis.

The stiffer chassis does transfer generate more feedback than a 32mm fork – the classic ‘when is stiff, too stiff’ debate. A Float 32 does feel smoother, as the thinner legs offer slightly more compliance. Lighter riders may notice this, but a heavier or more assertive rider shouldn’t be fazed by it.

In typical FOX style the fork’s action is unrivalled, the control and consistency is simply unreal. The rate of compression is quite linear, finding us in the deeper part of the stroke a lot and letting us get full travel without too much effort. This is all due to the completely redesigned air spring, which finally addresses the issue of it being hard to get full travel out of FOX Float fork. If you prefer a more progressive fork action, the more savvy suspension tuners may benefit from adding a little oil to the air chamber, to reduce the air volume.

Our test fork came to us feeling a little dry and sticky unfortunately, so the sensitivity over small bumps was not quite 100%. A little stanchion lube (Finish Line Teflon suspension lube) applied to the pretty gold Kashima legs instantly, but temporarily, gave us the smooth action we expected. To resolve the issue properly requires a quick 30min service – simply yank the lower legs off and perform a seal and foam ring lubrication. We also found storing the bike upside down to allow splash oil to soak into the seals helped the fork feel smooth at the beginning of the ride.

2013 sees FOX introduce a new damper too, called CTD – it stands for Climb, Trail and Descend. In short, the new damper is all about simplifying adjustment options and helping the fork and rear shock to work in unison. A lever on the right fork leg lets you select between Climb (firmest compression damping) or Descend (least compression damping), or an in-between ‘Trail’ setting. The ‘Trail’ setting has three levels of adjustment too, brilliantly called Trail Adjust – you simply set it to the level that’s right for you and leave it, kind of like the three ProPedal settings on an RP23 rear shock. (NB. The less expensive forks lose this Trail Adjust function). While some people will lament the loss of the low-speed compression dial found on the RLC or RC2 dampers, it’s definitely a far more user-friendly system for the average rider.

In response to the fairly linear rate of travel, we rarely rode the fork in the Descend mode; even on the roughest descents we opted for the Trail mode in setting one or two. This offered greater support, especially under front braking, without detracting too much from sensitivity.

So is the FOX 34 platform a winner? Hell yes. Stiffer than 32mm, lighter and lower than a 36mm fork, the 34mm fork is a no-brainer for the fast growing realm of all-mountain bikes. And of course, with longer travel big-wheelers appearing everywhere, the stiffer chassis of the 34mm fork is going be increasingly important in controlling the inherent flex found in the longer legs of a 650B or 29er fork. So yes, bigger is better in this case, and in our eyes it’s added weight in the right place. And you cannot beat the look of those gold Kashima legs, hot stuff indeed. 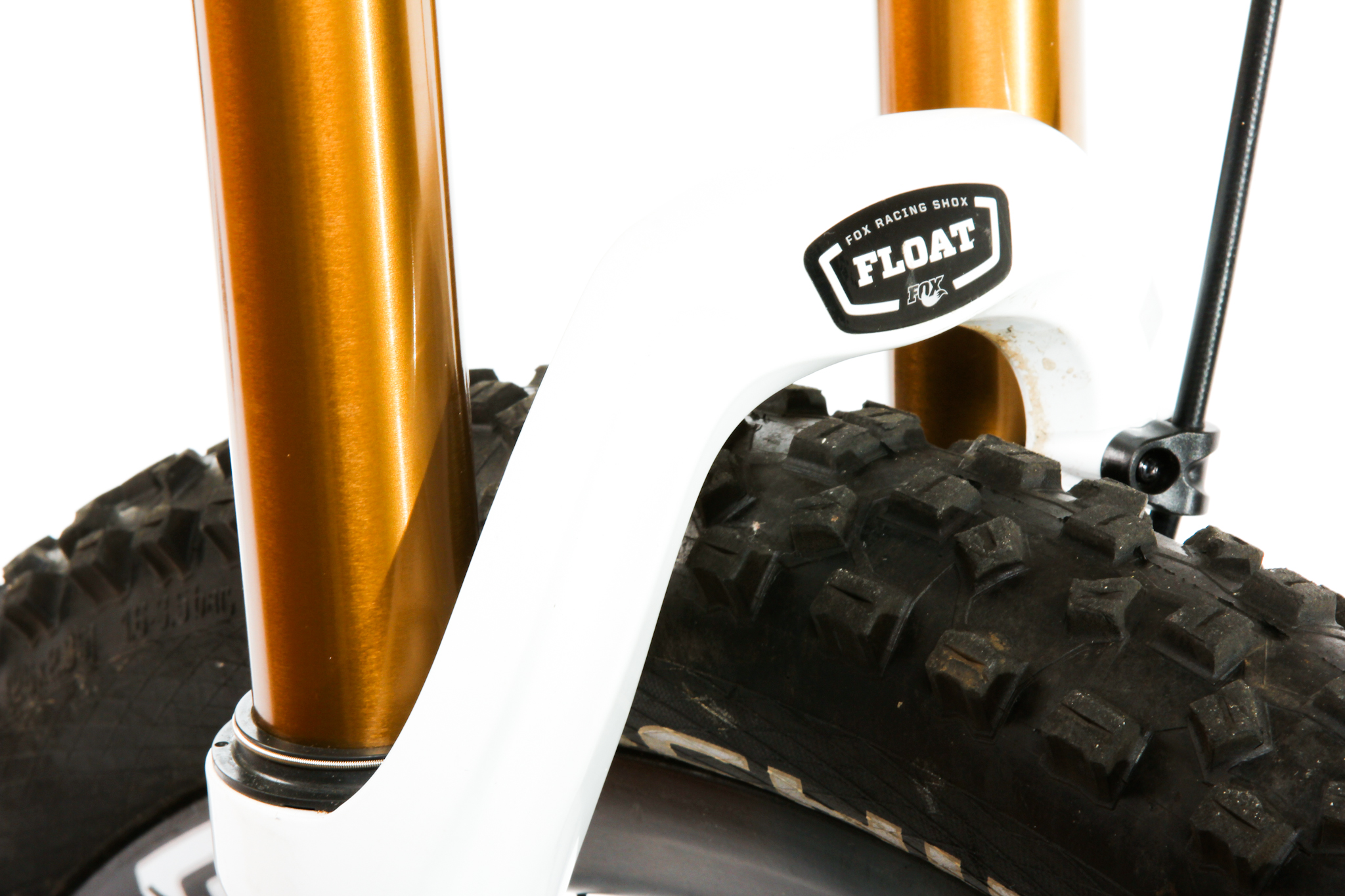