Rattling Reverb hose inside frame.
Not to be mistaken with an all-rounder, this fella is burly!

Giant have really stepped it up a notch with the latest Reign, everything about it speaks the right lingo to the booming new-school crew of hard trail riding and enduro racers. From the bike’s geometry, to the choice of the most popular components, confirming to us that the folks at Giant have their ears to the ground about what riders really want. 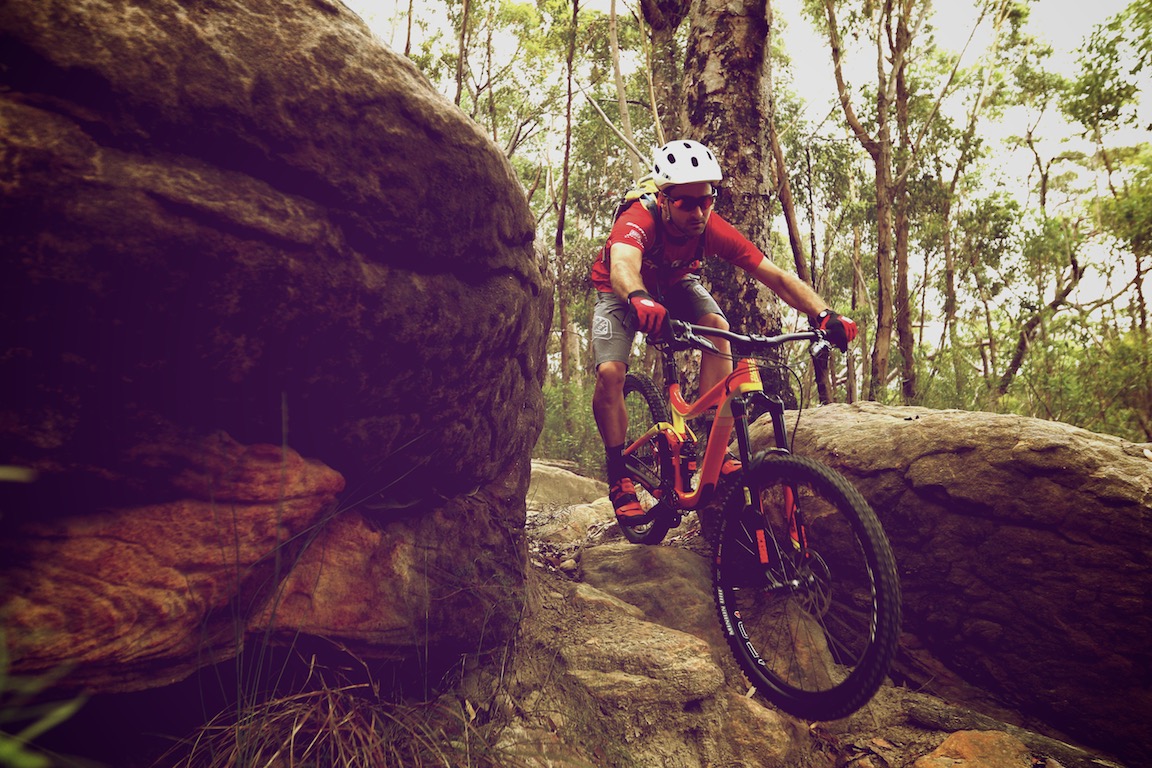 The first thing you’ll notice is the wild mango explosion paint, it’s unlike anything we’ve seen from Giant in the past, actually we like all the 2015 Reign paint jobs they seem to talk to the new crew with a touch of retro flair. Especially with the colour matching highlights on the rear shock, fork and hubs, it’s very on-trend.

The frame is made from Giant’s ALUXX 6061 aluminium, with a wide array of tubing shapes and well thought out cable routing. Up close the finish is very neat, the welds and details are absolutely perfect, no surprises though coming from the well established industry giants.

The cable routing is neatly carried inside the front end, but we experienced a tough rattling noise from the RockShox Reverb hose inside the frame when riding along, nothing that can’t be silenced with a bit of foam stuffed into the frame.

Their Maestro floating pivot suspension is used across the whole Giant range, and for good reason – it allows the engineers behind the bike to really nail the balance of pedalling performance, suspension suppleness and active rear braking. All the hardware stayed tight the frame displays stellar lateral rigidity, which greatly boosts confidence when riding hard.

Interestingly the shock sits off-centre in the frame away from the drivetrain, creating more space for the drivetrain and the lower linkage and the top shock mount pivots on a sealed bearing in place of a bushing, further reducing any unwanted stiction in the rear shock’s stroke.

The Reign is from the long top tube, short stem club with a medium size frame stretching you out over a 62cm top tube. The rear chainstay length is on par with many bikes of this suspension travel size at 434mm.

And of course keeping in the theme of the Giant brand, the wheels are 27.5”, with no 29er option. Simple to understand from a consumer point of view across the board, and thankfully Giant are sticking to it.

What Giant have done really well here is dressing the frame in the most suitable components around, so you could pull it out of the box and ride it hard, straight away, or race it competitively without making one single modification to the parts. It’s so well rounded and complete that we struggled to find a spec choice that we’d rush out to make, if we did have to pick something perhaps a handlebar with greater back-sweep would be a nice upgrade down the track, but that modification is not going to change your life.

The bars are also a whopping 800mm wide, so unless super wide bars are your thing or your shoulders are so broad you turn sideways to walk through doors, you may want to look at trimming a couple centimetres off the ends for quicker handling and clearance from those trees that don’t move out of your way. Bar width is certainly worth customising, it’s a quick modification and can make a lot of difference.

The tyres are ideal for this bike and a crowd favourite. Essentially downsized downhill tyres, the Maxxis Minion/Highroller combo is also set up tubeless with the supplied rim strips and valves. This excellent rubber is responsible for much of the Reign’s confident cornering ability.

It may only be the second tier price point option in the Reign line, but it features the premium fork and shock from RockShox, a nod towards the priority of quality suspension from Giant. The RockShox Pike uses the two-stage air spring system that allows you to toggle between two travel modes, on this one you can drop the fork down from 160mm to 130mm of travel. We’ll come back to this later, but it had a very positive impact on the bike’s versatility.

A RockShox Reverb Stealth seatpost keeps in the SRAM theme and worked perfectly during testing, they really are the industry standard right now. And the SRAM 11 speed drivetrain completes the package with category dominating performance.

No doubt about it, the Reign 27.5 is a whole lot of bike. The bike’s overall length and slack angles are about as subtle as a train smash; just standing still it looks huge and with the forks so raked out in front of you it feels like you’ve just sat on a regular downhill bike.

Taking a quick look at the frame geometry, with a 65-degree head angle, 620mm top tube and 434mm chain stay we were sure to expect big things when descending but notice a trade off everywhere else. Well, we were pleasantly surprised and after a couple rides we were absolutely flying on the trail.

The notion of short rear ends on bikes is a real buzz topic in the scene right now, a shorter chain stay (the measurement taken between the bottom bracket and rear axle) will bring the rear wheel closer to the bike’s centre, helping with the agility and snappiness of the handling, especially in tight turns. The Reign won’t make any promises of a category leading geometry, rather it aims to make the most of the generous travel, meaty tyres and stable cockpit to give the rider maximum confidence when the time comes.

You’ll need a fair bit of gravity and rough terrain to make the most of the Reign, and even on our roughest trails we were nowhere near the limits of such a burly bike.

Descending was a blast, letting the brakes off and attacking rocky sections we found ourselves letting it really hang out, wildly hammering over anything in our path with less care for line choice. We began to focus less on seeking smoother lines, or areas of traction and just going for the fastest and most direct line, trusting the bike with real confidence. Such a long top tube would let the bike move around underneath you like a mechanical bull at your 21st party, but with a strong and open stance and determination we were able ride out the loosest riding we’ve done in a long time.

Sure, the trade off to such impressive descending is that you have a big bike to get back up the climbs, but what made it all so much easier was the fork’s Dual Position adjustment via the dial on the top left of the crown, dropping the fork down to 130mm of travel lowered the bars, sharpened the head angle and allowed us to really get up out of the saddle and right over the bars for an efficient climbing position. Combine that with a flick of the rear shock’s compression switch and in all honesty, it didn’t climb too badly at all!

Whilst the Dual Position feature in the RockShox Pike really takes the bike’s versatility to the next level, you do lose a certain amount of goodness that makes the non-adjustable Solo Air forks so impressive. The Solo Air fork can be tuned with the Bottomless Tokens to achieve the right level of progressiveness you’re after, whilst the Dual Position is not adjustable that way. The fork was a little soft under the brakes and would dive a little more, so we ran a few extra clicks of the slow speed compression to let the damping hold the fork up in its travel. In saying that, what the Dual Position brings to the table in terms of the lower climbing position is well and truly worth it unless you’re after the best descending fork option a Solo Air Spring can be sourced from a RockShox dealer.

Weaving through flat and tight singletrack (once we cut the bars down) required a bit of muscle to keep momentum, but the meaty tyres and supple suspension meant you didn’t have to exercise much finesse or caution to find rear wheel traction on loose terrain, just can engage the legs and power your way up anything.

The bike’s overall weight is pretty good too, considering its burliness!

As an enduro race bike, the Reign would be a killer option, especially with such a hardy and reliable parts kit fitted as standard. We’d also happily pop some 2.5″ tyres and race this thing downhill, it’s certainly up for it. 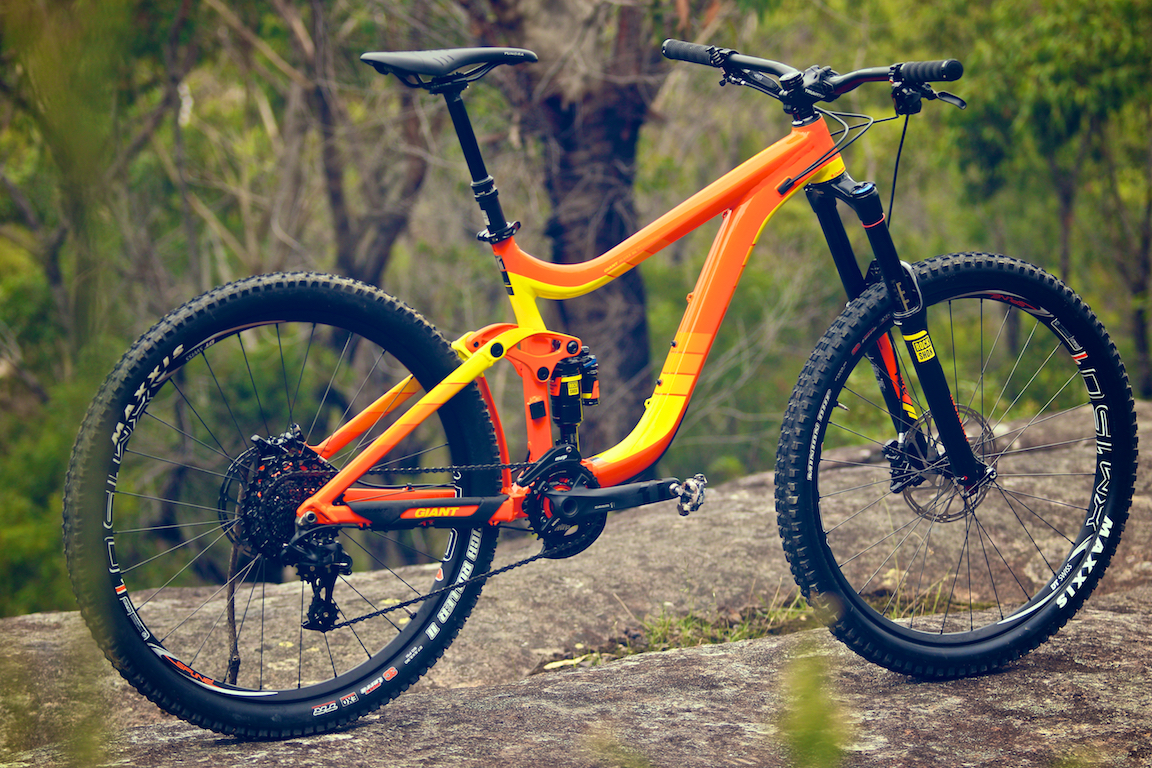 The 150-160mm travel category is loaded with exciting new bikes right now, the mountain bike market is experiencing a massive boom off the back of the rise of the whole enduro thing. The Reign sits at the burly end of the spectrum, for an alternate option there is the Specialized Enduro, Trek Slash, a Norco Range Intense Carbine 29, Polygon Collosus N9, a BH Lynx or the Orbea Occam to name just a few…

The Specialized Enduro in both 29″ and 650B wheel sizes is a fan of the tighter trails and its super-short rear end is a real trademark trait (S-Works 650B review). Norco’s Range is available in a carbon frame for $6000 and we’ve been doing a long term test on the one (Norco Range 7.2 review). Trek’s Slash is one that borderlines trail riding with enduro racing (review here), and the Orbea Rallon is a from lesser known brand with a unique twist, and on a budget (review here). For a real steamroller bike, the 29″ wheeled Intense Carbine 29 is a pretty burly ride (review here).  How about the alien-like all mountain assassin from Polygon (review here) or the swoopy BH Lynx (review here), so many options.

If you’ve got the terrain, the will to let the brakes off and don’t mind lugging a bit of extra meat around the trails, the Reign is up for anything. It gobbles up hard riding like a starved sumo wrestler with a sushi roll.

The Reign certainly sits proudly at the robust end of the all mountain/enduro bike spectrum, it may be worth looking at the more do-it-all Trance if you are seeking a bike to have more of an equality between the ups and downs.

We’ve loved our time on the Reign, it’s a bloody courageous steed that fears very little, it just needs a pilot with the same attitude to make the most of it, who’s up for it?