Superior rear suspension, loves to corner aggressively, handles big hits like nothing else. 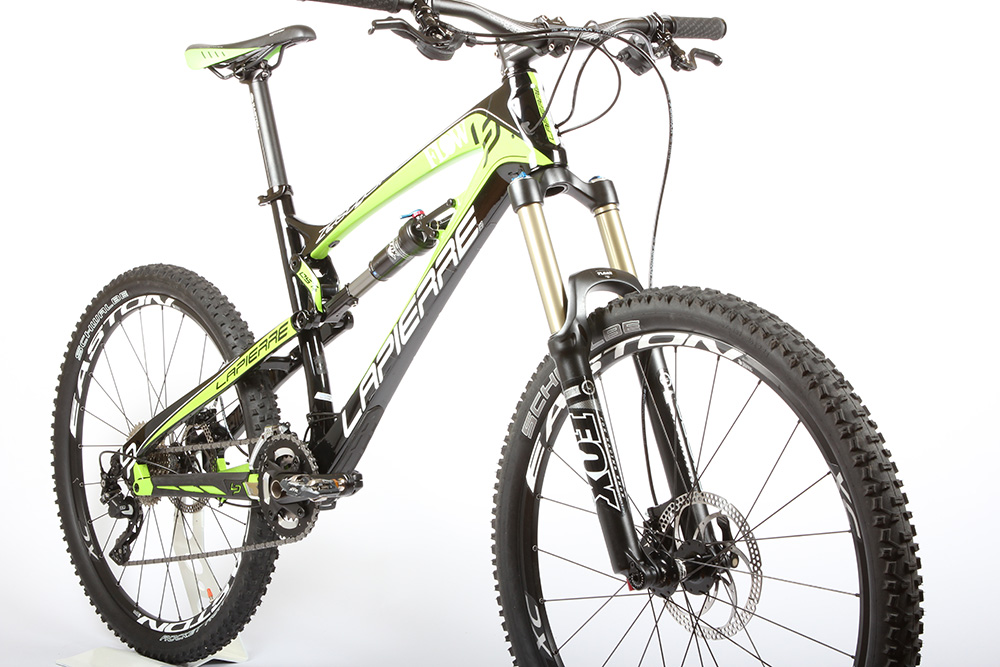 “Are you digging the Lapierre, Mick?”

“Mate, just stand back and take a look at it, check out the angles on this thing, it’s so slack, long and low. So much faster than your bike.”

There are so many elements that come together to make a bike suit a picky rider that knows exactly what they want, riders like us. After only a very short while, the Zesty became that test bike that we simply didn’t want to return. It may sound like we say that often, but in this case if there really was one bike to keep, and to love like our own, it was this guy. And that is how the Zesty was miraculously transformed from being a regular test bike, into a long-term test bike being dragged all over the place exploring trails and entering enduro events.

Close to us at Flow HQ you will find rough trails, tonnes of stepped sandstone, and many enduro style descents with fast ridge lines littered with drops and rocky chutes, plus of course plenty of pedalling to link up the fun and steep bits. So if there were ever a social weekend ride near home and office, that’d be the type of trail that would be ridden. Hence the early onset of Zesty affection, this 26” carbon trail bike is at home where most bikes in its category are out of their depth, especially when trails get rough and fast. 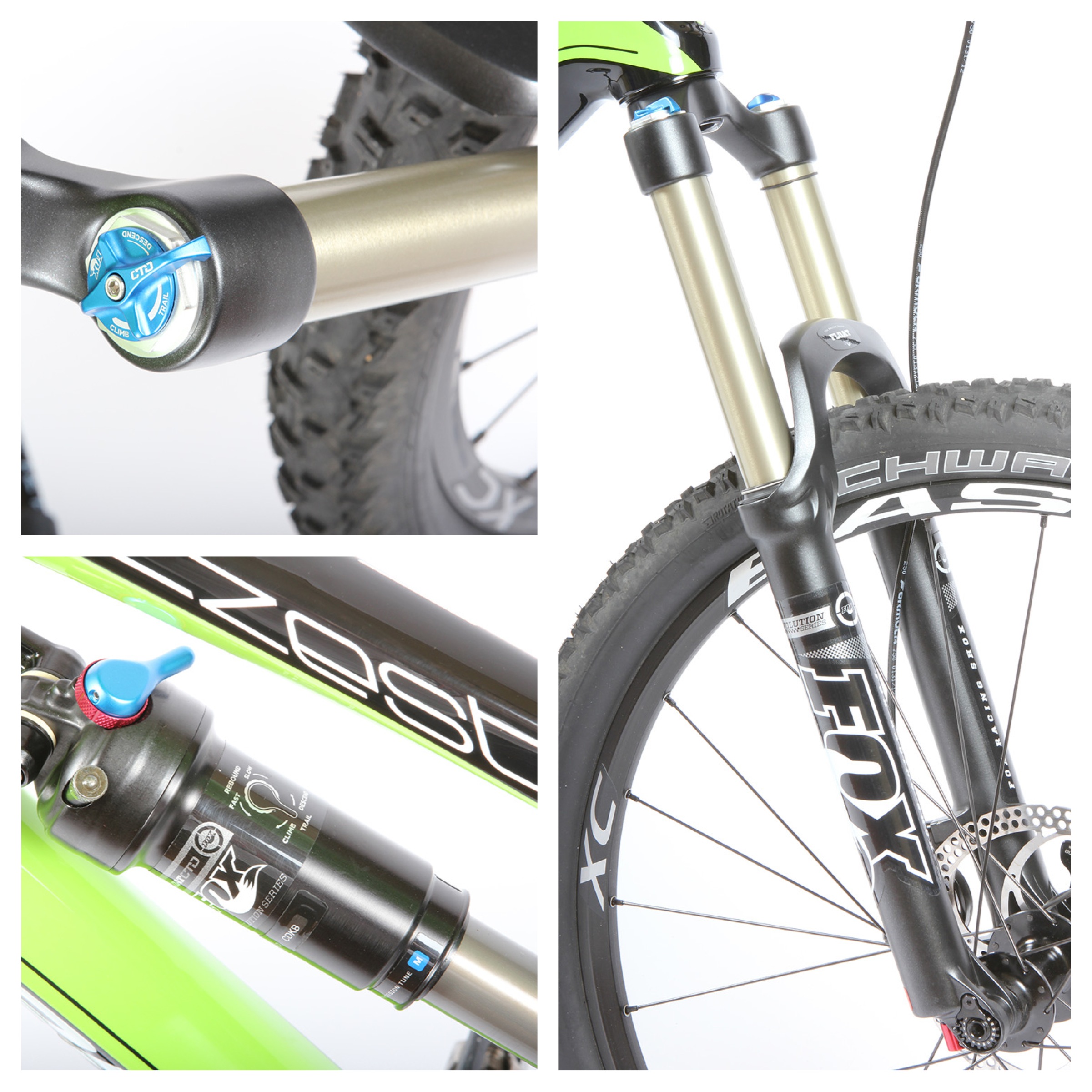 150mm seems to be the magic number for the 26” trail bike these days, but we were slow to pick up that the Zesty is only 140mm on the rear and 150mm up front; we would have been convinced that there was more travel out the back. Modifications from the 2012 Zesty include a longer travel fork, a 142x12mm bolt through rear axle, longer chain stays and a steeper seat tube angle. These revisions sound like the perfect tweaking to us. And who better to have a hand in designing the finer details of suspension tuning and geometry than ten-time World Downhill Champion; Nico Vouilloz. The meticulous and wildly experienced Frenchman will also be racing the Enduro World Series aboard the electronically damped Spicy and Zesty for 2013/2014.

Lapierre have applied their OST+ suspension design to three 26” full suspension platforms, the Zesty (140mm), Spicy (160mm) and Froggy (180mm). And interesting to note, that these bikes have been unable to be sold into the USA due to the Specialized FSR patent until now (FSR patent has ended). What makes this design work so well is the rear axle path, where the rear wheel moves up and away slightly in the early stages of compression. This helps to prevent the rear end from squatting into the rear travel as the riders pedalling forces applies tension to the chain. Some bikes have more of this stiffening effect than others, but we feel that Lapierre have got it just right here, a spot on compromise between plushness, sensitivity and pedal efficiency. The balance from front to rear is also a highlight, and even when bouncing around in the car park, the fork and shock compress and rebound in perfect unison, and even better on the trail.

Construction is big, burly and tough. Some of the fattest frame tubing you’ll find on a carbon trail bike are found here, especially out towards the rear end. Using a quick release actuated 12mm axle, the rear wheel is securely held in large carbon dropouts. The rear derailleur is also mounted with Shimano’s new direct mount system, which negates the need of the fragile replaceable dropouts.

All the cables are internally routed, love it or hate it (time consuming to work around) it does look nice, but needs work to tidy it up from new. The rear brake uses a disconnect able hose to help proceedings if brake changes are needed.

Geometry wise, the Zesty would be often referred to as a ‘bit of a mad shredder’. In English, that means that we feel the Zesty is geared towards tearing apart fast trails by cornering hard and aggressively. 66.5 degrees is a low number for a head tube angle, more like a downhill bike of only a few years ago. But slacker is definitely not better, some riders may find it slightly cumbersome to climb uphill switchbacks for example, but the trade-off is obvious when the descending speeds are high when the stability is confidence inspiring.

If we were to pick the best thing about this bike, it would be the way it tears through a corner. We won’t bore you with what geometry numbers are the cause of this, but if you were to throw a Zesty into a fast, rough, or loose turn you’ll be out the other side before you can say “phffroaar!”.

With 140mm of rear travel, you don’t seem to lose contact with the terrain, like some bikes do. Rather than isolating the rider too much from what is underneath, the ‘quality over quantity’ theory means that you can pump speed out of the terrain whilst still remaining comfortable and grounded. Testament to how active the rear suspension is how much the rear shock gets a serious workout, we have reached the bottom of a descent to find the shock body so hot, too hot to touch even.

It didn’t take us long to start swapping out parts on the 514 Zesty, the tyres weren’t going to seal up as tubeless, so we fitted a set of XTR wheels and tubeless ready Schwalbe Hans Dampf and Racing Ralphs. Brakes came from Italy in the form of the Formula RX, their mid-range model. They performed ok, but the snappy lever feel and braking power were not up to the standard of some Formulas we have sampled recently, plus the bed-in period takes a very long time before they are biting hard. Shimano handled the drivetrain, but the SLX shifters coupled with the bendy cable routing made for some fairly mushy shifting action, a bit of cable trimming and lubing helped, but the Zesty is dying for a single ring conversion to tidy up the front derailleur cabling eyesore going on.

Upgrade time. First up were the tubeless Schwalbe tyres and super duper ENVE AM wheels, then a FIT damped 34mm Float fork and a Boost Valve Kashima shock to match. An adjustable seatpost from Rockshox and the premium Formula T1 brakes. Wider bars and our fave saddle; Specialized Phenom. The shifters and drivetrain remained.

The Lapierre’s first excursion was to the Flow Rollercoaster gravity enduro at Stromlo Forest Park, Canberra. An event with shuttle uplifts to get the riders up to the good bits, then you race a 10 minute descent with a few climbs and sprint sections in there to keep you puffing. With such supple suspension and enough room in the top tube for a lot of body language, the Zesty relished in being cranked hard over hectic rocks and braking ruts. It is a really fine attribute to the performance of this bike, how well it can keep speed up while taking big hits. It loves to pull a power wheelie – where you yank on the bars, lean back with the front wheel just off the ground and pedal like mad in a fairly hard gear. Pulling out of corners hard on the pedals the Zesty won’t jump forward with stiff suspension like some bikes do, it rather holds itself high in the travel but not too stiff, allowing the shock to still react to any hits the rear wheel is subject to. 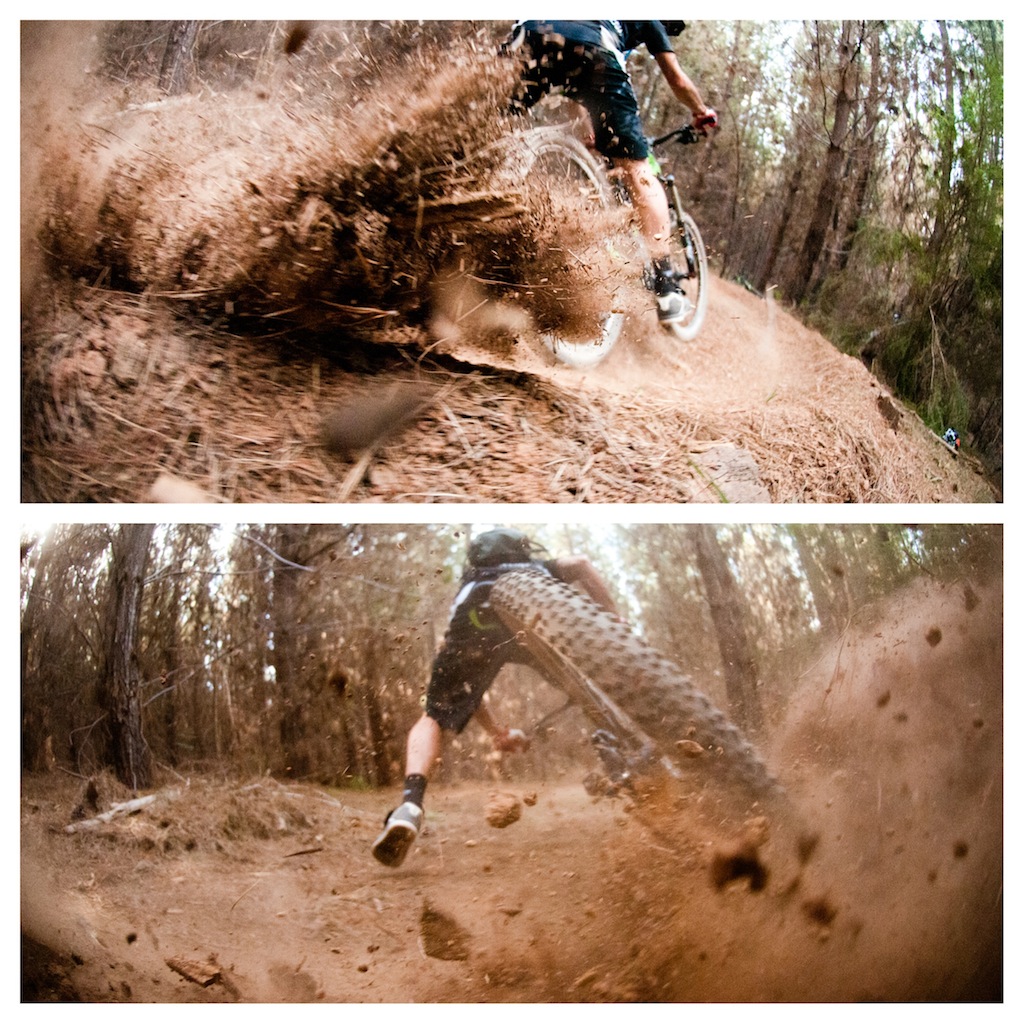 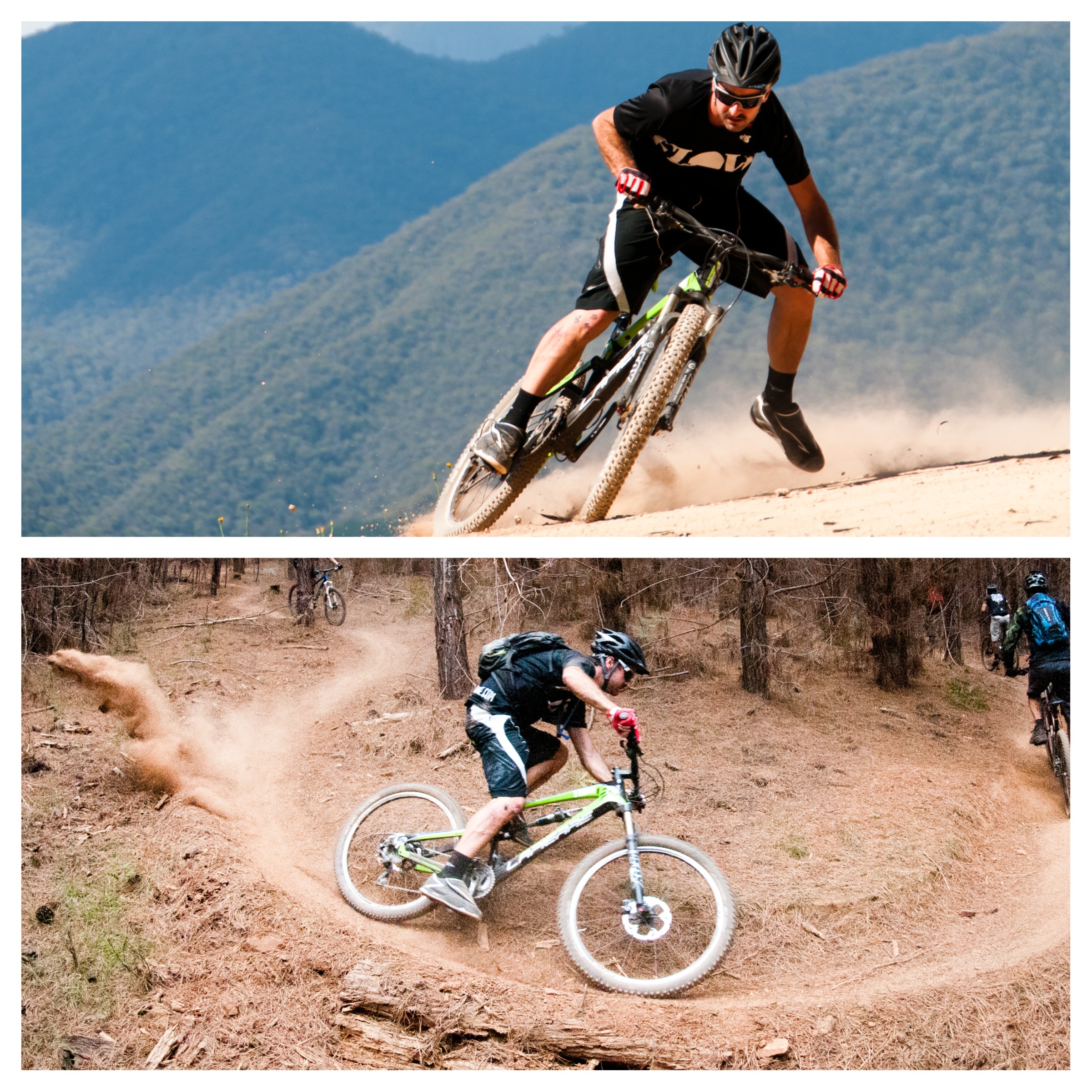 The Zesty was a real winner on Flow’s Bike and Brews trip to the big Victorian Alp riding destinations of Beechworth, Mt Beauty and Bright. The slippery surfaces of the Beechworth Mountain Bike Park were where we got a great feel for how the Zesty corners – and holds very confident drifts and promotes real hooligan riding. What makes a bike able to be drifted to consistently? A few things; including a balanced and even weight distribution between front and rear wheels, low handle bar height, front and rear end rigidity and a low bottom bracket. Presto, the Zesty is one of the finest bikes we’ve ever had the pleasure of letting slide around corners, both a fast and fun way to turn without using too much braking. That day in Beechworth will be remembered as the day we fell in love with the two-wheeled drift all over again. 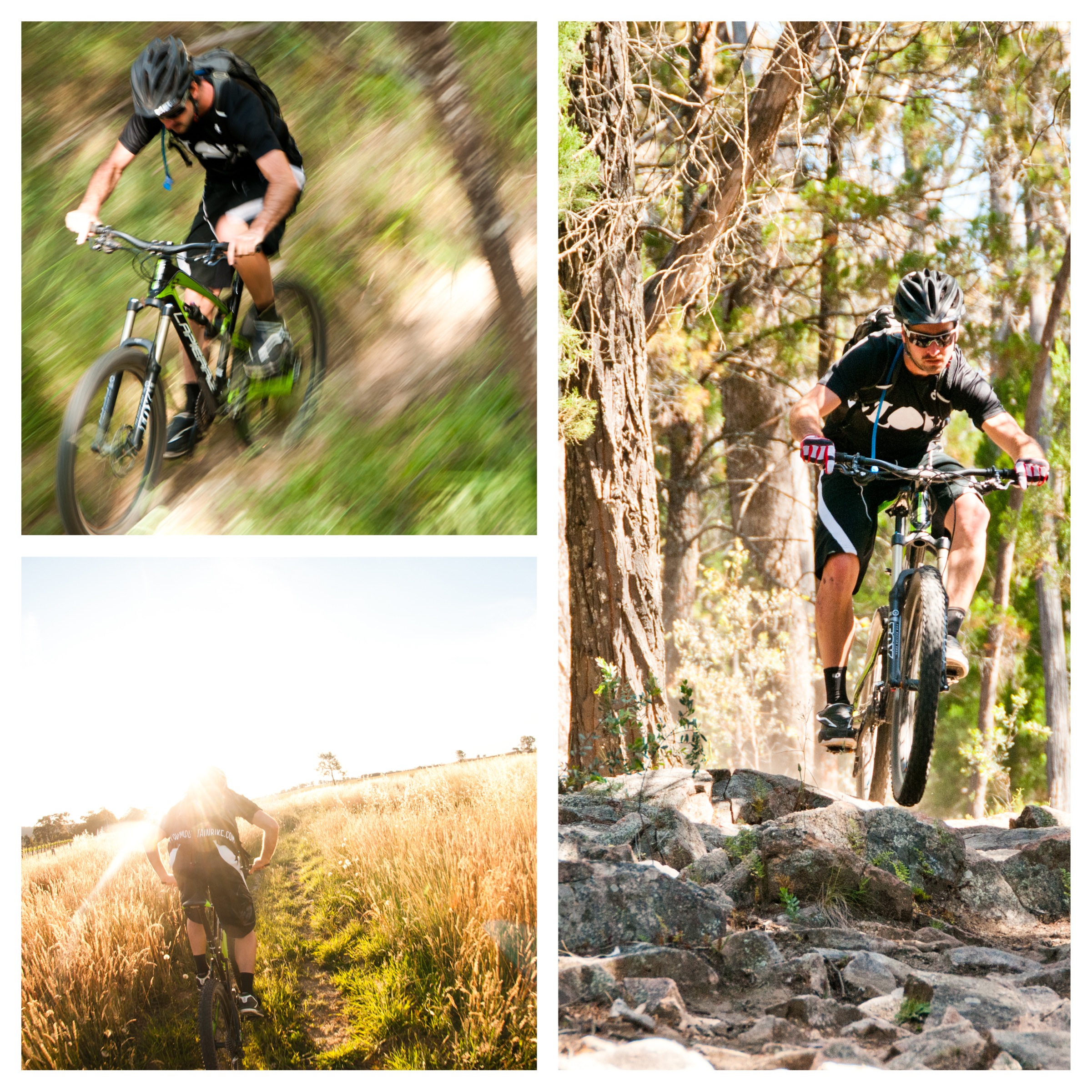 Flowtorua over Easter in New Zealand took the Zesty to the heavenly trails of Rotorua and Taupo. Oh dear, that was a good experience. With a pair of the premium ENVE AM wheels and a Rockshox Reverb adjustable seatpost, the Zesty was pushed harder than ever. There’s nothing like heading into a four-foot high berm with amazing confidence, laying off the brakes and coming out the other side with way more speed. Rotorua was also a good time to get the Zesty into the air, with about a billion natural and man-made jumps to send you skywards. Needless to say, that this bike was a calm and capable jumper. Whilst you could take just about any bike to Rotorua and have a ball, this style seemed to suit the higher speed and rougher trails just fine. And that 140-160mm bike was very common amongst the locals that tore about the place twice as fast as us.

At the end of our testing term, the Zesty had many modifications to milk out the most of what we believe is one of the highest performing suspension bikes that we’ve ridden. For those looking for a bike to be ridden fast, jumped far and cornered hard, the Zesty will not have any problem in lifting the game. Dialled geometry, fearless rear suspension and solid construction are what makes this French number one of our most favoured of all time.