After six months of going up and down, the high quality adjustable post from the classy folk at Thomson has never missed a beat.

Sure, it has an external cable but that is not always such a big deal for us. An externally routed cable can be a bit of a pain with some bikes, especially if a direct route isn’t possible due to a rear shock placement or convoluted frame shapes. We tested the post on a Yeti SB66 Carbon and it was nice and neat, it did mark the frame a little as the cable moved up and down with the seat, requiring some protective stickers on the nice carbon finish.

If you’ve ever experienced setup and fitment woes with an internally routed seat post, you’ll understand why it was a nice experience fitting this post, taking only about 20 minutes. But there’s definitely merit in the cleanliness and simplicity of the internally routed posts. 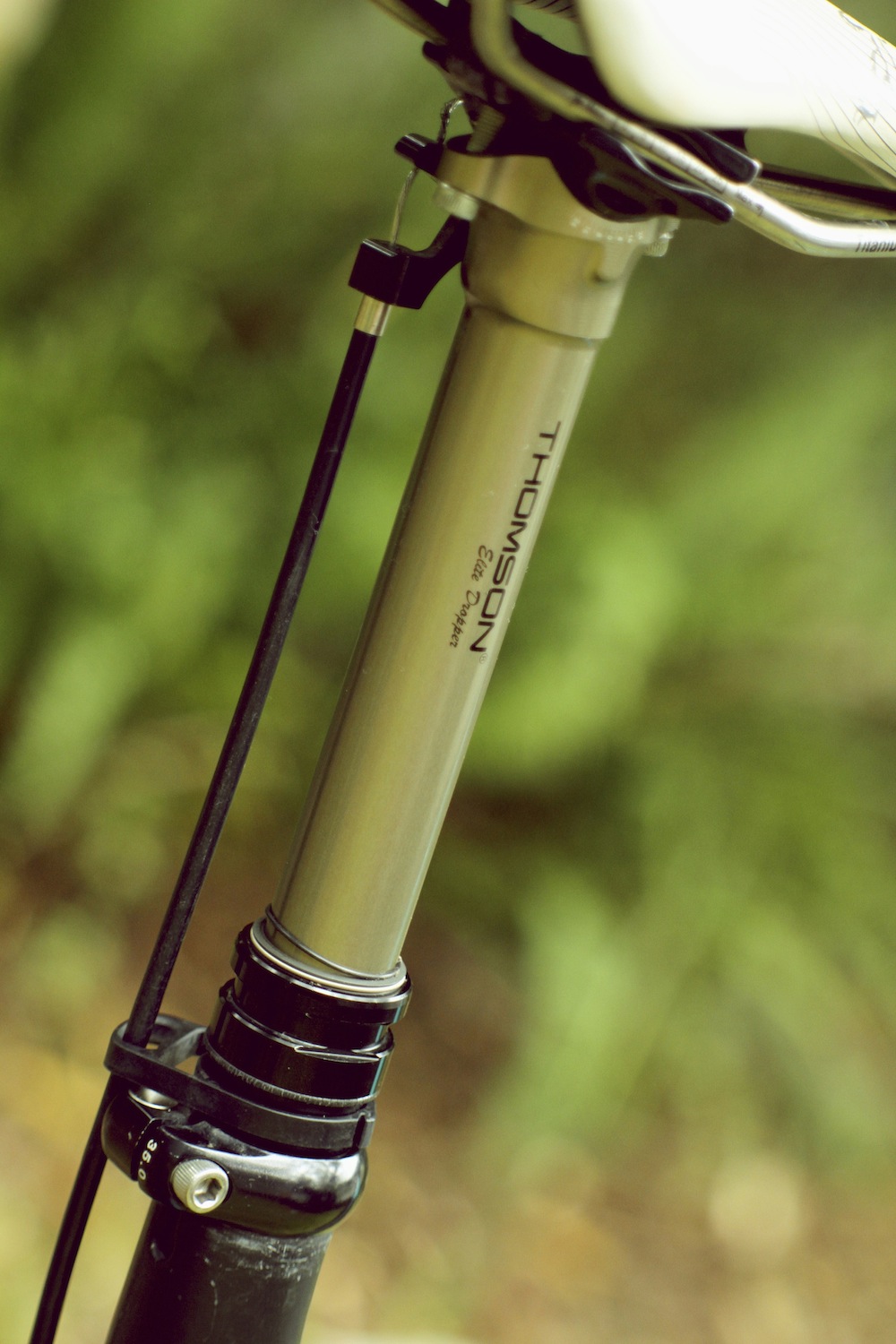 What matters the most is how the actuation of the lever works, a good slick action, and durability in the bushings. And that’s where the Elite Dropper shines. 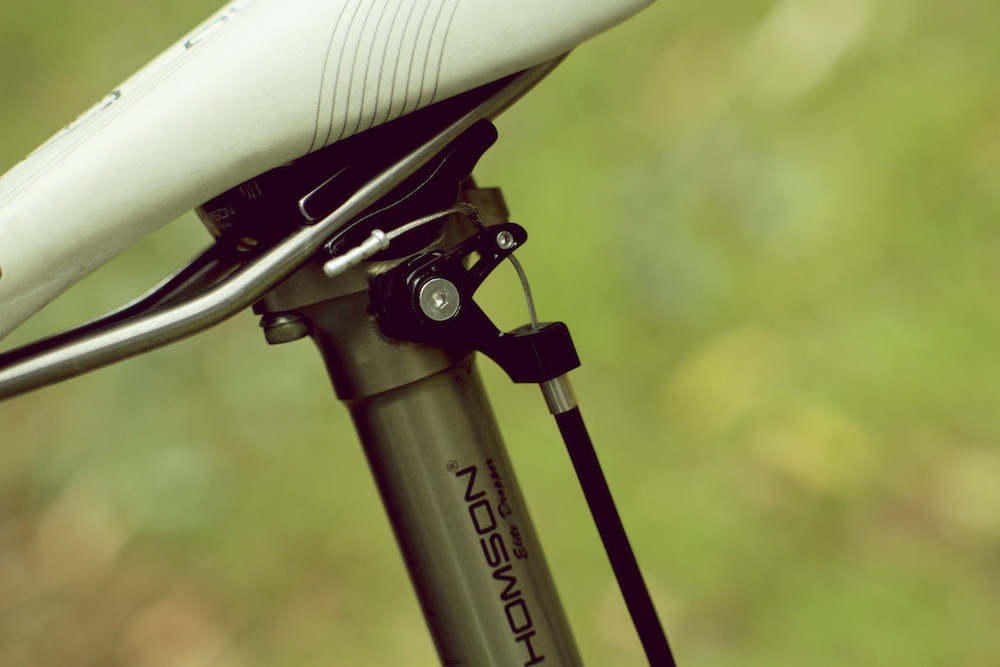 Many posts over the years have battled with the development of side to side play, twisting, rattling and a knocking feedback when pedalling. It’s a tricky challenge to overcome, for sure. We’ve been more than happy with how this particular dropper has only slightly developed a very acceptable amount of wear, after a good amount of use. And it’s definitely not something you notice when riding. 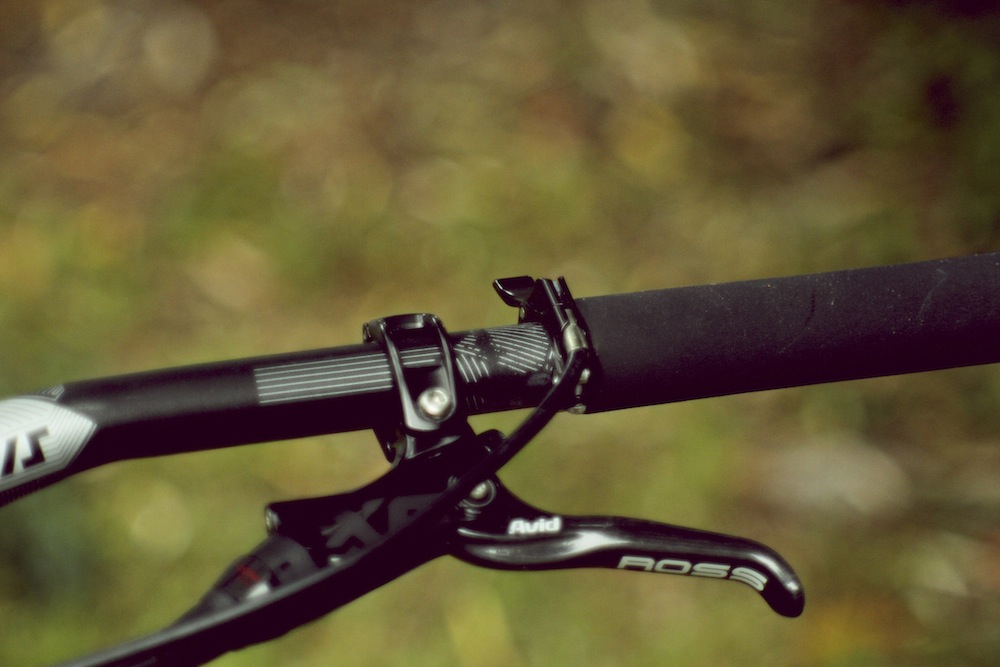 We never once encountered a moment when the seat post didn’t actuate either up or down, in wet or dry conditions. Our only gripe we found was the threaded collar that threads the seal down on the post body would unwind each ride, we tried a touch of thread locking solution, but it still crept up. Looking for a better solution we cleaned the threads, dried them and cranked it down harder with thread lock and it seems to have stopped it from unwinding.

The price has dropped too (dropped, ha), from $590 to $440 which is very fair, and also if purchased from a Thomson dealer in Australia, a free first service is included.

Thomson are soon to release an internally routed post with an improved thumb lever, due in Oz in April, that could just be our favourite post ever.

Side mount of actuation mechanism means we can keep all the critical dimensions of the Thomson Elite cradle, bolt and clamp geometry. One piece forged inner post for strength and reliability, no joint to loosen and fail. Actuation is by cam so rider gets smooth, variable speed and height without resorting to a complicated, damage prone hydraulic actuator; no bleeding required.

Return speed is damped in the last 15mm of upward travel to be gentle on your “seating” area!