Old name, new game. The 2016 Specialized Stumpjumper FSR is hotter than the surface of the sun, and boasts some pretty cool features. It is hard to believe that a bike that we’re so fond of could be improved, but here goes.

For 2016, the Stumpjumper FSR tightens up its geometry numbers with an even shorter rear end for snappier handling on the trail, it scores some classy aesthetic improvements and at a complete surprise to us, an internal SWAT Door compartment storage system on the carbon models.

Internal SWAT Door? Yep, it’s like a glovebox in your downtube, with enough space for an inner tube, mini pump, Vegemite sandwich and a couple Space Food Sticks. Specialized’s plot to rid us of the need to ride with a backpack steps it up a notch.

Gone are the ‘in the middle’ Stumpjumper EVO models for 2016, just the three wheel size options with the 650b taking over the slightly more aggressive role on the trails.

Flow was lucky to take part in a super-secret testing session on the new Stumpjumper in Rotorua, NZ. We rode the hell out of the bikes, and made the most of the opportunity to to chat in detail with the actual designers behind them.

Before we get to the SWAT bit, let’s take a look at the highlights to the new 2016 Stumpjumper’s chassis.

– The Stumpjumper 650b receives its own dedicated frame. The 2015 model was effectively a 29″ Stumpjumper main frame adapted for 650B wheels.

– No more Specialized Brain Shocks on Stumpjumpers. The special inertia valved Brain shock will stay on bikes like the Epic and Era.

– The women’s specific version – The Rhyme – in 650b wheel size only receives all the sweet updates as the Stumpjumper FSR. The sizes available are able to fit rides from 4’10” up to 6″ tall.

– A shorter chain stay length. This is achieved by a combination of a few things, most notably the use of their Taco Blade front derailleur mounting design (debuted on the Enduro, with its category leading short rear end) and by removing the bridge between the seat stays (yep, no seat stay bridge!).

– Dropper posts and wide rims on ALL Stumpjumpers, too good!

If you’ve ever lived in a small apartment you would know how important storage is. Finding any unused space for stashing your stuff is a real challenge, there is only so much crap you can jam under your bed!

Specialized are calling it a groundbreaking feature and we’re certainly with them on that one. When we walked into the room to see the new bikes nothing would have prepared us for what we saw on the downtube; a glove box.

By manufacturing the frame in a way that a large opening can be moulded into its down tube, Specialized were able to open up a whole lot of space inside the largest part of the frame, for the sole purpose of storage. Crazy, clever and mighty handy! It’s all part of their Storage Water Air Tools (SWAT) concept. The whole system is seriously well done, and we can only begin to imagine how much would have been involved in interrupting the shape of the largest tube in the frame without sacrificing strength or rigidity. Specialized say the SWAT Door took nearly five years to develop.

You could put whatever you want in there (perhaps a pigeon?), but demonstrated here is the S-Works SWAT kit.

The water bottle cage screws into a flat and wide plastic door on a hinge, and the door clips positively into place with no hint of a rattle when riding. Inside the frame the carbon is immaculately smooth, the internal cables are housed inside moulded piping, and a little plastic net clips into place at the bottom to stop anything from dropping down too far towards the bottom bracket.

SWAT Door, used in conjunction with a water bottle cage, Specialized SWAT clothing items (liner shorts with loads of pockets, and a vest for the ladies) and the clever chain tool headset nut, and allen key set clipped into place above the rear shock, you have enough storage and tools for a ride. It might not suit longer epic rides where more water or clothing is needed, but if you like that feeling of riding with nothing on your back, this will make you happier than ever.

At Flow we are divided: some of us are devoted Camelbak wearers, and some can’t ride any bike without a bottle cage. You have certain limits with just carrying water in a bottle on your bike or in your SWAT bib shorts, so perhaps the SWAT concept is best suited for short blasts in the woods rather than epic rides.

As long as the weather didn’t change too much, or we ran out of water, it was a free, refreshing and lightweight feeling to ride without a backpack, no doubt about it.

With the horrid task of testing the new season bikes on Rotorua’s dreamy trails, we took out both the S-Works Stumpjumper FSR 650b and 29 for a rip around.

First up we straddled the 29, with the bigger wheels the travel a little shorter than the 150mm travel 650B version, with 135mm in the rear and 140mm up front. We’ve been huge fans of the Stumpy 29 over the last few years, it pretty much sums up what we like about a trail bike and manages to reap the benefits of 29″ wheels without the downsides. Click here to see our review of the 2013 version.

Skimming through the fast and flowing trails in the Redwoods, the Stumpy 29 instilled confidence and efficiently handled anything in its path, no surprises there. What did amaze us though was when the trails turned into jump lines, with table tops, doubles, and fast berms as far as the eye can see, we forgot we were on a 29er and nailed the lot. Nosing into landings, popping off the lips and railing turns on the edge of the tyres the Stumpy 29 really had us pleasantly surprised.

The 29er really shone when the trail surfaces weren’t exactly friendly. Slippery roots, loose surfaces, and rough braking ruts were handled easier than on its 650B brother.

We would even go as far to say that if we were racing the Enduro World Series race on the same trails we were testing, the 29er would be our pick. The 29er delivers real confidence on the trails.

The new Stumpjumper 29 is slacker than its predecessors (the 2015 version had 69 degree head angle, while it is now 67.5 degrees), and the chain stays are a whole lot shorter too, dropping from 450mm to 437mm across all sizes. The bottom bracket also drops a couple millimetres.

For a 29er those are some pretty slack numbers, and with the leaner Specialized Camber and burly Enduro on either side of the Stumpjumper, it seems to really have found its place in the lineup as a go anywhere bike with a playful nature.

Riding the Stumpjumper FSR 650b

Smaller wheels, wider eyes, the 650b Stumpjumper was what we really wanted to spend time on while we had the chance. We were mighty curious about this one.

Specialized had a bit of a wobbly start with the whole 650b wheel size thing, hanging onto the ‘one wheel size is best’ mantra for a very long time, focussing whole heartedly on the 29″ wheel for the majority of their range. In fairness though the excellent 29ers they were producing when the debate was running hot were just how you would want a great bike to ride, so perhaps they weren’t in such a hurry as most brands were. As you’d have it, consumer demand for 650b increased, and Specialized released a 650b Stumpjumper that rode well but still felt a little like a half measure, with an obvious compromise in its construction – a spacer under the headset to adapt what was essentially a 29″ front end with a new rear end.

What they’ve done for 2016 is give the Stumpjumper a real leg up into the new school world, and it charges a whole lot harder than before. With 150mm of travel front and back, a very short rear end, slack head angle, long top tube/short stem and the new Rx tuned rear shock this bike seriously rips. And we absolutely loved riding it! 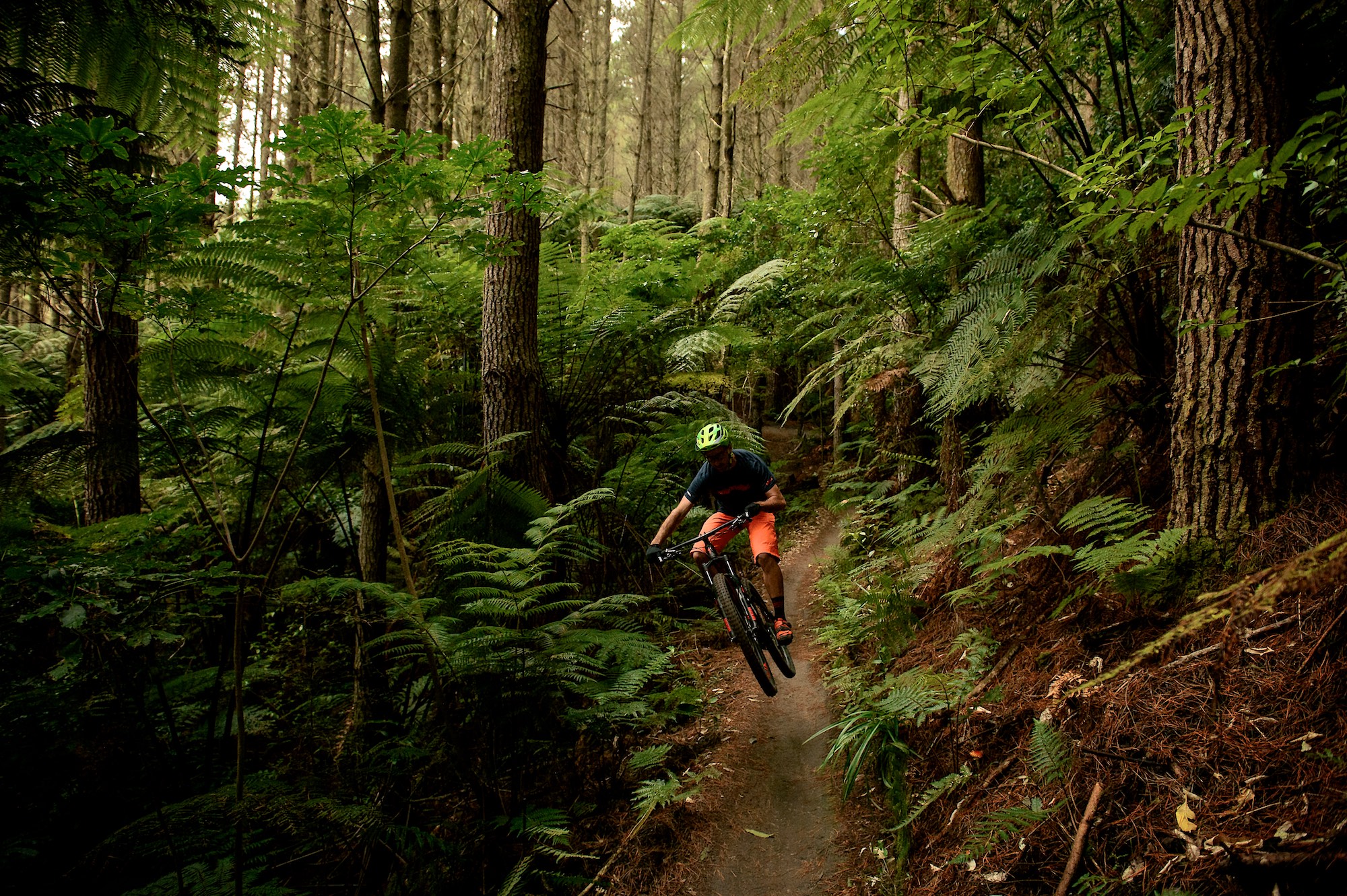 Jumping off the S-Works 29er onto the S-Works 650B the trails felt very different to ride indeed, not so much easier or faster, we were just able to ‘let it hang out’ a bit more and that’s more our style, but of course not everyone’s.

We laid the bike right over onto the sides of the tyres, spent more time drifting with a foot off the pedals and the smaller wheels made those tight turns and quick decisions happen with a real snappy action.

150mm of travel is a fair bit, and only a few years ago this amount of travel was one stop short of a downhill bike. But we’ve come a long, long way and what you can do with a bike with this amount of bounce is crazy, but even crazier when you don’t feel like it is holding you back one bit when you don’t need it. On the buff and smooth trails in the Rotorua forest the FSR’s efficient suspension came into its own, and switching the FOX rear shock’s little magic blue lever would help us make light work of tough climbs.

Geometry wise the Stumpy 650b runs a 67 degree head angle, one notch slacker than the 2015 model and the chainstays trim off a whopping 15mm down to 420mm. A criticism we had with the 2015 Stumpjumper 650b was the super-low bottom bracket, it turned on a dime with such a low centre of gravity, but we had to take too much care to avoid bashing our pedals on the trail below. The new version lifts the bottom bracket up from 327 to a more acceptable 335mm.

With the removal of the EVO models from the Stumpjumper line, the message is simpler to the consumers, and the 650b fills the space nicely with its hard-charging attitude and beefier appearance. 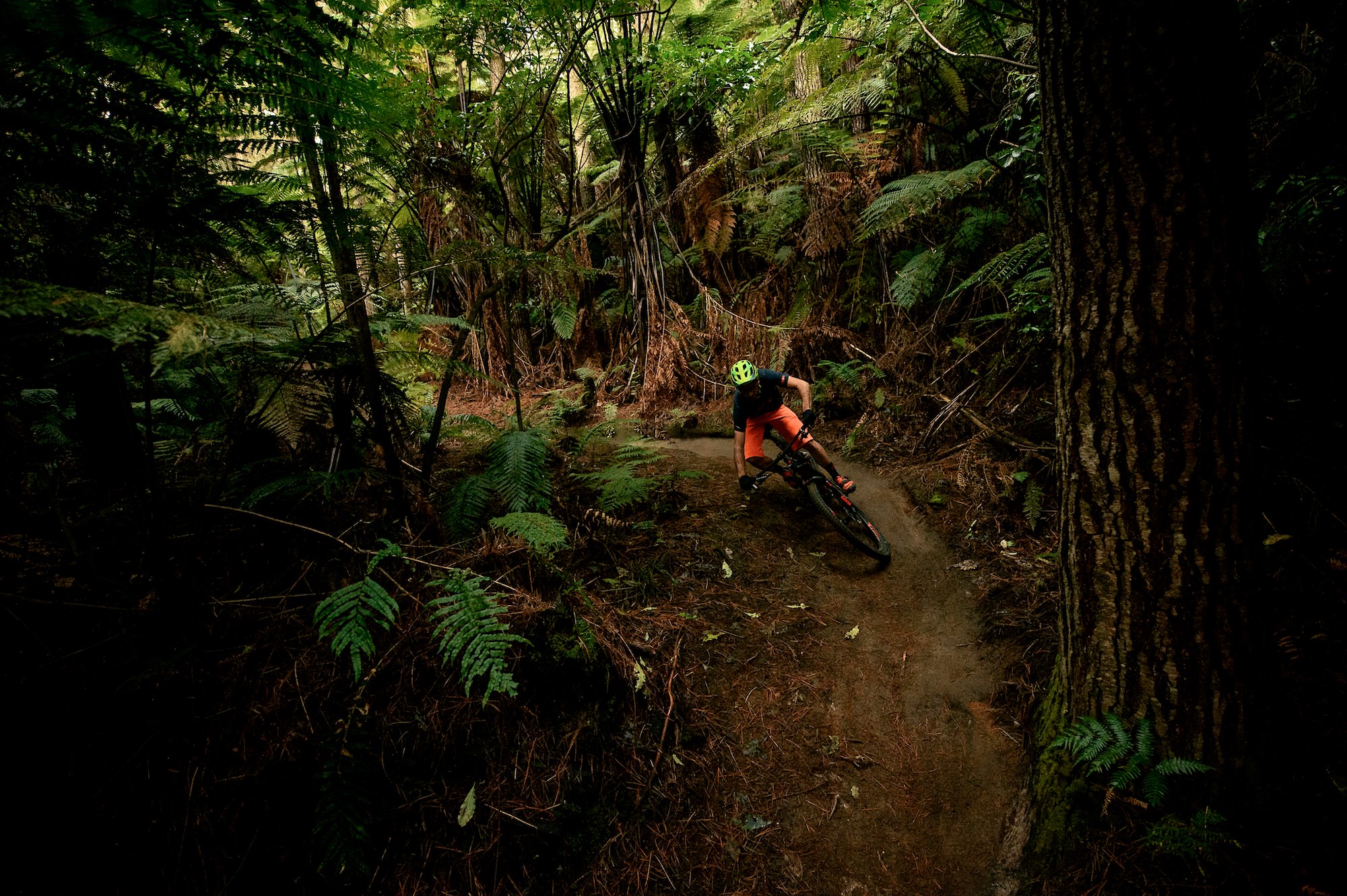 When we heard that Specialized was releasing a new Stumpjumper we hoped we’d see at least two things – a shorter rear end using construction methods like the Enduro, and a dedicated 650b version. Well, that happened and more. The SWAT Door feature is really clever and could be very useful, and the internal cable routing finishes off a stunning bike in a classy fashion. They ride like a dream, come in a variety of price points, and are pretty hard to fault.

While the two variants of the Stumpjumer are aimed at one thing – trail riding – having a choice of wheel sizes is excellent, as not everyone wants to ride the same trails the same way.

Alongside the Stumpjumper came the release of the women’s specific Rhyme (read about it here) and the semi-fat Stumpjumper 6Fattie (here for more). For pricing and availability, wander in to your local Specialized dealer, they’ll know what’s up. The guy below sure knows what’s up. 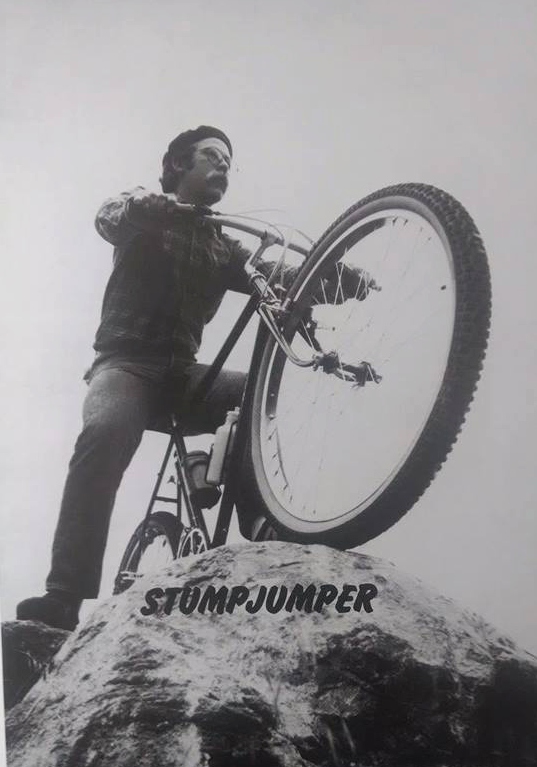