Very efficient for a long-travel bike.
Suspension design is both supportive and smooth.
Steep-ish geometry will appeal to the trail rider looking for more travel.
Excellent value for money.

Here in Australia, the name ‘Breezer’ is most commonly associated with an alcoholic beverage favoured by 17 year old girls. There’s nothing fizzy about this Breezer, though just like the alco-pop, it is pretty sweet. 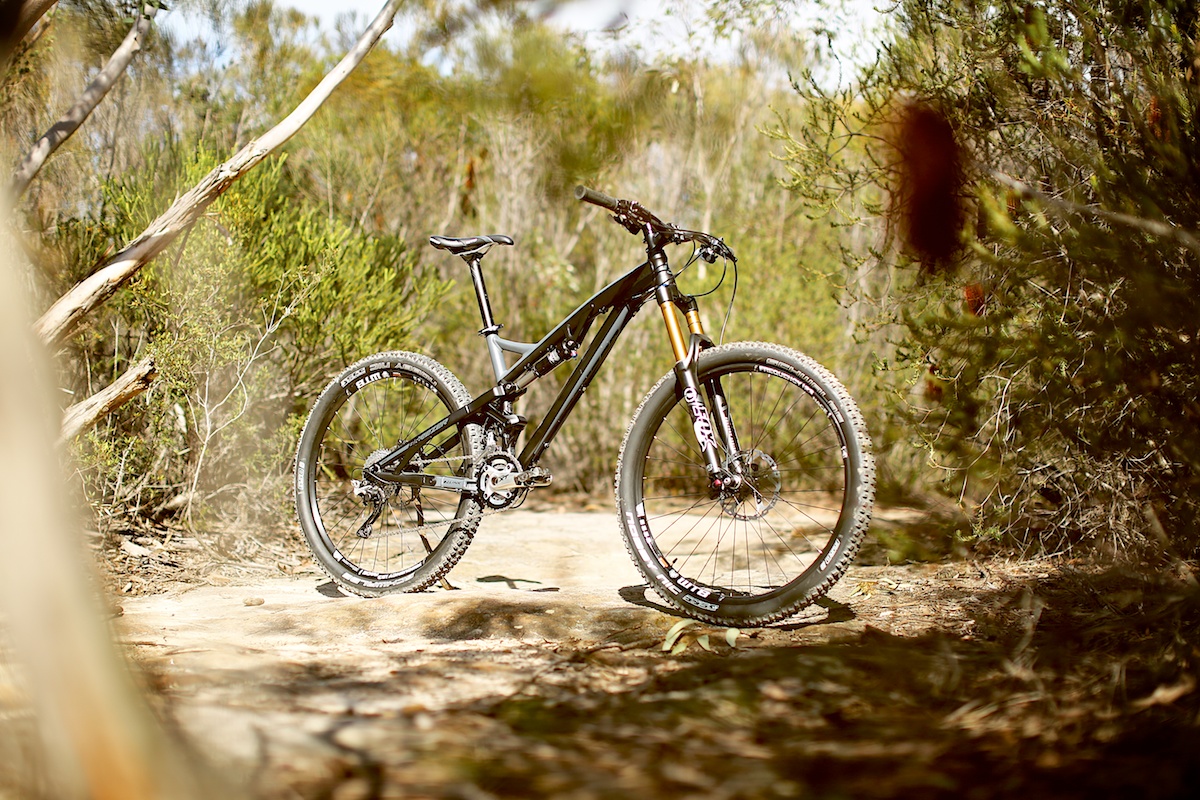 Joe Breeze is the man behind Breezer bikes. Widely recognised as one of the founding fathers of mountain biking, with a place in the Mountain Bike Hall of Fame to match, Breeze has a lot to say about bike design. While he’s been pretty quiet on the mountain bike front for a while, recently Breeze teamed up with the Sotto Group (the design team behind some of the industry’s best loved suspension designs) to launch two new bikes. There’s the 120mm-travel Supercell 29er and the bike we’ve been testing, the 160mm-travel 27.5″ wheeled Repack.

The Repack draws its name from the famous Repack downhill, a dirt road descent in Marin County, California that was the site of some the sport’s first legendary downhill races. The bikes’ coaster brake hubs would get so hot racing this famous descent, that they’d need to be ‘repacked’ with whale fat and moss to keep them from catching fire. Or something like that. Needless to say, the Repack Team has a penchant for the downward sloping stuff. 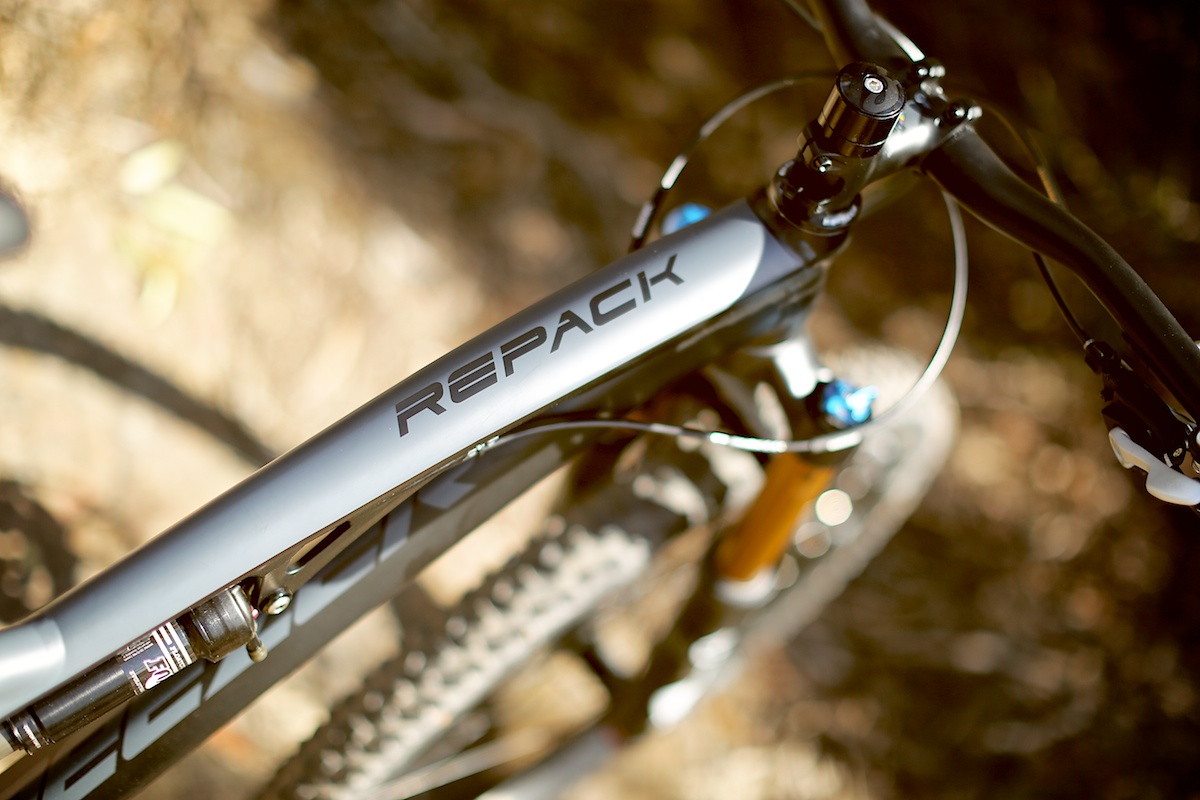 The full aluminium frame is a tough number and it comes fully featured with all the bells and whistles you’d expect, except for internal cable routing for a dropper post – there’s a press fit bottom bracket, 142x12mm rear dropouts (using a superb Shimano-made axle), low-stack internal headset. The cabling is all external for easy maintenance, running neatly tucked under the down tube. There are no water bottle mounts to be seen, so it’s pack-only.

There’s next to no flex detectable through the rear end, thanks to oversize axles and the whopping swing link securing the seat stay, and this robust construction is one of the real highlights. A waggly rear end is fine on a dog or a snake, not a trail bike. 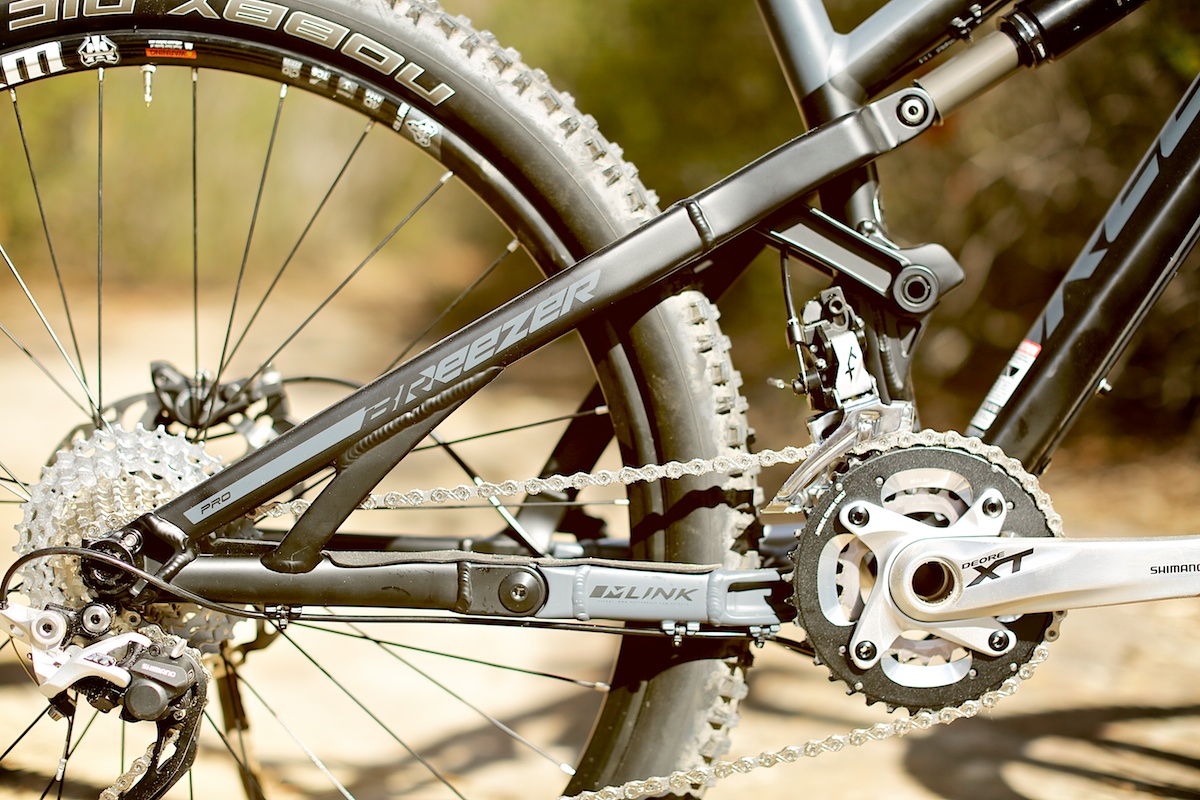 Rear wheel travel is 160mm, and the system that controls all the motion in the ocean is called the M-Link. It’s a very unique suspension arrangement – it’s a four bar system using a pivot midway along the chain stay, in contrast to a ‘short link’ system (such as Giant Maestro or Santa Cruz VPP) or a Horst link (for example, a Norco or Specialized). 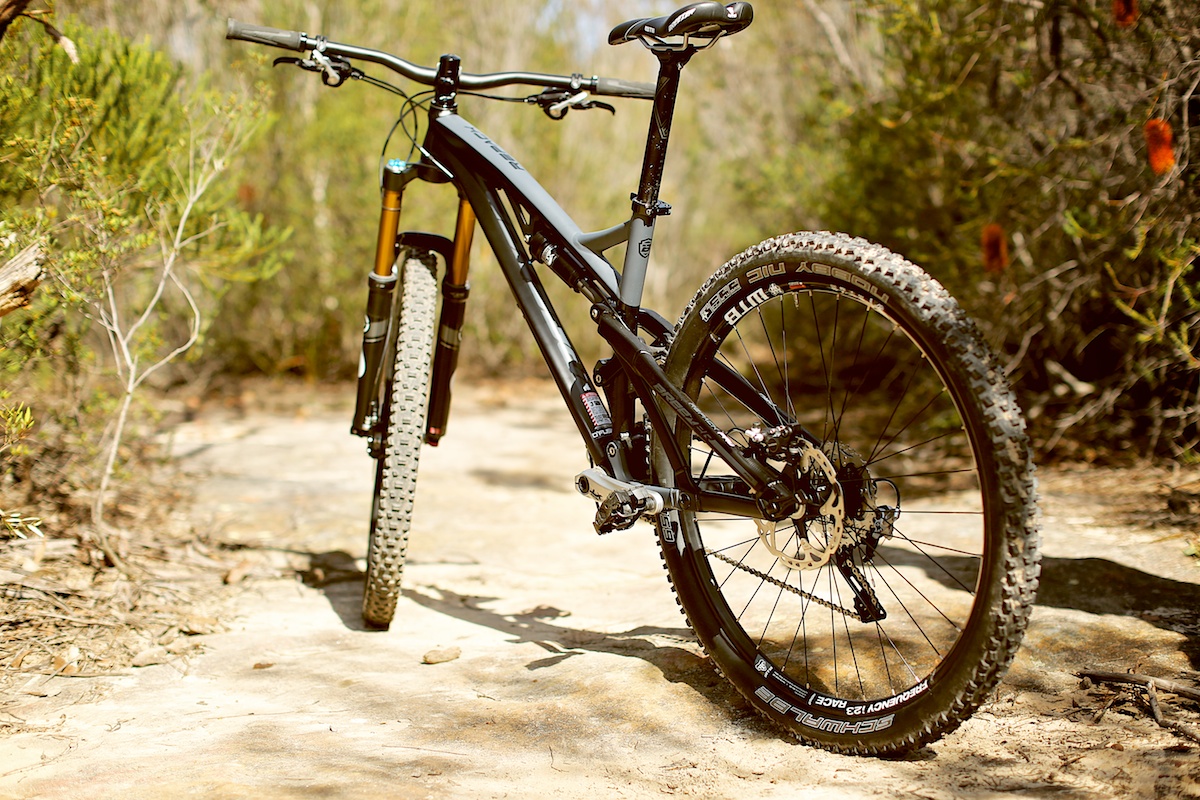 The geometry is quite unique too with a 68-degree head angle. That’s a full degree and a half steeper than is common on most bikes of this travel, but Breezer feel there’s a sound rationale behind this decision (see the graphic from the Breezer site below). The aspect that Breezer don’t mention in their explanation above is that a steeper head angle does tend to reduce stability at high speeds and confidence on steep descents. Can the Breezer hit the right balance? 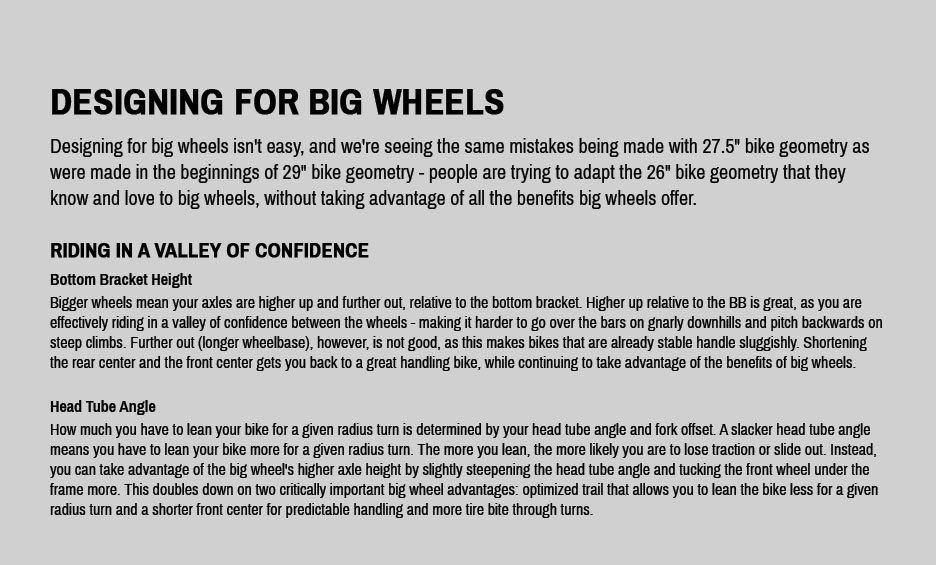 Our test bike was a size 17″, which Breezer classifies as a size small. We’d normally run a medium but this was the only test bike available, plus the top tube measurement is rather generous – looking at the sizing chart, it seems like the Repack runs on the long side across the entire size range. One immediate hitch we encountered was that the seat post was too short (understandable as it IS a size small), and getting the right seat height required some reckless disregard for the post’s minimum insertion mark. We ended up fitting a longer post, but because of the curve in the seat tube, there was only a small amount of adjustability available to lower the seat on descents. The easy answer would be to fit a dropper post straight away. Obviously this adds a few hundred gram, but it’s worth it.

Absence of a dropper seat post aside, the Repack is an incredibly well specced bike for its sub-$4000 price tag. The fork is a stunner, with a range-topping 160mm FOX 34 Factory CTD w/ Trail Adjust up front. Once we’d converted the WTB rims for tubeless (using Bontrager rim strips and sealant) the bike was pretty much perfectly equipped for its intended life on rough trails. On the subject of tubeless, this is an absolute MUST for this bike, as you’ll read more about in our Ride section below.

The Shimano XT drivetrain, brakes and hubs are just flawless workhorse items. While the Ritchey stem is infuriating to actually do up the bolts on, the bar/stem combo is stiff and perfect for the job. We didn’t feel compelled to make any other changes to get the most of the bike. As a lot of our testing occurred in damp conditions, the Nobby Nic tyres worked well. If the terrain had been drier, a tyre with a softer compound would’ve been fitted.

The Breezer is definitely more of a long-travel trail bike, than a balls-to-the-wall hard descending all-mountain bike. This is not a criticism at all – rather this bike has a versatility that most 160mm bikes lack, especially when it’s time to get back up the hill.

We’re truly impressed by the climbing abilities of the Repack it doesn’t feel like you’re pushing so much travel uphill. The slightly steeper head angle plays a part here, preventing the steering from flopping around as it does on most long-travel bikes, even without a travel adjustable fork. 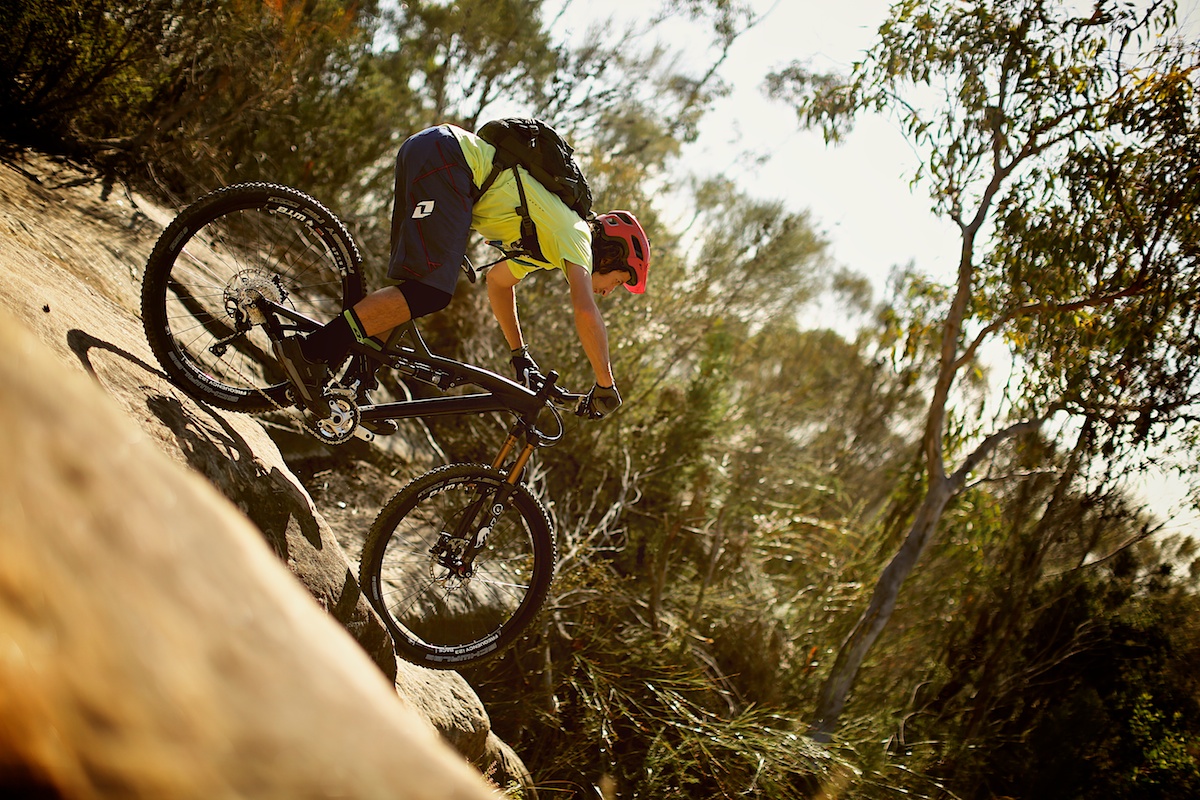 But the seated pedalling efficiency of this bike is the real drawcard when climbing – the suspension system has just the right amount of anti-squat, and it feels very supportive and resists bobbing. In the big ring or small ring, the Repack will tractor up the climbs without wallowing or wandering. We never felt the need to touch the shock’s CTD lever, not once. It’s fortunate that the Repack climbs so efficiently, as it’s not a particularly light bike. A dropper post will add more weight, and there aren’t many obvious areas for weight saving unfortunately. Most of that mass resides in the frame.

As well as being supportive on the climbs, the Repack is buttery on the descents. The FOX fork was typically sticky for the first couple of hours on the trail, and initially couldn’t match the smoothness of the rear end – the bed-in time on new FOX forks seems to be longer than in the past.

As mentioned above, the Repack doesn’t have the same predilection for reckless riding as some other all-mountain bikes, and this is partly due to the suspension action of the M-Link design. The spring curve is very linear, meaning the bike tends to use the last two-thirds of its suspension travel readily. There’s no real progressiveness to the suspension, and we found ourselves using the bike’s full travel very frequently.We didn’t notice any violent bottom-outs, but when we checked the shock after each moderately rough section of trail, we’d regularly note the o-ring had been pushed right off the end of the shock shaft. 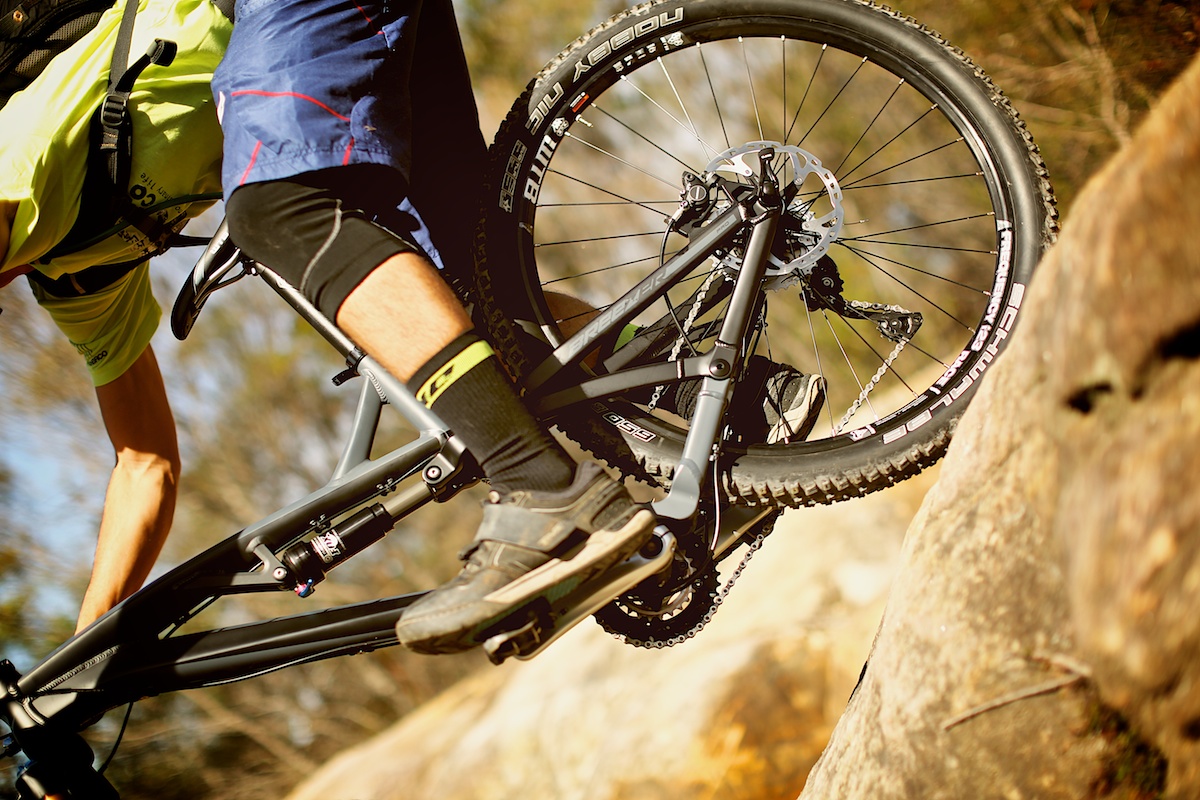 The advantage of this very flat suspension curve is that the get the full advantages of having 160mm of travel, even if you’re not really hammering the downhills. This means loads of traction, and a real feeling of ironing out the terrain. The tendency to run deep in the rear travel also helps slacken the bike out on the steeper stuff, which does offset the potential for ejecting out the front door. Disadvantages? The rear wheel takes a pounding! Our first ride end with a long walk after three flat tyres in a couple of hours. Technique may have played a role, but so to did the bike’s suspension curve. This is why we feel tubeless is an absolute MUST with this bike. Fortunately the tyres are tubeless ready, so simply fit your preferred rim strip and forget out pinch flats.

After flicking the Repack through some fast, flat singletrack, we could appreciate Joe Breeze’s opinions about geometry. The Breezer doesn’t push the front wheel at slower speeds like a lot of long-travel bikes. But then again, it doesn’t encourage you to point-and-shoot either. It’s horses for courses, so think about what matters most to you. 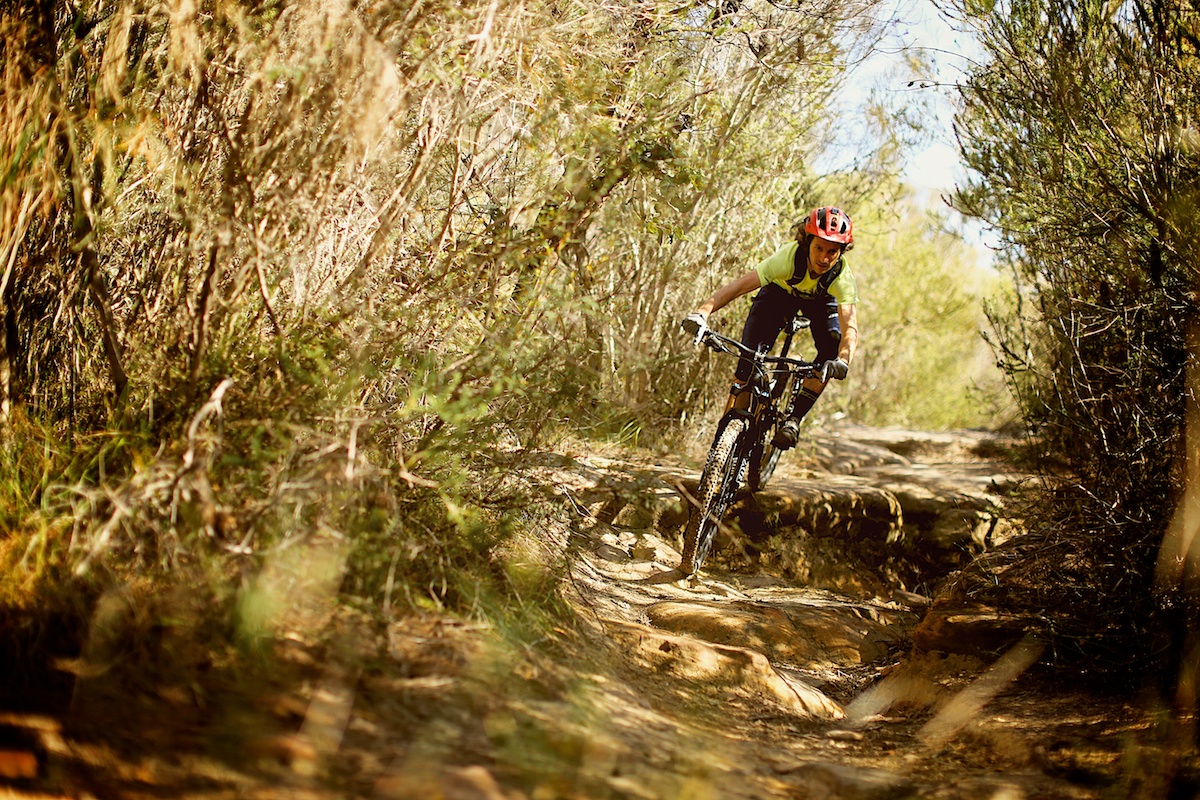 The Breezer Repack was a really great bike to review, if only for the fact that it has its own identity, its own take on all-mountain geometry and a whole new approach to the four-bar suspension system. It does a great job of making longer-travel bikes relevant to riders who aren’t interested in piloting a boat around the trails, and it will certainly appeal to those who prioritise control, traction and comfort over flat-out descending. Set the wheels up tubeless and get yourself a dropper post – at this price you’ll likely have the cash left to spend – then hit the trails.