Tyres are not up to scratch.
Lefty still feels overly damped.

It was the second time that we found ourselves lying in the dirt laughing in pain that we decided we really liked the Cannondale Habit SE. Counterintuitive it may be, but often it’s the bikes we crash the most which we like the most. A bike which is digs you in the ribs and says ‘you know, you could probably double that up’, ‘there’s an inside line there’. A bike that’s the devil on your shoulder – that’s the Cannondale Habit SE all right. 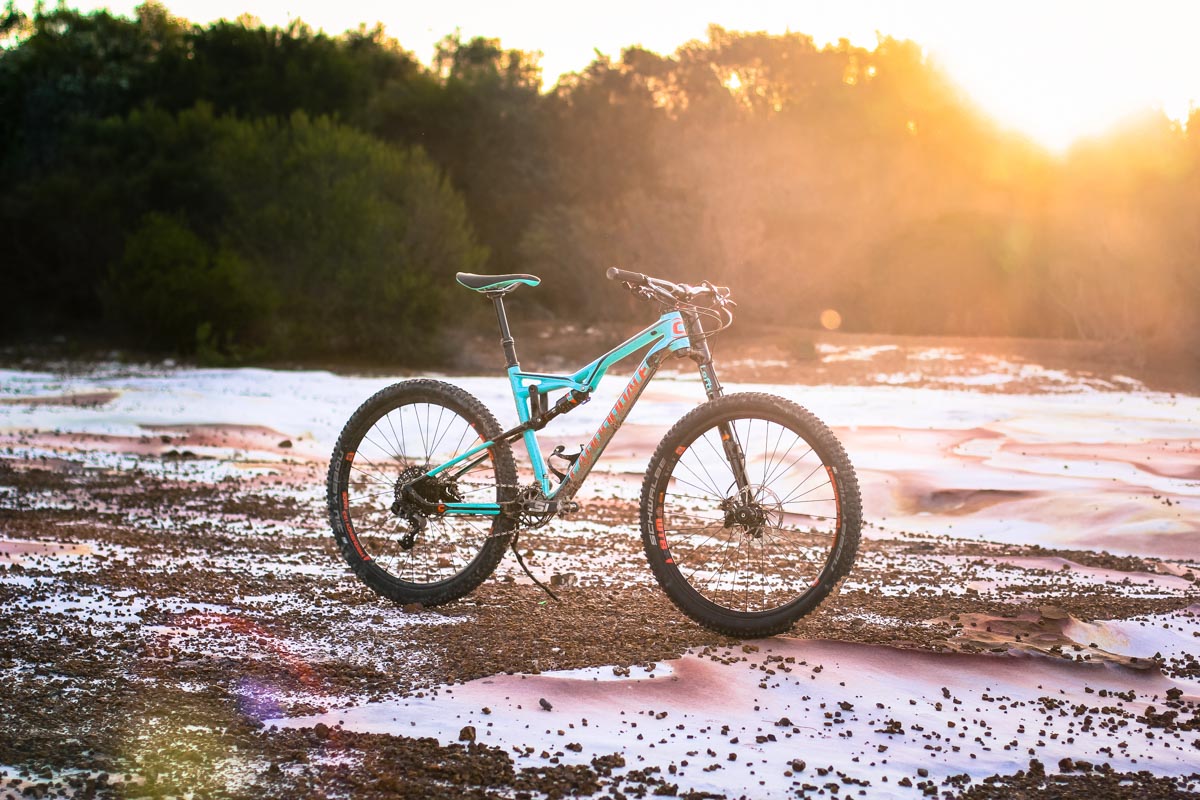 The Habit is a bike that excites us, and puts Cannondale back up where it ought to reside in our esteem. You see, we’ve always adored the raw racing aggression of the Scalpel, but when it comes to bikes for the larger trail-riding market, we don’t feel that Cannondale has been on their best game until now. The Trigger series which has filled this niche for C’dale over the past couple of years is certainly capable, but it never dunked our biscuit like we wanted. Nice bikes, but the weight and complication of the FOX DYAD shock seemed unnecessary, and the previous version of the Lefty was tough to get along with.

And now here’s the Habit, which on paper might read a lot like the Trigger, but on the trail it tells a different tale. 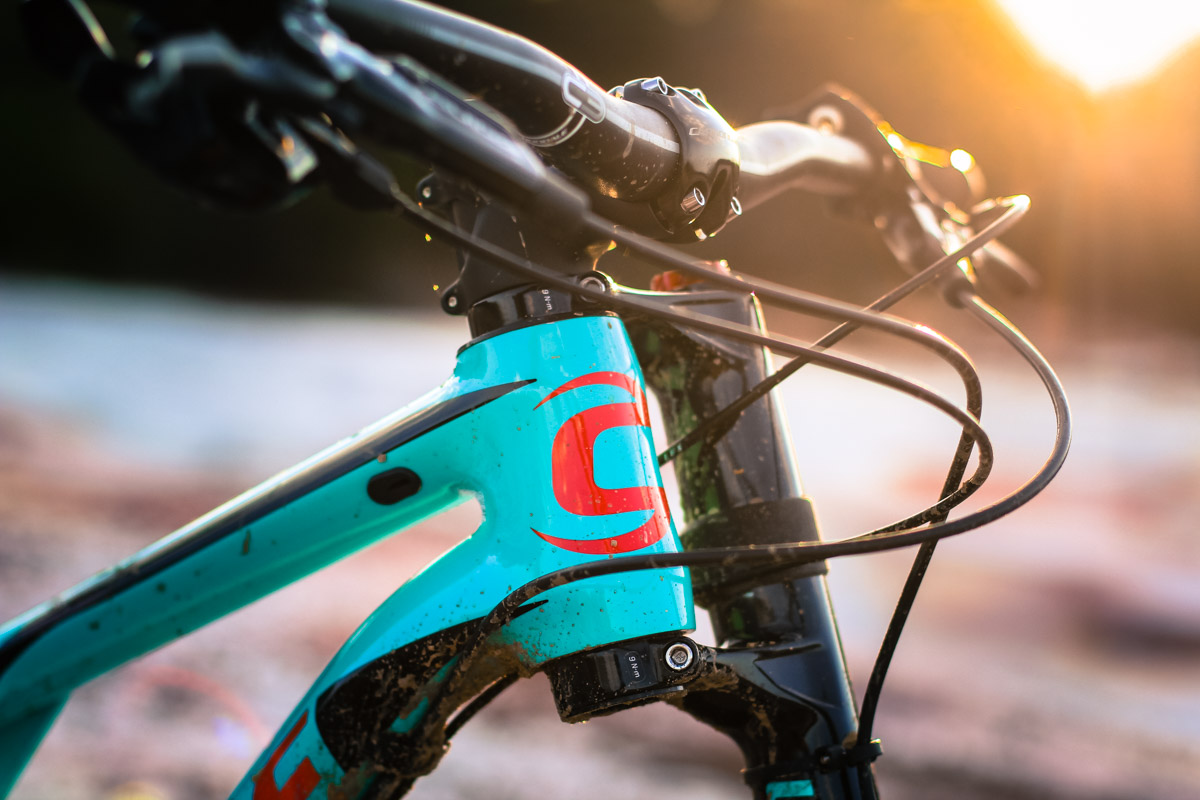 The Habit is part of the new guard of aggressive trail bikes: 120mm of travel with 27.5″ wheels, slack geometry, a short chain stay. We’ve ridden a bunch of these recently (the Trek Fuel EX, the Focus Spine and more), all bikes which 27.5′ wheels and great suspension have enabled to absolutely shred.

Being the ‘SE’ version, this bike takes the penchant for rough and tumble a little further than the rest of the Habit line, with a 130mm up front, which slackens the head angle to 67.5 degrees. Its target audience is the one-bike-rider, someone who doesn’t want a quiver in their garage, but needs a bike that’s light enough for the odd marathon race perhaps (and at just over 12kg, that’s certainly the case here) and is confident and burly enough for some over-enthusiastic play. 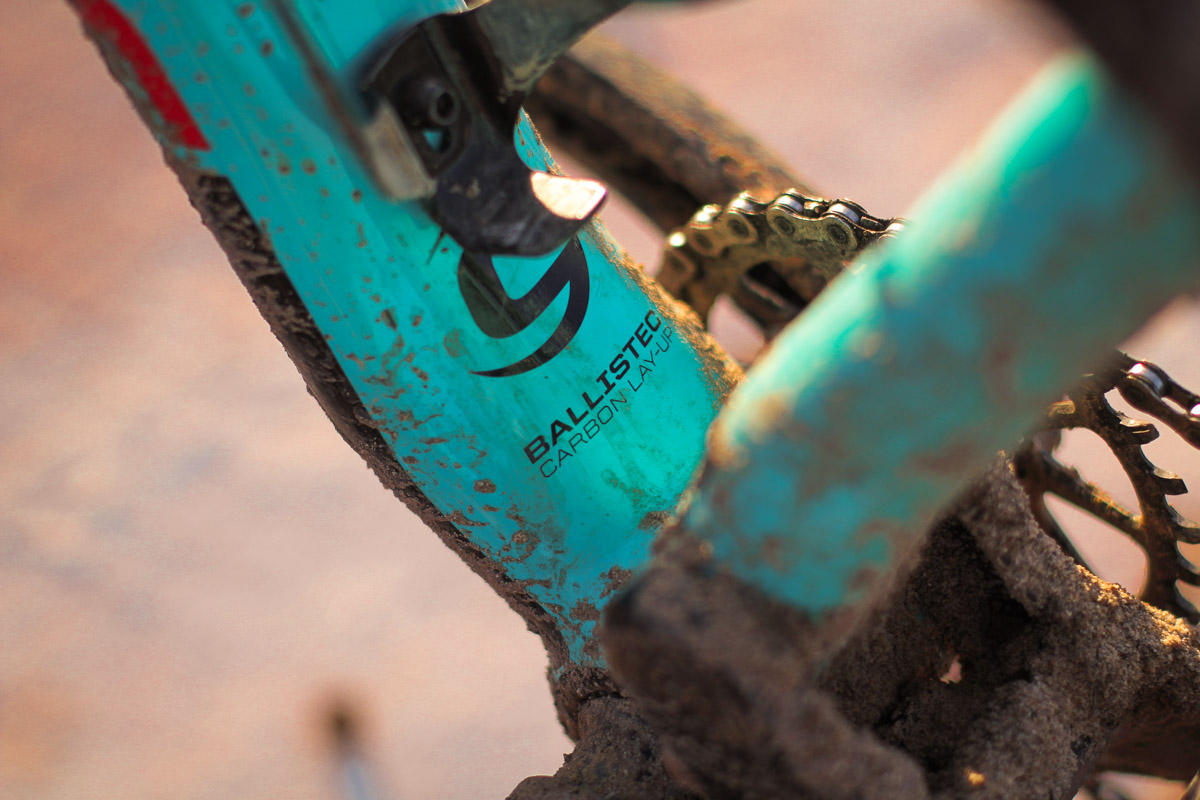 As we’ll elaborate on more later, it’s a bike that respects authority. Don’t try and baby it, give it your best drill sergeant impression and torment it instead. As such, we feel it will be best in the hands of a fairly competent rider. Those looking for more cushiness or a bike that will soak up mistakes will be happier on the Trigger or perhaps the Jekyll.

The presence of the Lefty is pretty overpowering, but ignoring this element, the Habit is a pretty traditional looking bike. It shares a lot in common with the lines and look of the Scalpel actually. The mainframe is built from Ballistec Carbon which is said be more resilient to abuse than Bob Hawke’s liver. The rear end is alloy, and you’ll probably notice there are no pivots out pack, the Habit uses a flex stay instead. Doing away with a pivot is lighter (tick), stiffer (tick) and there’s less complexity (tick!). On the downside, flex stay designs aren’t usually as smooth as a pivot-equipped rear end, and that’s the case here too. 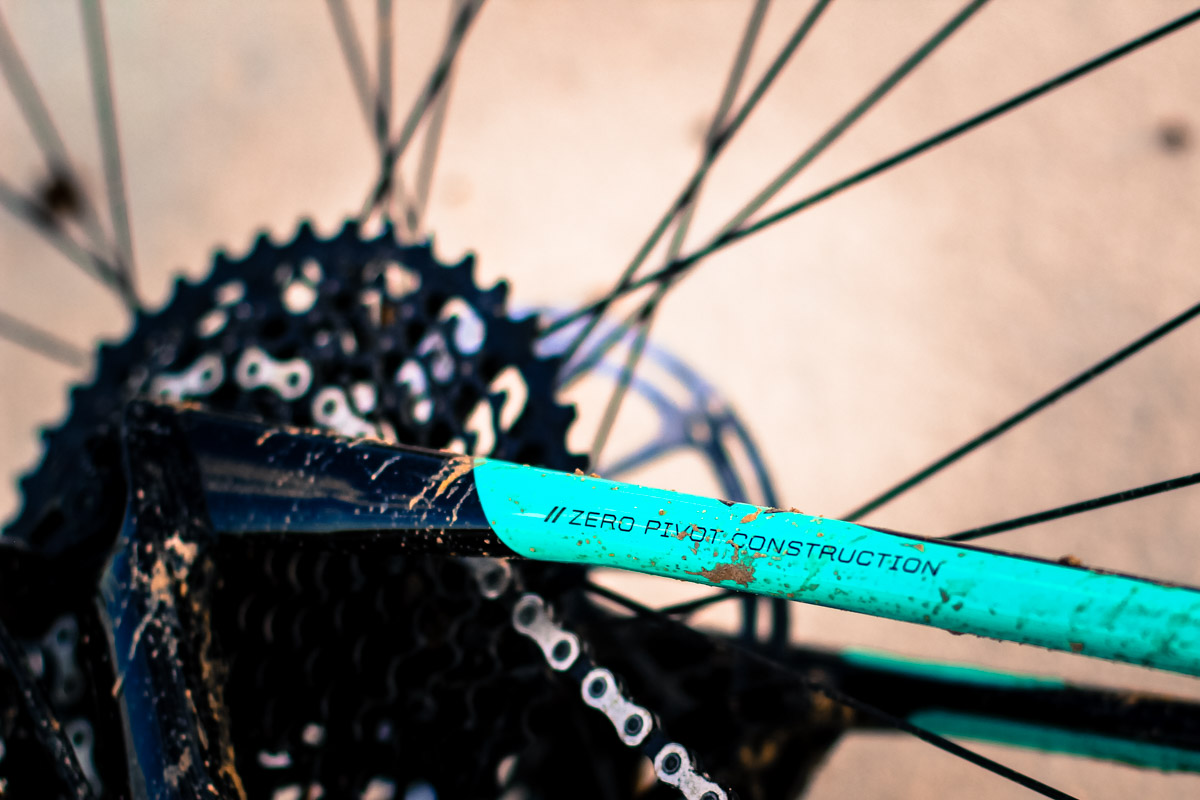 In between front and rear ends you’ll find a one-piece carbon swing link, and a RockShox Monarch shock. It’s nice and roomy, with muchos space for a proper sized water bottle too.

More stifferer: Cannondale pioneered the BB30 bottom bracket system found on the Habit back in the day, and it makes for a whoppingly stiff platform to bolt the SI cranks too. The head tube is similarly oversized, and the Lefty has a full 1.5-inch steerer. All the pivot hardware uses expanding collet style fittings, again ensuring a rock solid connection between front and rear ends.

Clean cables: Four cables is a good number. Two for brakes, one for your rear mech, one for your dropper post. The Habit doesn’t need or use any remote lockouts, with both fork and shock lockouts easily accessible. Using a combo of internal and external cabling, the Habit is mechanic friendly, but still visually clean.

The 130mm-travel Lefty PBR 2.0 is stiffer than a frozen kipper – you’ll not find another front end this precise outside of the realm of downhill forks. Internally, the fork now uses a hybrid bushing-bearing design, and the slider is square-shaped and runs on needle roller-bearings, which means it cannot twist like a regular fork. Point and shoot – it’s the main contributor to the Habit’s inclination to bite off more than you really ought to chew. 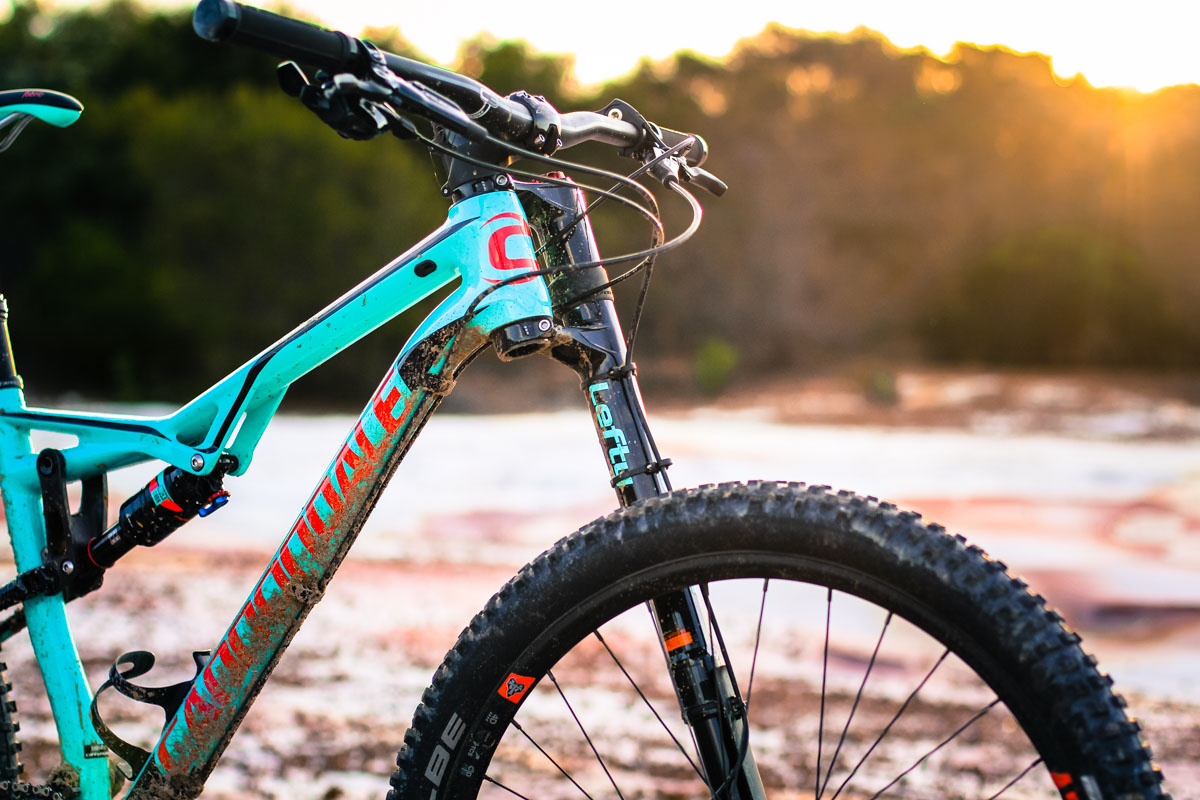 The Lefty packs all this aggro potential into a light chassis too, at 1950g. Externally, your adjustments are limited to air pressure, rebound and lockout, the latter two of which are located atop the fork leg for easy access. You just push the green centre button to lock it out, and the external button to unlock it. You don’t need to be precise or grapple with a lever, which is ideal for those last second unlocks at the top of a descent.

There has been a bunch of internal twiddling to improve the Lefty’s ride quality, and it’s definitely much better than previous versions. Better, but definitely not as good as some of its competition, such as the FOX 34 or RockShox Pike. We still found the Lefty’s rebound circuit overdamped, so we needed to run it as fast as possible to get an adequate rebound speed. Admittedly, heavier riders who will be running more air pressure will likely use more of the rebound range. The initial stroke sensitivity is great now, so it’s good over the smaller rubble. Repeated fast impacts are also much better than in the past, but compared to the amazing reponsiveness of the RockShox Charge or the FOX FIT4 damper, the Lefty 2.0 has a way to go. Cannondale have some good minds on the job, so we’re hopeful.

In our mind, it looks bad ass. (Or just bad, according to some people.) 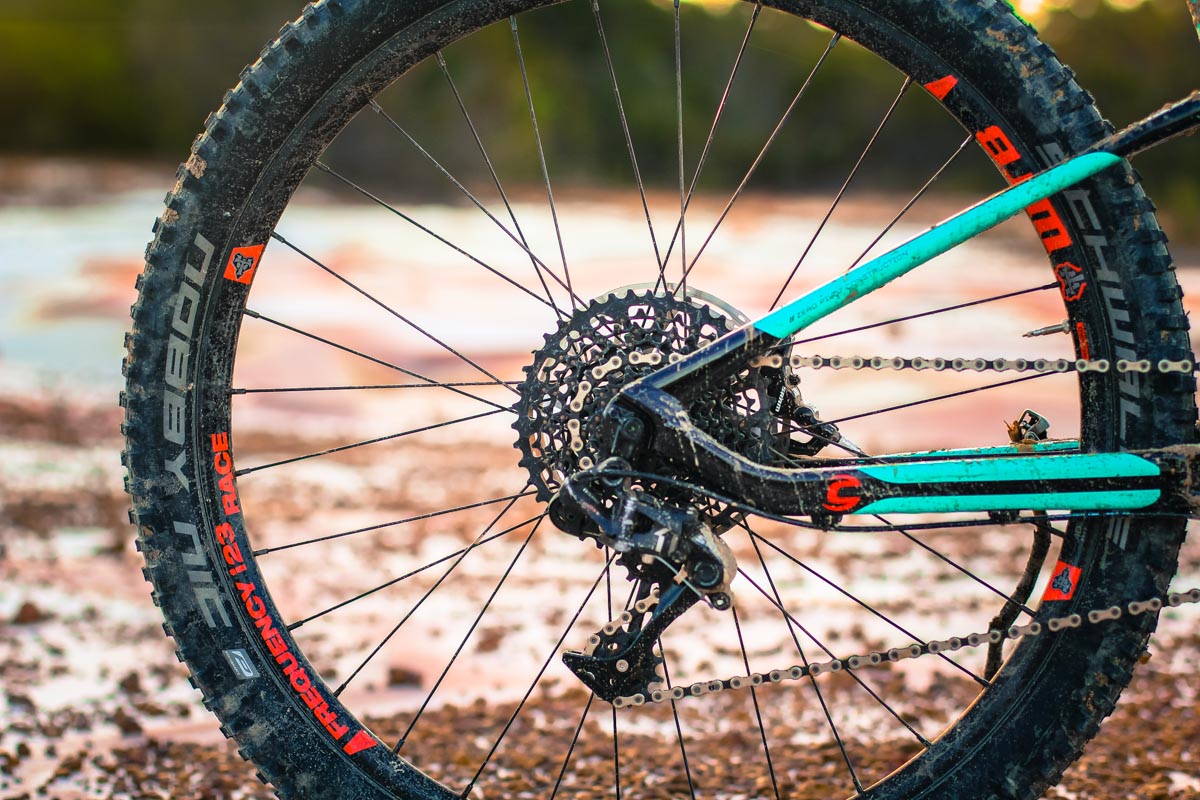 Flawless brakes and drivetrain: SRAM’s X1 1×11 setup is just so good. Not only is the gearing range whopping, but even after taking the derailleur on speed date with a large rock, the shifting remained perfect. The Guide RS brakes have an excellent lever feel and with 180mm rotors at both ends the power and control is on a level that even Putin would be impressed by. 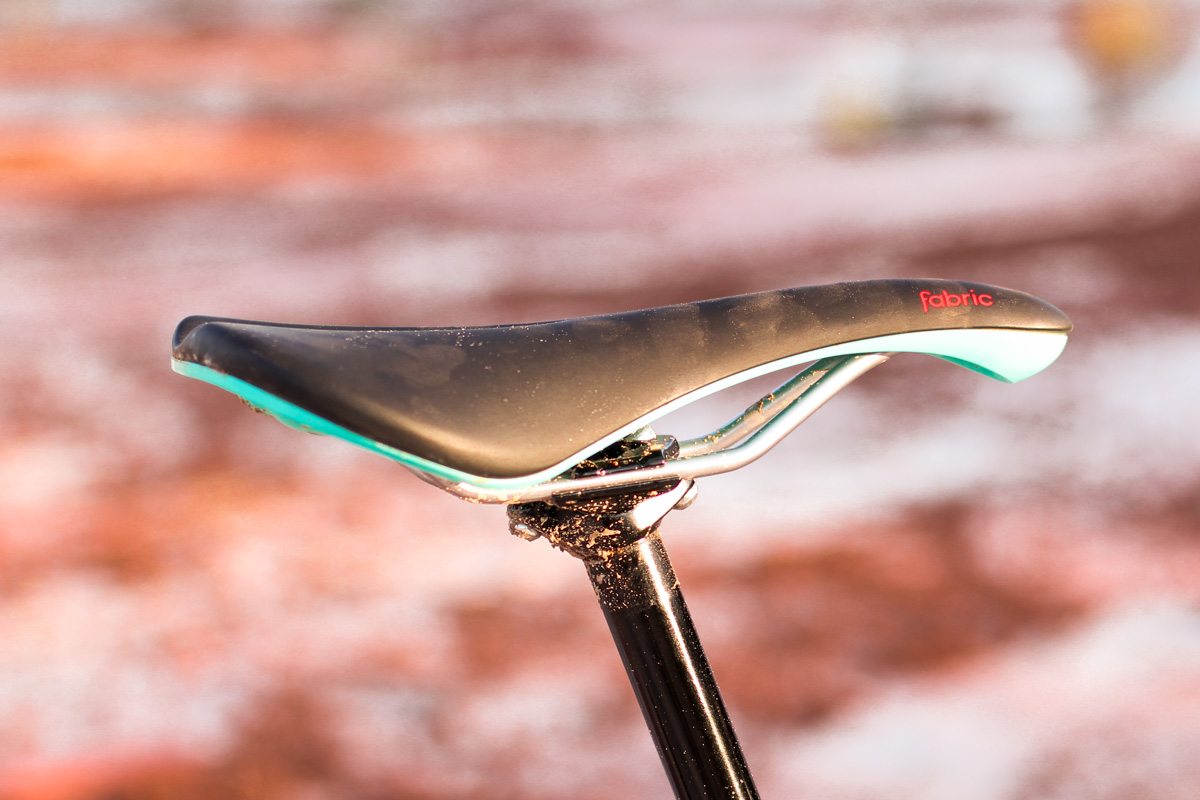 Fabric butt pleaser: Cannondale’s parent company Dorrell have acquired saddle brand Fabric recently, and their Scoop saddle is not only colour matched to Elton John standards, but it’s one of the comfiest saddles we’ve used.

Mediocre rubber: Schwalbe’s Nobby Nic is a good tyre, but the cheaper ‘Performance’ version found on the Habit isn’t on par with the rest of this bike. We really wish this bike had come with the gripper and more resilient SnakeSkin / Trailstar version of the Nic. The rims are tubeless ready, but past experience has proven the light sidewalls of these stock tyres aren’t really optimal for tubeless use.

Good dropper, but needs a different lever: The KS LEV dropper post is a favourite of ours, but the standard remote lever isn’t brilliant. Ours cracked, and it’s not the easiest to operate either, as the lever sits above the bar meaning you need to move your thumb a long way. Thankfully you can retrofit the KS Southpaw lever, which is a neat upgrade, putting the lever in a more reachable location. 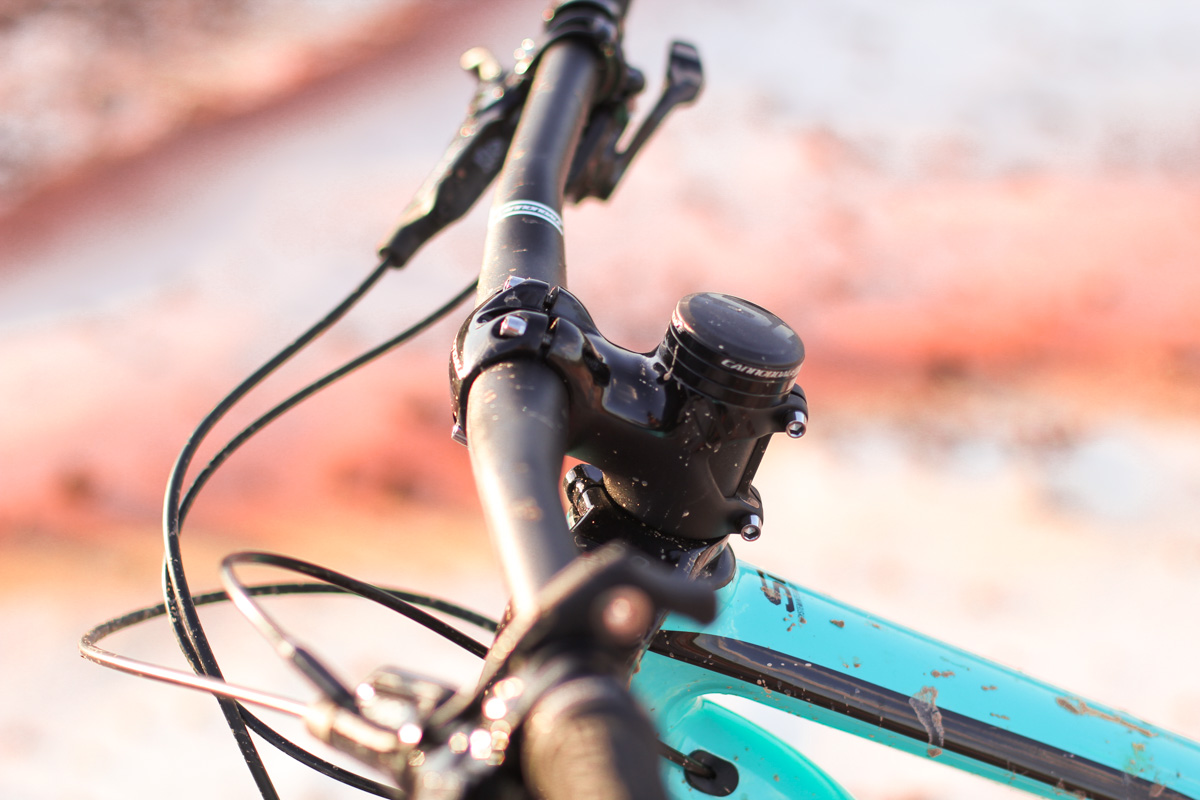 Great cockpit: Cannondale’s own stem and bar are stout, and the width/sweep of the bar felt perfect to us. The grips are unreal too, with a thin diameter that suits the bike

Grip it and rip it, baby: The Habit does its best work when you don’t hold back. On one test ride, we took this bike out after a long, tiring week, with a weary legs, and we couldn’t find our mojo. But when we rode the Habit feeling fresh, excited and pumped up, we had the time of our lives. You see, the shape and stiffness of the Habit is built to give you confidence. It’s a bike that derives its awesome abilities to hammer from its geometry, precision and drive, rather than grip or suspension performance. That means you must be prepared to work the trail if you want to get in the groove. 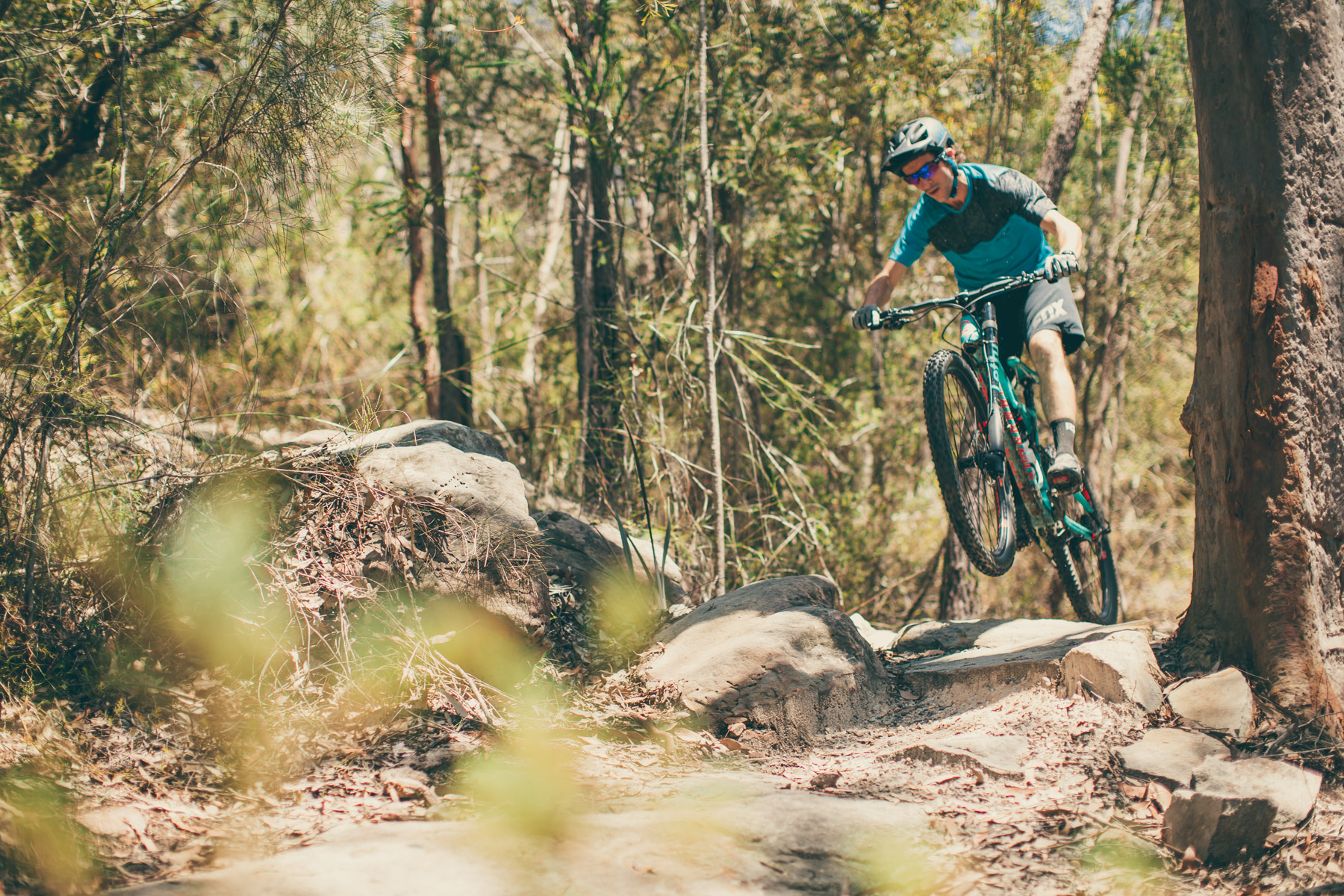 Climbing: Hanging with the cross-country bikes won’t be an issue on the Habit. The shock lockout lever and Lefty button are within easy reach if you need to really stiffen things up, but it’ll climb efficiently without them. The overall weight of the bike is pretty impressive – it harkens back to the days when Cannondale’s were always the lightest bikes going (though in that era, they were often broken too…) and this is a big contributor to the way this bike goes up. With a 30-tooth chain ring, climbing gears aren’t an issue either. 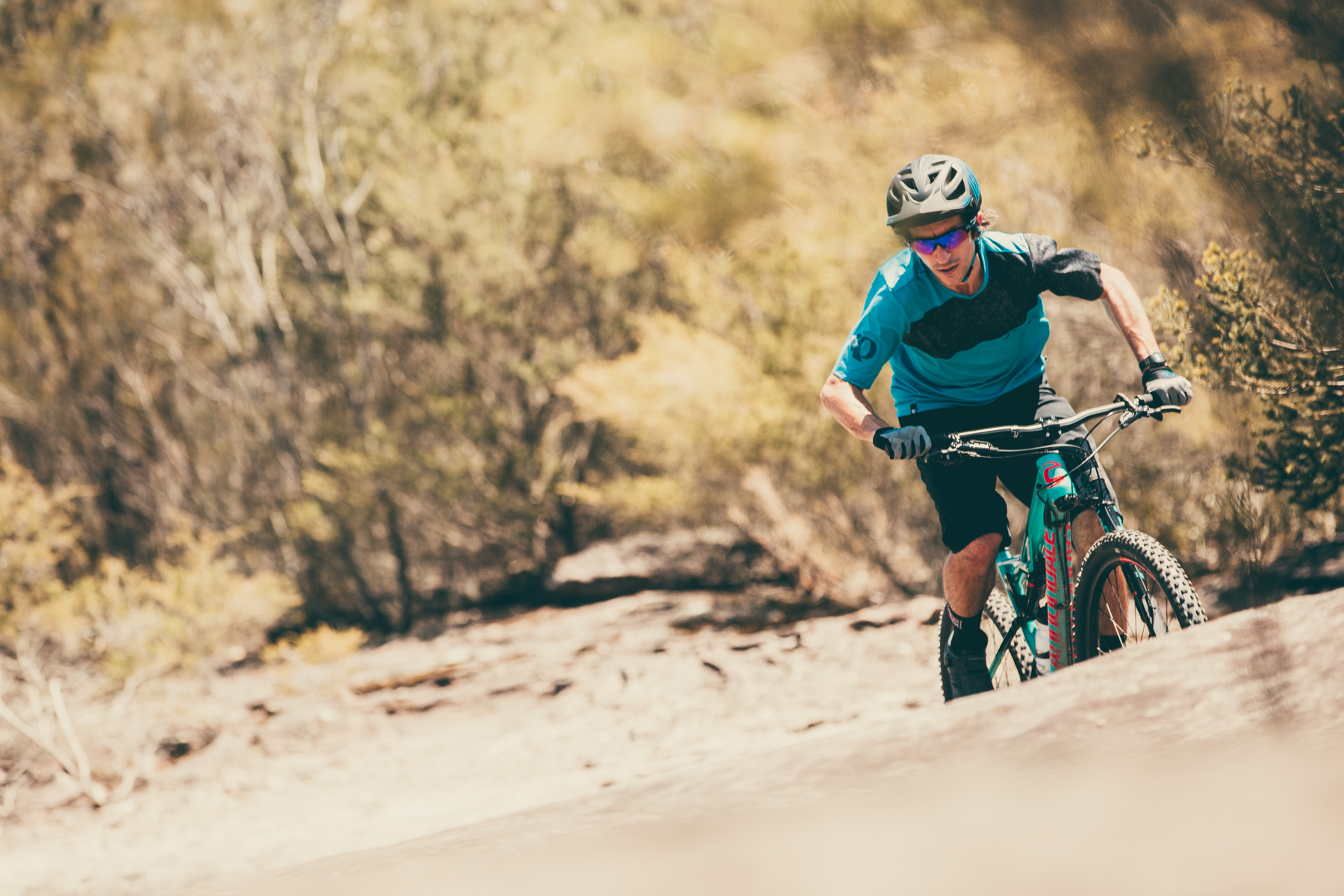 Cornering: It’s not a matter of whether the Habit will hold a line, it’s whether you can. This bike had us looking for off-camber inside lines everywhere. Even with loads of pressure in the tyres, we felt super confident chucking the Habit into dubious cornering situations, sometimes with less than upright outcomes. The frame and fork stiffness are the key here, and the Habit reinforced to us once again how often this area is compromised in other bikes. Would this bike be even better in the corners with more supple suspension and better, tubeless tyres? Yes, it probably would, but you’d also lose some of that engagement we enjoy so much. 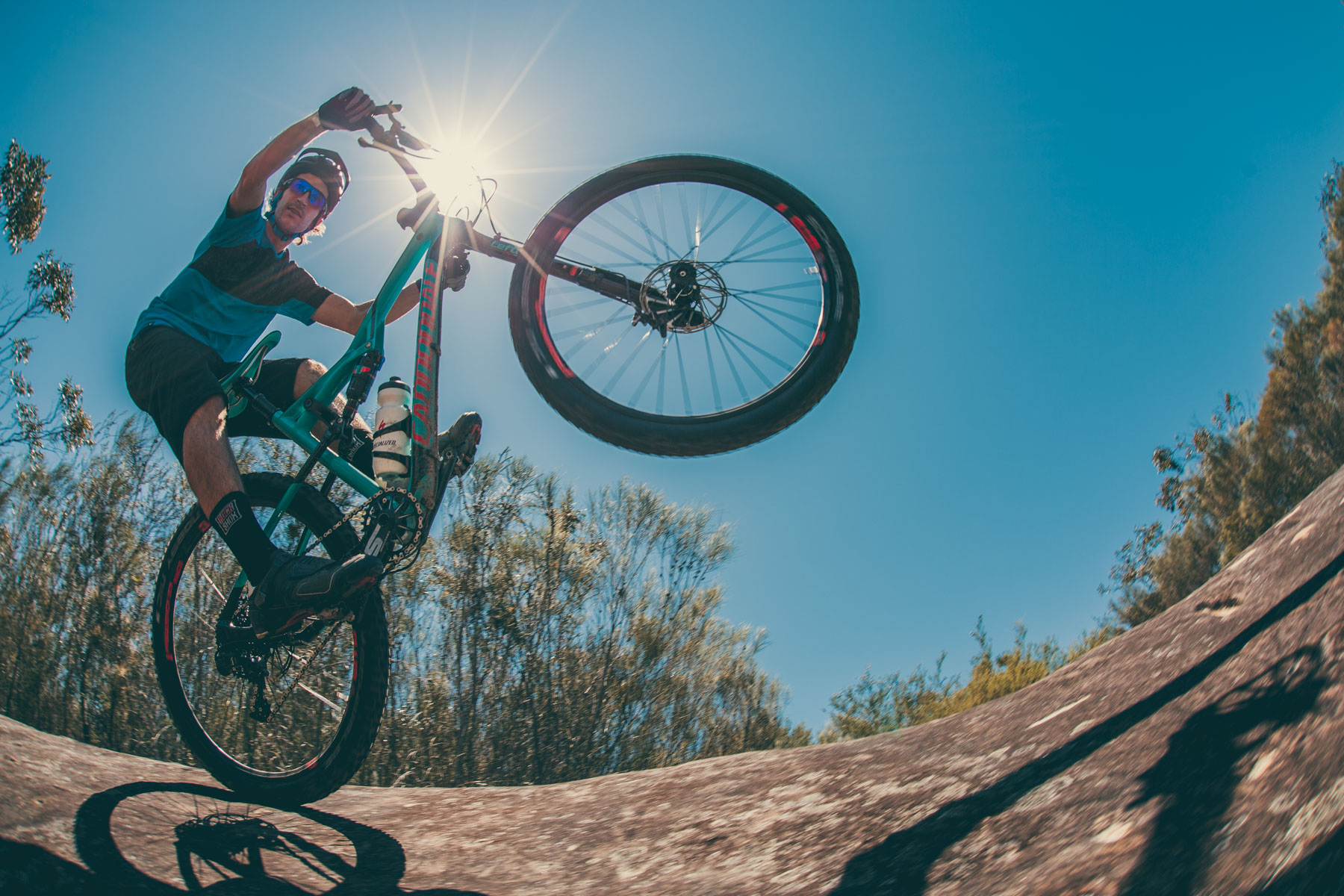 Descending: As they say, you’ve got to know when to hold ’em, know when to fold ’em. It’s the same on Habit – sometimes it needs finesse, sometimes it cries out for force. When the terrain is loose or sketchy, the less than supple ride of the Habit means you’re best off getting comfortable with the bike bouncing around and skating on the surface, keeping light. But on the opposite side, when things are rough, when there are big impacts or well-supported corners to hit, the Habit absolutely loves being driven straight into the fray with a firm hand. The relatively slack geometry is confident on steep rollers, and the Lefty doesn’t dive into its travel inopportunely so we never had any hint of getting chucked out the front door. 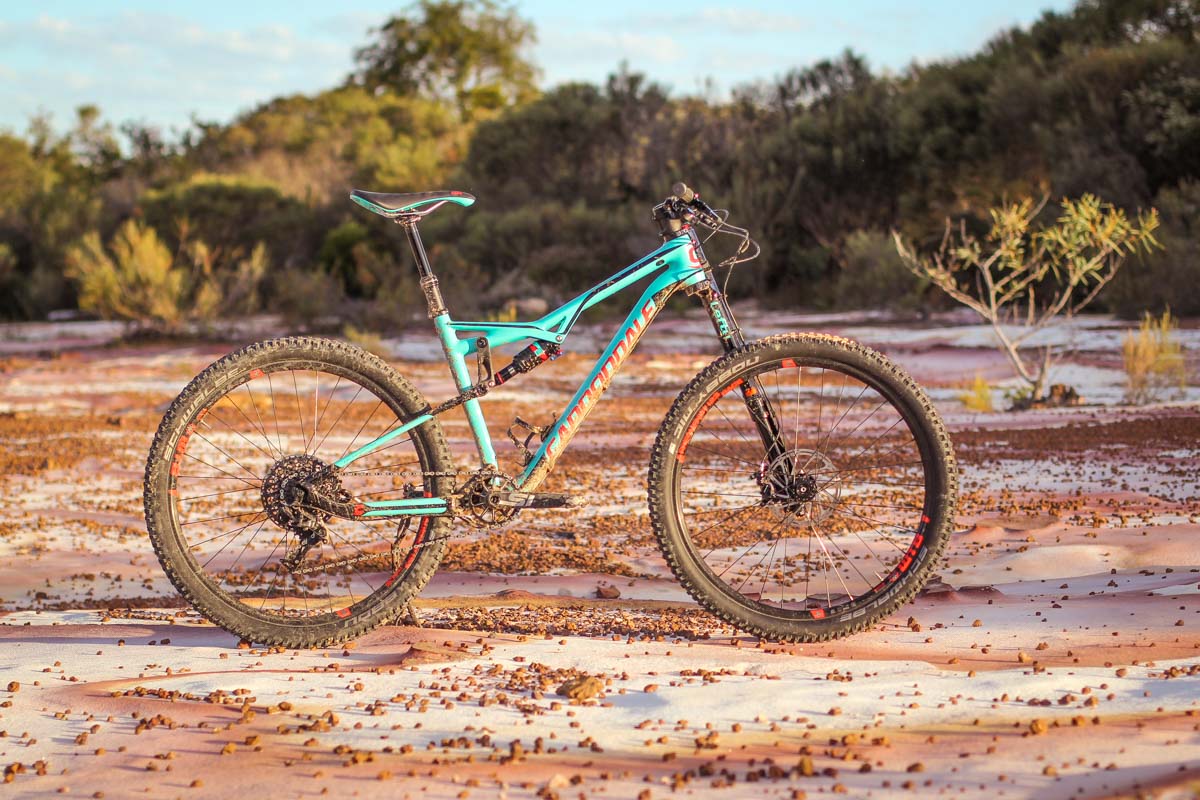 Not everyone is going to love the Habit SE. The presence of a Lefty alone is enough to put some people off. The colour is divisive. The suspension is far from perfect. But none of that matters to us, especially when we’re out on the trail grinning from ear to ear as we go back yet again to try and make that tricky inside gap line for the fifth time, or as the rear wheel sprays through a loose corner. This bike feels fast, it feels fun, it feels like Cannondales should. This is a good Habit to have.