Canyon were clearly on the same wavelength as us when they designed the Spectral CF 9.0 EX - this bike epitomises what aggressive trail riding is all about. 12kg of turn-ripping, gap-jumping, smile-cramping, carbon fibre fun. 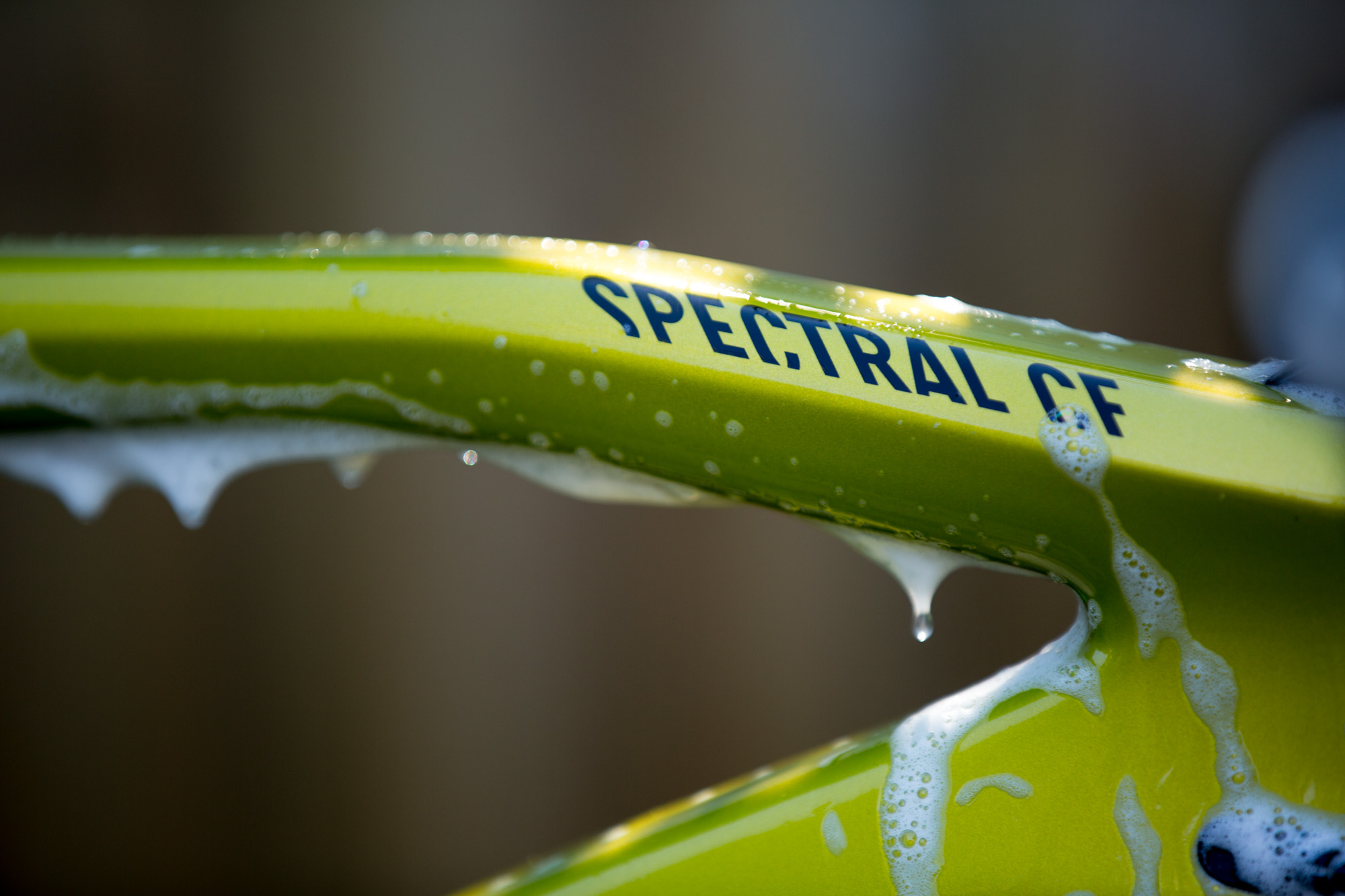 The EX in this bike’s name lets you know it’s a slightly different machine to the rest of the Spectral range, with 10mm more travel up front, at 150mm. The rear end is still 140mm, but the longer travel fork kicks the head angle back to a lazy 67-degrees, which is the kind of geometry that, like Barack Obama, says to you “YES WE CAN.” On descents which we’ve ridden dozens of times, we found ourselves spotting new gaps, playing with lines that just looked foolish or dangerous in the past. We don’t know if we were going any faster, but we did a lot of grinning.

Ensuring the ride doesn’t become all plough and no play, the chain stays are a tight 425mm, so it still rips around on the rear wheel like crazy. It’s all too happy to manual out of a corner and pre-jumping into every downside is second nature. You can pretty much disregard the landing ramp too, as the RockShox Pike will handle it all. We popped two Bottomless Tokens into the fork and fell in love with the Pike once again.

The Cane Creek DB InLine shock tends to divide riders. There are those who love its tunability and the way it devours all you throw at it like footy team at a Sizzler, but on the other hand it’s a complicated shock to adjust and it doesn’t have the best reputation for reliability. The Spectral comes setup with Cane Creek’s recommended tune out of the box, and we’d advise you not to make any changes at least initially. Ride it, get a feel for the shock, and then if you want to tweak, do so in small amounts keeping track of the changes you make. We added half a turn of high-speed compression above the baseline setting, just to give it a bit more support on the big hits to match the fork’s performance.

Climbing on the Spectral is made easier by the bike’s low weight, but you’ll still want to use the shock Climb Switch regularly. It creates a stable pedalling platform but the shock definitely feels a bit ‘dead’ with the switch engaged, especially when compared to a FOX shock which is firmer when locked out but still has a bit of liveliness about it.

Hooking into a grippy turn on the Spectral is the kind of experience that makes you wee a bit, with joy. The cockpit and fork just encourage you to lean on the front wheel, and the tyres grip like they’re made from warmed-up chewing gum. Don’t get too accustomed to the grip of these treads though – they don’t feel like they’ll last long, the compound wears down fast. The Mavic CrossMax rims mightn’t be the widest going, but we didn’t have any issues with tyre support and the wheels look and sound awesome.

If your shifting and braking don’t have a conscious place in your ride, that’s a good thing. Thanks to the addition of an E13 chain guide, we never even considered the chain on the Spectral, and the 1×11 SRAM X01 drivetrain never left us wanting at either end of the gear spectrum. With 180mm rotors at both ends, a featherlight touch is all that’s needed and you’ll feel those soft tyres clawing into dirt to slow you down.

When a bike gets the little things right, it all has a way of compounding into a bigger, better experience

When a bike gets the little things right, it all has a way of compounding into a bigger, better experience and the Spectral sure nails all the finer details. The cable routing is great and silent, there’s comprehensive protection from chain slap and down tube impacts, and you can fit a water bottle with ease. We especially like the Impact Protection headset that stops your bars spinning in a crash as well. And that colour! We think it’s brilliant – it certainly is bold and unique, and depending on the light you view it in, it can appear anything from fluorescent green to metallic gold. If it’s all too much for you, you can get the bike in black as well, but if we owned this bike we’d want people to notice it. 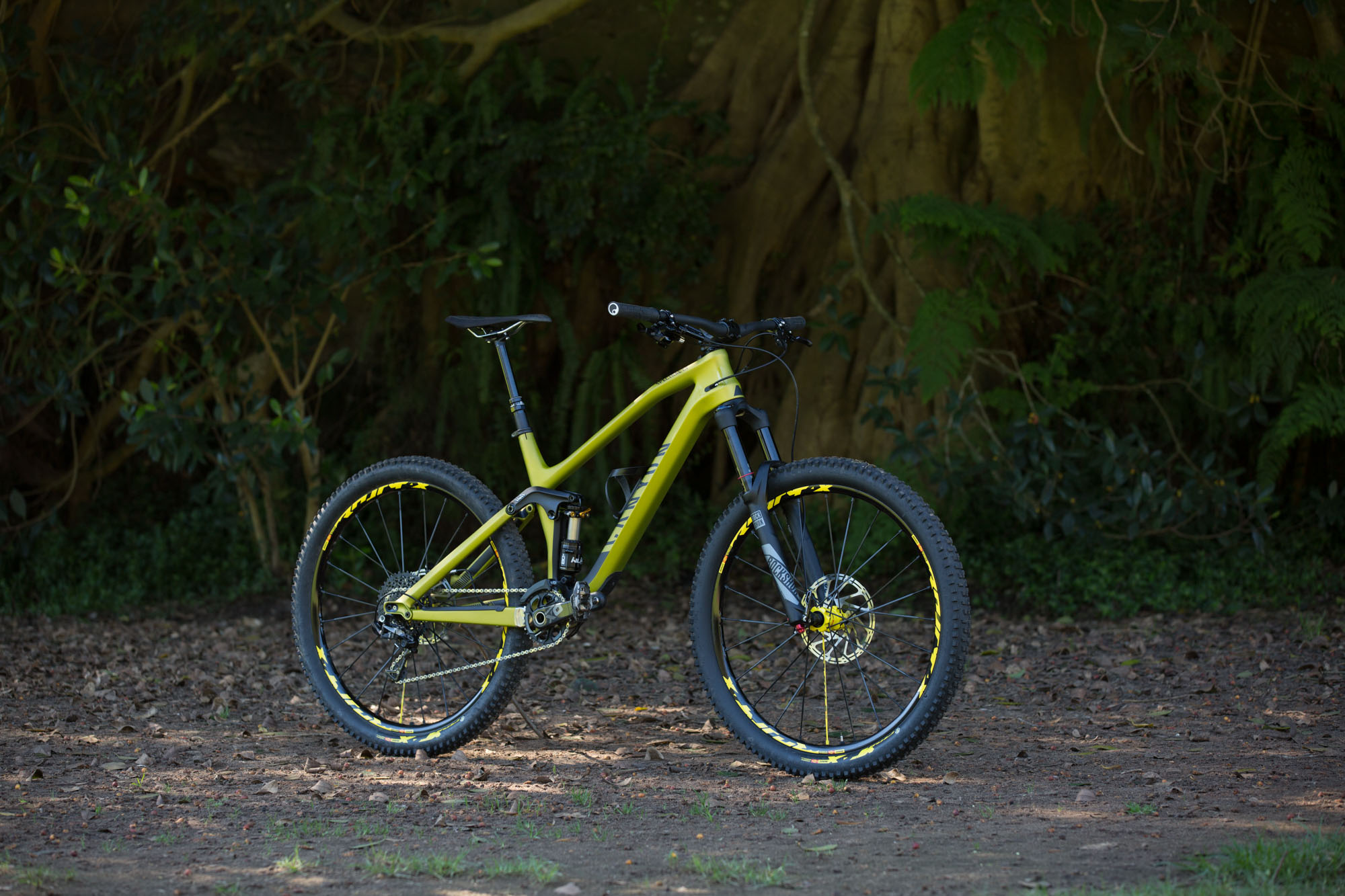 If a bike can make you look at trails you’ve ridden countless times in a new light, then it’s doing something right, and the Spectral certainly achieves this. It’s fun as hell, has a kind of polished construction that you’d hope for in a German brand, and it comes in it a price that (while admittedly still a lot of money) is very competitive as well.