We've had a long, happy relationship with the Canyon Strive - in 2016 we adopted one these bikes as long-term tester and loved it so much we hung onto it for over two years! Canyon have been busy little beavers, and the Strive is the latest bike in their range to receive a wholesale re-invention, alongside the Spectral and Neuron. We've just returned from Malaga, Spain where we had a few days rumbling down the rocks on this greatly improved, 29er Strive.

While the profile of the new 2019 Canyon Strive is familiar, there have been two fundamental changes; firstly, the bike is now 29er only (and carbon only too), and secondly the ShapeShifter system is greatly improved.

Still got the ShapeShifter?

The ShapeShifter system was always a key drawcard for the Strive, allowing riders to change travel and geometry on the fly for climbing/descending. But it was not without its operational issues – reliability on the early releases was dubious, and it required riders to use a lot of body language and precise timing to toggle between modes.

The new version is much, much better. Canyon called in FOX to help with the project in a wise collaboration.  There’s a new ‘Click Clack’ lever system that now sits below the bar, in a neat cluster with the dropper lever and the whole thing is simpler and more durable.

Our test bike, pictured here, is running a RockShox Reverb, but Canyon have developed their own dropper lever which will come fitted to all models of Strive running cable-actuated posts.

Check out our review content of this bike’s predecessor, which we had on long-term test:

Can it still use a normal shock?

Yep. Unlike some other on-the-fly travel/geometry adjustable systems (like Scott’s TwinLoc), the Strive can take a regular shock so you’ve got the option to customise your setup with a different shock or source an easy spare if need be.

How does it work?

The ShapeShifter makes some pretty big changes to the bike; toggling from DH mode to XC changes the rear travel from 150mm to 135mm, steepens the geometry by 1.5 degrees and completely changes the suspension kinematics to provide 20% more anti-squat. The whole system only adds around 200g too.

But the key motivation for Canyon was making the system easier to use. On the previous model, you had to transfer your body weight whilst holding down the ShapeShifter lever. With the new system, you just push the button and forget about it.

The current wave of long-travel 29ers are more than just a trend, and Canyon insist that they did extensive experimentation and testing with 27.5”, 29” and even a hybrid of both before making the call to go the big wheels. 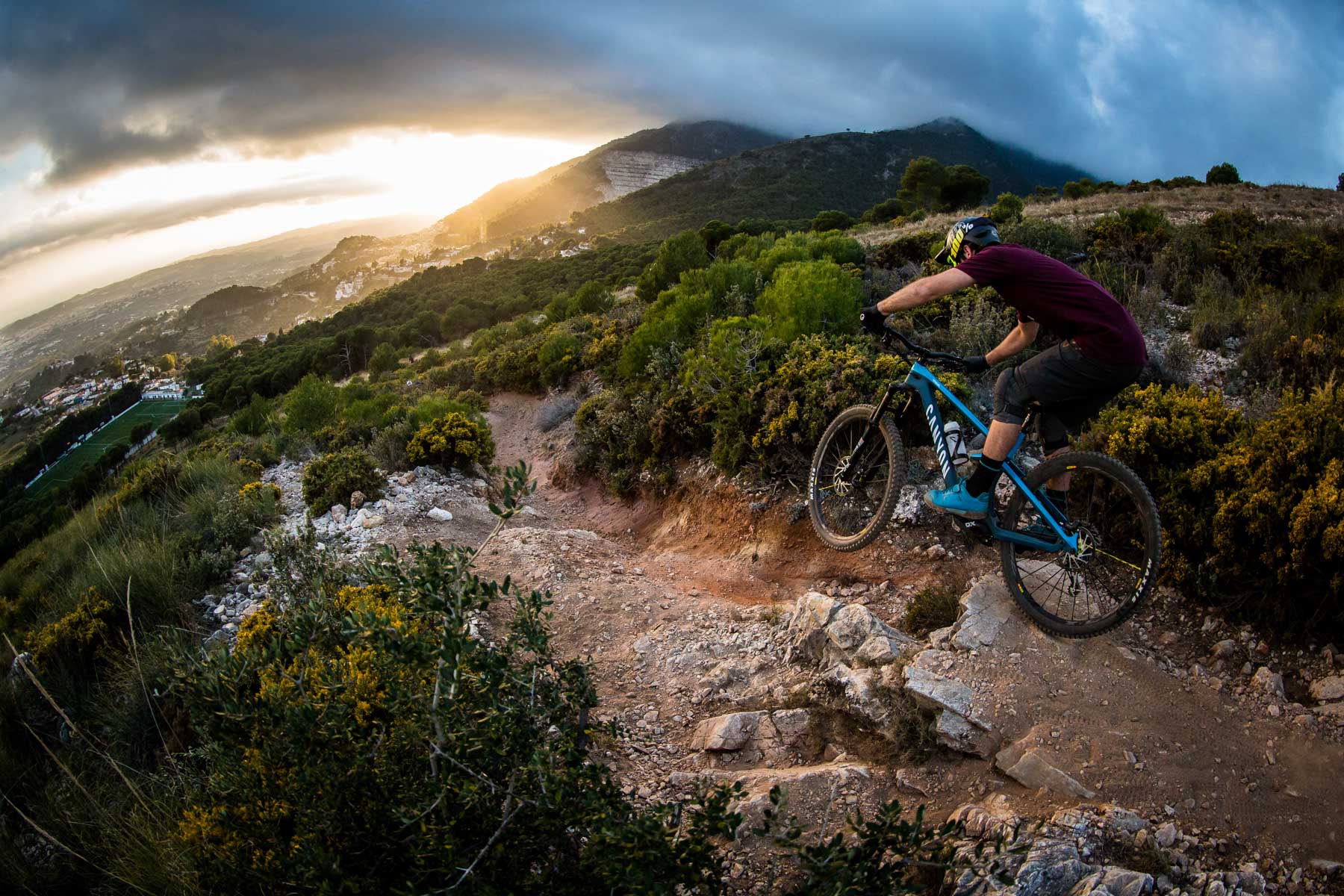 The 29er became a natural choice for the Strive as it’s bred to be a race bike with no compromise, and that meant going for the faster rolling wheels. Love it, or lump it. While other brands seem to have embraced the idea of giving riders a choice in wheel sizes for each model, Canyon insists that choosing the faster-rolling wagon wheels exclusively is better for the consumer. If you want the small wheels, you can always look at the Spectral.

At this stage, there are no plans for an aluminium version. Given that pricing starts from less than $4500, we don’t think this is an issue. 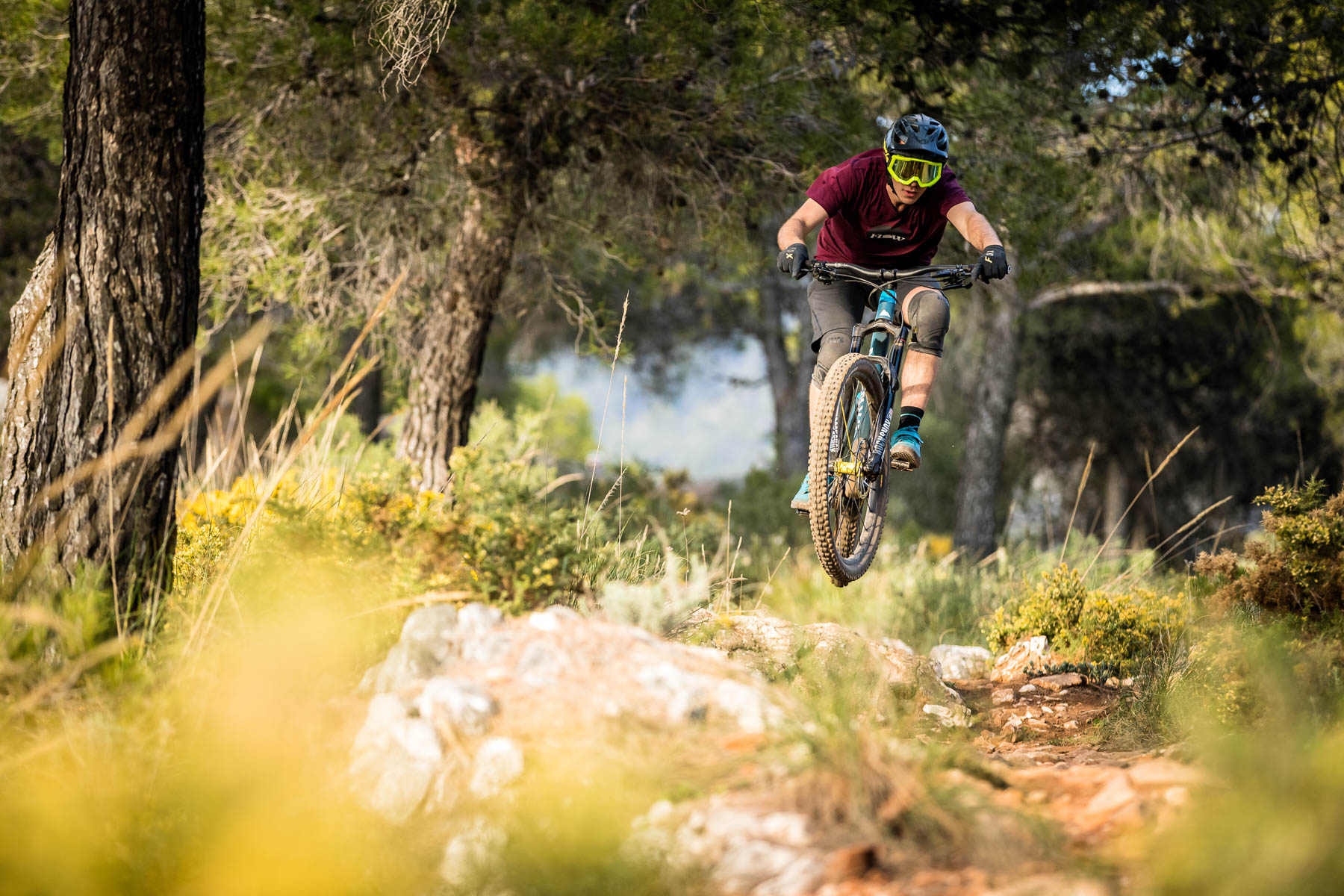 Canyon had us out to give the new Strive CF 9.0 Team a thrashing in the rocky Malaga hills. As the second-to-top spec offering, the 9.0 Team ticks every high-performance box without moving into stupid pricing territory. A high-end SRAM build and Mavic wheels saw this bike weigh in at 14.05kg, which is very light. On hand to ensure our bikes were setup perfectly were Canyon’s engineers and mountain bike legend Fabien Barel.

With the move to larger wheels, Canyon were committed to a geometry of long front centre and short rear end, to ensure the bike didn’t lose its playfulness. The rear centre is 435mm long, which is impressively compact given there’s ample room around the 2.5″ rubber.

Having spent a lot of time on the previous Strive, the most immediate changes we noticed were a big increase in straight line speed, more grip and pace in flat corners and far superior momentum over technical sections. Thanks to a relatively short stack height up front, the position felt very natural to us, not at all tall like some big-travel 29ers, and soon we’d forgotten entirely that we were riding a 29er.

There have been big changes to the suspension feel too. Our bike was equipped with a RockShox Super Deluxe, a shock we’ve ridden a lot, but never have we had a bike extract so much performance from it. The more progressive mid stroke allowed the shock to be more effective at absorbing faster impacts, while still maintaining a solid platform to push and pump through holes and corners. It loves big hits too, and even when we ran out of talent, slamming into the backside of a lander and slamming to a stop, we didn’t bottom out the shock (even with 30% sag).

When we finally hit the bottom of the shuttle road every time, we found the ShapeShifter felt pretty natural to use and made a welcome difference. Switch it to XC mode and you’ll feel the effects immediately – pedal bob was reduced, and you’re raised into a more comfortable climbing position. The system is so effective, that we didn’t even bother using the shock’s compression adjuster – the increase in anti-squat in XC mode is more than enough to keep the bike stable under climbing without reaching for the lockout.

In our eyes, the functionality of the ShapeShifter system is a winner. However, there are going to be some detractors – it does add an extra lever and cable to your cockpit, and an extra layer of setup. If you are willing to accept the added complexity, you are sure to be rewarded with noticeable gains on those pinch climbs deep in a race stage, where there’s nothing worse than bobbing up and down on an open rear shock and watching seconds slip away.

If you’re the kind of rider who looks for the best ways to get an edge in competition, or can’t get enough of innovative creations that push the limits of mountain biking, then take a closer look at the Strive. 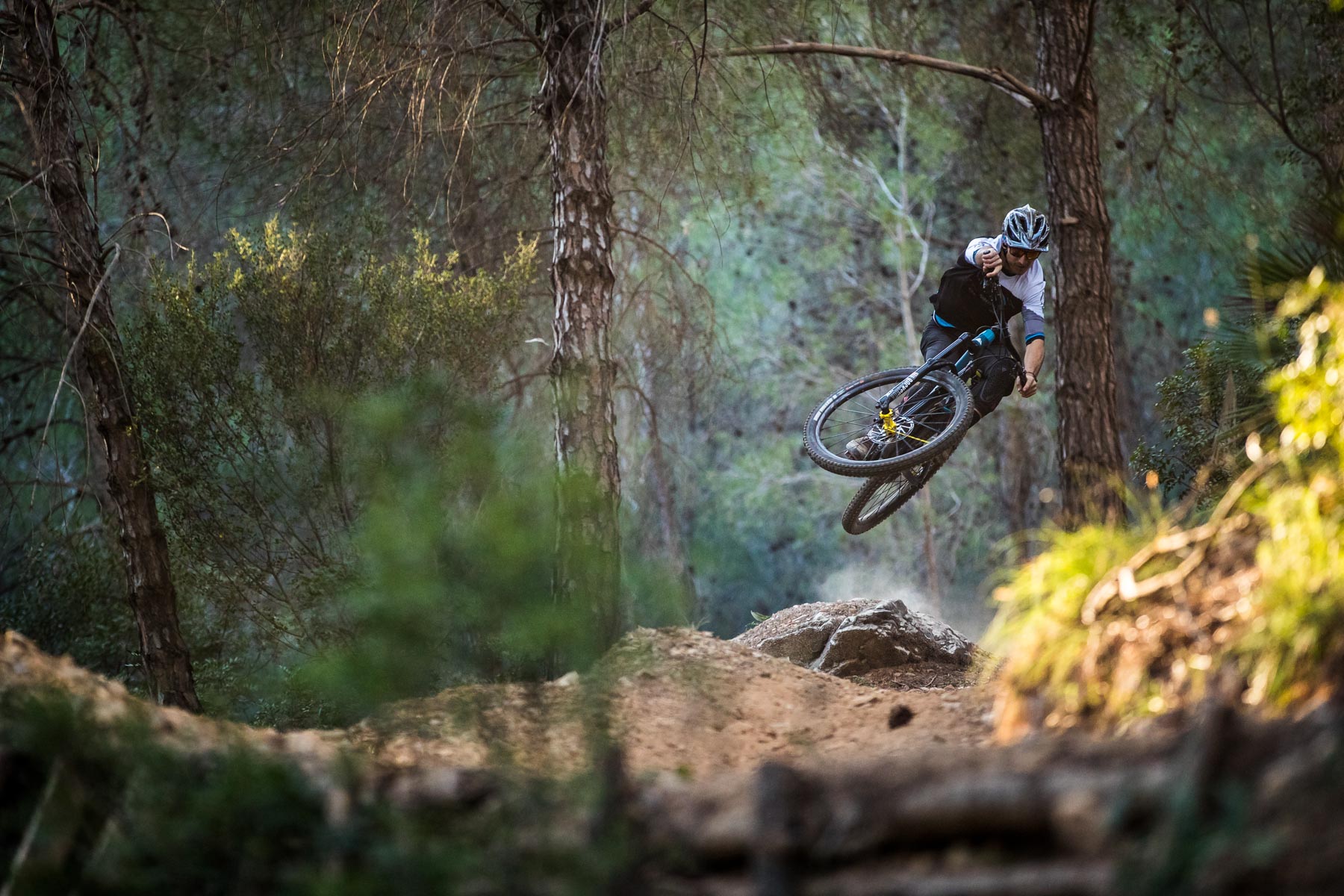