In 2011 Danny Hart won the UCI World Championships on the Giant Glory. However, at that time he was on a bike that was a little different from what us consumers could buy off the shop floor. “World Cup” angles, changed geometry and a slimmer weight was what Danny needed to get on the podium.

Lucky for us soon after Danny’s rainbow striped win Giant released the same bike to the world and the 2014 Glory’s have continued with that same winning formula. A slacker head angle, longer wheel base, lower bottom bracket, and lighter bike all add up to a package that’s world cup race ready. 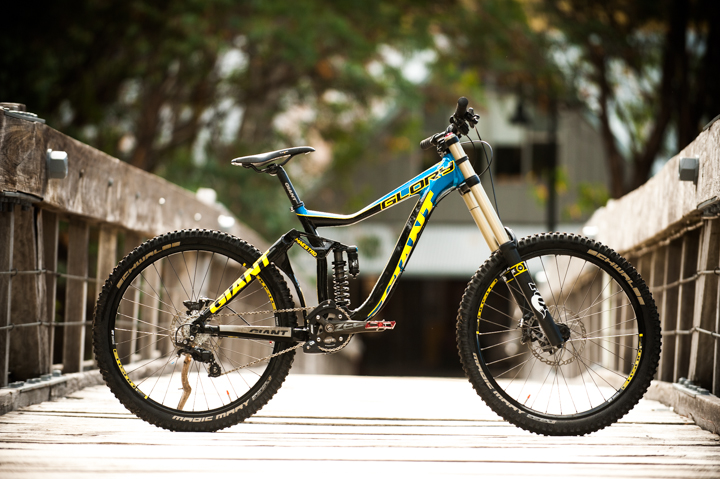 We took the Glory 1 to Thredbo for some testing to see if we could channel Danny Hart a little, and ride like a World Champion. 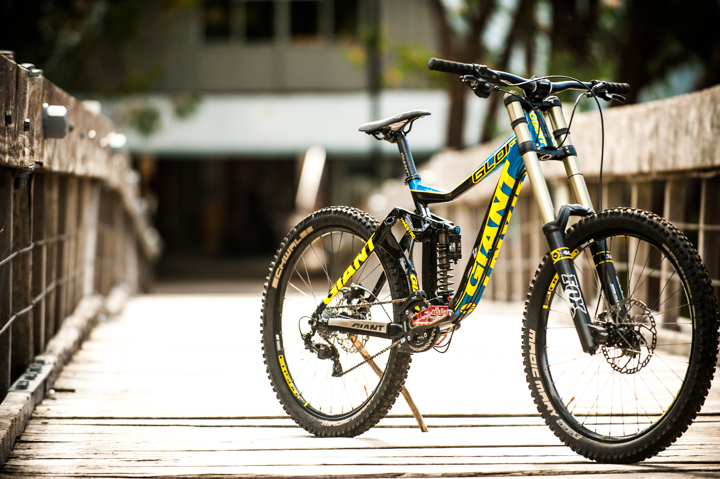 The Glory 1 is based on the same Maestro suspension platform you’ll find on the entire Giant range however this beast gets 203mm/8″ of travel. This suspension design has been proven on their entire range and its liner spring curve means a nice even stroke. Maestro utilizes four pivot points and two linkages (upper and lower) that all work to create a single floating pivot point.

The Glory 1 frame is made from Giant’s ALUXX SL aluminium and is essentially the same frame as the top of the line model. Giant have an extensive line of carbon bikes now however at this stage they have chosen not to include it in their downhill offerings. On the graphics and look side, there’s no missing that the bike is either a Giant or Glory as the styling and colours really mean you wear your brand with some pride.

As mentioned in the opening paragraph Giant have stuck with the same new angles as released after Danny Hart’s World Championship win. The head angle is 63.5°, seat angle 61.8°, bottom bracket height at around 330mm, chain stay length 444.5mm and overall wheelbase 1211.5mm (on the size Medium). If you look at the stats of the older Glory you will see the wheelbase has really been extended from the bottom bracket to the front wheel – the from-centre measurement. This lets the bike stay playful at the rear but adds stability to the front to the bike.

There is no adjustability with the frame however a shortish head tubes means you have some flexibility in the set-up and can change the head angle a little.

The cable routing is neat but we’re a little puzzled with running the cables on the underside of the downtube. As downhilling tends to be a little more extreme we’d be a little concerned about damage to cables, especially brake cables.

Any Giant is always excellent value for money and their OEM sometimes leaves you wondering off which truck did they steal the components. At $4299 off the rack, the Glory 1 is kitted out with a full Shimano Zee group set, FOX suspension and DT Swiss wheels.

The Zee is the more affordable cousin to the Shimano Saint and the biggest noticeable difference is the more “plastically” looking rear mech. Performance wise the Zee group worked really well. It shifted well and chain bounce and security was great with a clutch derailleur matched with a MRP G3 chain device.

The Zee brakes share the same twin-piston design as their more expensive cousin – Saint – and over all the Zee’s still did a good job. Thredbo has always known to be brutal on brakes and it’s really only going to be the top-of-the-line models that can handle it best. That being said, the Zee’s still had power at the end of the run, it’s just that you needed to pull them just that little harder and at no time did we ever feel like we didn’t have enough to stop us. Our experience with the Shimano Saint maybe has made us a little lazy in the braking department.

You’re also treated to FOX front and rear, with an Performance series 40R fork and RC2 shock. These items don’t offer the same adjustability as the more expensive Factory series fork and or RC4 shock, but that’s a tradeoff we’re certain many will be willing to make. We found it took a little while to get the suspension dialled and we felt the rear of the bike a little under-sprung for our 72Kg tester.  Once set-up though the bike handled really well and most noticeably in corners, jumping through rock gardens and hitting the big jumps. You have to appreciate that the price point of this bike means a little less adjustability and you really need a few extra fork and shock springs to swap around to get that perfect performance.

The wheels are a mix of Giant hubs, DT hubs, and DT rims. We noted no problems with rims and they stayed straight during our testing period. The Schwable Magic Mary tyres were great when you were able to get them to dig into the soil, really great actually, and especially after a little bit of rain and ensuing hero soil. However we think they’re probably a little less suited to really hard-packed terrain as the knobs won’t be able to dig in and you can feel them move under cornerning.

The cockpit is comfortably equipped with a 750mm Giant Contact bar, Giant grips and Truvativ stem. We would have like the bars to be a tad wider and sorry Giant, you have to get a better grip designer, we ditched ours straight away.

The Giant Glory comes with proven World Cup pedigree and the ride felt like a winning Danny Hart run. Fast, a bit loose, and ready to jump all over the place. 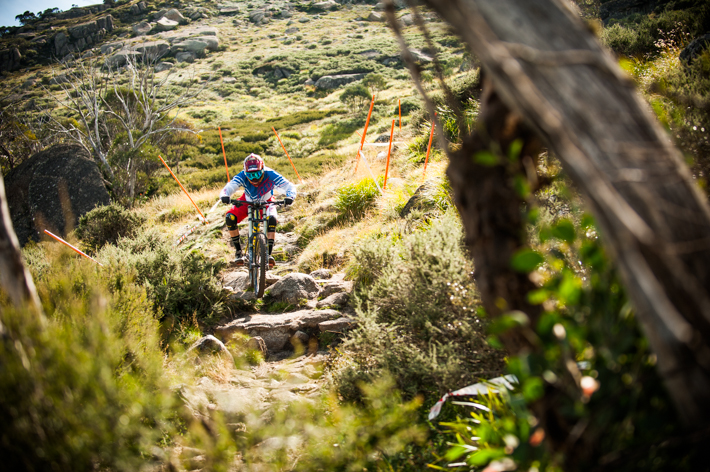 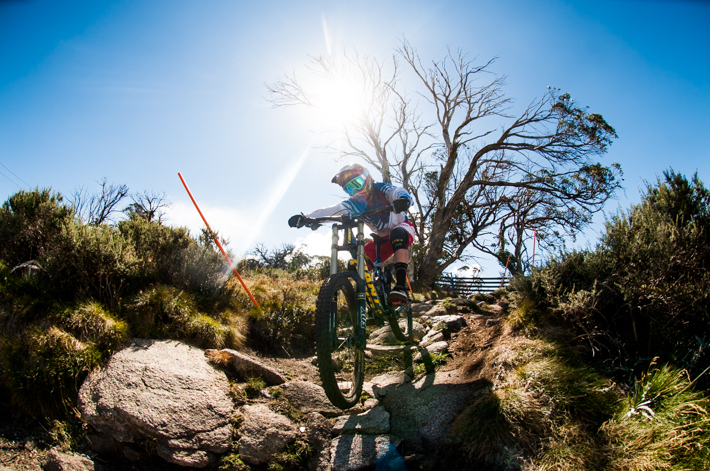 The strength of the Giant is its ability to move around the trail quickly as you pop in and out of corners and across rock gardens with ease.  It’s more a bike that prefers to be gently lifted and placed on the trail rather than ploughed through the rough stuff. Think of it as doubling through a rough section more than pointing and hoping. The Glory also felt better when ridden more centred on the bike with your body weight pretty much over the bottom bracket.

If you’re lacking a little confidence in your jumping then the Glory may be the bike for you.  We found it super easy to jump and at times we found ourselves jumping a little too far.  The Glory even made the big double at Thredbo feel like a breeze.

When bottoming out the Glory does feel a little harsh right at the end of its travel and you will hear it screaming back at you with a bit of a “thud”. There was never an issue with performance it was a little harder than the rest of the stroke. We think our Glory was under-sprung for us as we pushed the bike to that point a bit too often. A few turns to pre-load the spring would help this but that’s reality never a recommended way to adjust the suspension. A new spring would be the answer. 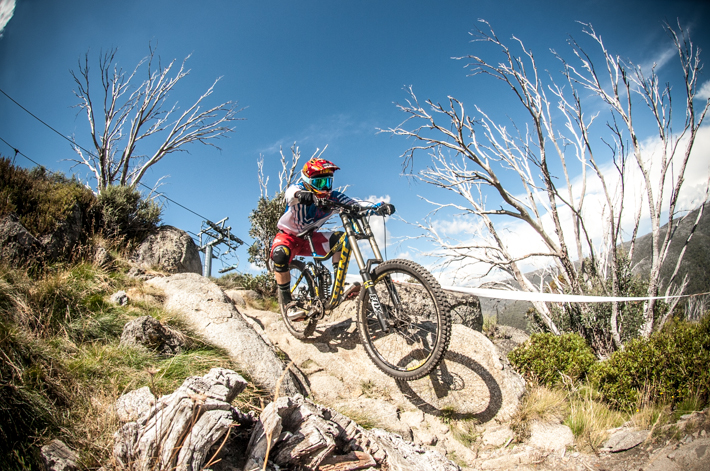 The only real negative was the rattling spring in the FOX fork. It’s a common fault with the  lower spec. FOX 40 as the plastic wrap on the spring works its way down the length of the spring, thus enabling the spring to rattle inside the fork under low speed compression. It’s an easy fix though and we recommend you ditch the standard wrap and add a full length one of your own. 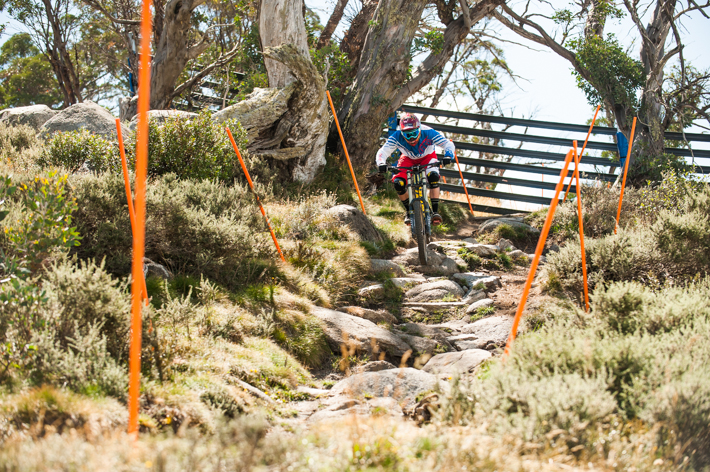 The Giant Glory 1 is a great downhill race machine – straight out of the box.  You’d be hard pressed to find a better value bike that has been race proven at the world level. It’s best ridden with a lighter more playful style and if you channel Danny Hart before you begin your run it will actually let you pull an amazing whip. Just fix the forks and you have a bike that’s quietly ready for anything. 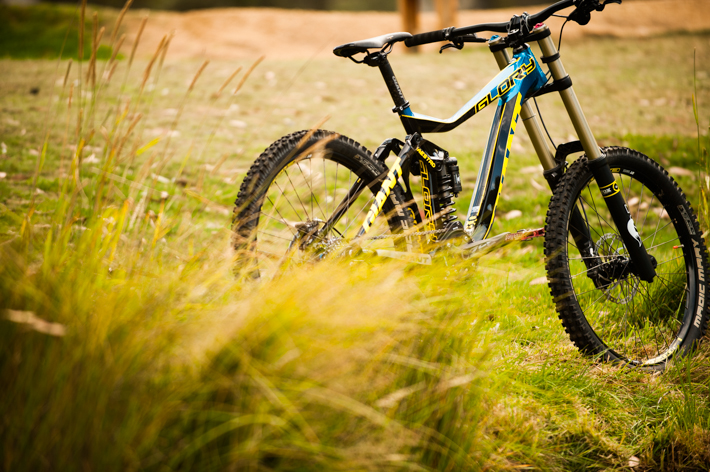 A straight-up legend in Pro DH racing, developed with pro riders like Danny Hart, this is tour fast track to the podium.

With 8 inches of fully active Maestro Suspension mated to a lightweight, super-strong ALUXX SL frame with a co-pivot shock mount, Glory is the only bike in the world that can keep up with 2011 DH World Champion Danny Hart. With geometry that’s tested and race-proven by Hart and his Giant Factory teammates, plus the stout OverDrive steerer tube design, which provides supreme front-end stiffness and control in the rough stuff, it’s the ultimate confidence boost for the most aggressive DH terrain in the world.