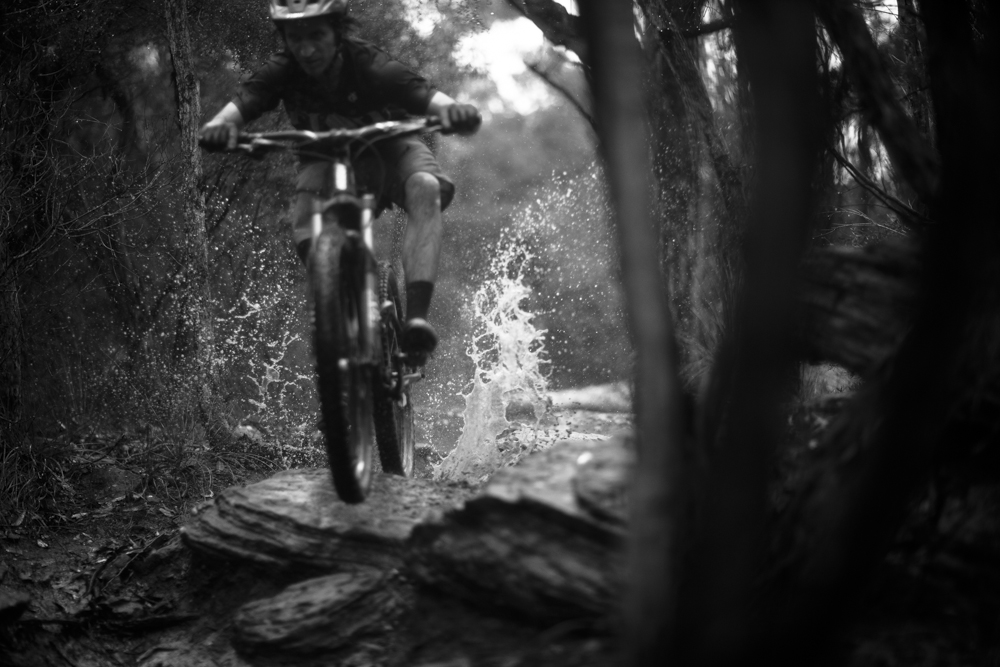 We’re a little over a month into our long term test of the 2014 Giant Trance Advanced SX now and things are going swimmingly, literally in the last couple of weeks as the trails have been a bit swampy.

Straight up, this bike is a riot. A blacked-out package of confidence and playfulness, a 12kg piece of weaponry that turns every rock into a kicker or a landing ramp. It’s everything we’d hoped. We’ll get into the way the bike rides a little more in later updates, but for now here’s a few observations about the suspension and drivetrain.

Suspension: Man, the rear end of this thing is smooth. FOX have really done their best work with the new Float X. It’s like butter, poured over Teflon. It’s a true pain in the arse to adjust the rebound speed, as the dial is really hidden very deep underneath the shock eyelet, but that’s the only gripe.

The 34 TALAS fork has spent most of its time in the 140mm setting so far, only being bumped out to its full 160mm travel for the descents. Unfortunately our fork had a damper problem (sporadic topping out, seemingly at random) and so it went back to FOX. They had it back in less than a week, with a brand new damper installed. While in the workshop, they popped in some new seals and the fork is near frictionless now.

While our fork was back with FOX, a new test fork arrived from Formula – the Formula 35 with 160mm travel. Because the Trance uses Giant’s proprietary Overdrive 2 headset standard (with a 1.25″ upper bearing, instead of the standard 1.125″ bearing) we needed to order a new upper headset assembly to suit. Unfortunately it’s not as simple as just swapping out the upper headset bearing, you need a new headset cup as well. FSA make the whole assembly. You’ll also need a different stem too, which we thankfully had on hand.

With the Formula fork fitted, the entire bike has dropped a bit of weight too, now clocking in at a seriously impressive 11.85kg (without pedals fitted)!

Drivetrain: Any fears we had about the 32-tooth chainring being too small have gone out the window. Even with 27.5″ wheels, we rarely find ourselves in the highest gear. This bike has once again reinforced the idea that it’s important to gear your bike around the climbs, more so than the descents.

The X01 drivetrain is quiet and stable as a sedated Buddhist, though we have thrown the chain once when pedalling out of a very rough, drifty sandstone corner. If it was ever going to happen, this is exactly where you’d expect the chain to drop. We’re not going to fit a chain guide at this stage as we don’t think chain drop will be a regular occurrence.