The GT For Sex, I mean, Force X, is a serious piece of artillery in GT’s fight to re-establish themselves, after a few fairly quiet years on the development front. It’s a big-hitter, a gravity enduro bike with real guts, developed with input from Dan Atherton and the rest of the Atherton clan. 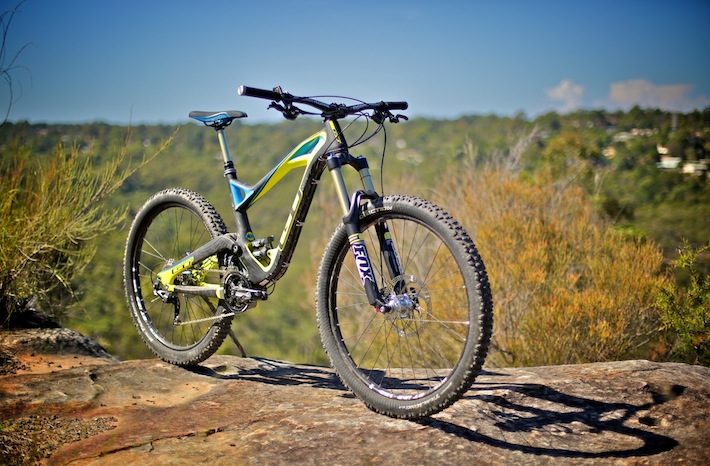 GT’s recent reinvention has won them a lot of fans, or perhaps more correctly rekindled a love that had simply faded a bit, as GT is one of those brands that everyone seems to have a soft spot for.

There are three key models in the range now: the Sensor (130mm), the Force (150mm) and the Fury DH. The Force X (of which there are two variants with different spec) sandwiches in between the regular Force and the Fury. It uses the same frameset as the Force, but with a number of component choices such as a longer travel fork that push its descending credentials a bit harder.

Like a pair of white jeans, the GT screams look at me. The frame has a bulbous well-fed python look to it, and you get the feeling that GT opted for carbon not for its weight saving properties, but its strength and the opportunities for creative frame shapes it provides. The lines are muscular to say the least.

It’s tricked up with all the features too, like an internally activated seat post, a sag indicator to aid suspension setup, a Maxle 142x12mm rear end, and Shimano’s new direct mount rear derailleur system. There are ISCG tabs as well, a feature that is becoming increasingly irrelevant with this new era of single-ring chain guide-free drivetrains.

The new 150mm-travel Angle Optimised Suspension system is one of the more involved out there. Have a look at video below to see it in action. It’s designed to provide the benefits of a high-pivot suspension system but without fewer negative (brake jack and pedal feedback). The bottom bracket is housed in the Path Link, which rotates slightly rearward with the suspension compression so as to minimise the amount of chain growth. It’s a fair bit to get your head around!

A FOX Float X shock handles the damping duties, sitting low in the frame. There’s a neat mud guard slipped in behind the shock too, to offer some well considered protection for the shock shaft. On the topic of protection, you’ll want to wrap the chain stay with some Framewrap to both protect the bike and silence any chain slap, as the bike makes a racket in the rough.

By virtue of the cramped front derailleur / shock mount junction, the cabling is little convoluted. This is one bike that would’ve been far easier to design without having to consider front shifting, but having a good complement of gears doesn’t seem like such a bad option once you point this beast uphill.

This brings us to an issue that can’t be ignored; the GT has a weight problem. Out of the box, the GT is 15kg. Add some pedals and you’re getting into the territory of some downhill bikes. It’s simply too heavy. Fortunately there are a couple of easy tweaks to bring the bike back to a more acceptable figure.

With the scales showing 16.1kg once we’d fitted pedals and a full water bottle, we had to work out where the weight resided in the GT. It didn’t take long to work out that the problem is predominantly in the wheels, more specifically the tyres and cassette.

The Continental Trail King rubber is massive with very stiff sidewalls, but just far too heavy, at a kilogram per tyre. Our first move would be to fit something like a Schwalbe Hans Dampf or Maxxis High Roller 2, both of which would save you 200g per wheel. Then we’d go tubeless (another 100g saving per wheel). GT have done the dodgy with a crappy steel cassette – the HG50 Deore-level cassette is close to 400g. Swapping it for an XT cassette would save 110g and shift better. Finally, we’d go for a single chain ring drivetrain. Fitting a 32 or 34 tooth Raceface, e13 or Wolf Tooth chain ring and removing the front shifter, derailleur, the bash guard and associated cabling will save you at least another 200g.

All up, that’s close to a kilo saved right away, without huge expense, whilst simultaneously simplifying and improving the performance of the bike. Easy!

The rest of the componentry is all good stuff. We’re especially fond of the KS LEV seat post, and the Kore bar/stem combo is great as well, with the huge 760mm bars making you feel like a viking! As with a number of FOX forks we’ve ridden in the past 12 months, the FOX 34 160mm fork was a little sticky in its performance. It only takes 10 minutes to pull the lowers off the fork and we highly recommend you do so in order to lube the seals and change the splash oil. It makes a world of difference.

Our first ride on the GT was what we’d classify as ‘ok’. It felt big – very confident once gravity was on your side – but hard to get moving and not as responsive as many other gravity enduro / all-mountain bikes. Sure the riding position was solid and the frame relished a hard impact, but the bike felt a bit dead. 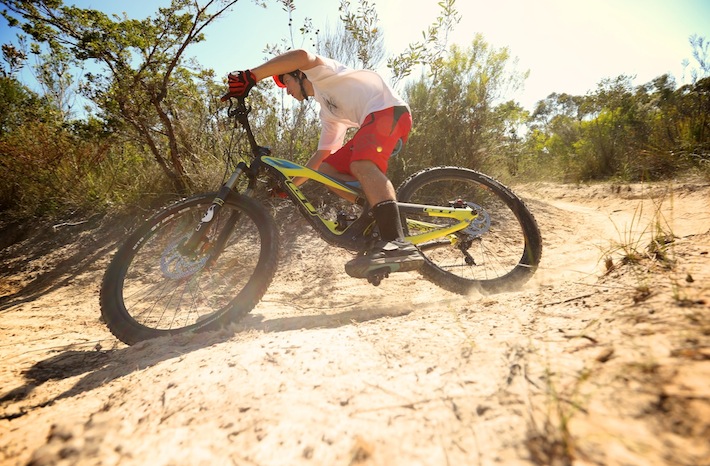 We knew there was a more exciting, lively and versatile bike in there. Softening the suspension a little (30% rear sag vs 25% on our first ride) and speeding up the rebound was the first move; suddenly the ride went from being choppy to delivering the kind of control we’d expect from a high-pivot design and the FOX Float X shock.

We also changed out the wheels, although simply swapping to lighter tyres would have had the same effect. With less rotating weight the GT was much easier to get up to speed or to change direction. The bike’s low centre of gravity suddenly shone, as it became easy to flick the bike from turn to turn. Reducing the unsprung weight (i.e. the wheels) also assisted the suspension’s responsiveness to small bumps. Overall, the bike was suddenly one we could appreciate! 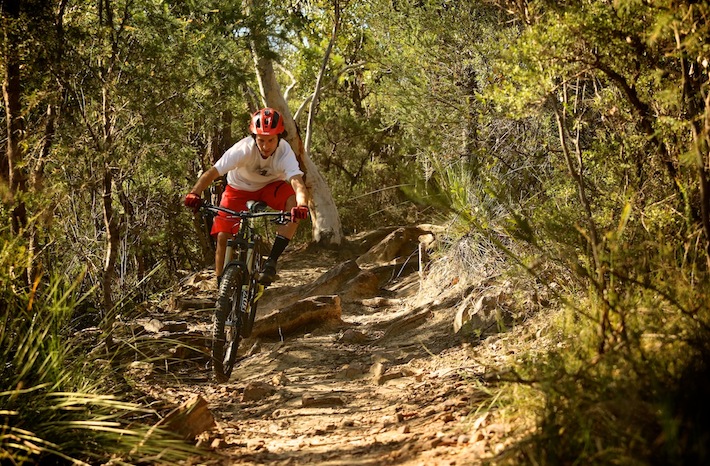 The GT catalogue claims that the Force X has a 67.2 degree head angle, but we’re certain it feels slacker. Either that, or the bike’s willingness to run blindly into the roughest trails just convinces you it must have a more relaxed head angle. With a 760mm bar and a 50mm stem, you’re in a very strong, stable position on the bike and so keeping it on track in the rough is made easy.

This is bike that really likes big hits. The high pivot suspension design is particularly adept at smoothing out sudden harsh, square impacts (rock ledges etc). As you’d have guessed, the frame is robust in the extreme, and it doesn’t give a stuff if you wedge it into situations that would twist or upset a lesser beast. It’s only if you really concentrate in it that you become aware of the bottom bracket moving backward and forward as the suspension moves – it’s certainly not enough movement to upset your rhythm.

Despite its weight, the GT is a reasonable climber. The seat angle is sufficiently steep to keep the front tyre on the ground when grinding up climbs, and rear wheel tracks well under power, rarely breaking traction. In the granny ring, despite the Path Link’s best intentions, you can notice a bit of chain tug though the pedals as the rear suspension works. If your regular riding does include a lot of climbing, the 50mm stem might prove to be a little too short as well, as the riding position does become pretty cramped when you shuffle forward onto the nose of the saddle.

Whereas some all-mountain bikes have a fairly even split in terms of descending and climbing performance, the Force X unreservedly leans towards the descending end of the spectrum, so keep that in mind if you’re looking for a ride that can handle the odd day shuttling the local downhill track. Make the changes we’ve recommended in this review to drop some weight and get most out of this bike, because it has some savage potential as a gravity enduro / all-mountain bike. Of course, you could also look at the Force X Pro, which already comes with lighter, tubeless wheels and a single-ring drivetrain! 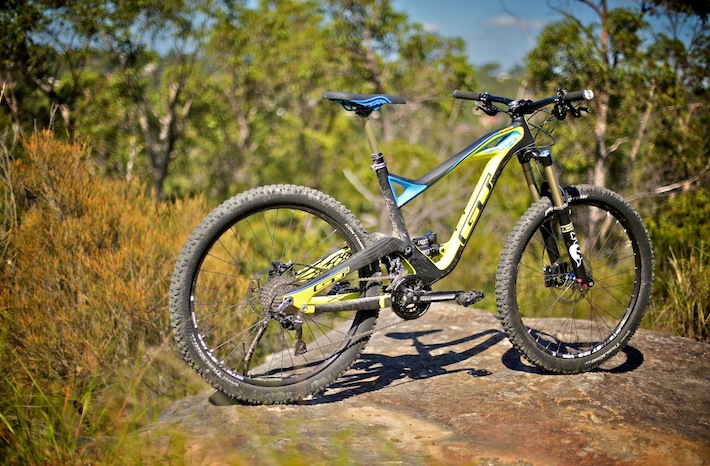