Straight outta Colorado, this MRP Stage fork has been copping a good old flogging around our rocky testing grounds of Sydney's trails. The 150mm travel 27.5" fork owns plenty of unique features to set it apart from the big guns from FOX and RockShox, but are they enough to put this small player in the same class?

All MRP forks are hand-assembled in Grand Junction, Colorado using entirely metal internals and an extra large oil volume to give the Stage a whopping 200 hour service interval. MRP may be better known for their excellent chain guides, but after licensing the suspension brand White Brothers many years ago and more recently purchasing the Canadian rear shock manufacturers Elka, MRP have rebranding all their suspension components under the MRP moniker and they’ve been gaining momentum at a rapid rate with availability in Australia too.

The Stage comes in many flavours, from 140-170mm of travel, in both wheel sizes, attached with an Australian price tag of $1495 from your local bike shop. Built for the enduro and all-mountain crowd who might appreciate something a little different from the duopoly of FOX and RockShox, it uses 34mm diameter glossy black legs, a 15mm quick release axle, an understated matte black chassis with different colour graphic sticker kits supplied to individually match your ride. Weight is 1990g, a touch heavier than the comparable RockShox Pike and FOX 34.

Inside the Stage is what really matters, there’s magnets in the compression and rebound damping units and the external Ramp Up dial is super-trick. 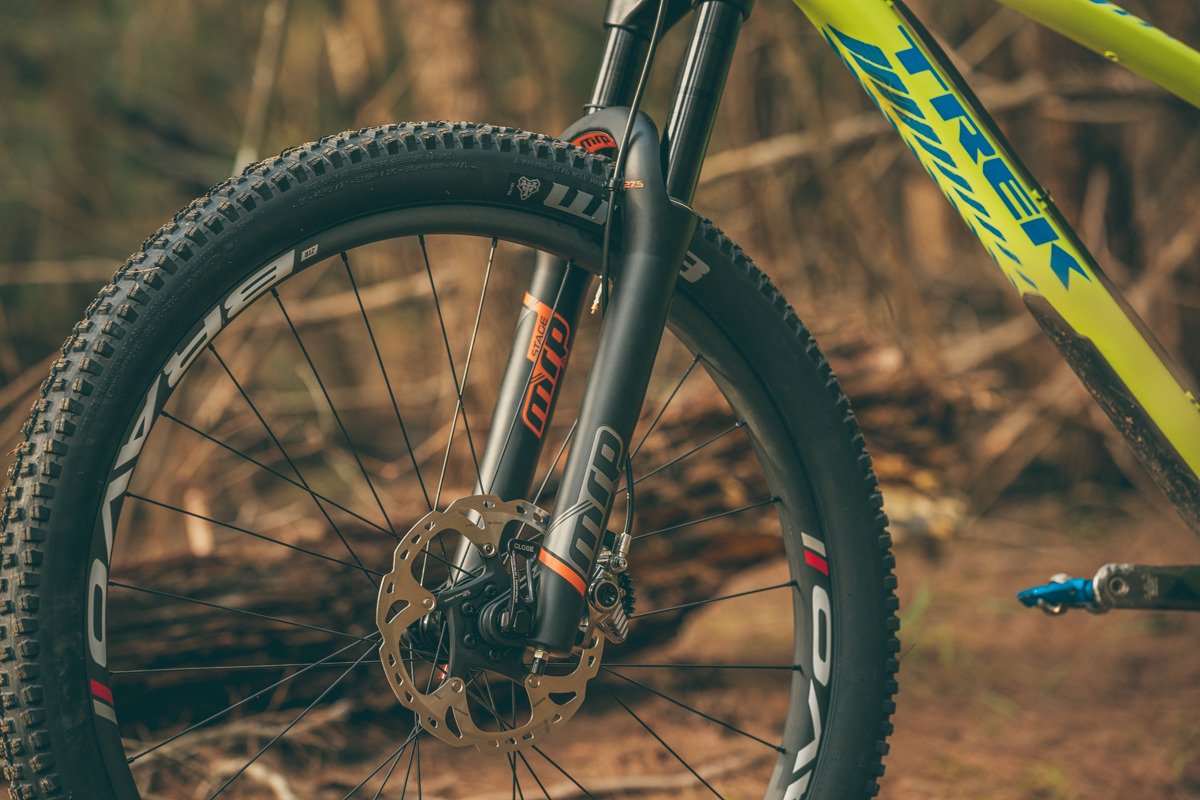 Air pressure setup is via a valve on the underside of the left leg, rebound speed dial on the other side, a compression/lockout dial up the top of the right leg but more interesting is the ‘ramp-up’ or air spring pressure adjustment on the upper left side. 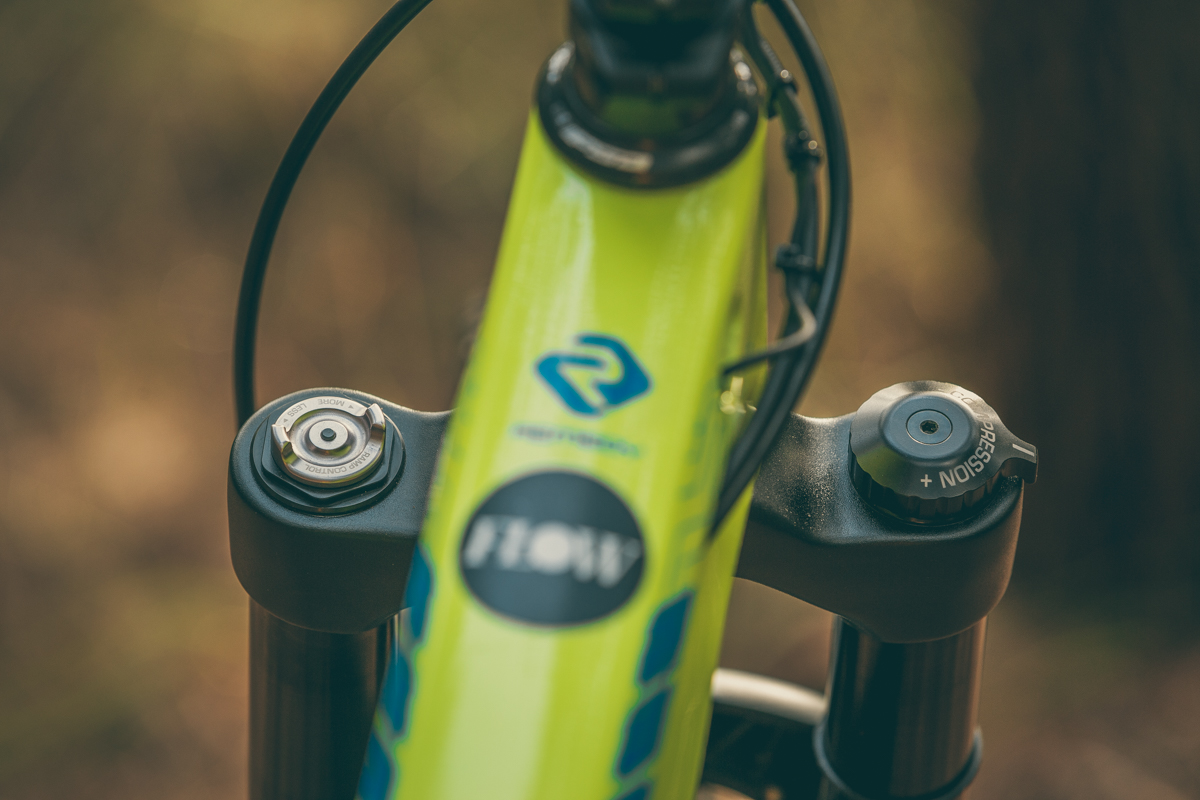 The Ramp Up adjustment gives you a level of accessible tune-ability that typically requires the use of tools and the installation of air volume spacers (like a RockShox Bottomless Tokens for example) but in this case the adjustment can even be made whilst riding.

By dialling in the adjuster the air spring will be reduced in size, and with a smaller air chamber comes a more progressive spring rate that will make it harder for the fork to bottom-out. Master the use of this in tandem with the air pressure and compression and you’ll really be able to make the most of the fork to your liking.

The little black button in the centre of the ramp-up dial is an air bleed valve, giving the rider quick and easy access to the spring by letting air out to reach the desired sag height. This is a nifty feature as the air valve is out of reach from the rider on the underside of the fork, and depressing it runs the risk of spurting out some of the lubricant fluid that resides in the air spring chamber.

But be sure to not accidentally press it during a ride, it doesn’t take much for all the air to be lost and you get a totally deflated feeling. 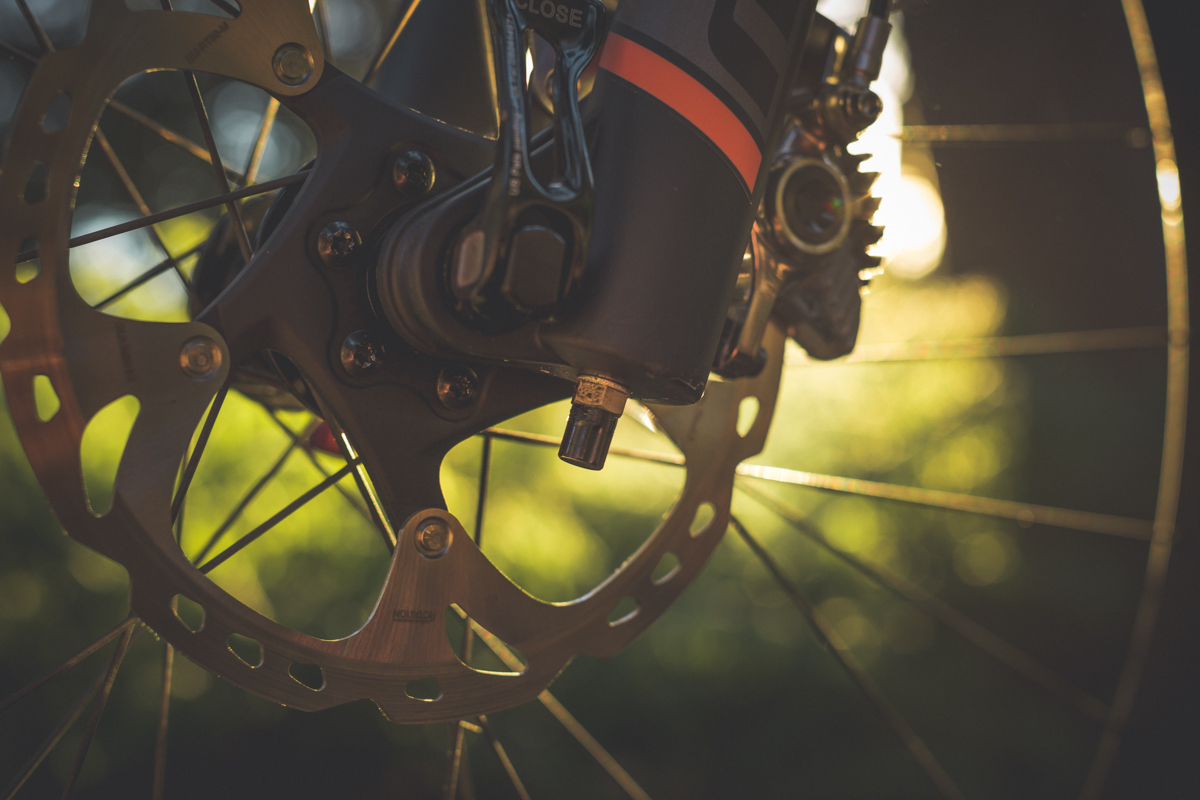 Compression is a single adjustment controlled by a large sweaty hand and glove friendly 8-position dial on the top of the right leg. Where high end forks from RockShox or FOX have two independent and individually adjusted compression circuits, the Stage uses just one adjuster that manages its dual chamber air spring with a unique magnetic blow-off valve allowing the fork to react from fast impacts even when dialled in.

Provided with the fork is a small cheat sheet card that’s crammed with setup advice and base settings to help with personalising the fork’s feel, and they’ve done a pretty good job with it indeed, we certainly found it quite accurate. Whilst the Stage is quite simple in terms of adjustability, it’s worth taking the time to fully understand how the air pressure setup procedure works, and to follow the steps closely. 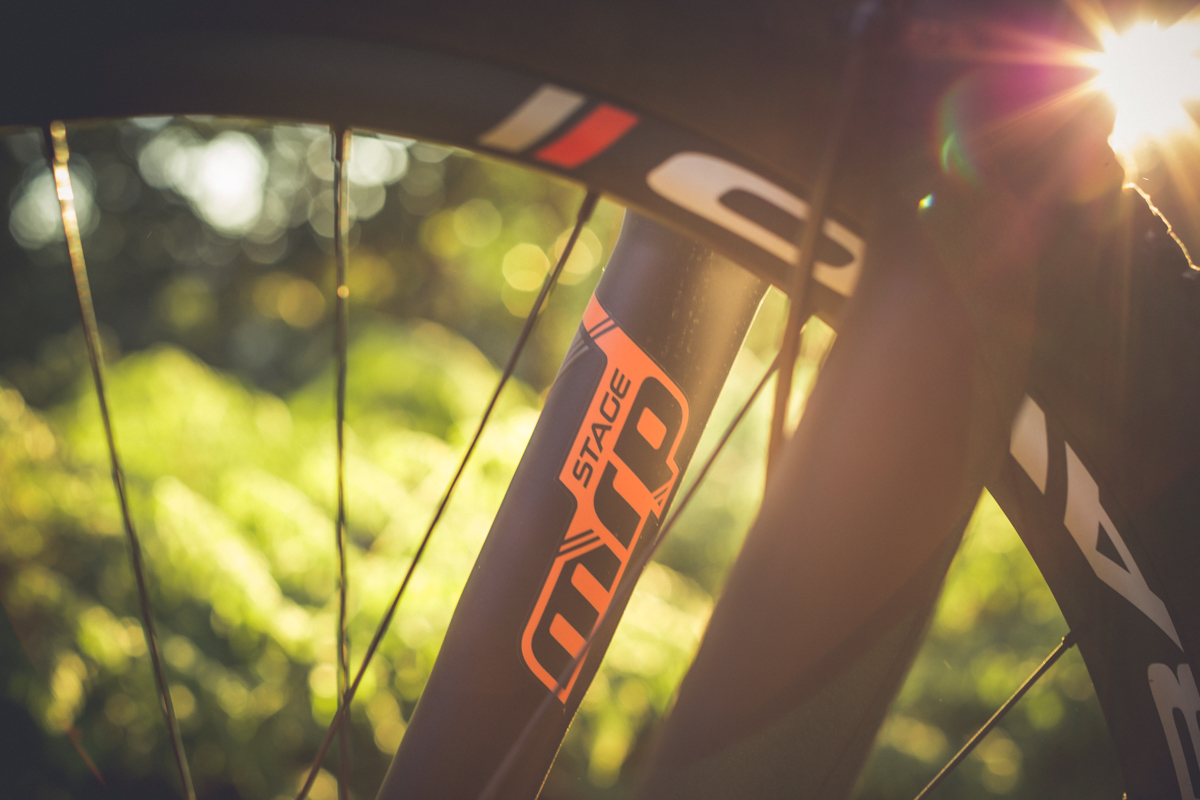 First you inflate the air chamber higher than you need to, then manually extend the fork (by holding the wheel down and pulling up on the bars) to fill the negative air chamber. To set the desired sag you simply start with higher pressure and by pressing the little black air bleed button you let air out until the desired pressure is reached.

The Ramp Up adjustment can be tuned any time, and is quite obvious when played with. Our best advice would be to get out on the trail and ride a short 30 second section repeatedly with a different setting to find your match. We also found we could run slightly less pressure when counteracted with increased Ramp Up and a couple extra clicks of compression, for a plusher initial portion of travel.

Once we were happy with the setup we hit the dirt to get a feel for it, it wasn’t until our second ride we felt entirely sure it was bedded-in and working as smoothly as it should. It needs a good bounce to get its juices flowing if it’s been sitting still for at least a couple days.

The Stage feels nice and supple and sensitive on the trail, reacting to the slightest impacts well. The chassis certainly felt amply rigid and stiff, we quickly got used to it on the front of our Trek Remedy and we began to ride it harder and harder with good confidence.

The first portion of travel is very supple and takes very little force to begin compression. 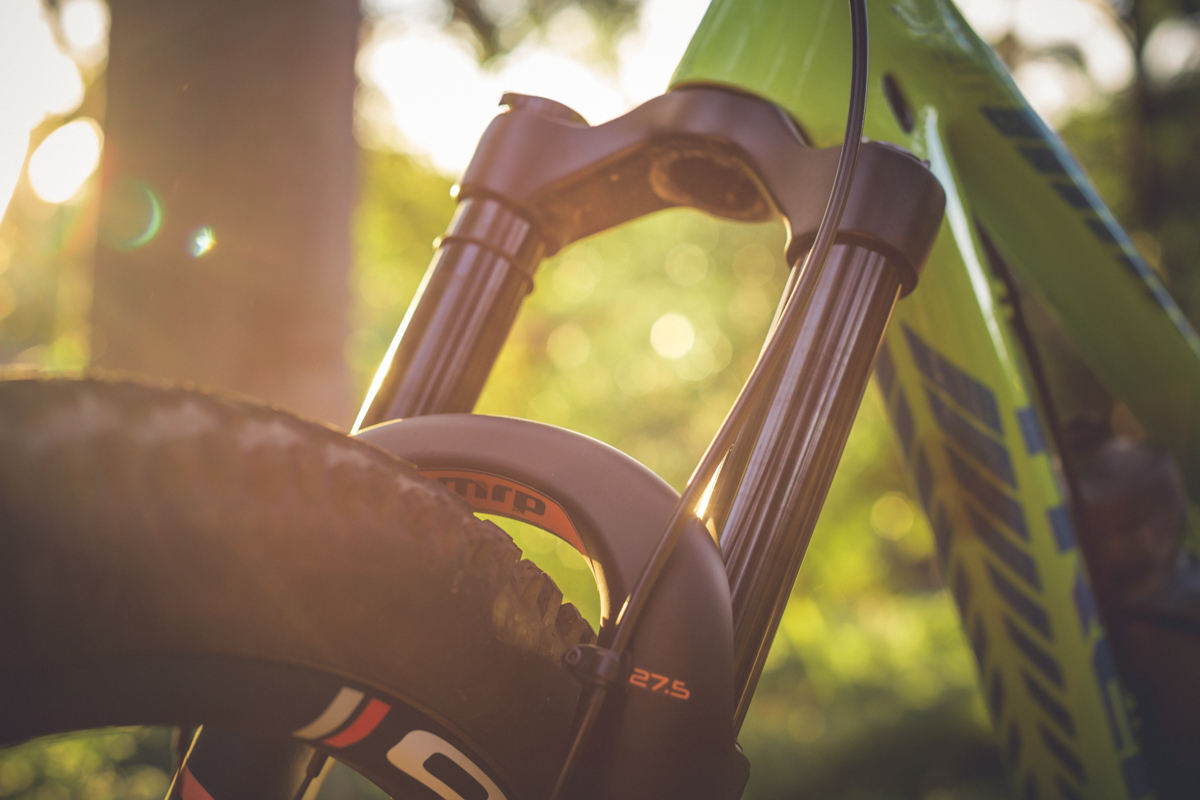 Fine tuning the Ramp Up on the trail was as easy as changing gears, and remarkably effective. A few turns of the big silver dial makes the latter portion of the travel significantly harder to get to, and we found ourselves changing it a few times during each ride to suit the trail. With less Ramp Up the fork feels ultra supple and plush, suited to flatter terrain, but when the trails got steeper and impacts grew in force we’d benefit from dialling it in to help the fork ride higher in its travel, especially under front wheel braking.

The single compression dial was effective in cancelling out dive and bob on the climbs, even when cranked on there’s no harsh spiking if you happen to hit an unexpected impact. We lamented the lack of slow speed compression adjustments seperate to lockout though, we’re big fans of using plenty of compression to hold the fork up rather than a hard spring.

On the longer descents the Stage remained composed at all times and very predictable, you always knew where you were in the stroke, and never did a loud bottom out or harsh spike disrupt our flow.

How does it compare to the FOX 34 or RockShox Pike?

It’s a tall task taking on the big dogs of the industry, but in our opinion MRP do a pretty good job. In terms of value and long proposed maintenance interval maintenance the Stage is very impressive, and its on-the-fly Ramp Up adjustment has serious appeal to the type of rider who appreciates easy and obvious tuning.

Chassis stiffness is on-par, but weighs more than the competition. Wheel removal isn’t as simple as the FOX QR15 or RockShox Maxle, the MRP’s skewer system just takes some getting used to.

It’s the damping that sets the MRP apart from the best in the business. We’ve seen the FOX FIT 4 forks and RockShox forks with the Charger damper really take the support and control of mountain bike suspension to amazing levels, and new players DVO have also really stepped it up but we feel that the MRP Stage isn’t quite up there with the best. It simply lacks the mid-stroke support and rapid reaction to impacts while already into the travel. We spent plenty of time tinkering with all the adjustments to make the fork ride high in its travel, but never without sacrifice to bump sensitivity.

Put an MRP stage on the front of your bike and you’ve got a premium piece of kit leading you into the trail, that won’t let you down. This quality product hand assembled in Colorado might not have the highest performing damper in the business, but it certainly stands out in terms of maintenance and ease of adjustment and never faltered once during our testing period. 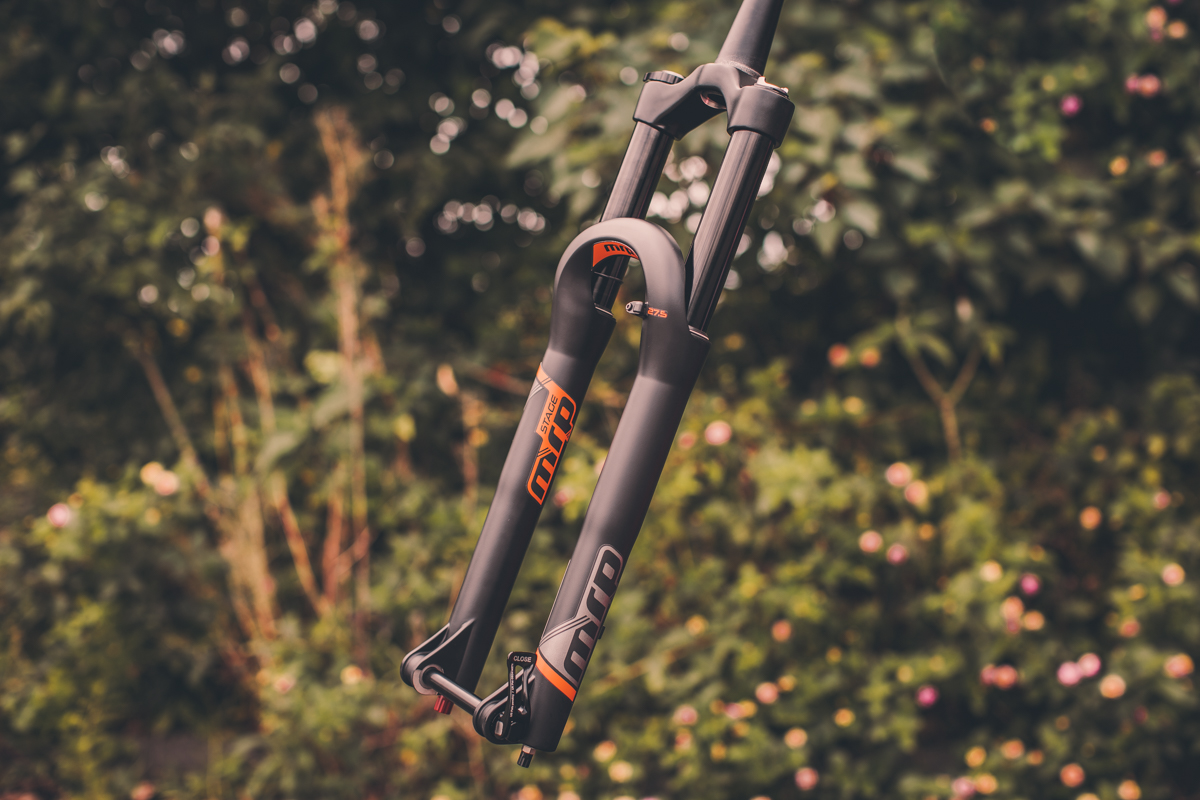