Norco’s bikes haven’t just come on a little bit in the past four or five years. No, they’ve improved astronomically and the Sight range is really indicative of all that progress. A couple of years ago, Norco launched the Sight in a 26” wheeled variant, but for 2014 it undergoes the shift to 27.5” wheels whilst retaining that trail-friendly 140mm of bounce.

We picked up a Sight Carbon 7.1 and took it to singletrack Nirvana, Rotorua, for five days of guess what?

The Sight’s the best looking Norco we’ve ever seen; clean shapes, the contrasting matte and flourescent colours and the smart little finishing touches had us drooling over the Sight at first sight.

With the move to a carbon front end, 25% of the grams are gone. Like a number of manufacturers, Norco have opted for a carbon front end and aluminium chain stays out back. We like this method of construction, as the rear end is the part of the frame most susceptible to crash damage, while the front end is largely protected by the bars and cranks.

Norco have taken a step in the right direction with internal cable routing, including some neat rubber grommets do prevent dirt or water accessing the frame. But during our testing the rubber cable grommets occasionally pulled loose, making making a bit of a mess, and requiring us to stop and wedge them back in periodically. 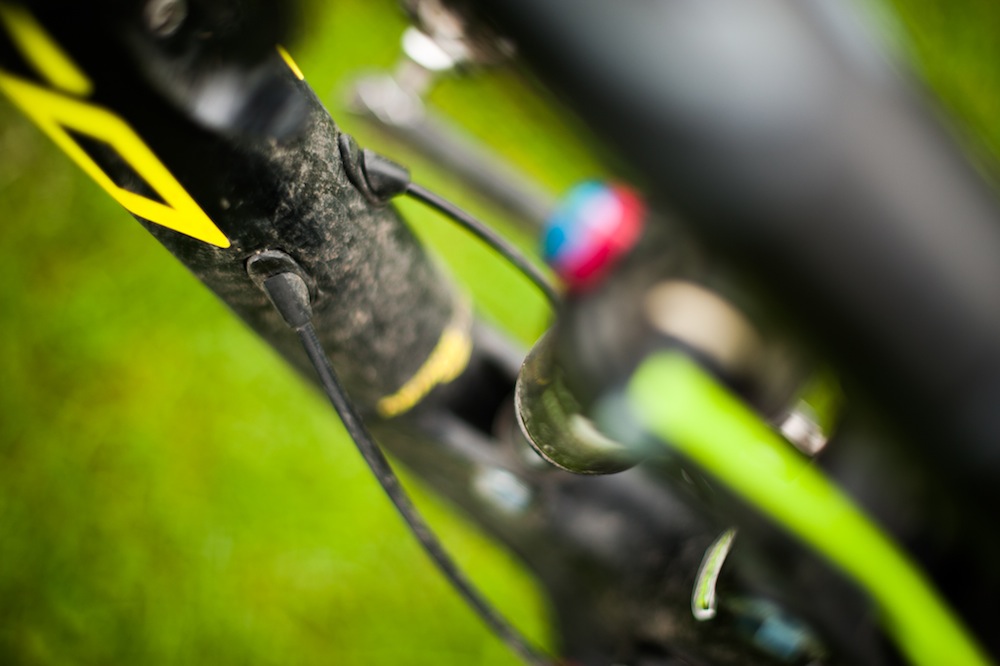 A ‘true’ four-bar suspension design makes it all happen out the back, with Norco’s A.R.T. take on the well-proven system. The placement of the suspension pivot on the chain stay allows for a little rearward rear wheel movement at the start of the suspension travel. This rearward axle path wheel also adds tension to the chain, so if you’re cranking down hard the rear suspension will display a certain amount of anti-squat and the bike jumps forward nicely.

We had some dramas with the pivot hardware coming loose during testing, and because the two main pivots use a spanner and not just Allen keys, it wasn’t something we could fix out on the trail. A spot of Loctite resolved it.

Norco don’t settle for the standard one-size-fits-all approach in regard to the frame’s rear end. As the frame sizes go up, it’s both the front end and chain stays that grow in length to keep the rider’s position centred.

Meaty rubber, four-piston brakes and an adjustable post tells us the Sight is ready for some action, and definitely sways it’s attitude towards the more aggressive side of the scale. The big tyres did feel a bit slow on the flatter trails, but of course the big shoulder knobs held on tight. Still we’d probably opt for some slightly faster-rolling rubber for general trail riding.

We battled with the Rockshox Revelation during our testing, the fork’s action just felt uncharacteristically choppy and harsh, not like the usual Revelations we’ve tried. It all came to head when the main seal on the air-spring side came free from the lowers with a loud POP. We think that air had seeped from the negative air chamber into the lower, resulting in a build up of pressure that ultimately popped seal out. We pulled the lowers off, reset the seal back in place and changed the lubricating oil and the result was immediate improvement. Still, the fork was never quite all we’d hoped for.

SRAM’s X01 gear is simply spot on, but the brakes are a bit weak on bite, especially in the wet. We’d recommend swapping out the original resin brake pads for some metal sintered ones.

The Sight left us with mixed feelings. The efficiency of the bike is great. It pedals brilliantly, even with the heavy rubber fitted, and in spite of its slack angles it’s easy to keep it on track up a steep climb.

Low weight and a very stiff frame give the Sight a precise feel; it never seems to doubt the direction you take. The lowly slung top tube and wide bars really allow you to tip the bike right over beneath you too, adding to the agility of the ride.

We were less impressed by the suspension feel overall. Perhaps our impression was influenced overly by the fork’s problems, but the ride never felt ‘alive’. The Norco prioritises stability on the big hits over suppleness. Some riders will revel in this firm feel, but when compared to some of the other bikes we were reviewing alongside the Norco, the suspension just felt a bit lacking.

This was admittedly a very big surprise, as most new-generation Norcos we’ve ridden have been incredible – it does make us wonder if there wasn’t some issue (like the wrong shock tune) with our bike that could have been resolved with a longer testing window.

Our short time aboard the Norco may have brought a couple of teething issues, but sorting them out would not have been to much of an issue and we’re certainly positive about the overall potential of this bike. The frame, geometry and component selection are all excellent and with a lighter set of tyres set up tubeless the Sight could hit an impressively low weight. Although we didn’t entirely mesh with the bike’s suspension,  the geometry, looks and ability to hold a line on the roughest trails all make for a great platform to build a dreamy trail bike.

Delivering a perfectly balanced and incredibly efficient ride experience, the 2014 Sight Killer B is the complete package for modern trail riding. A short, ultra-stiff rear end, low BB and slack head angle speak to a ride that begs to be ridden as far and as fast as you dare. The Sight’s trail-tuned A.R.T. suspension system powers riders to the top of the steepest climbs and delivers grin-inducing playfulness and confidence-inspiring capability on the downs. For those who always take the lead in a pack, the Sight Killer B is the ultimate trail weapon.