Much like Pokémon Go swept the world by storm earlier this year but is now nowhere to be seen, trends in the mountain biking world come and go. 4X, anyone?

But one style of riding which isn’t going anywhere is the good ol’ ‘plod to the top, shred till you drop’ – it’s what we’ve all been doing for years, the difference now is we’ve got bikes and race formats specifically targeting this style of rider and riding.

You’re probably wondering where the hell we’re going with this? Well, the big, brash and bold reincarnation of the Pivot Firebird optimises the current ambitions of many trail riders out there- plodding along to the top having a yarn, and riding the descents hard and fast. Unlike Pokémon Go however, we don’t think bikes like the Firebird will fade into obscurity.

Heading to Thredbo? We’d suggest you give the Makin Trax Basecamp a try. They hosted us for our week in Thredbo, and it was the perfect setup for our crew of six riders. With five bedrooms, to sleep up to 12 riders, a huge kitchen, an open fire and plenty of space to store your bikes, it’s just bloody ideal. They’re doing some great accommodation and lift pass packages too. Take a look! 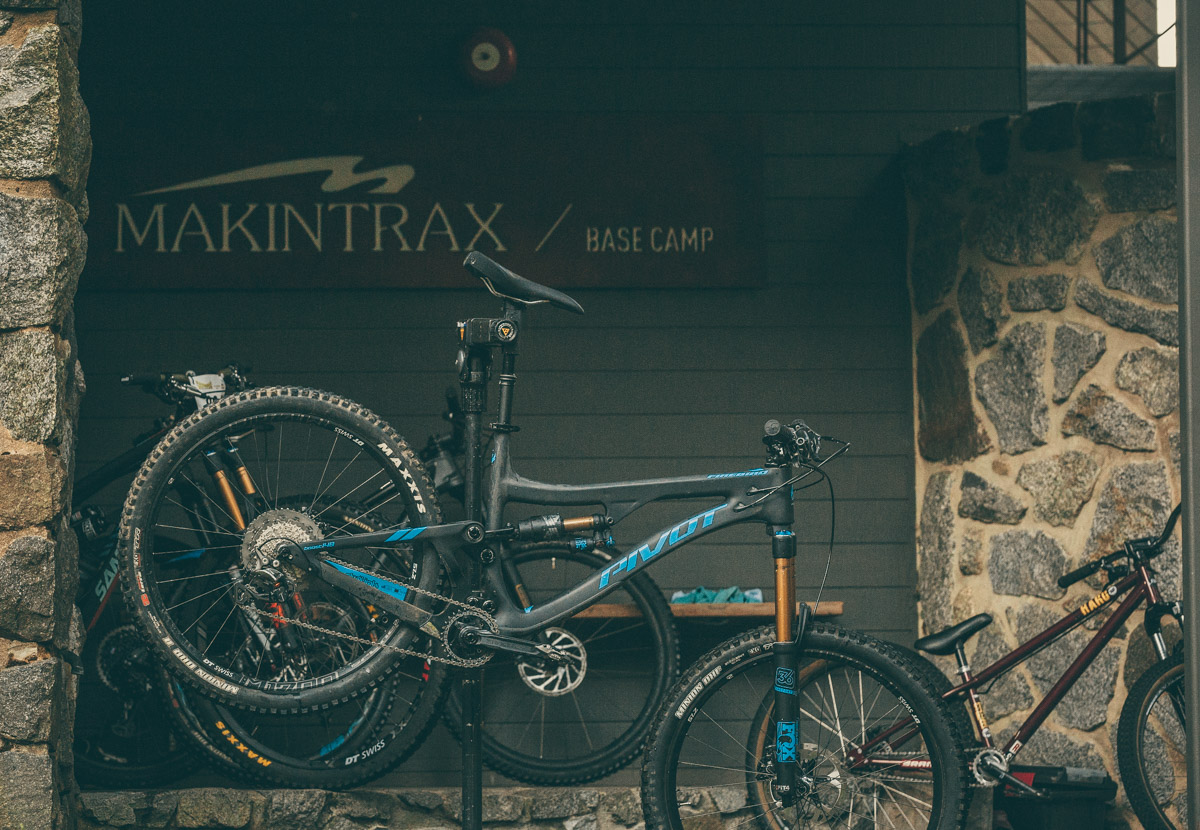 What’s the Pivot Firebird all about?

We covered off a few of the basics about the reinvigorated Firebird’s geometry and construction in our First Bite, but put simply the Firebird adheres to the long, low and slack formula that tends to be the standard for bikes with more than 150mm of travel in 2016. Pivot have combined a modern geometry with 170mm of travel front and rear, and even on our first ride, the plushness of 170mm of DW link suspension blew our minds. It’s got that same bottomless feel you’d normally associate with a full blown downhill bike.

Where does the Firebird shine?

It’s not going to surprise anyone that this bike is an absolute beast downhill. Most of this bike’s testing took place in Thredbo, and the Firebird was not afraid of the rocky, technical Cannonball DH track. We mused in the First Bite that the capabilities of the bike’s tester would be reached before the bike itself, and that was very much the case.

In terms of ploughing through rock gardens, committing to loose, high speed sections and taking the gnarly lines, the Pivot never felt out of its depth- it was always the rider pulling the pin before the bike lost control.

On high speed sections, as well as wide open turns, of which Thredbo has about a million, the Pivot felt exceptionally stable thanks to its long wheelbase and low bottom bracket. Combined with a rear end that grips the trail like Velcro, we never felt like we were skipping around through braking bumps, or being taken off line in rough sections. If you point the Firebird in the general direction you want to go, it’ll get you there.

This is a bike that much prefers to plough through disrespectfully than tiptoe its way along the trail.

What about jumping, and flicking the bike around on the trail?

In the air the Firebird is very stable. Come up short or land awkwardly, it will save your bacon – we definitely rolled out of some situations where other bikes might’ve bucked us off. In terms of using little hops or transfer lines in the singletrack however, the Firebird felt sluggish- this is a bike that much prefers to plough through disrespectfully than tiptoe its way along the trail.

The Firebird has a similar sluggishness when pulling the bike up into a manual. We don’t see these observations as criticisms however, a bike this long and with this much travel is never going to be a bike you can throw around like a shorter travel trail weapon.

If it’s fast and open the Firebird excels, but what about when the trail gets tight?

Another area where we noticed the Pivot’s slackness and length was in tight turns. Getting the Pivot to corner tightly required either some serious body language to muscle the bike, or forethought about using an endo or cutty to whip the bike around.

Whilst the Pivot didn’t love slow speed, tight turns, the bike had a remarkable ability to pull us through some terrible line choices in the corners. The long front centre, ample amounts of suspension and excellent rubber allowed us to move around the bike with the knowledge that there would be traction available almost all the time, and we could exaggerate our weight distribution to wrestle the bike through corners where we’d entered on some pretty poor lines.

What about climbing, or less technical singletrack?

The Pivot climbs remarkably well considering it’s a 170mm bike. The low speed compression lever on the shock was excellent for firming the bike up not only on longer, smoother climbs, but almost all the time when the trail points up. As the Firebird is such a long travel machine, the shock does bob a fair bit when it’s left open on the climbs, so utilising the compression lever (which doesn’t lock the shock out completely, and still allows the suspension to maintain traction up technical climbs) gives a much more efficient pedalling platform for climbing.

Climbing tight switchbacks and technical terrain will see you shuffling right forward in the saddle –  you need to focus on putting weight over the front to stop the front wheel from wandering like a lost child. This is always going to be the price for a long, front centre and a stubby cockpit- you can’t have it all!

On less technical singletrack and undulating terrain the Pivot did an admirable job of hiding its 170mm of travel, but it would not be our preferred bike of choice for long days of meandering singletrack. The bike’s descending focused geometry and spec make razzing through flatter singletrack, pumping undulations for speed and putting sharp bursts of effort in on the trail noticeably more difficult than on a 140mm trail bike.

How did the spec perform?

We discussed in the First Bite our approval for Pivot deciding to provide continuity within the Firebird models by speccing Fox suspension and Maxxis Minion tyres front and rear throughout the range, and this approval was warranted, as these critical components provide so much of the confidence the Firebird oozes out on the trails.

The tuneability and dominant performance of the Factory level Fox suspension allowed us to dial in the ride qualities of the Firebird, and the beefy tyres mounted to wide rims gave us confidence in laying the bike over in all sorts of conditions. An aggressive intent is pivotal to getting the most out of the Pivot, as with so much bike underneath you you can really throw it around quite recklessly.

The 1×11 Shimano drivetrain, a mixture of XT with an XTR rear derailleur worked excellently, however we were confused at the lack of chainguide as standard considering the intentions of this bike, and the meticulous attention to detail in other areas of the spec.

The new DT Swiss M1700 wheels, with a 30mm internal rim width were strong and reliable, and other excellent touches included the Fox Transfer dropper post, and the stylish and ergonomic Pivot cockpit.

What other builds does the Firebird come in?

As mentioned above, the lack of chainguide confused us. If you’re riding this bike to its capabilities, the last thing you want to be worrying about is your chain.

The only other complaints we had was the lack of bottle cage mount inside the front triangle, despite there appearing to be space. There are bottle mounts under the down tube, which is great if you like dirt with your water. The low hanging loop of gear cable exiting to downtube and running under the bottom bracket is a little dicey too. On a bike like the Firebird, which is probably going to be exposed to some ragged, potentially off the trail moments, we feel the cable could’ve been routed above the bottom bracket to avoid snagging on trail debris.

So, who exactly is this bike for?

If you place a high priority on descending fast, you’re an aspiring Enduro racer, or you want to boost your confidence on technical descents, the Pivot Firebird is a very worthy consideration. This bike has a clear mandate – to descend as fast as possible whilst still being able to ride to the top. It knows what it wants to do, and does it incredibly well.