Holy Jeebus, this thing is nice to ride!
STIFF
Very efficient
Traction and control is magnificent

Wrongness is easy to define – it’s just not right. But rightness is something a little harder to pin down. What we can attest to is that the Pivot Mach 429 Carbon has maximum rightness, precious little wrongness, and deserves its status as one of the dreamiest bikes on the market. Let’s take a look at the ledger. 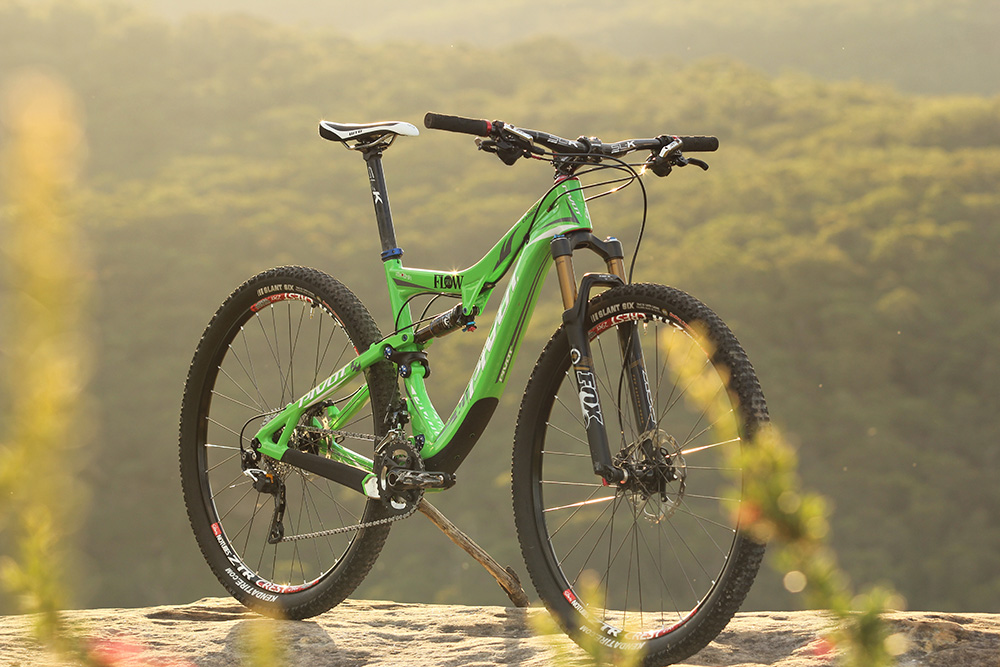 From the moment we slung a leg over the deep curve of the broad carbon top tube, the 429 Carbon spoke to us. It said ‘I’m not afraid.’

‘But you’re just a cross country bike,’ we told it.

‘That’s just a front,’ the Pivot conspired. ‘I’m actually a bad-arse trail shredding machine. Here, let me show you.’ And it did.

The 429 is a deceptive beast. With 100mm of travel front and back, 29″ wheels and typically cross country-oriented angles, you’d be correct in assuming the Pivot’s aim in life is to whip across smooth trails at speed. It does this ridiculously well, just devouring the miles. It would be the perfect machine for a marathon.

But to limit the 429 to mellow, undulating marathon terrain would be a travesty. When the going gets rough, the Pivot is all too happy to roll up its sleeves and go nose to nose with the bigger bikes. A combination of superb suspension and unflappable frame stiffness lets you plough through lines that would cast other bikes aside. Wide bars and a low bottom-bracket height keep you feeling grounded, like you’re in the bike rather than perched on top of it. It encourages you to get off the brakes and off the ground.

Few suspension systems can hold a candle to the DW-link. Under pedalling forces, the performance of the Dave Weagle designed suspension is second to none, making it a real drawcard for this bike.

Other dual-link suspension designs may look similar, but Dave Weagle vehemently guards the patents surrounding the exact suspension configuration of the DW-link. We can see why; it’s a magic combination. The 429 Carbon pedals without any perceptible suspension-bobbing, yet the rear wheel stayed firmly glued to terra firma, even when we pedalled it through the rough. It simply motors up loose climbs. From the smallest trail ripples to walloping big hits, the Pivot’s rear end is ready.

Stiffer than a frozen carrot

In the bike industry’s war on weight, frame stiffness is often the first soldier to take a hit. But a floppy frame is the enemy of confidence – when you command a bike to go somewhere, you want it to respond like a well-trained German pointer. We were delighted to discover that, in this arena (frame stiffness, not dog training), the 429 Carbon is a category leader.

Just have a look at this thing. The head tube, the down tube and the chain stays are simply enormous. The rear end is tied to the mainframe with stout links and capped off with a 142x12mm axle. Does it flex? No sir, it does not.

Until you ride a bike with this amount of frame stiffness it’s hard to appreciate just how much it adds to the bike’s performance. The Mach 429 Carbon settles into a corner and rails hard, and when it does drift, it’s even and balanced from front to rear. Stomp the pedals and yank on the bars and the whole bike reacts as one, launching forward – there’s no disconnect between your hands, the pedals and the rear wheel. When you land a nasty drop or come down from the stratosphere a bit crooked, the bike doesn’t squirm or twist, so its suspension is free to work to full effect. Time and again, the feeling of indestructibility really brought a smile to our faces.

It’s always better to be overdressed than underdressed, and the Pivot is unlikely to be caught looking shabby with this build kit. Top-of-the-line Fox suspension graces the 429, and we highly recommend you take the option of a 120mm-travel fork, rather than a 100mm-travel version we had on our test bike. With a longer travel fork, the bike would blitz the descents even faster.

Pivot has used components that enhance this bike’s abilities in the rough. A 740mm-wide bar and an 80mm stem mightn’t be the usual fare on a 100mm-travel carbon 29er, but they just bring the Pivot’s descending abilities to the fore. Big-bagged Kenda rubber helps too, though we can’t say we agree whole-heartedly with this tyre choice. Not being tubeless ready, the Slant Sixes caused more than a few headaches and sessions with the track pump.

The clump of messy cables clustered above the shock is a persistent frustration for us with Pivot bikes. A blight on the Pivot Mach’s otherwise clean lines, these cables bend and flex and rub against the shock body, and generally make a nuisance of themselves. We’d love to see Pivot run its cables internally through the down tube and along the chain stays, cloistered away from muck.

If you’re a thirsty fella, you’ll be frustrated by the tight fit for a water bottle. Trying to extricate a full-sized 750ml bottle from the compact mainframe while riding is akin to wrestling a Frisbee back from a determined Staffy. On a medium-sized frame, even a 500ml biddon tends to catch on the shock’s ProPedal lever. Install a side-loading bottle cage to make the process a bit easier.

A tornado of awesomeness, the 429 Carbon blew us away. The more time we spent on this bike, and the more we ogled it, the greater our appreciation for its abilities and its attention to detail. The 429 Carbon fills you with confidence, it transcends the boundaries of what a cross-country bike should be capable of and is guaranteed to make you faster. It’s all kinds of rightness.

There’s just something special about the Mach 429 carbon. Every single magazine test rider, every customer that owns one, and every person that has had a test ride on the 429 carbon cannot believe the incredible stiffness and precision.

It’s as if at some point everyone accepted that a 29” full suspension bike was not going to be as stiff as their 26” counterparts…that is, everyone but us.

With Pivot’s exclusive hollow box internal molding technology, and attention to detail, the Mach 429 carbon goes where you point it, accelerates with authority and gives the 29er rider a level of precision and performance never before experienced.  The perfectly tuned 4” (100mm) of dw-link suspension and incredible pedaling performance just add to the fun.  It accelerates with the efficient immediacy of a hardtail, only you won’t feel the bumps, and descending on the Mach 429 will put most 5” travel bikes to shame.

The Mach 429 carbon delivers a perfect balance; taking all the riding efficiencies of 29” wheels and delivering the handling characteristics of a 26”.  It will make short work of any climb, descents a breeze, all with the comfort and efficiency of a dw-link Pivot so you can ride your best all day!

•    100mm travel dw-link® suspension design with position-sensitive anti-squat makes for a 29er that pedals, accelerates and handles like a 26” wheel bike.