“Oh my. That's horrendous.” Like many internet warriors across the globe, we were quick and brutal in our judgement of Polygon’s new XQUARONE EX. Three months later, and we’ve certainly changed our tune. In fact, we think this is one of the most incredible bikes we’ve ever tested here at Flow.

Bafflingly good as an all-rounder.
More grip and momentum than should be possible.
Climbs like a demon.

Watch our full video review below: 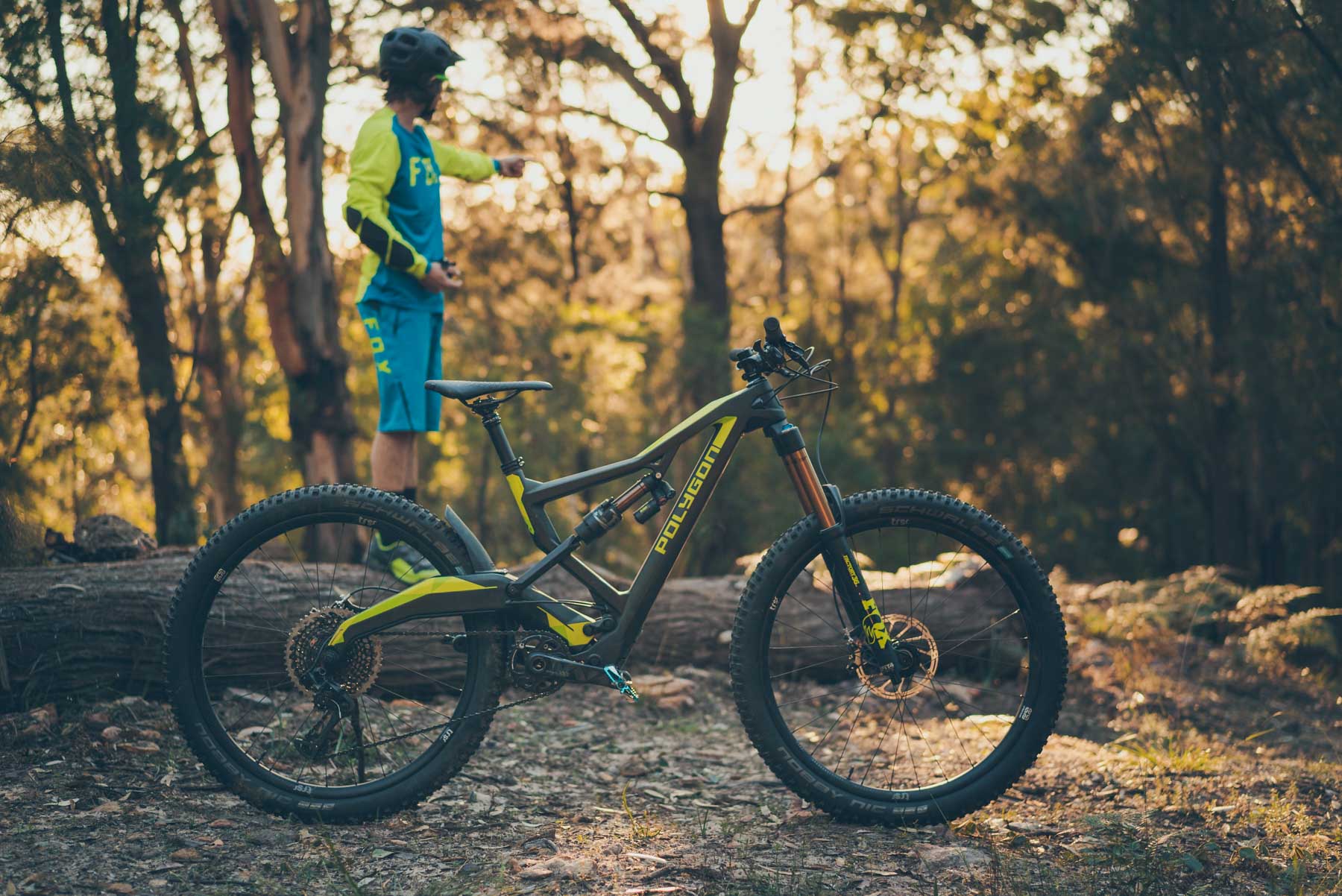 No, it’s not really, we promise. Pictures just don’t do this bike any favours. It’s unconventional, for sure, but when you see it in the flesh it’s far more impressive than offensive. In an era where bikes seem to settling into a couple of broader frame layouts/configurations, the shape and design of this bike was always going to be divisive, but we like it.

What the hell is going on with that rear suspension?

The Nailed R3act 2Play suspension system is like nothing else on the market, and in many ways it’s the key to the Polygon’s abilities. This bike is really a partnership between Polygon and Darrell Voss, the designer of the R3act suspension system. And don’t be surprised if you see this system appearing under license with a variety of other brands very soon (Marin are also using this system already).

We’re still not 100% certain how the system does what it does so well.

We recently interviewed the system’s design, Darrell Voss (we’ll be publishing it in full soon), and to be honest we’re still not 100% certain how the system does what it does so well.

Perhaps the most unusual aspect of the system is hugely decreased reliance on damping when compared to other bikes. The FOX X2 shock is has been de-tuned, with roughly half the damping applied to the oil flow compared to a regular version of this shock. In fact, twiddling the adjusters had no perceptible impact on the bike’s performance. This makes setting up the bike’s suspension a very fast process. Set your sag at about 25%, then go ride, no dial twiddling required.

You’re left with a bike that simply grips the terrain like crazy.

The conventional wisdom is that damping is essential to control the suspension’s motion, and with so little damping you’d expect the ride to be like an uncontrolled pogo stick, and indeed when you bounce around in the carpark, that’s what it feels like. But the moment you get onto the trail, this sensation disappears entirely, and you’re left with a bike that simply grips the terrain like crazy.

We’re paraphrasing Darrell Voss’s explanation here, but in a nutshell, when you apply damping to the rear wheel’s motion, you lose energy, and you impede its ability to grip. By reducing damping, you free up the rear wheel to follow the terrain, and allow it to get out of the way of impacts.

But surely with so little rebound damping, you’re going to be thrown over the bars?

That’s what we thought too, and so it was with a bit of trepidation that we approached hitting jumps initially. But strangely enough, the anticipated ejection out the front door never happened. Again, we can’t really explain it, but at no stage did we have even an inkling of getting bucked. The bike just sucked up the hits and stayed calm.

The Polygon simply carries more speed through rough terrain than any other bike we’ve ridden. 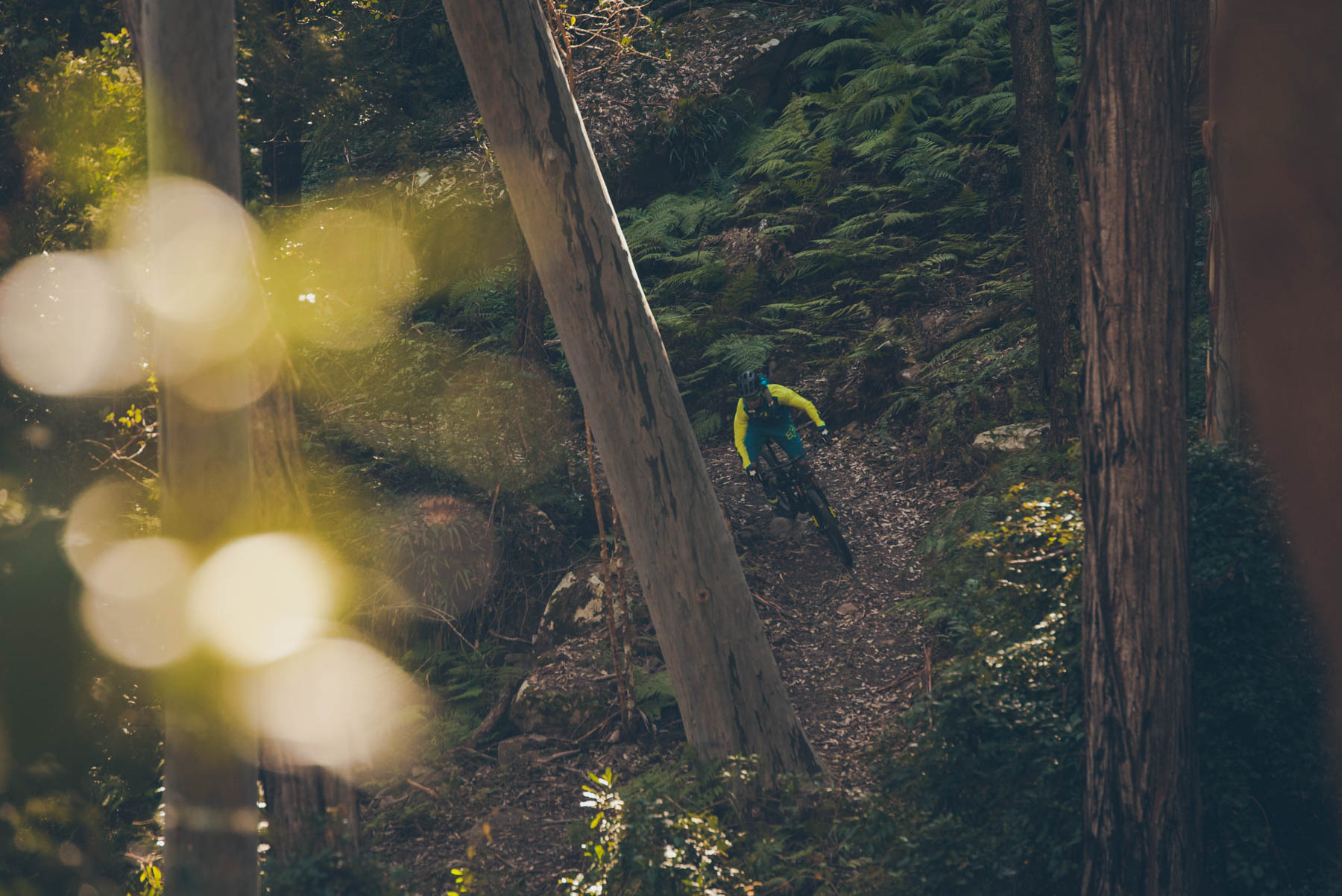 What does this all mean for the descents?

Put it this way: on trails we’ve ridden dozens of times, we found ourselves having to relearn our braking points. The Polygon simply carries more speed through rough terrain than any other bike we’ve ridden – it is faaaaaast. It gobbles up repeated hits and chunder, accelerating down the hill, getting speed out of every backside. You don’t have that feeling of getting bogged down and having to work to maintain momentum.

It swallows up big hits too, and while the shock’s o-ring told us we’d used all the travel, we never felt it bottom out.

As part of our review of the Polygon XQAURONE, we spent a weekend up at the new Trailshare Cabins, Kulnura, just over an hour out of Sydney. This place is remarkable: over 20km of private trails, in beautiful blackbutt and turpentine forest, rider-friendly sustainable accommodation. It really is a little piece of paradise, and we’re certain we’ll be using it as a base for a lot more bike testing in the future. 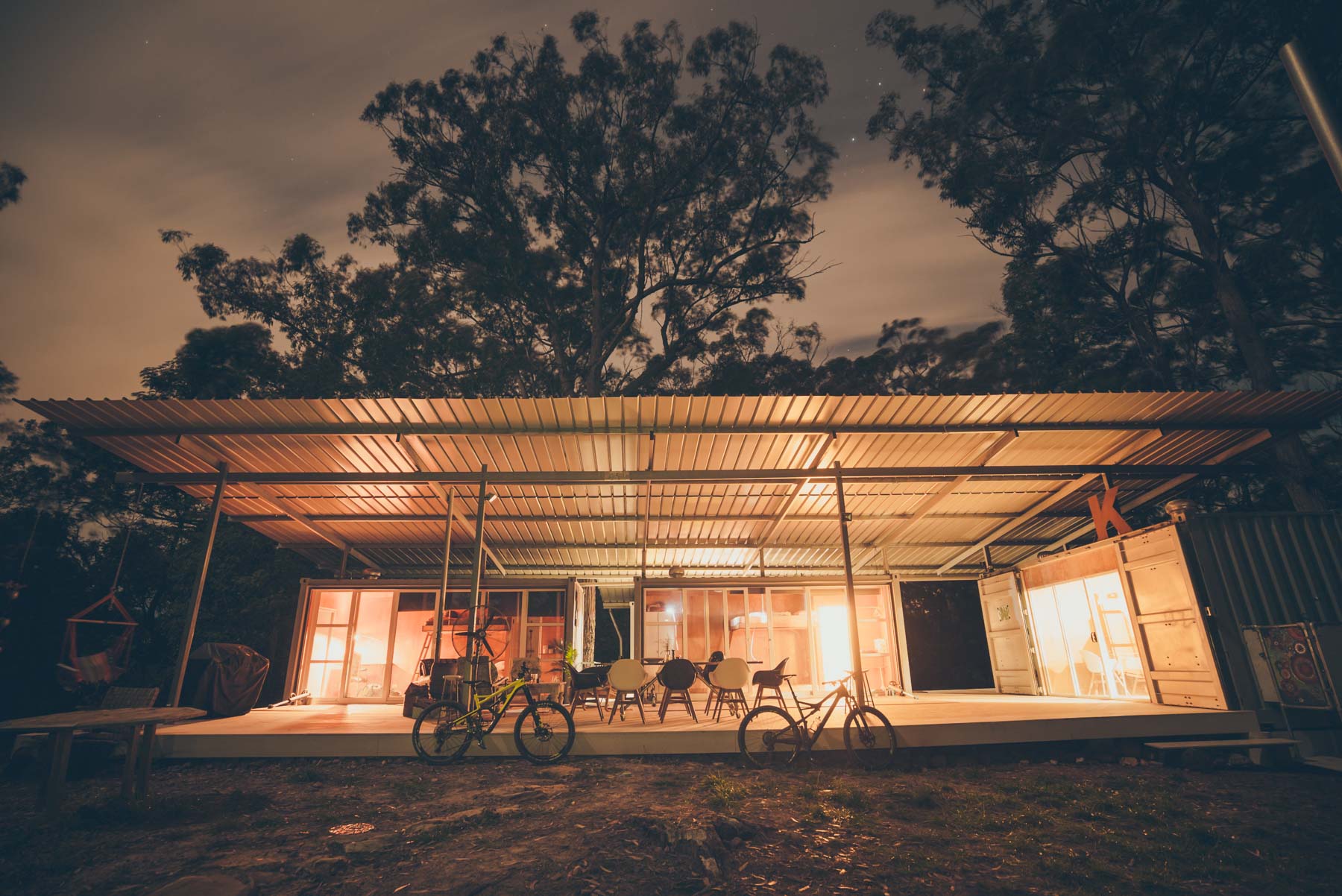 There’s accommodation for up to six people, with a communal kitchen, relaxed outdoor dining with a firepit and as you can see below, the trails literally start from the edge of the verandah. Peace and quiet, trails all to yourself, it’s the ideal place for a chilled out weekend away. Take a look for yourself right here, or book via Air BnB.

So would you call it an Enduro bike?

When you look at this bike’s figures on paper, particularly the huge 180mm of travel, it’s easy to assume it’s built with descending in mind. But this is the magic of the XQUARONE – it completely defies the standard categorisation we’ve come to use to pigeonhole bikes. In a nutshell, it does what other bikes say they’re going to do, but usually don’t.

We’d have no qualms using this one as our day-to-day trail bike, it’s mind blowingly capable as an all-rounder, which seems insane for such a big bike. This thing climbs very, very well. And we don’t put the caveat “for a bike with 180mm travel” on that statement either. The way this bike scoots up a hill puts many 100mm travel bikes to shame, and it does so without relying on any lockouts or travel adjustment, which simplifies the whole riding experience.

If you switch off that bit of your brain that tells you a climb is impossible, you’ll be surprised what this bike will get up.

Plus it has the added benefit of crazy levels of traction, thanks to the big tyres and the remarkable sensitivity of the suspension. In fact, we made it up climbs on this bike which we’ve fallen short of cresting on every other attempt. If you switch off that bit of your brain that tells you a climb is impossible, you’ll be surprised what this bike will get up.

Because the bike climbs so efficiently and accelerates so well, Polygon have been able to run some seriously meaty tyres without making the bike feel like a sloth. It’s a neat trick.

The geometry plays to the bike’s strengths too. It’s a little taller in the bottom bracket than other long-travel bikes, and not as slack up front either. This all conspires to help give the Polygon all-rounder appeal that you’d never expect.

Surely that big swingarm is flexy?

No, it’s very stiff actually. There’s a lot of carbon in there, and the slider hidden away inside the swingarm also serves to keep it tracking in a straight line. We didn’t notice any wiggle at all, and when you couple that chassis stiffness with the exceptionally stout FOX 36 up front, well you’ve got a bike that goes where you point it.

It doesn’t bunny hop around the trail like some other bikes, but then again, you can probably just hammer over that terrain which other bikes are forced to jump.

Hmmmm, kinda. Yes, you will find that this bike is not as ‘poppy’ as others, that’s part of its design intentions, to follow the terrain. But does that mean it’s not playful?

We think this bike’s playfulness takes a different shape, in that it encourages you to ride lines that weren’t on the radar before. We can attest to this – we tried and succeed in riding lines on this bike that we’ve never even spotted previously. So sure, it doesn’t bunny hop around the trail like some other bikes, but then again, you can probably just hammer over that terrain which other bikes are forced to jump. 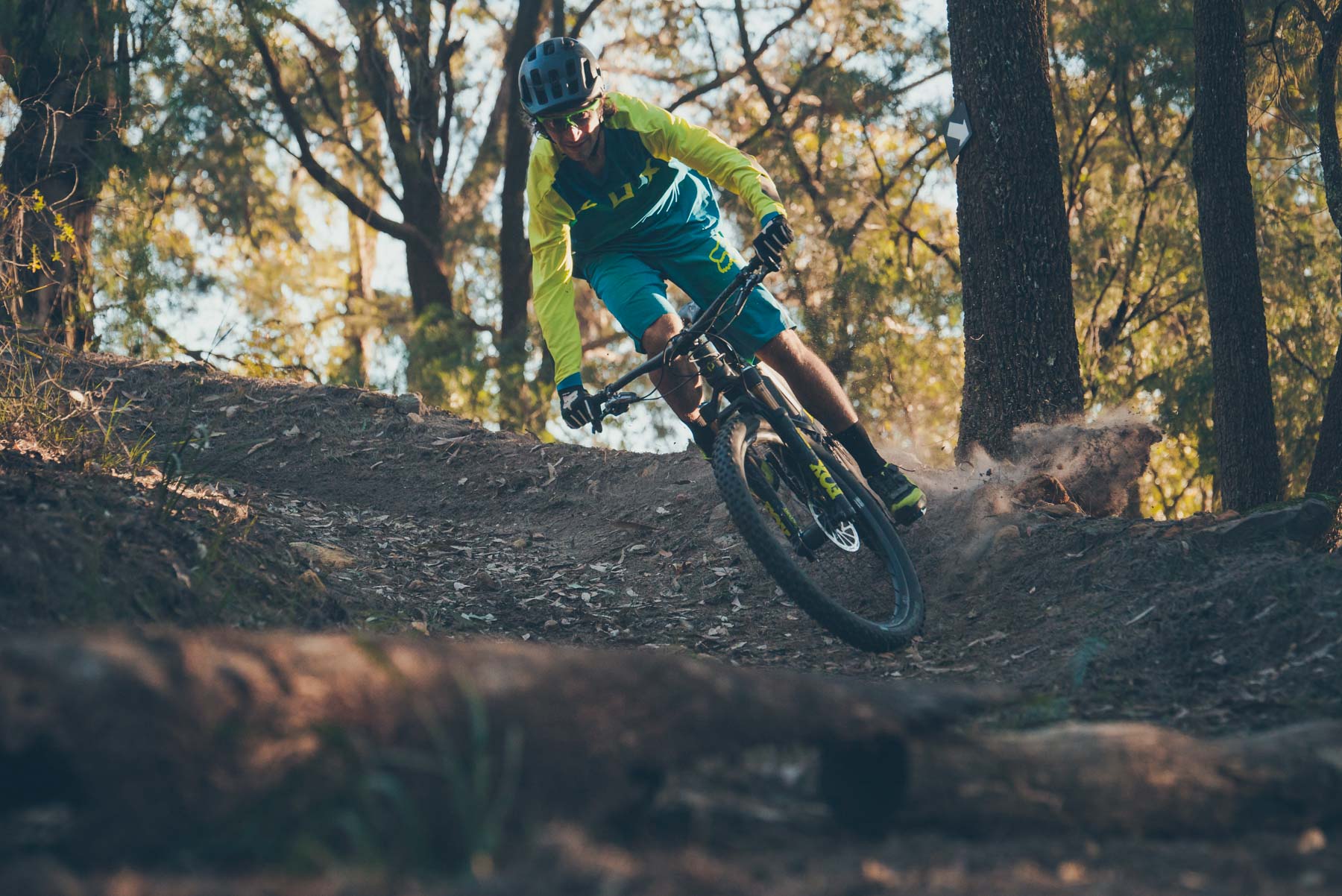 But it’s a Polygon.

And this is going to be the sticking point for a lot of potential customers. The market just isn’t accustomed to seeing a bike of this price point or this performance level from Polygon, a brand that’s traditionally been known for delivering value first. If this bike had a different name on it – Intense or Yeti perhaps – then we doubt there’d be any hesitation and the orders would be flowing in.

But put the name aside, and let’s be rational. Yes, at $10,499 the price point is very high, but there are absolutely no corners cut here – XX1 Eagle, e13 carbon wheels, RaceFace NEXT… it’s dripping with good stuff. There’s also a cheaper option in the EX8, which is $8499. Admittedly still a lot of coin, but when you stack the componentry alone up against other high-end offerings from Trek, Specialized, Santa Cruz and so on, it comes up looking like pretty good value. And that’s even before you even take the way the bike actually rides into account. 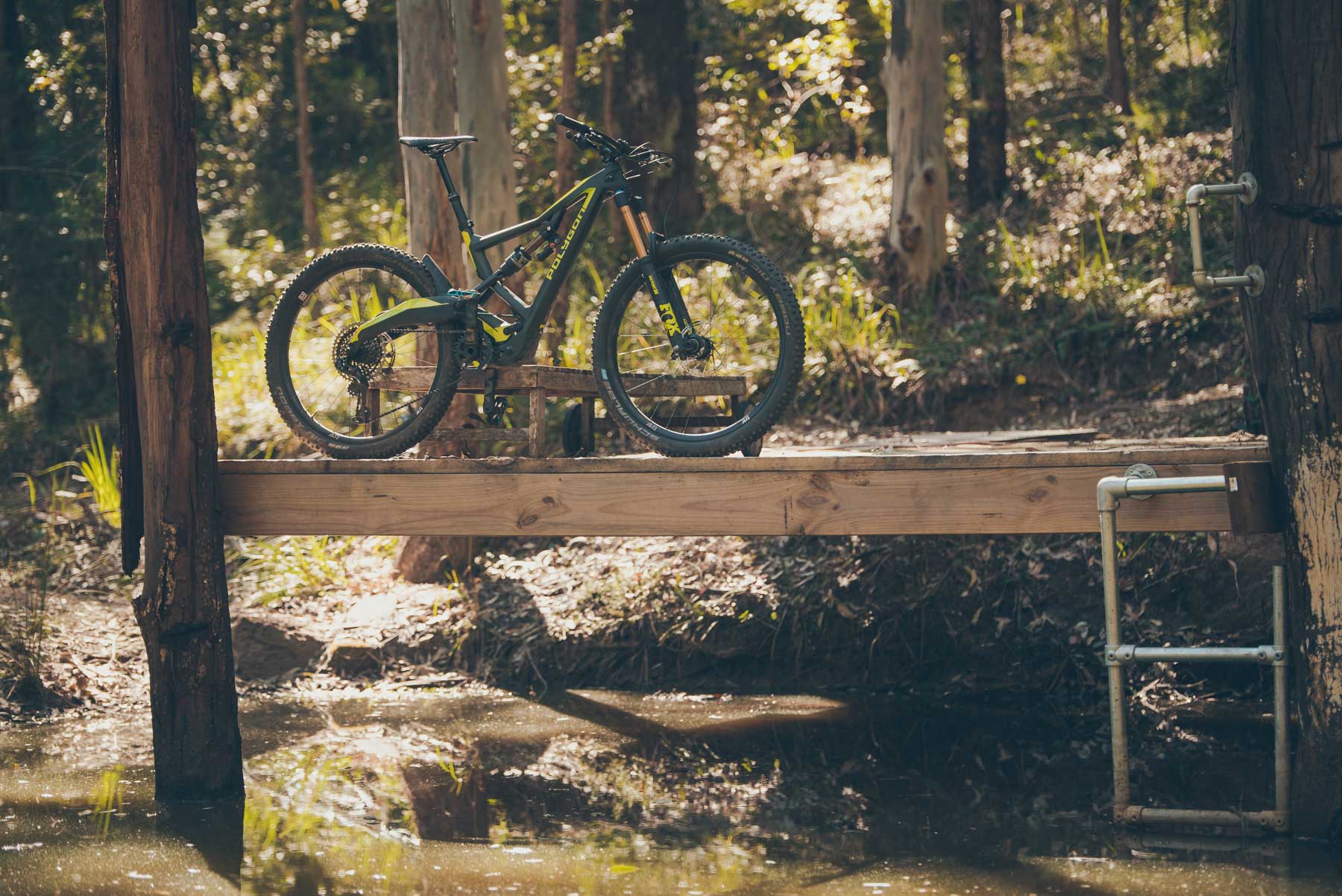 Ultimately, this bike represents a fundamental repositioning of Polygon in the market, both in terms of price and performance. How mountain bikers react is yet to be seen.

You sound very excited about this one.

Really? Yes, we’re unashamedly pumped on this bike. It’s come from nowhere, and it’s blown our minds. As we’ve said above, the way this bike works is incredibly hard to describe, both technically and experientially, so we’d 100% encourage you to try and get a ride on one to see what we’re on about. 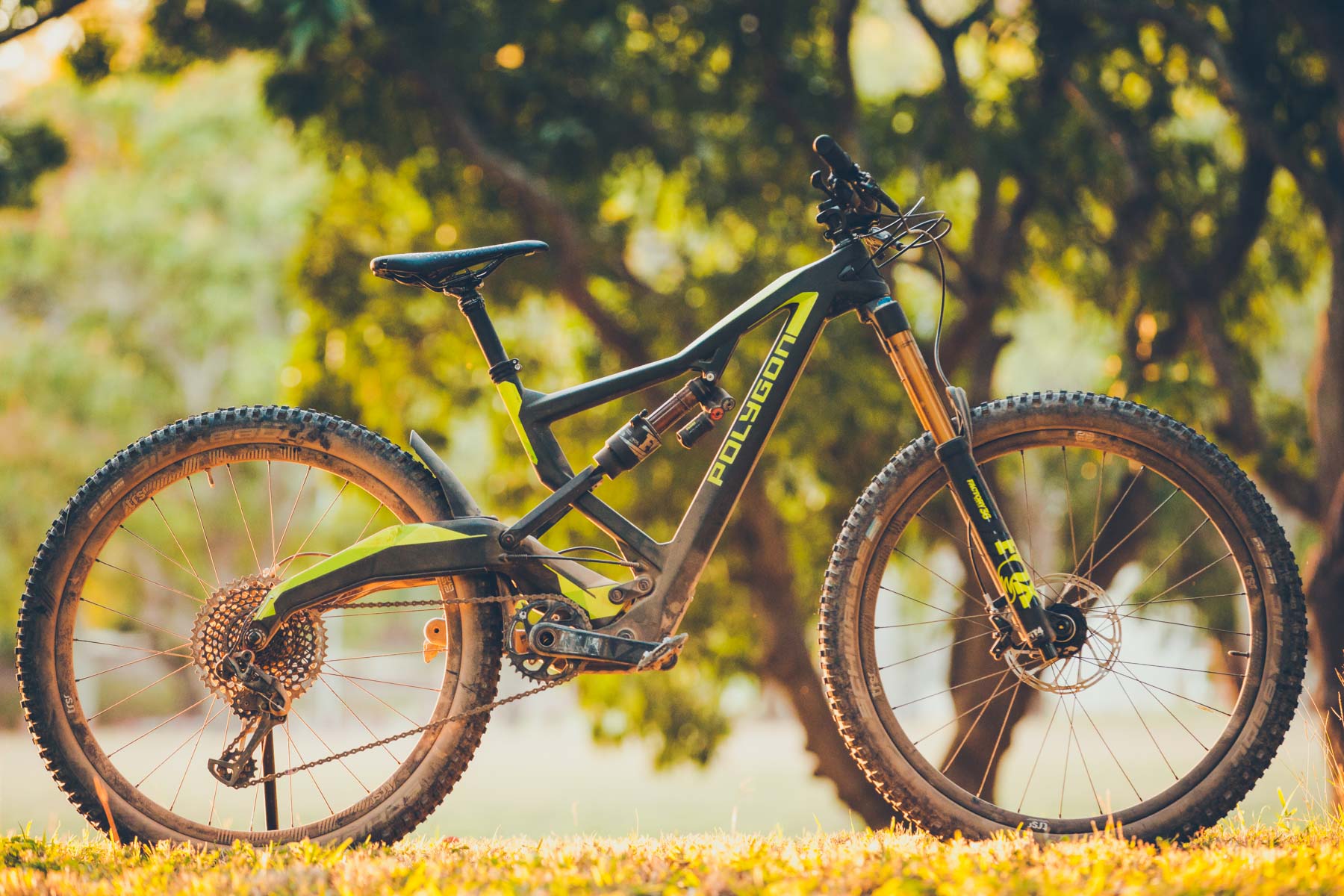