Adaptable to any terrain.
Twinloc suspension design helps the Genius transcend the barriers between lightweight trail bike and confident all mountain bike.
Subtle and understated finish.

The Scott Genius is one of the few bikes that for many years has successfully blurred the lines of the genres that define bike styles. Its versatility bends the rules, and manages to do what a true all mountain bike should – open up possibilities and options to the rider, begging for adventure. And it’s all thanks to one particular clever and well thought out element, the Twinloc. What is Twinloc and how can one feature it have such a positive impact on one bike?

Whilst the one reviewed here is a 2014 model, there is little change to the Genius for 2015, we previewed the 2015 range, check it out here.

The Genius is available in both wheel sizes, we test the 27.5″ version. 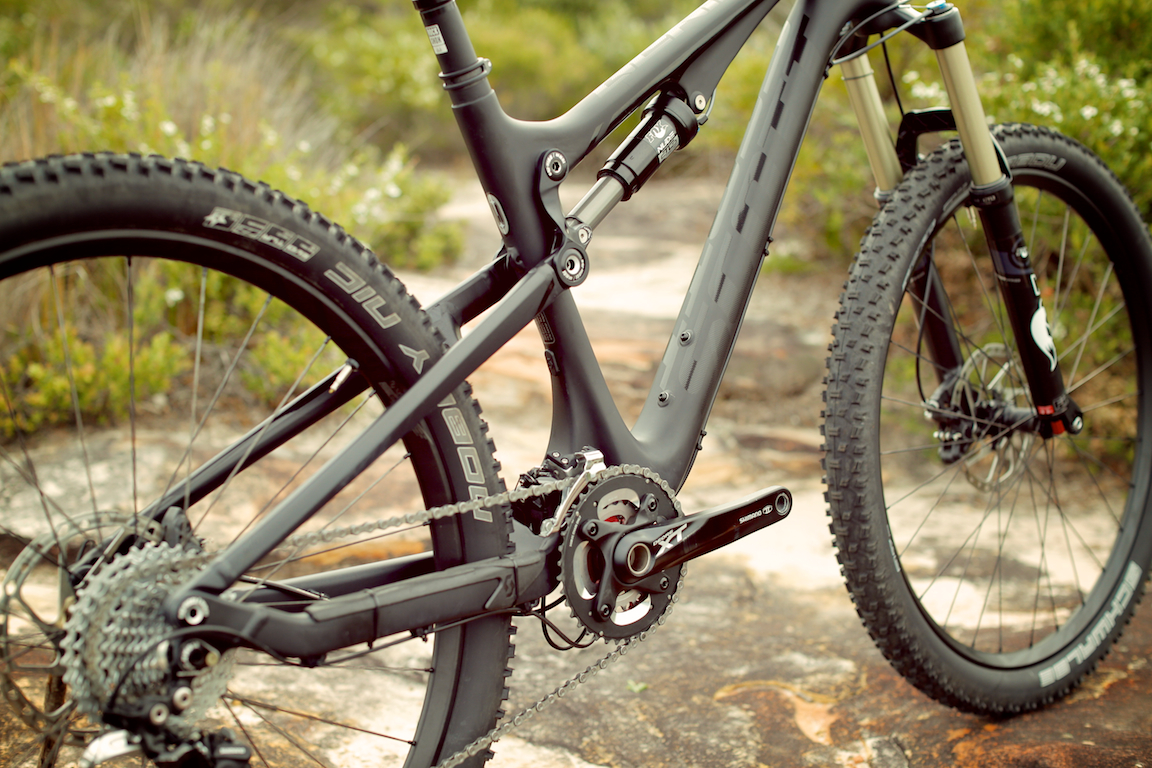 This is one seriously subtle and understated carbon bike, with the black on black finish, only very minimal glossy stickers separate the graphics from the matte black frame paint. From a distance the lack of graphics is both refreshing and stealthy. And in an age of brightly branded bikes, we welcome this murdered out stealth black ride.

A carbon mainframe is joined to an aluminium rear end, the cables are a mixture of internal and externally routed and included is a super neat rubber chain stay guard finishes off the impeccable frame.

At the heart of the Scott Genius (and integral to the shorter travel Scott Spark and longer Scott Genius LT) is a nifty handlebar mounted lever that controls the rear shock and fork, the Twinloc. It may just only be one of many features of this bike, but it impacts on multiple elements of the bike’s ride character via by changing both the suspension feel and geometry. Hitting the Twin-Loc lever on the bars engages Traction mode: the rear travel is reduced from 150mm to 100mm, stiffening the suspension rate and therefore the amount of suspension sag, to aid climbing. Push the lever to its second stop and the rear suspension is locked out entirely, along with the fork, making for a rock solid pedalling machine.

Yes, the Twinloc adds an extra two cables into the mix creating a very busy cockpit. Scott are also pretty experienced with this stuff, and they manage to keep any clutter to a minimum with clean routing, but with a little bit of time and care in the workshop you could trim the cables down in length, plus shortening the gear cables and brake lines a touch will lessen the birds nest of cables in front of the bars.

A bike with 150mm of travel is fantastic if the trails are on the rougher and steeper side of things, but it’s still a fair bit of bounce to be lugging up the climbs or through flatter trails. With the Twinloc it felt like we were riding two bikes in one. Heard that before? Well, try one out and you’ll see.

Not only does the Twinloc lessen the suspension travel quantity, it also sharpens the bikes important angles in favour of climbing when in Traction Mode. So the Genius will never feel like too much bike, it cleans up in the versatility stakes. You could ride the Genius hard on the rough trails and still enter the odd 24 hour or marathon race without any penalty from a non-efficient or heavy bike to battle with.

Shimano XT score the majority of the business with the Genius 710, and we’re totally fine with that. Although our test bike had a slight issue with the brake calliper leaking a tiny amount of mineral oil onto the pads, making for a noisy action for a few stops before coming good again, most definitely a warranty issue that can be sorted quickly by your local bike shop. A shame, as XT brakes are usually a benchmark for reliability and consistency.

A double chainring setup gives the Genius a real ‘all mountain’ conquering range of gears. Some riders may be rushing out to single-ring their bikes but if you ride all day in steep terrain a gear range as wide as this is a real blessing! It’s silent in its operation, and we didn’t experience any dropped chains at all. The trendy conversion to a single ring would clean up the bars with one less cable and shifter, but we appreciate the useable range too much to consider that, long live the low gear range! 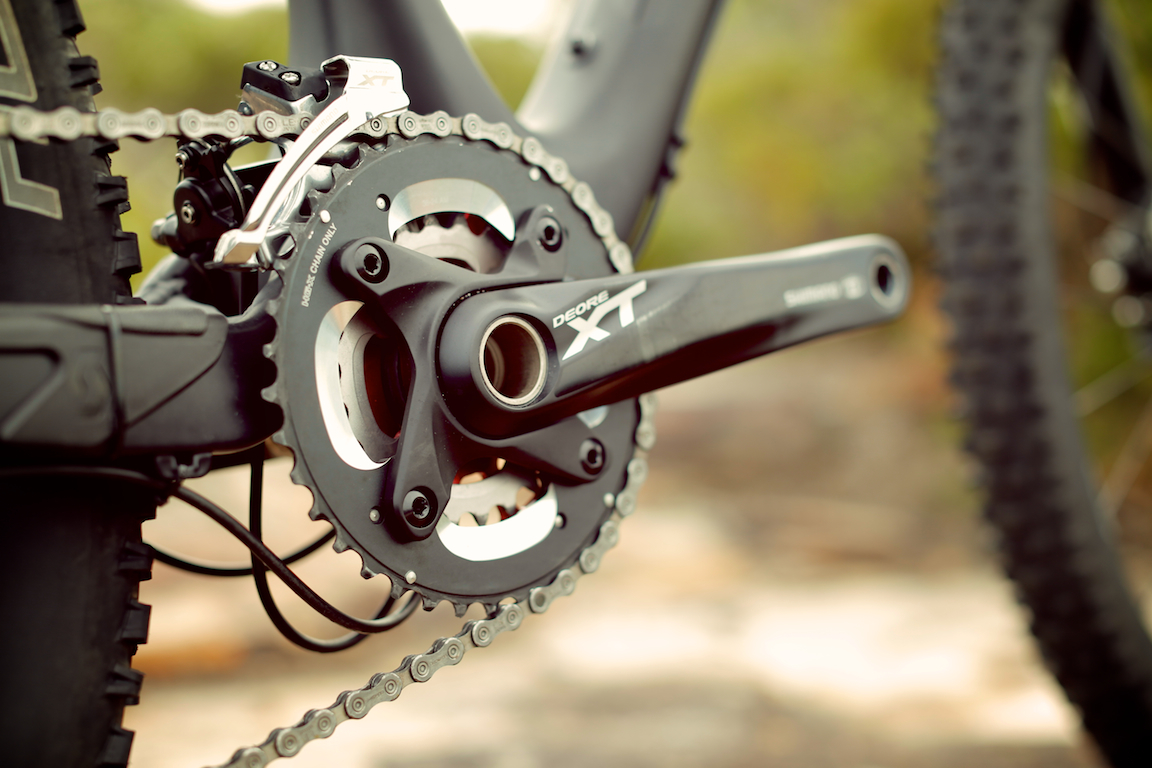 Syncros components have been around for yonks, but a couple years ago they were snapped up by Scott and are now their in-house component brand. The benefits of the bigger brands having in-house components is boundless, with the big players able to match colour, spec and intended use of each component to the bikes models easier and cheaper. In this case with Syncros already having such a great reputation for quality prior to the merger with Scott, the perceived quality matches our positive impressions after testing. Even the saddle was a fave for all testers. A short stem and wide bars were faves too.

The wheels use Syncros hubs and rims with bladed spokes. With such a capable all mountain bike, we’d prefer the rims to be wider as some of the new generation of wide rims are really impressing us with the way they boost the tyre’s traction and low pressure abilities. They are tubeless ready though, and come with tubeless valves for quick and easy conversion.

Schwalbe handle the rubber bits with the Nobby Nic in a tacky triple compound and tubeless ready casing. We’d swap them out for a tyre more suited to our hard packed trails, perhaps a Hans Dampf on the front at least, but if your soils are softer these tyres are lightning fast and light for their size. The 2015 Genius 710 comes with the new generation Nobby Nic on the front, which we’ve been much happier with in a variety of conditions in comparison the the ones we find here.

A RockShox Reverb adjustable seatpost with internal Stealth routing is always a welcome sight on any bike, aside from matching the paintwork like they were born together, its action is superb. Our had some leaking issues, with the hose adjoining the bottom of the post not quite tight enough, most probably our fault as we had to instal and bleed the post out of the box. Moments like these we miss external posts, or simply cable actuated ones.

FOX suspension front and back served up smooth and supple suspension as always, with the fork in particular being one of the smoother and progressive forks from the batch of 2014 forks from FOX.

Spinning to the trails on the tarmac with the Twinloc engaged, we roll along as if we’re riding a cross country hardtail with the fork and shock locked firm. Up and into the trails we engaged the traction mode which dropped the rear travel to a taut 100mm and also firmed up the compression setting in the fork. In traction mode we were able to stand up and crank ourselves up and over the pinch climbs without losing too much energy into the suspension, but still it was able to react to impacts helping maintain traction to the rear wheel, and avoid pinging our front wheel around. We like this! 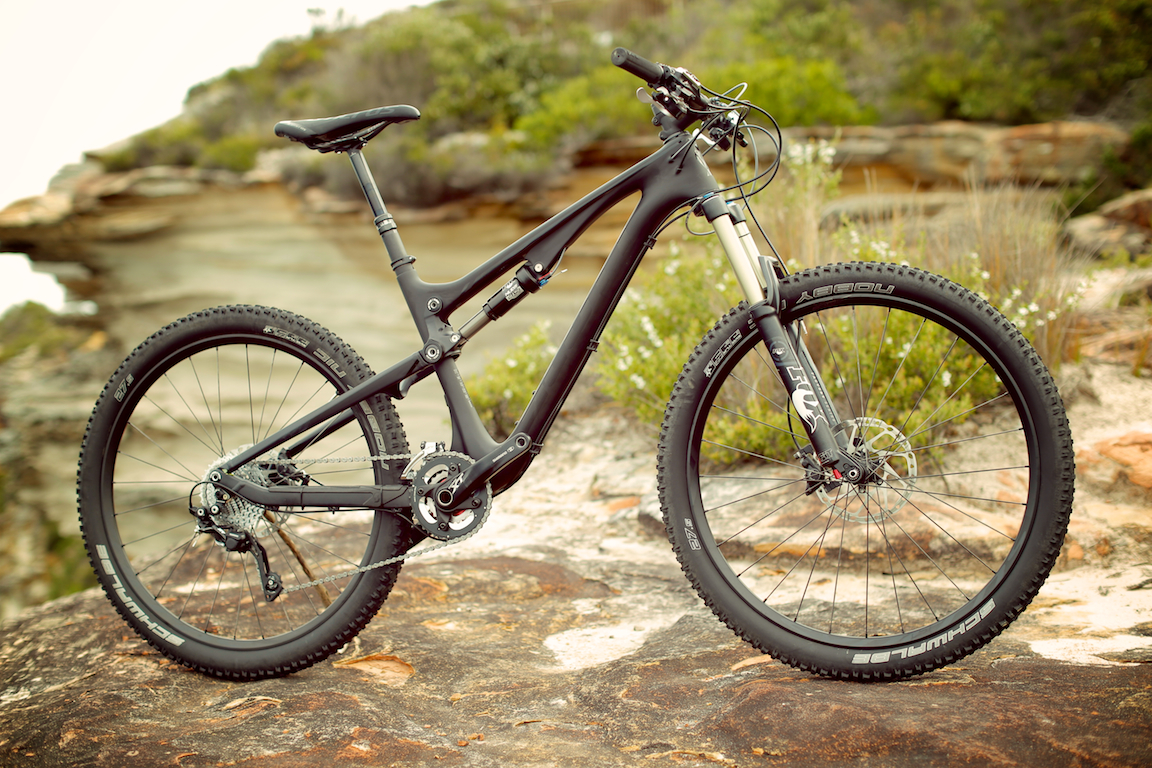 When the trails turn down, we release the Twinloc into open mode and let her rip, with the 150mm or FOX suspension taking more than just the sting out of the trails. Still with the Twinloc in full travel mode, the suspension feels firm under you, the trade off is when speeds get really high the rear end feels choppier and harsher than some of the other 150mm bikes that don’t climb as well as the Genius.

Geometry wise, the Genius uses a nice and roomy front end coupled with a short stem, giving the rider quick handling but plenty of room to move around when negotiating turns and wild terrain.

The Genius is a little different to the others in its category, it may have a generous 150mm of travel front and back but the whole bike rides so light and efficiently that we forget we were packing some serious firepower beneath us for when we needed it most. Riding more like a light trail bike with some backup saved up for the gnarlier descents, the Genius won’t be one for the rougher enduro race nuts out there, but will suit the rider seeking a classic trail bike with some added travel to get up and down any mountain you need to.

It’s a well named bike, that’s for sure. The clever suspension adjustment and a nice balance between a lightweight all day riding bike and big hitting all mountain bike is achieved in true style and class. The subtle graphics and stealth image hides it’s racey attitude. On either side of the Genius sit the leaner Spark and burlier Genius LT, we don’t doubt that one of these three bikes would please the most demanding rider.