Very nicely made.
Simple operation.
Enough output to be used as a sole light.

Quite heavy.
Helmet mount could be improved.

Why bring a knife to a knife fight when you can bring a gun instead? That seems to be the thinking behind the Serfas TSL-2500 light, which pumps out enough lumens to give you tan through your clothes.

With 2500 lumens blasting from atop our helmets, we felt totally comfortable tackling the rough trails around Flow HQ with just this light, rather than supplementing it with an additional handlebar-mounted light too. Because the four LED arrangement casts a broad spread, you’ve got plenty of peripheral vision, whilst still getting plenty of light down the trail as well.

It’ll keep this kind of performance up for almost two-hours at full power, which is more than long enough for us to stay out past when we’d normally be eating dessert and settling in to watch Q&A. Toggle it back to to one of the three lower settings and you can extend that burn time up to a missing-persons-report-inducing seven and a half hours. LED indicators on both the battery and light itself keep you informed about remaining charge. 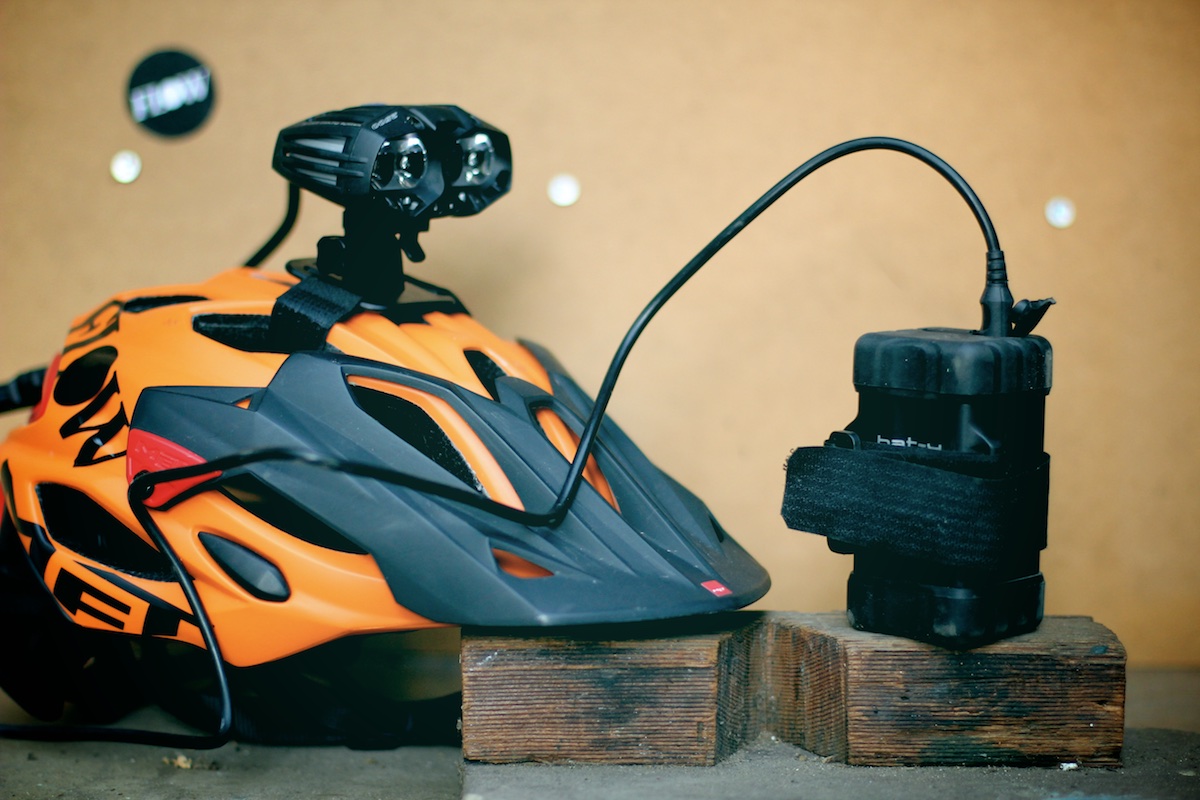 The downside all this output and longevity is the light’s size and weight. Weighing in at 550g, the TSL 2500 is a fair lump to carry around. The head unit comes in just over 180g, which is far from the heaviest out there, but when you consider that something like the Exposure Equinox weighs 50g less including a self-contained battery, the TSL 2500 feels pretty hefty. At 370g-ish, the battery is weighty enough that you’d probably want to pop it in a backpack, rather than a jersey pocket too. Securing the light to your helmet is a pretty basic mount, which uses just a single strap. We prefer mounts that have two separate straps, as they allow you to anchor the light with a wider stance for more stability. Room for improvement there. In contrast to our quibbles with the helmet mount, the weather sealing and quality of the cords and connections is great.

Call us luddites, but we kind of like that simplicity – charge it up, bolt in on, blind the shit out of a mate, no fuss.

Of course you could bar mount the light, where weight is less of an issue. If you do go down the bar-mount route, you’ll find the latch-style fastening is easy to use, the battery is rubberised in all the right spots so it won’t damage your bike, and a broad strap holds it in place. Commuters, who are most likely to mount it on the bars, will also like the fact you can plug a Serfas tail light into the same battery too, as well as charge USB powered devices (seriously!) like your phone, so you never have to stop playing Angry Birds.

Unlike some lights we’ve used recently (such as the Exposure Diablo and Toro) there’s no programmability with the Serfas. Call us luddites, but we kind of like that simplicity – charge it up, bolt it on, blind the shit out of a mate, no fuss. Serfas include a remote switch with the light, which you can mount on your bars within easy reach of your thumb. We never saw a need to use it as it just added faff to the setup and the only time we changed light output modes was on smooth climbs or tarmac anyhow, otherwise it was full power. Again, for commuters or people who are going to leave the light in place for winter, the remote is a good idea.

The light market is a crowded place now, full of dire, cheaply-made house fires in waiting, and the Serfas is obviously in a different league of quality to those cheapies. But that means it’s up against some stiff competition in the ‘serious’ light market. We’d like to see the helmet mount improved, and some weight shed from the battery ultimately, but if output, simplicity and obviously high-quality construction are your priorities in a light, then the Serfas TSL-2500 is a fine choice.