Riders wanting lighter, racier materials will have to wait.

In June this year we tested two popular women’s saddles from Specialized, the Jett and the Ariel Comp. In addition to reviewing the saddles themselves, we also looked at the comprehensive in store fitting processes and saddle test program that go hand in hand with the purchase of one of these products.

Our main criticism of the Jett was that we tended to get caught up on the wedge shaped cut out at the rear of the saddle when riding steep, technical terrain. We had to plug it with a saddle bag to stop baggy shorts and hydration pack straps getting wrapped around the back every now and then causing a few heart-in-mouth moments out on the trails.

One glance at the new Body Geometry Myth saddle and we were instantly excited. This saddle doesn’t look anything like other offerings from the big red S, indicating a fresh approach to design. And it’s filled in at the back. 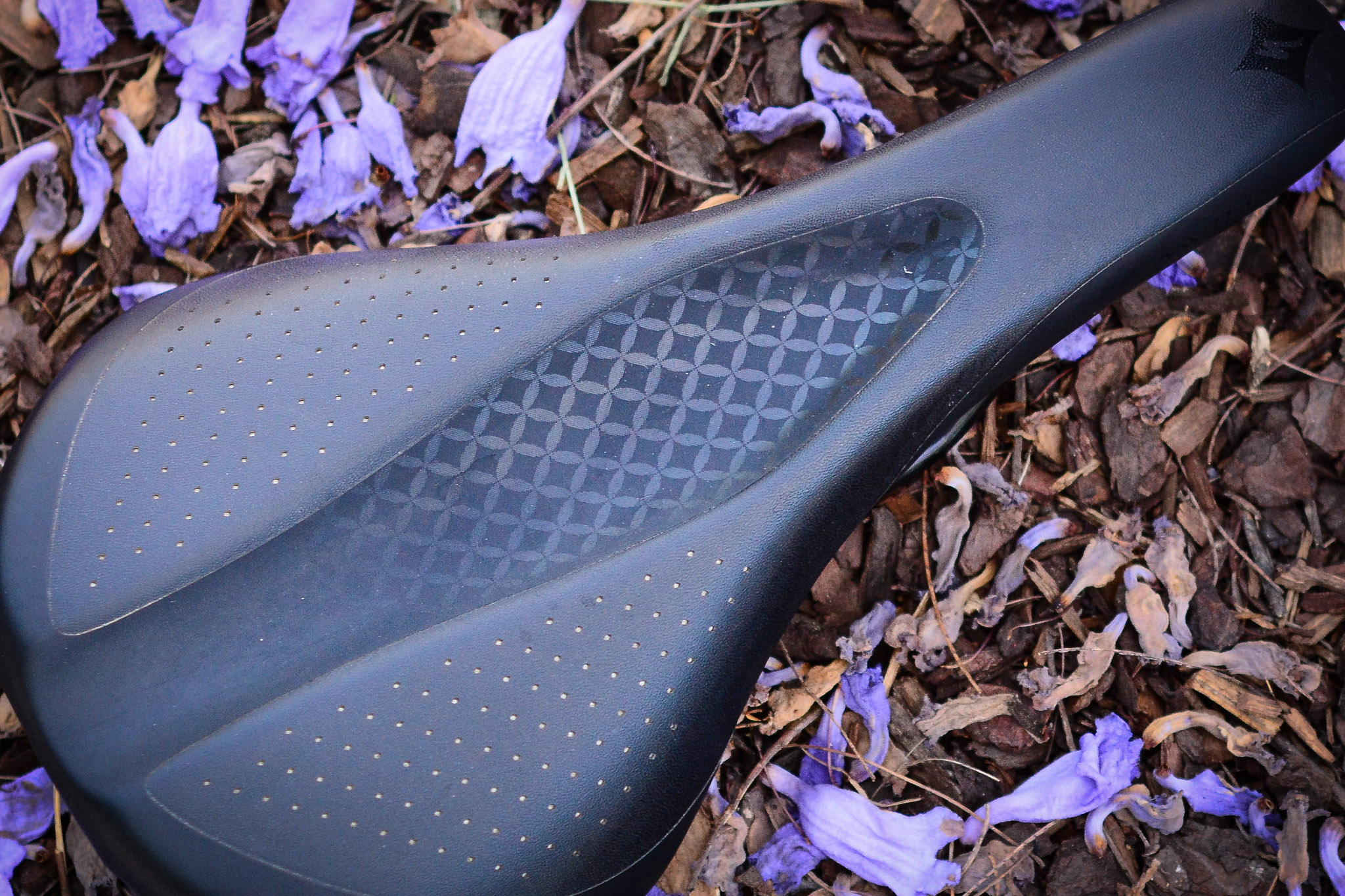 The first thing most riders will notice about the new design is that the cut out in the middle of the saddle has been replaced with a long, wide groove instead. It looks a little odd at first with the widest part of the groove sitting much further forward than we’re used to seeing in women’s saddles.

Listening to the backstory behind the new Myth when we met with the doctors behind the Body Geometry revolution, we learned that previous saddle designs have been accommodating the vagina around a best guess scenario. Yep, you read that right. Despite all the other research that goes into saddle design, no one had actually measured where the vagina sits in relation to the pelvic bones. It turns out its much further forward than people (men?) thought. Shocked and surprised? We were too.

Once we got over the disbelief that women’s hoo-has have been an afterthought in saddle designs we started to look at this new one a little more closely. Placing the foo-foo cut out further forward means ladies are more comfortably cradled (as opposed to squished) when they lean forward into a more aggressive riding position.

Taking the opportunity to jump on a pressure testing mat at the afore mentioned Specialized Doctor Day, we were surprised to see that no pressure registered in this modified area. In fact, you can get the set up completely out of the ball park, and the saddle will still feel pretty good: We mapped the Myth with the seat post too high, the reach to the bars too long, and wearing jeans rather than a chamois, and still failed to produce unwanted pressure in the midsection of the saddle. Instead, pressure showed up on the nose and sides as we compensated for set up by reaching further for the pedals and bars.

This means that while the Myth excels with a perfect bike set up, it also relieves pressure from the va-jay-jay when your bike set up is way off the mark. We also watched a bunch of blokes test this saddle, also in jeans, and they also failed to register any pressure in the midsection of this saddle.

Jumping back on the Jett we realised that when making the transition from an upright to a more aggressive riding position, we tend to shift our position a little further backwards on the saddle. This places our soft tissue in the wider part of the cut out where it’s more comfortable. This keeps the Jett comfy on the trails, but means if you set up your bike while seated in a more relaxed position, the position of your knees in relation to the pedals and the bottom bracket will shift when using the bike in the wild. 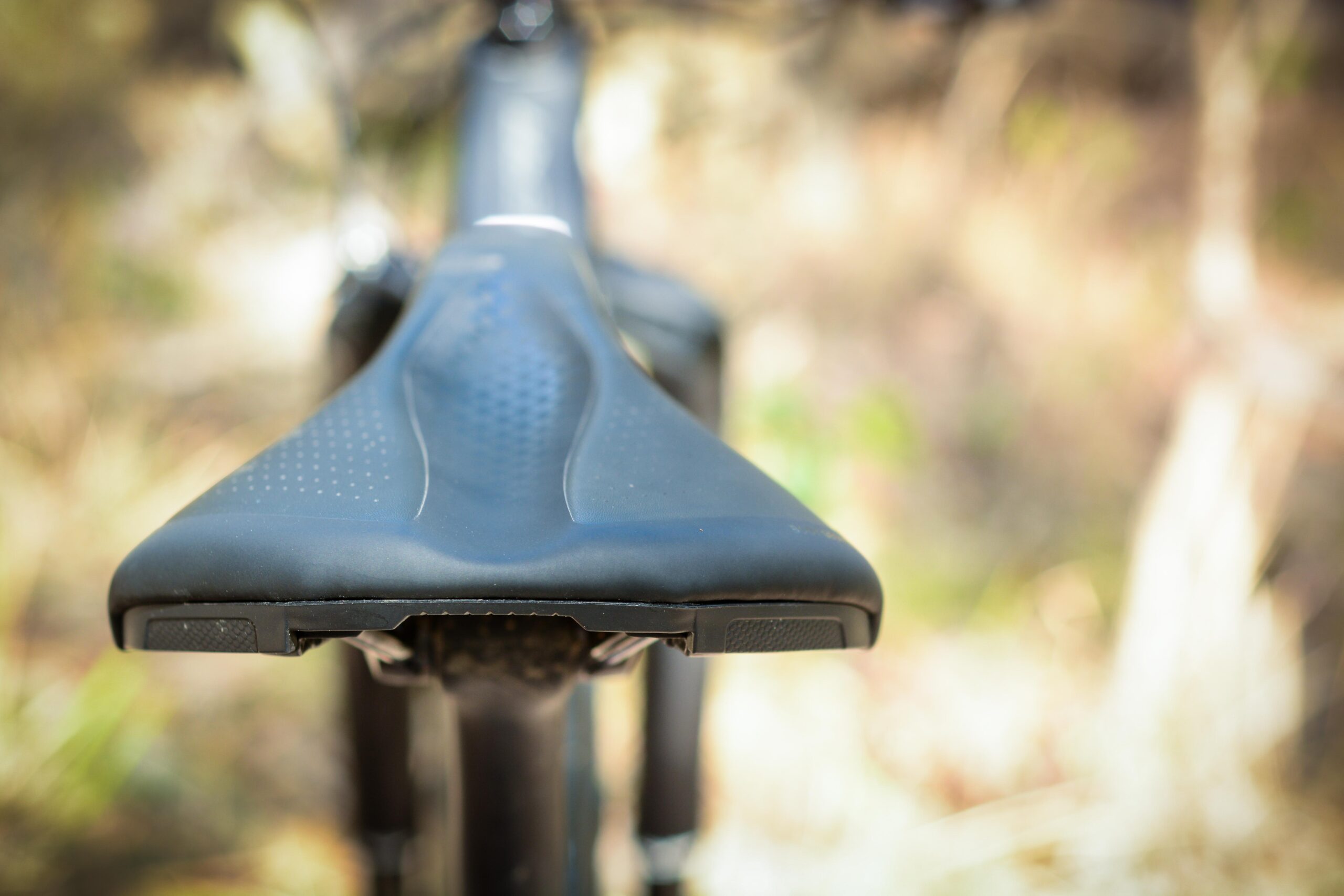 The Myth is much better suited for other body movements off-road too. The lower friction finish makes it easier to slip off the back when descending. The new design allows the rider to move around on the saddle and remain comfortable: toward the nose on steep climbs, a little further forward for more power, a little further back during longer rides or if you tweak an injury. Three widths (143mm is now the narrowest size on offer with 155mm and 168mm catering for wider sit bones) accommodate different sized pelvic areas too. 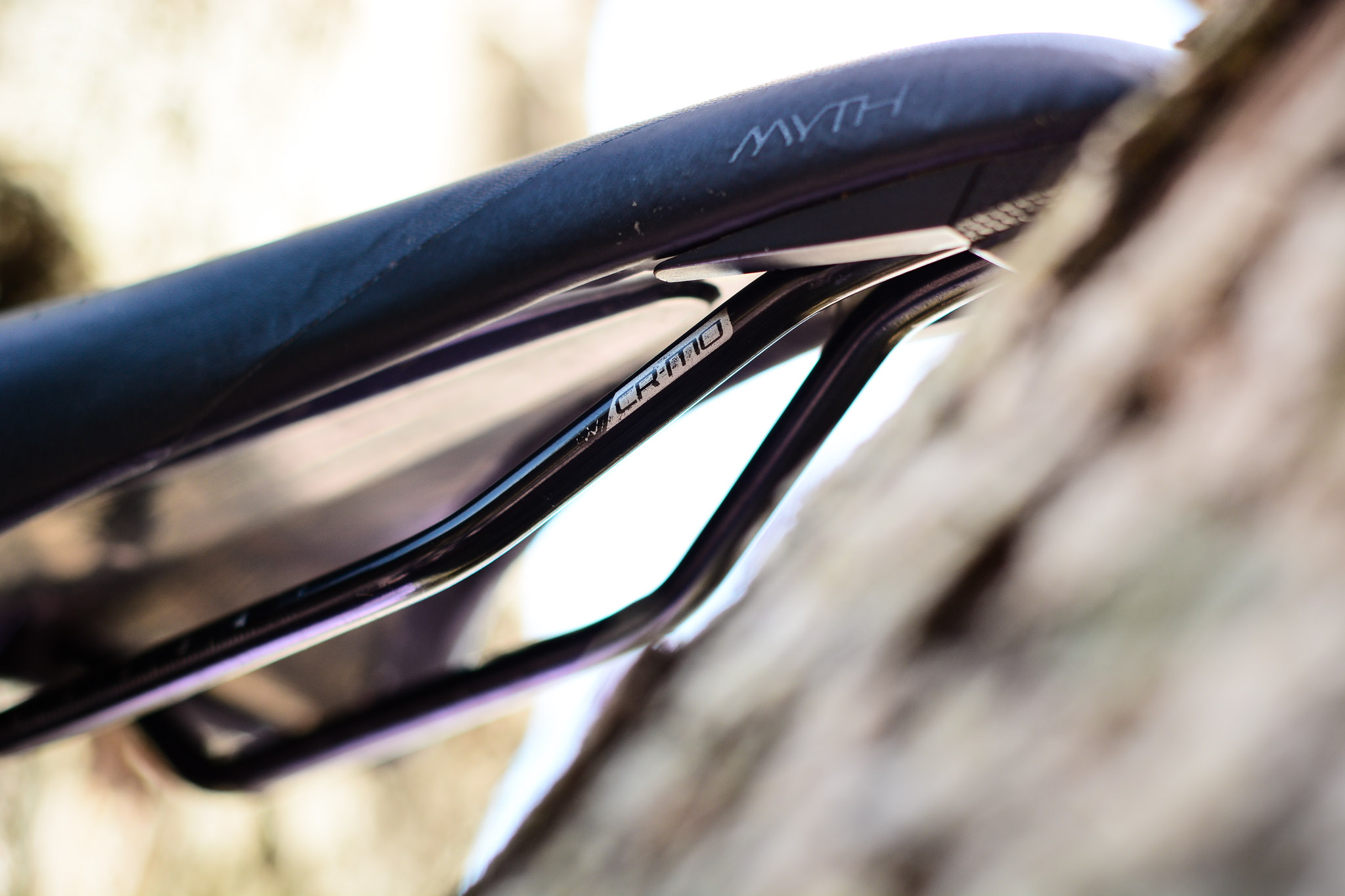 If we were to offer one gripe about the Myth it would be that we’re disappointed that it’s only available as an after market purchase at the comp level, with Cr-Mo rails. (A Ti railed version comes specced on the 2015 women’s S-Works level bikes . The soft padding was very comfortable on shorter rides but once we started using the Myth for rides of 3-5 hours, or multiple days in a row, we found our sit bones started to ache. While this reflects a personal preference for a denser level of padding, we’d expect the majority of its intended users to find the saddle more comfortable as is. In any case, the design principles underlying the development of the Myth will certainly influence a range of future women’s saddle designs from Specialized. We look forward to seeing some slightly firmer and racier options developed as a result.

The Myth represents a solid step forward for women’s saddle designs. It’s a welcome update to the Specialized range for technical trail riding and the versatile riding positions it supports makes it appropriate for a range of mountain biking disciplines. While detailed pressure tests and a medically informed design have led to its development, what we liked most is that, as a rider, you don’t need to know any of this stuff to experience its benefits.