Just plain fun. Bounces and rips about loose trails unlike anything else, because it's a bit weird.

Not for everyone, or all trail types.

It’s not a fat bike ok, it is a just a rigid 29er with huge tyres – not that unusual, right?

Actually, we won’t hide it, this bike is very unusual, but it’s a Surly and there is nothing you could call ‘usual’ in their entire catalogue. It actually looks like they know how to have more fun than any of us, with a bike that could cater for any tiny niche in the colourful world of cycling. Surly are also responsible for what we know as the original ‘mainstream’ fat bike – The Pugsley. But no, we’re not testing a Pugsley, don’t fret – we like to enjoy trails at speed and we aren’t that weird!

We’d have to admit, when we opened the box and out came this heavy, fat tyred bike we felt conned. In the photos on the Surly website, it looked more like a normal rigid hardtail 29er bike than it did in the flesh as we glared at it on our office floor with a look of disgust. There was a lot of, “you’re testing this one”, and a few “no, I’m not, you are” calls thrown around, but please don’t hate us for actually having a pretty bloody good – albeit short – time on this odd bike.

The Krampus has a pretty narrow window of intended use, it’s not going to do more than a few things really well, obviously. But we gave it a go, with curiosity, and found ourselves behaving very differently in the woods when the big tyres began to roll.

Fat bikes are 26″ wheeled creatures with mega wide rims and 4″ tyres. Just to settle the score here, the Krampus uses 29″ wheels, 50mm wide rims and 3″ tyres. Surly call it a 29er+. It’s built with less sand or snow grovelling or riding up stairs in mind, rather singletrack ripping with a twist of fun and a lot more bounce than your average rigid 29er.

Steel is real, and really adds to this bike’s burly and unstoppable character. The solid nature and thin tubing of the old-school frame material goes hand in hand with rigid bikes, the steel factor helps take the sting out of the trail vibrations. It’s not light though, at 14.52kg. Built from 4130 chromoly, with a classic style green, glittery paint it’s got a real retro look about it.

It’s a renovators dream, a real blank canvas you could say. Ok without sugar coating it, the parts are pretty basic but that’s not really what this is all about. What really matters in this situation are the tyres, rims and the things you hold on to, and in this case there is nothing better.

The brakes are mechanical from Avid, but at least they are the best mechanical ones out there. After they finally started to bed in, the power and modulation was ample to control the mega rotating mass.

Shimano SLX shifter and Shadow + derailleur get the job done, but the gear range is still fairly limited with the 1×10 speed drivetrain with the 34 tooth chainring up front. Perhaps a SRAM 11 speed setup could help widen the bike’s usability with a wider gear range.

Shimano Zee cranks is an odd spec choice, they are super tough and aimed at the budget conscious gravity rider, or a cheaper alternative to the downhill racing group set – Shimano Saint. At least you won’t be able to break them, but they sure would be contributing to the bike’s beef. A simple MRP chain guide keeps the chain on the ring safely, and it worked ok for us. Just a couple times the chain would jump off the bottom of the ring, but the guide held it on top so when the pedalling began, it would correct itself and all would be fine again.

We wanted to take the Krampus somewhere that the mega tyres would actually be a benefit, we needed deep gravel, steep rocks, sand and some fast fire roads. We had to think hard. The moon would have been a good place, but that wasn’t an option on a Tuesday morning.

The big rubber takes a lot more effort to get rolling, but with the large rotating mass, speed was maintained in a weird way. The long feeling wheelbase makes for some seriously stable riding, and the bigger rotating mass makes the bike feel heavy to turn, but after a little while we began to get into it. Throwing our weight around on the bike and using a healthy dose of body language we found ourselves hooting along and using way less brakes through corners than we usually would. The lack of braking through corners became one of the funnest elements of this unique ride, we found the commitment of our new steel beast a real hoot.

You do bounce around a lot, like an old Toyota van with blown shocks. If you hit one depression or rise in the trail surface, you often begin to oscillate a bit, you just need to keep it all under check or you’ll go bounding off into the shrubs. This feeling is a lot more apparent with the 26″ fat bikes out there, but aboard the Krampus we found ourselves a passenger at times but it wasn’t such an issue and unless the trail turned into a drop or jump we could bounce our way to safety.

A pea gravel climb which usually takes great focus and careful line choice became a laughable affair, as we would just hop out of the saddle and spin our way up the loose surface with the big arse tyres conforming and sticking to the loose surfaces like magic.

Rougher and faster singletrack was not a real highlight, to be expected. Just imagine that time when you first rode a 29er, the old ones that were cumbersome but super stable. It’s like that, but with no suspension, just cushioning bounce that takes a bit of a knack to keep under control.

Despite its girth, the Krampus holds speed over rough surfaces really well, as the tyres don’t deflect from small rocks or roots like we’re used to on regular bikes. It’s also quite smooth rolling along, that is until you hit something bigger than a shoe, then you’d better be paying attention.

The Krampus blurs the line between fat biking and 29er riding, it’s quite trail friendly and surprisingly agile in the right environment, you just need to find that happy place for the Krampus. It’ll tame those trails where traction problems would usually stop you in your tracks, and seems to remove that competitive ‘must go fast always, all the time’ attitude from our minds. It’s just good fun, and a real change.

We liked it more than we expected, mainly because we wanted to see the best in it, but at the end of the day, we’re lucky there are other bikes to ride, conventional ones, with suspension and frames of carbon. 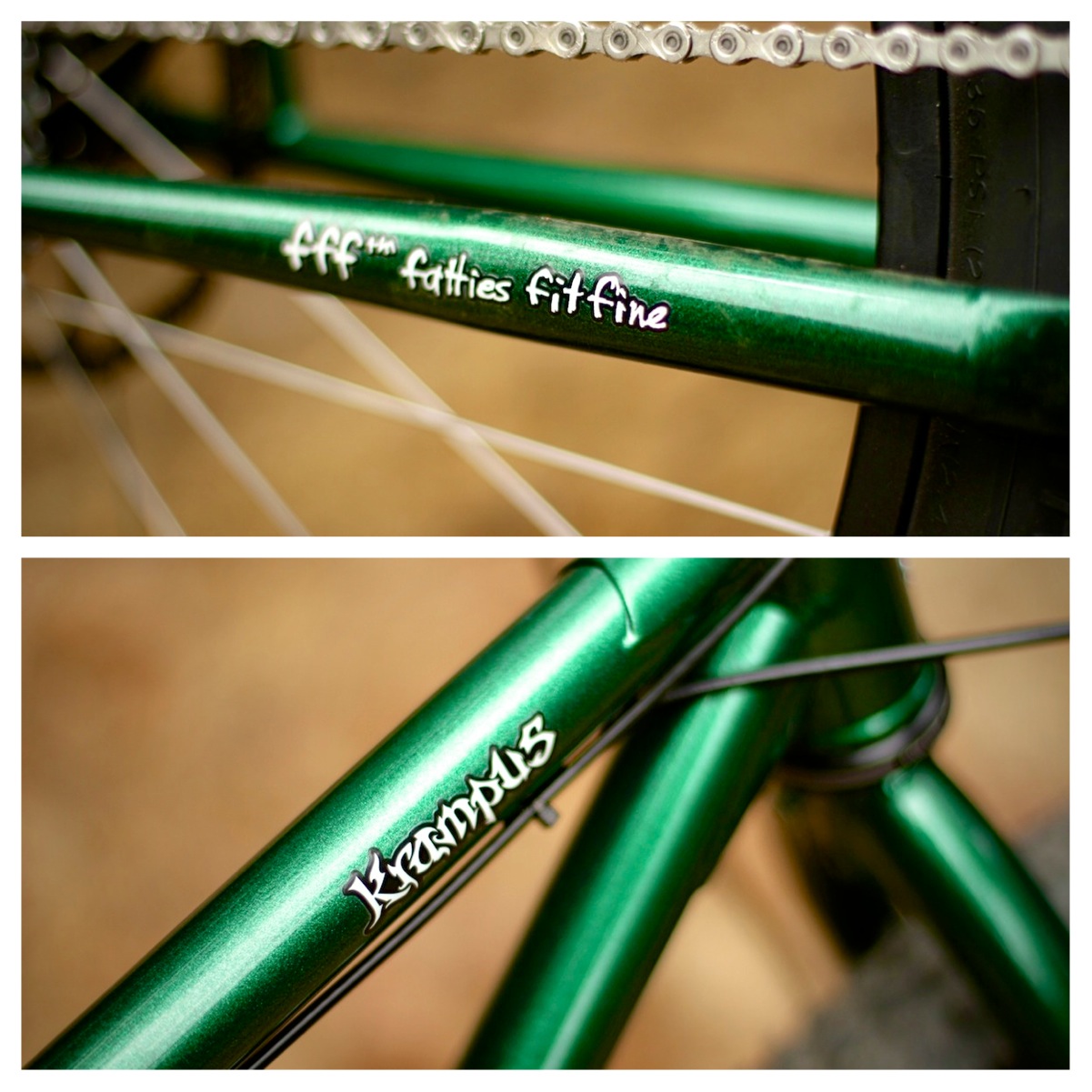 Krampus is the evolution of the 29er. It’s not a fat bike. True, its got 3” tires on 50mm rims (we call this combination “29+”). But where fat bikes are really designed for slowspeed crawling, Krampus’s frame (geometry, tubing diameter/thickness) has been designed with a long toptube and as short a rear end as we could get away with given the wheel/tire size. This, when combined with the big, wide tires, results in a mad amount of rolling inertia and grip.

It rips and responds well to body English. The big tires also offer a bit of suspension-like cushion. Krampus is a trail bike that also tackles all kinds of terrain. Krampus lives somewhere between bushwhacking, speed racing, and back lot dirt track riding, and all this makes it just plain fun to ride.

Krmapus’s hub spacing is standard 100mm front and 135mm rear, with rear-loading horizontal dropouts that accommodate a derailleur and single ring/cog drivetrains. It’s got clearance for disc rotors up to 185mm and is designed to run a high direct mount standard front derailleur. This type of derailleur will allow the most clearance at the tire. Even though there is no need for the sort of frame offset you find on our Pugsley and Moonlander models, chain and derailleur clearance at the tire remains a serious consideration.

If you plan to use standard width rims and tires, you’ll be able to run a normal mountain triple crank. However, if you go with our 50mm Rabbit Hole rims and 3˝ Knard tires (and why wouldn’t you?) then plan to use a 1x or 2x crank…a triple simply won’t clear the tire. For best chain/tire clearance, we recommend either a Surly O.D. 2x crank or a 1x system. Other brands’ 2x cranks will work but may cause some chain-on-tire rub in the easiest gear combo.