Ah, Yeti... Why have we had so many highs and lows? The news of the SB100 made us so excited - we desperately wanted to ride it - and sure enough, we loved it. But it spent way too much time in the work stand, not on the trails. Read our ten-month tale of love and heartbreak here.

The bike we wished for.
Lively and confident.
Singletrack speed.
Looks as good as a Yeti.

Those who have ridden a lightweight 100mm travel 29er will know what we’re talking about when we say there’s nothing quite like it. Aside from efficiency from the small amount of travel, the connection between the rider and the trail is so close, you feel entirely engaged, and every piece of effort you put in is rewarded with speed. But bloody hell they can also be harder to hold onto than a fish out of water when the trails get nasty.

We’ve witnessed the emergence of a new dual suspension bike category, affectionately known as hardcore XC or down country. This category took the elements that made a short travel XC bike feel so alive, and tweaked a few vital areas to make it ride like a trail bike, with more confidence. We’ve ridden a few of these bikes lately – the Yeti SB100, Specialized Epic Ev and Intense Sniper to name a few. We expect this category to grow as the quality of suspension advances, so the need for longer travel can subside. 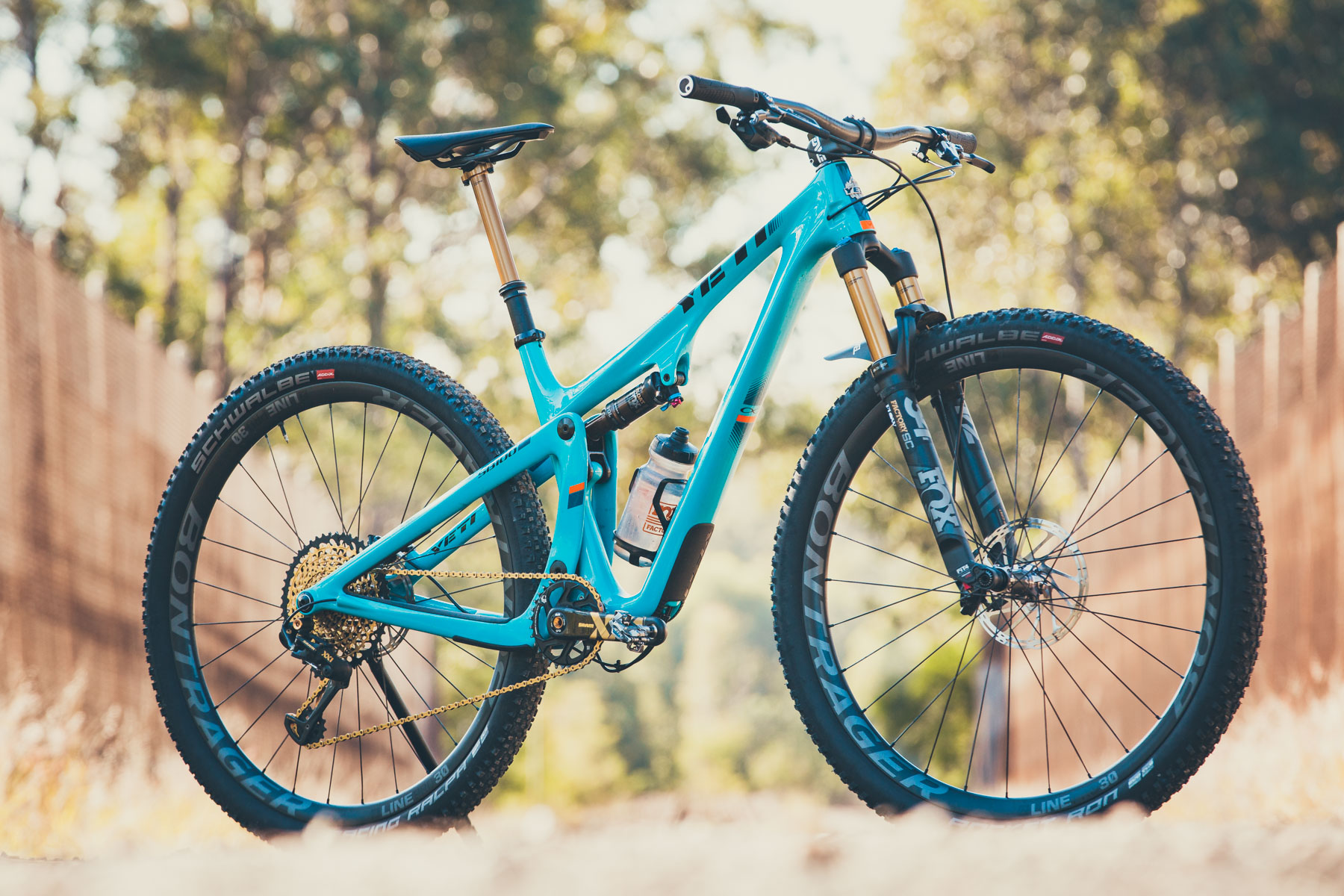 While getting any 100mm travel 29er race bike and retro-fitting a short stem, dropper post and longer travel forks could do the trick, you’ll end up with a few compromises. The Yeti SB100 was not a compromise – it was built for the new school, it resonated with us so well, all the numbers looked great, the choice of parts spec had our attention. We dived in an nabbed one for review.

What sets it apart from a traditional 100mm XC bike?

The wheel diameter and rear-suspension travel are where the similarities between the SB100 and a traditional XC race bike stop. Let’s use a giant Anthem or Specialized Epic, for example: their long, low sharp and light feel is what you want for racing around a multi-lap circuit where you know what’s coming up, the climbs are tough, and it’s all business and no time for much else.

The SB100 lays it back a little, the combination of a slacker steering angle, 41mm offset fork crown, short stem and a 120mm travel fork allowed us to put a lot of confidence in the front end, and let it rip.

It’s not that light. There’s more beef in the frame, especially in the front end, so it would be an expensive exercise to build up an SB100 to a weigh close to an off-the-floor XC race bike.

First rides, a baptism of fire, and a four-day race.

The SB100 was assembled only days before the Port to Port MTB race, a four-day stage race around the Hunter Valley and Newcastle. Why did we choose this bike for the race? Head over here for our decision process.

Before the race, we wanted to bed the bike in, iron out any initial assembly issues if they arose, get comfortable with the suspension setup, saddle position and cockpit. We were pretty excited, to say the least. Into the trails, and this bike flies! Hunting through singletrack we were holding terrific speed, requiring a lot less pedal power out of the corners than a heavier trail bike, but it cornered just as fast and wasn’t afraid of staying off the brakes on fast and rough descents.

The SB100’s handling is its most excellent trait in our minds, the front end of the bike feels so robust, and the suspension so composed when pushed hard, we enjoyed taking it out to trails where we’d typically opt for a longer travel bike, and really loved the feeling of being on the edge .

Where did it all go wrong for us?

On the first day of the race, the bike began to creak. Not the type of creak that we’d expect to come out of a week-old bike, that’s for sure. It occurred when we pedalled out of the saddle and rocked the bike side-to-side. After tracing it to the Switch area, we pulled the rear end off, cleaned it, and rebuilt it with the suggested torque settings and grease applications. It was quiet for a short while, but it eventually the creak returned on the second day of the race.

Long story short, we were eventually informed by Australian distributors – Rowney Sports – that there was a known issue with the hardware holding the Switch unit in the frame, and a revision was coming our way to solving it.

The first revision… and a second.

We fully recognise our experience with the SB100 might be entirely different from that of other riders. Our bike came to us from the first shipment to land in Australia, and we believe that from July-ish 2018 onwards, new frames were shipping with the revised linkage that was successful in solving the creaking issue, but this is our story to tell, recounting our honest experiences.

So, we fitted the first revised Switch assembly. The new one didn’t look too different to the original to be honest, just with a section machined section out of the spacers to add clearance, but there was no rubbing in the first place. It didn’t fix anything. The creaking returned. Facepalm.

The second and final revised Switch assembly came to us in the mail after the race. This is the version that’s currently fitted to new SB100 bikes sold. Claiming to be lighter, more elegant (and hopefully quieter), the way the whole sliding system fastens into the frame is entirely different. Instead of two chunky pins running horizontally through both ends of the Switch sliders, the assembly is fixed to the frame with four female bolts. We were hopeful, even if did look a lot more flimsy than the original setup. 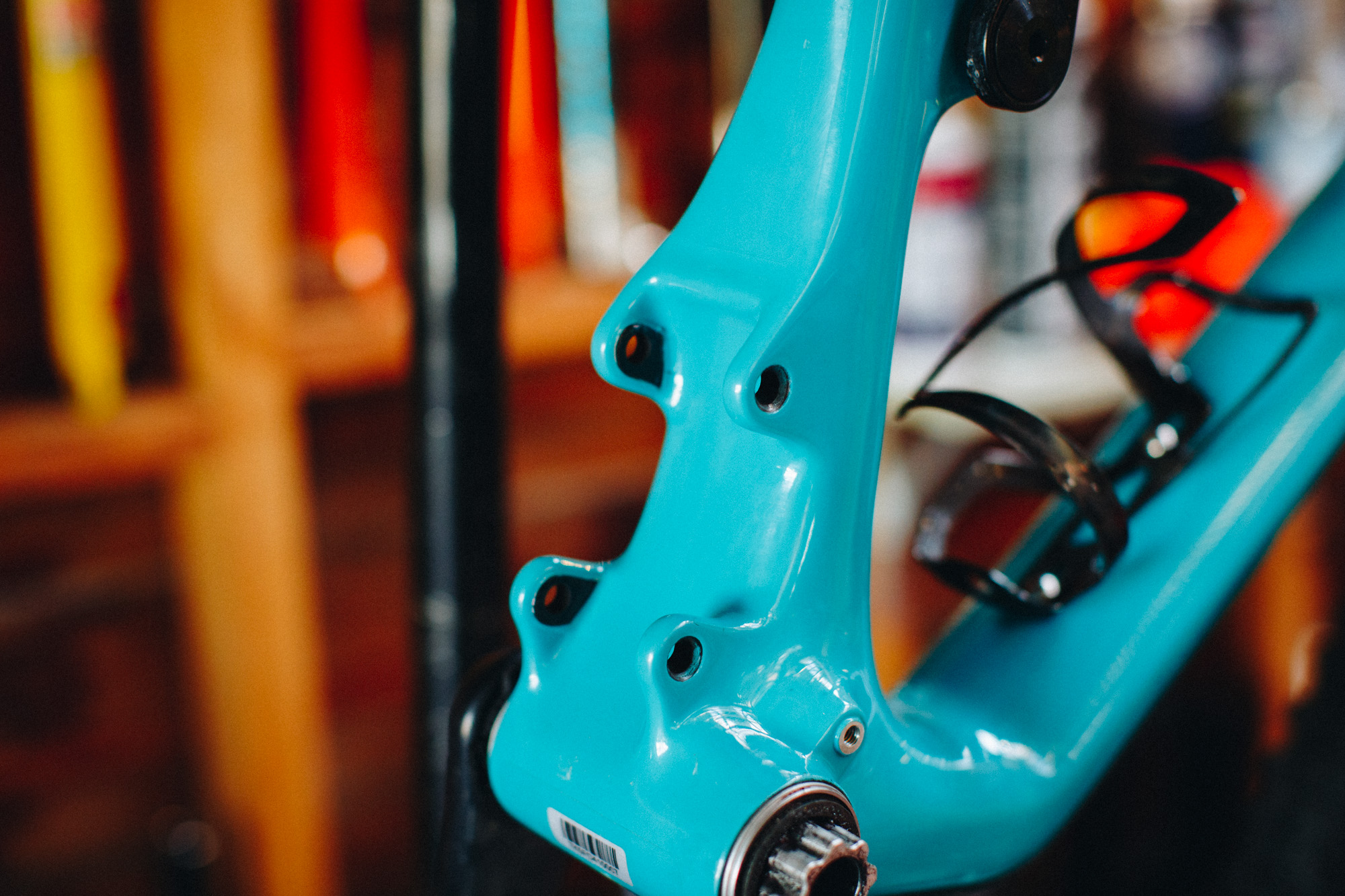 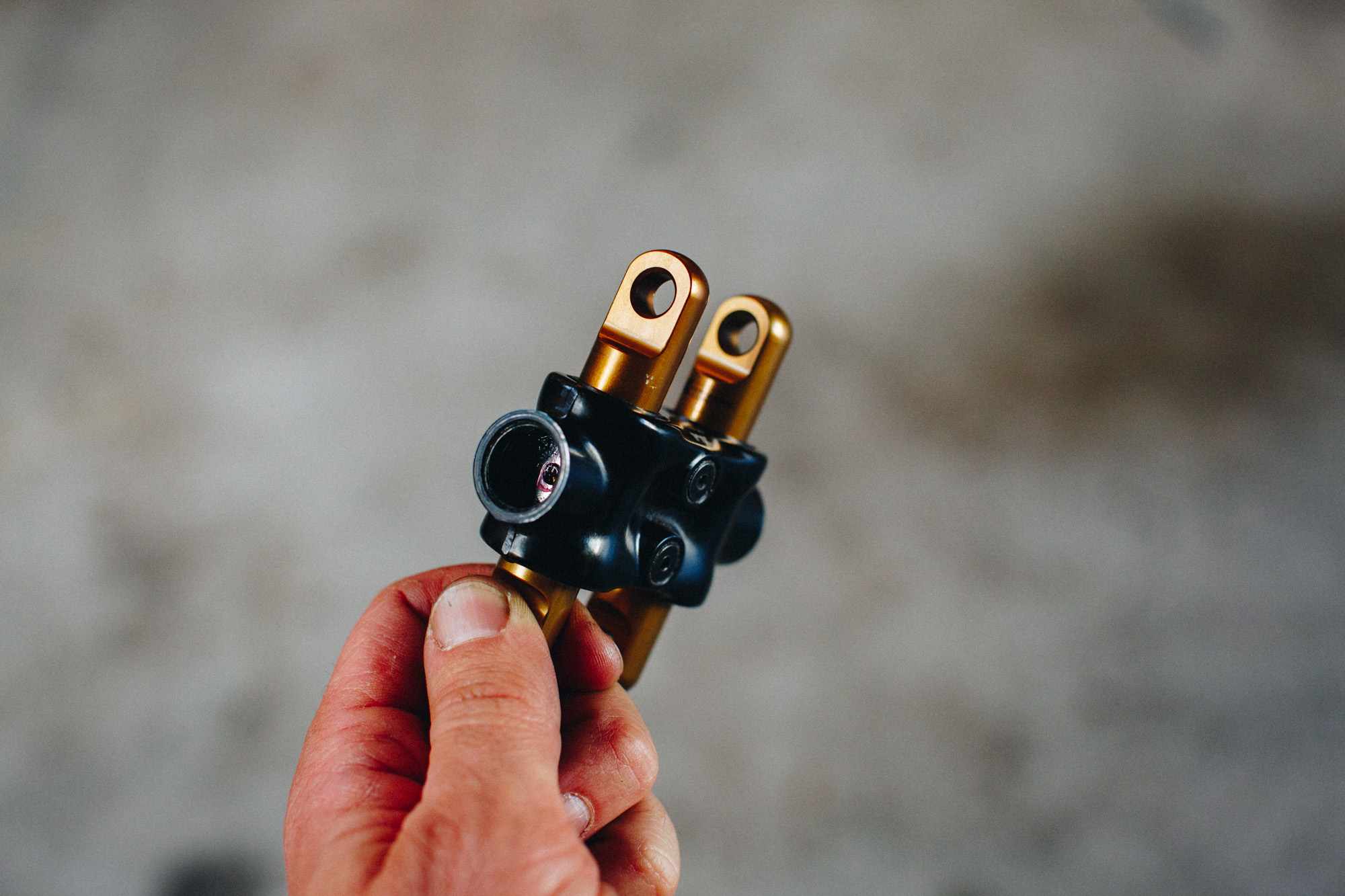 Hey, presto! The revision worked, and there was no more noise even after a few rides. But, and this is a big but, in its place was an unacceptable amount of play in the Switch bushings. The frame stiffness that we’d loved so much was greatly reduced with the new system and the bike’s lateral rigidity was just not up to scratch. By rocking the rear wheel side-to-side, the front and rear of the bike were visibly wobbling in different directions. Simply sitting on the bike with the rear brake locked and pushing down on the pedals would give a similar result.

It didn’t look right, so back to Yeti we went, and they swiftly returned our query with instructions on how to preload the switch to help reduce the play. Hmmmm….

What we didn’t know, and is not written into the online service manual, is that the preload on the Switch assembly’s bushes can be adjusted. Via four small allen keys, the Switch bushing can be loaded, creating a tighter fit around the two little Kashima coated Switch sliders.

Preloading the Switch reduced the majority of the play, though it increased the binding friction on the sliders significantly. With careful incremental adjustments, we settled on a preload tension that was tight enough to limit play, yet still allowed free movement. It’s a slightly fiddly procedure, and certainly an easy one for home mechanics to stuff up.

Yes, the revision put an end to creaking, but in its place is an increase in flex from the Switch mounts. The original Switch system that the frame was supplied with was much stiffer, in our opinion.

The four female and male bolt system seem to us like an odd solution to the problem; the four bolts clamping to a relatively small area of carbon bear a lot of the load when riding. 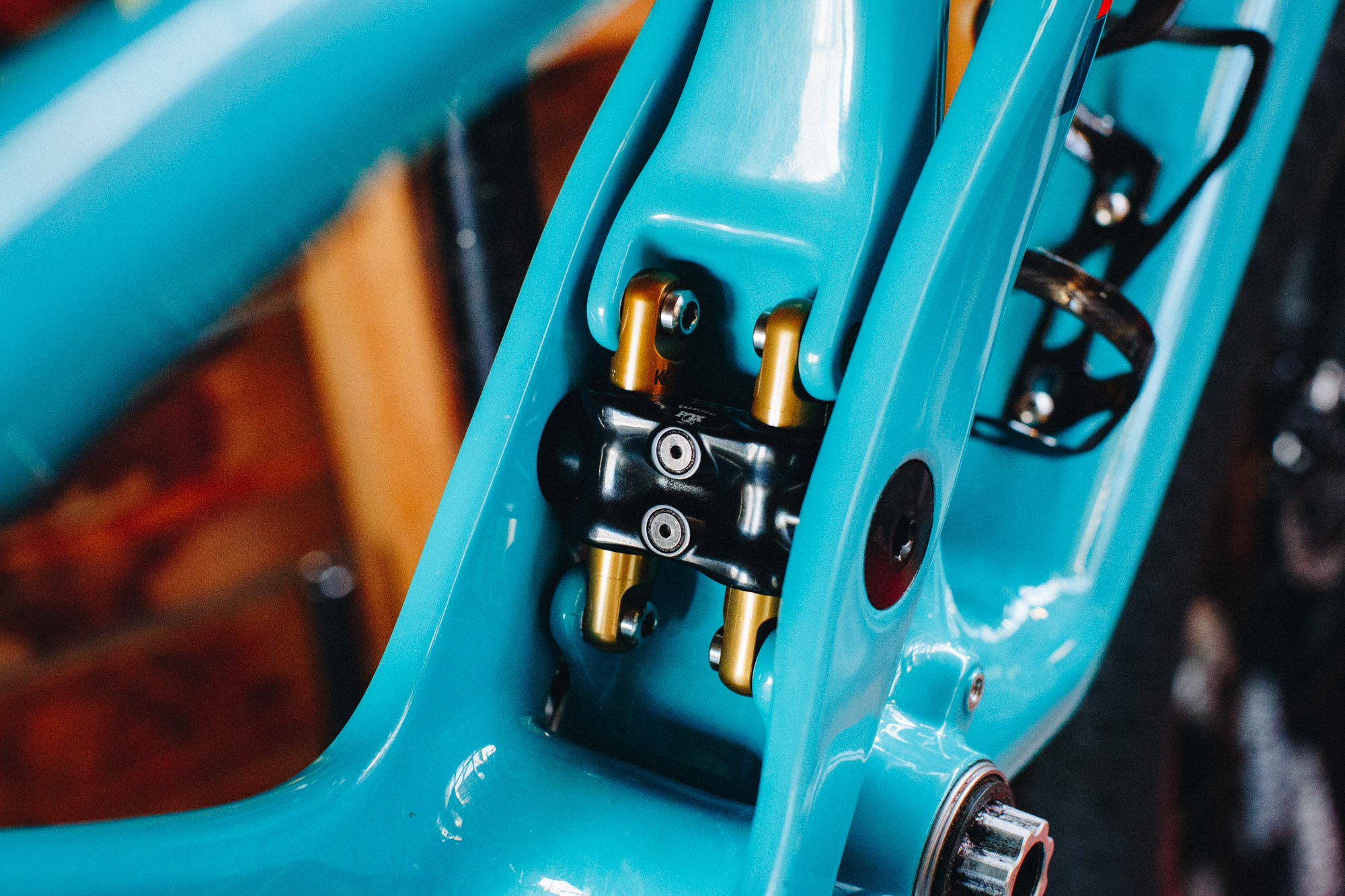 The only thing left to do was to replace the Switch assembly with a new one, which the crew at Rowney Sports happily supplied (these frames have a lifetime warranty, very impressive!) and we fitted it ahead of a solid week of riding.

The brand new part made the rear suspension feel slick and silent, the sliders were moving smoothly without binding, and everything felt tight and secure, but it just wasn’t 100% right. The rear end of the bike simply wasn’t up to scratch, with the level of lateral rigidity not acceptable. Just too much lateral play localised to the Switch area for a bike that begs for hard riding.

On the trail the SB100 has stopped making bad noises, but it’s a little softer in the chassis. This won’t be the end of the world for some riders but it’s just not that impressive, especially coming from a brand like Yeti and considering how solid the bike felt with its original parts.

We didn’t pay for the frame – it’s going back to the crew at Rowney Sports – but if we did, we would not be that stoked. These frames carry an RRP of $4990, about as costly as they come, so we’d expect better. We’re fans of the brand, their bikes, and have had wonderful experiences over many years, from the original 575 to the ASR-5, the early SuperBike range SB66, SB5, and more recently the SB5.5. But this bike has been bittersweet.

We’re keen to try out the new SB130, or 150 while they share a similar concept, the Switch sliders sits perpendicular to the SB100 sliders, and from where we sit that looks like it makes more sense.

We loved riding the SB100, we think it leads the hardcore XC category with its dialled geometry and great suspension, but as you can see, it hasn’t been a trouble-free experience for us.

What are your thoughts, do you share a common experience or a completely different one? Leave a comment below. 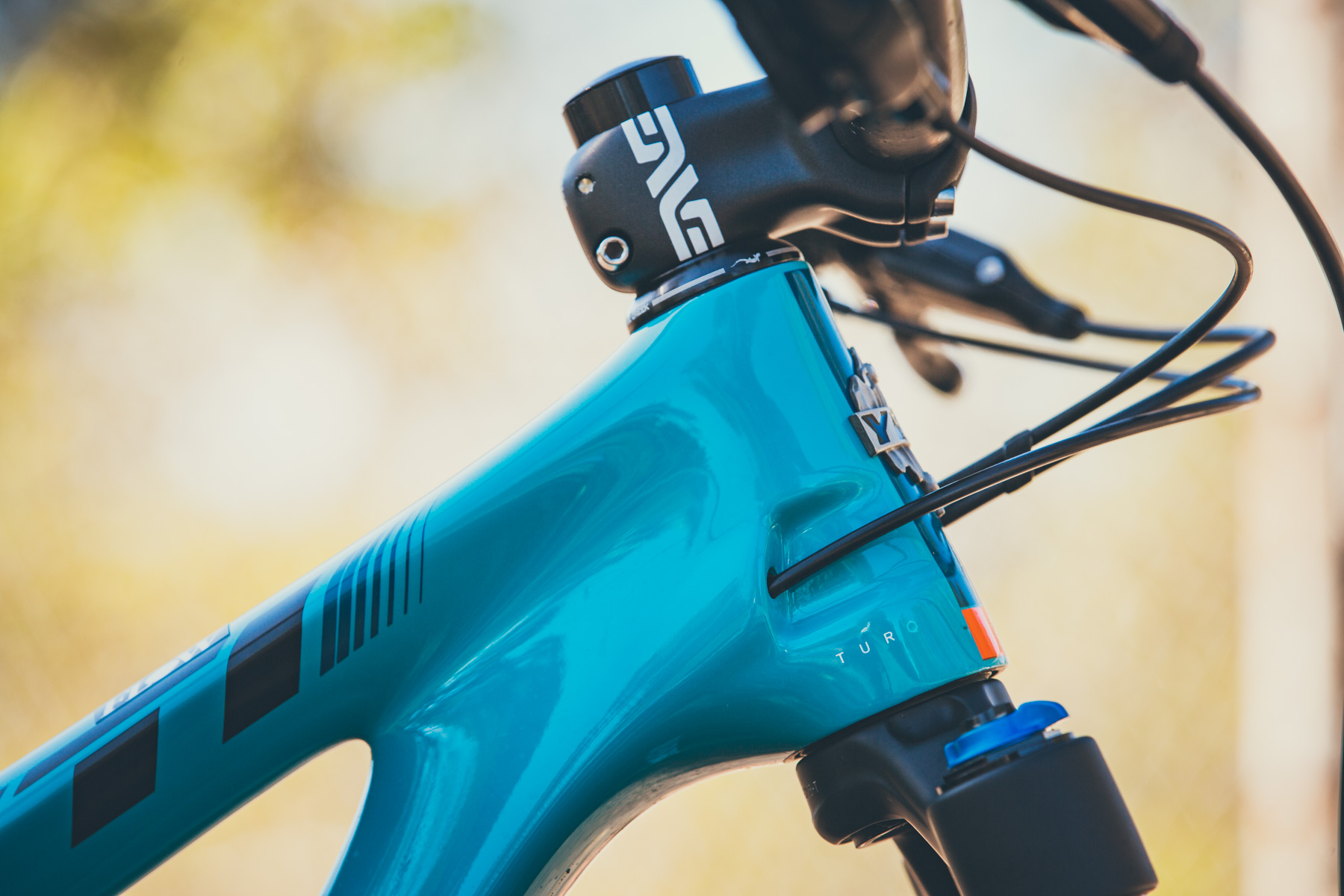